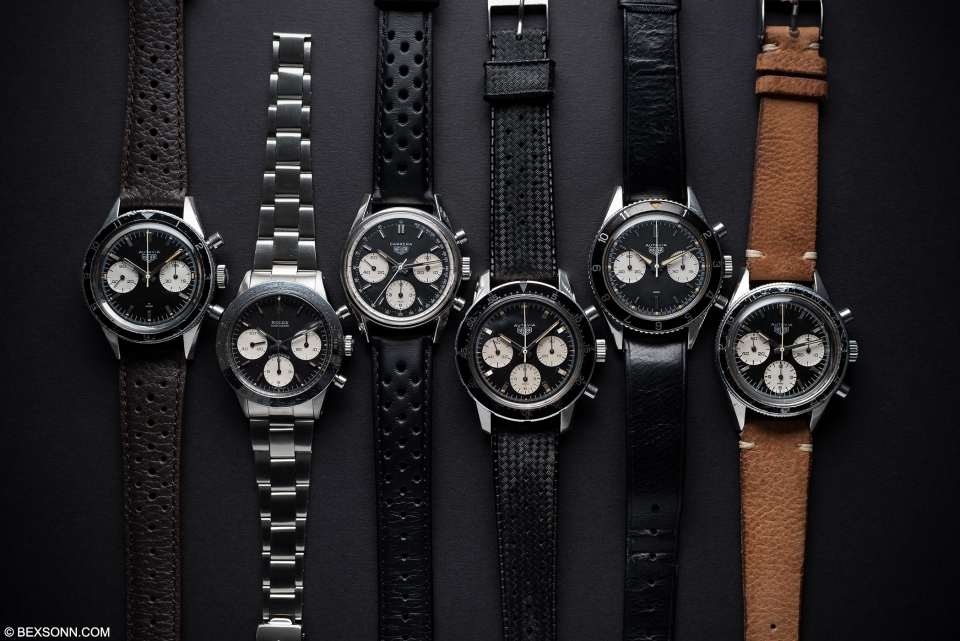 With all the attention pointed towards Geneva this month from the glamour of Phillips to the huge catalogues at Christie’s, Antiquorum and Sotheby’s, it would be easy to forget whats going on here in London. A firm favourite of ours because of the range of timepieces always on offer to suit all budgets, Watches of Knightsbridge is holding their fifth auction of the year this month and we take a look at the lots that caught our eye. Just for a bit of fun, we have themed our picks this week on the ever cool Panda/Reverse Panda dial. 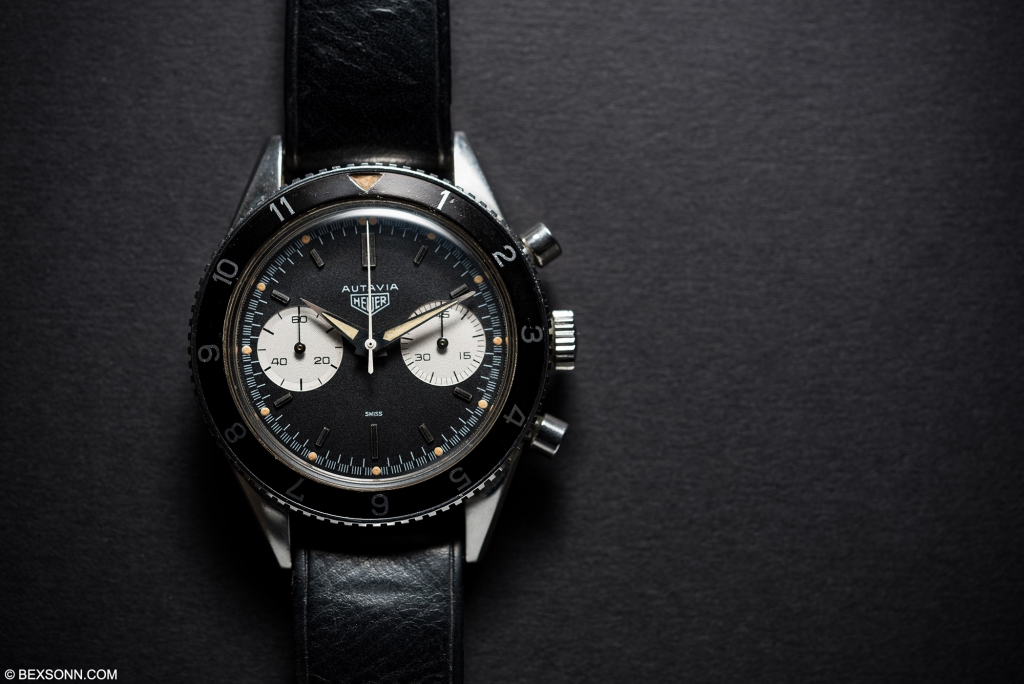 Starting off with a rare bird is Lot 110, a Heuer Autavia 3646 first execution case with second execution dial and hands. The last time Watches of Knightsbridge had a first execution Heuer (2446), it went at a very reasonable price, with collectors lamenting a missed opportunity. I doubt it will happen again as collector eyes will be on this.

We recently wrote about Autavias and a little about the history of it all, so I won’t write too much about it. The Autavia was certainly the line that propelled the Heuer name into the world of racing-inspired chronographs. With its highly legible dial and muscular sporty case, it is no surprise that it was the choice for the likes of Mario Andretti and Jochen Rindt. Furthermore, it was the first line of watches released by Jack Heuer when he took over in 1962 and the Autavia range has largely come to represent his successful tenure at the manufacture.

Often with vintage pieces, collectors highly value the first iteration in a model line, and this 3646 is just that. The first execution cases were smaller at 39mm and the second execution dial on this is distinguished by the steel Dauphine hands and the separated minute and second markers. The earlier Autavias with two sub registers such as this one used a higher quality column wheel Valjoux 92 movement as compared to the later iterations that used a more economical and workhorse Valjoux 7733.

The unrestored dial of this example is in excellent condition, with thick and even lume plots with no visible tarnishing. Furthermore, the bezel is very well-preserved, with even the lume triangle at 12 o’clock still present and aged to a creamy yellow patina. Condition and rarity is everything and this piece is right up that alley. 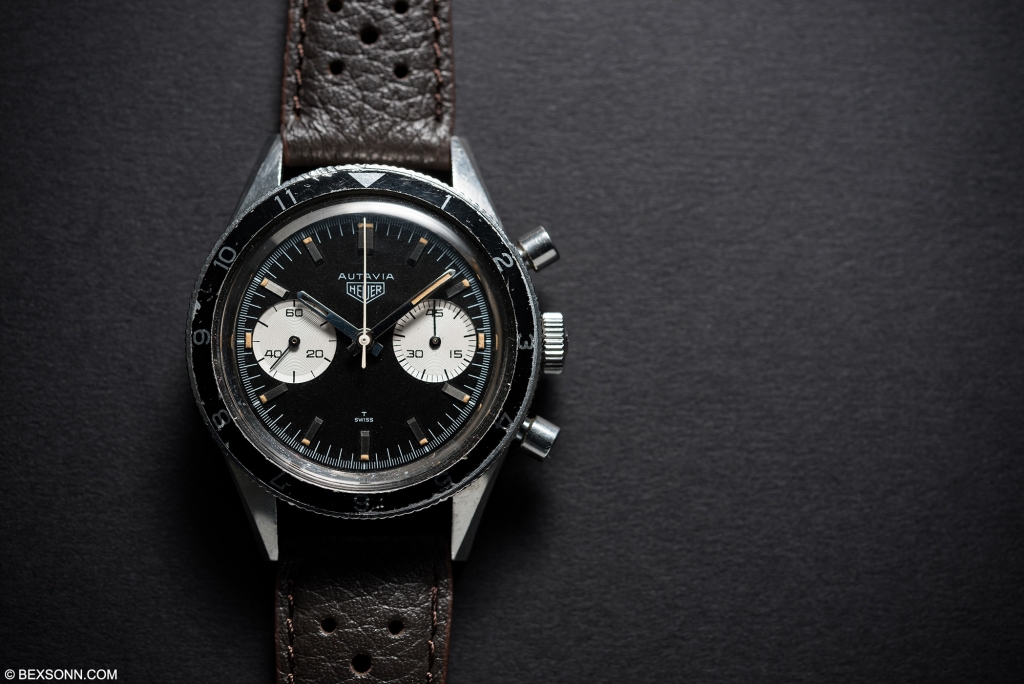 The Autavia 3646 third execution donned the wrist of the Formula One driver Mario Andretti in the 60s and as such is called the ‘Andretti’ by collectors. Along the same lineage as the previous lot mentioned, it is a later variant with a stronger bevelled case.

This is certainly a very honest example, with visible wear to the bezel, loss of lume to the hour hand and minor scratches throughout. That being said, the fundamentals of the watch makes this a great example, most notably the excellent condition of the case. The scratches are only cosmetic, as the thickness of the case is evident through the sharp bevels and the deep Autavia engraving that remains on the caseback. Similarly to the previous lot, as it is an earlier Autavia, it houses the Valjoux 92 movement, which I much prefer.

Interestingly, there is a further deep inscription on the case back, which was roughly done by its previous owner. When I first saw it, I was confident that this had military provenance as I recognised the rough tattoo machine style of inscription. Many personnel in the army who had wristwatches would engrave their military numbers themselves and they are all in this style. When I looked further into the condition report, my convictions were correct. Watches of Knightsbridge states that this 3646 Andretti was originally purchased by an American soldier in 1968 whilst stationed at the Hahn Air Base in Germany. Whether that bears a premium I am not sure, but no doubt it is an interesting story. Regardless, do not let this detract you as on its own, this piece has honesty and is pure quality. 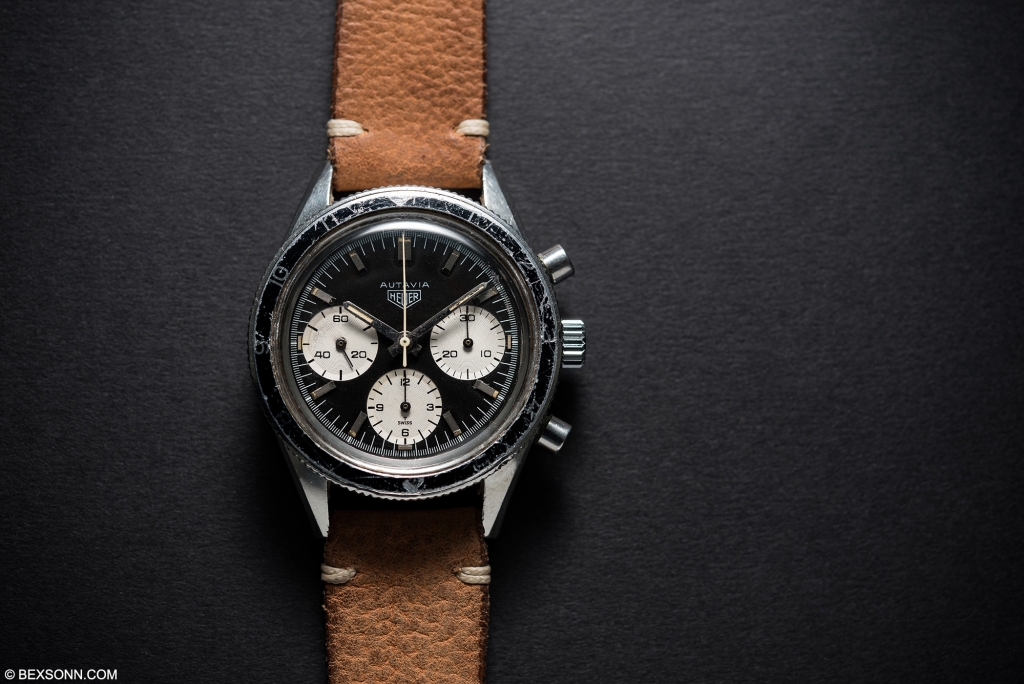 The Heuer Autavia 2446 third execution is famously known as the ‘Rindt’ as it was worn by the 1970 Formula One world champion Jochen Rindt. It is the last of the screw back Autavias Heuer made before transitioning into the later compression cases. What I do wonder sometimes, is how nicknames placed by collectors on timepieces play a role on its value, with pieces such as a Paul Newman Daytona, the Andretti mentioned before or in this case a 2446 Rindt immediately adding to its cool factor.

The easiest way to distinguish a 2446 third execution most of the time, is by the long lume strips at 3,6 and 9 o’clock, just like the Andretti mentioned. At first glance, this Rindt certainly looks beaten up and in a questionable condition. But on a closer inspection, the case appears sharp, with its bevels still apparent. The unrestored dial, similarly has aged very nicely, with the lumes still present and only a slight cracking to the lume on the minute hand. What gives off this misguided impression is the hour bezel that is heavily scratched. While it is true that original Heuer Autavia bezels are hard to come by and does add value, the first impressions that this watch gives off could lend itself to someone getting a bargain for what really is a piece in very good condition. 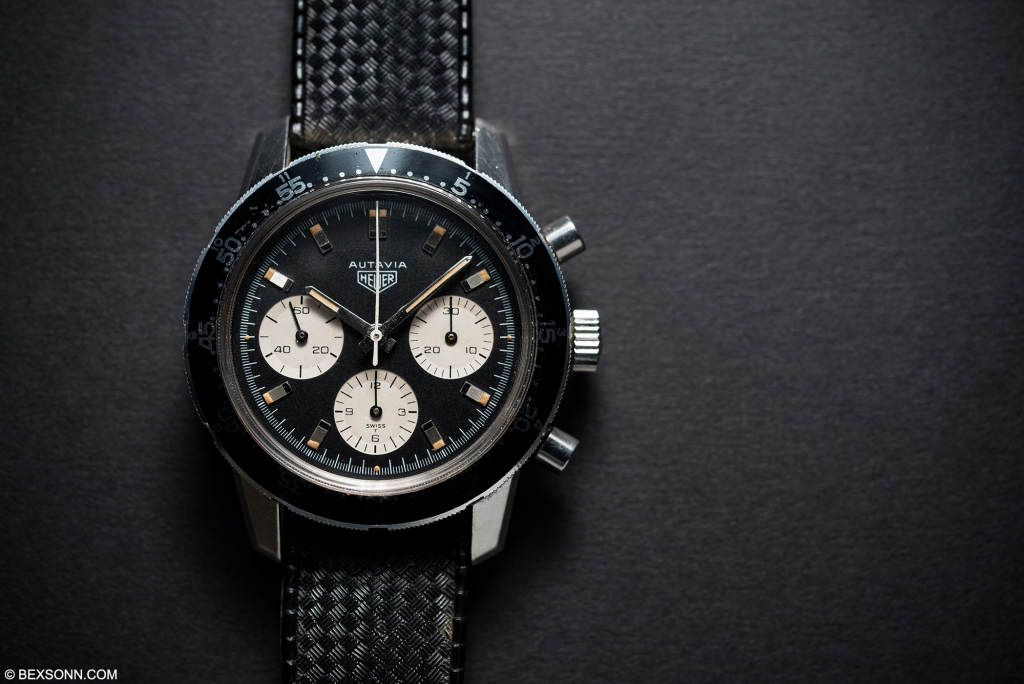 I will say straight off the bat that this Heuer Autavia 2446C is in absolutely mint condition. So far, the quality of the Autavias offered on the whole have been very high. The compressor case Autavias have long been seen as inferior to its earlier screw back counterparts, but within the last year, demand for these pieces have skyrocketed. While the prices of these are still far behind earlier executions, one should always remember a golden rule in buying vintage watches: It is much better to buy a cheaper reference but in excellent condition than to buy a beaten up more expensive piece.

This example has a dial in great condition, with the lumes still very thick and even, matching the patina of the hands. You often find that this style of lume, where it is applied to the end of an applied marker really messed up and blotchy with the small dots at 3,6,9 especially prone to falling off. All the text and the minute track are still crisp on this unrestored dial with  light ageing of the subdials providing some character. The case retains its bevels and remains thick, with the caseback engraving still present. The MH (minute hour) bezel, is another aspect of these Autavias that tend to age very badly, easily picking up dings and scratches (as seen with the 2446 Rindt in this auction). With this example though, it seriously looks untouched with the black paint hardly scratched. 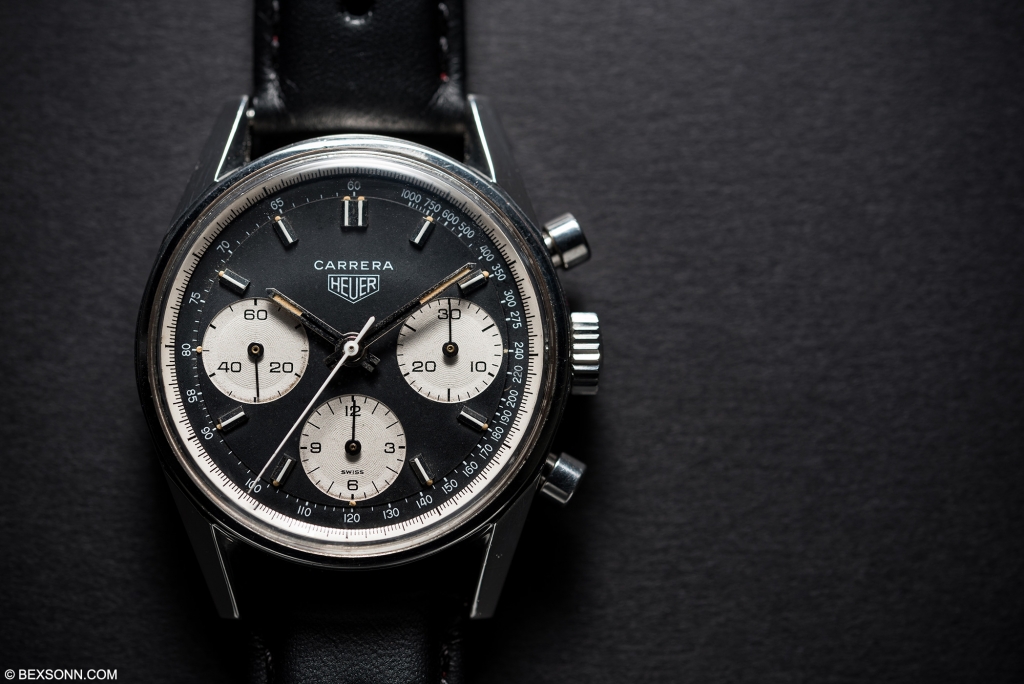 Moving away from the Autavias is Lot 118, a true collector’s piece- the cover lot and much sought-after Heuer Carrera 2447 NST. Launched a few years after the Autavia in 1963 by Jack Heuer, the goal of the Carrera was to create a stylish yet functional timepiece with an emphasis on legibility. The result was a 3 register chronograph with an inner chapter ring and sized at an elegant 36mm. When functionality drives the form of a given timepiece, what you get is something that is truly timeless, perfectly demonstrated by the wearability of the Heuer Carrera even by today’s standards.

This example features a reverse Panda dial, which partly explains the desirability of it. The reference designation (NST) of the Carreras were very easy to remember, with the ’N’ standing for noir (black), the colour of the dial, the ’S’ standing for the silver colour of the subdials and the ’T’ marking the presence of a tachymeter. The reverse panda dial of this piece is a main driver of its overall desirability as collectors have placed a premium due to its striking looks.

All lume plots appears in tact and matches the creamy yellow lumes on the hands. The case remains sharp together with a dial that’s in excellent condition, barring some minor  cosmetic age marks as expected. Powered by the ever trusty Valjoux 72, it has a correctly signed Heuer-Leonidas bridge and a correct signed crown.

All in all, the fundamentals really point towards this 2447 NST as a near perfect timepiece. A classically enduring and collectible wristwatch underpinned by functionality and quality. Oh, and it’s very rare. 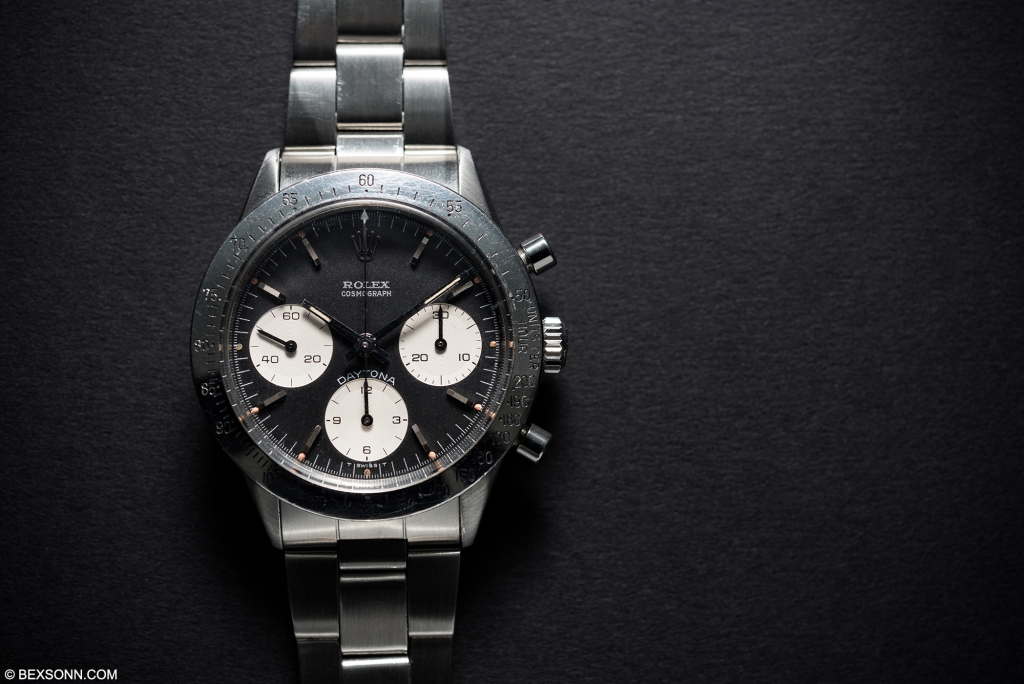 Finally, we move away from Heuer’s and into the old guard: The Rolex Daytona. Now, I’m not usually one to highlight Daytonas, although I like them lot, I feel that the market has given them enough attention. This one though, was interesting enough for me to take a look at as what sets this example apart, is a direct representation of the wild and crazy world of collecting Vintage Rolex. I’m sure all of you know that with vintage Rolex, it is all about the details whether it be an underline here or a double Swiss there, often entailing a sharp increase in market value. This Daytona, features none of that, but instead a strange and peculiar ‘blue’ text for the word ‘Daytona’ on the dial. 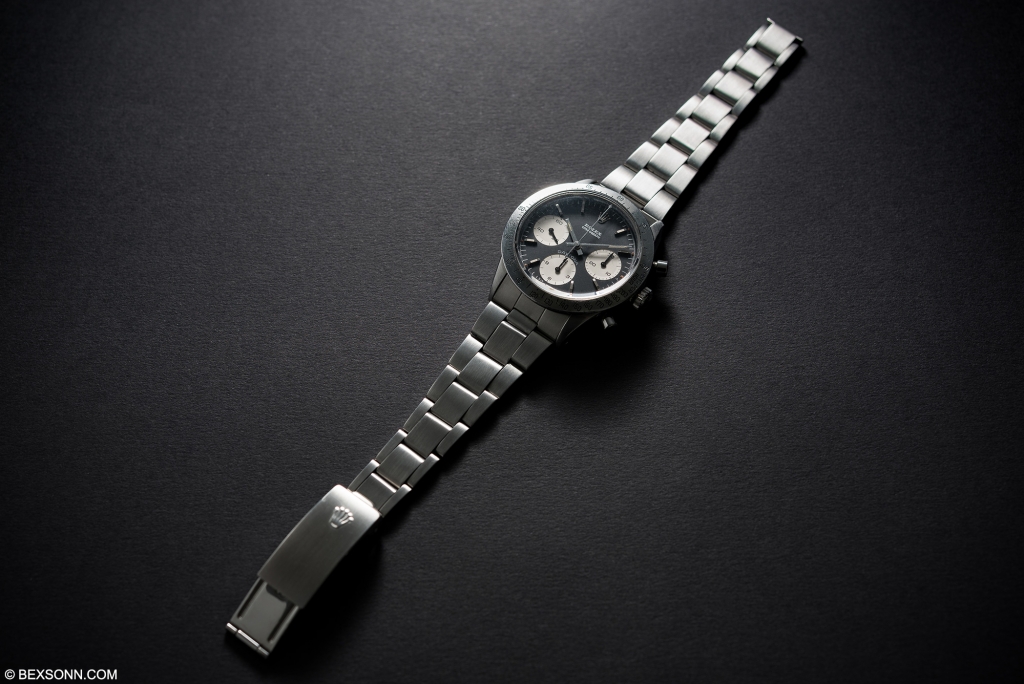 I have to admit, I didn’t even know these existed until it was mentioned as this is really something where you have to ‘look closer’. The blueness is very evident once it is pointed out and it is said that these blue Daytona dials are found only on the 6239 and 6262 pump pusher models. Originally when it left the factory it was white, but due to a flaw in the paint pigmentation it gradually aged to the cool blue you see today. It is interesting to see the production inconsistencies back then, even with varying chemical compounds of white paint used.

This is the sort of little quirk that gets collectors excited, as there is almost a smug satisfaction that ‘if you know, you know’. In terms of condition, there is some loss of lume as mentioned in the auctioneer’s condition report, but nothing drastic with the overall dial and case remaining in excellent condition.

The Watches of Knightsbridge auction will take place on the 19th November 2016 at their Headquarters in Knightsbridge, make sure you visit the official website for this month’s full catalogue.