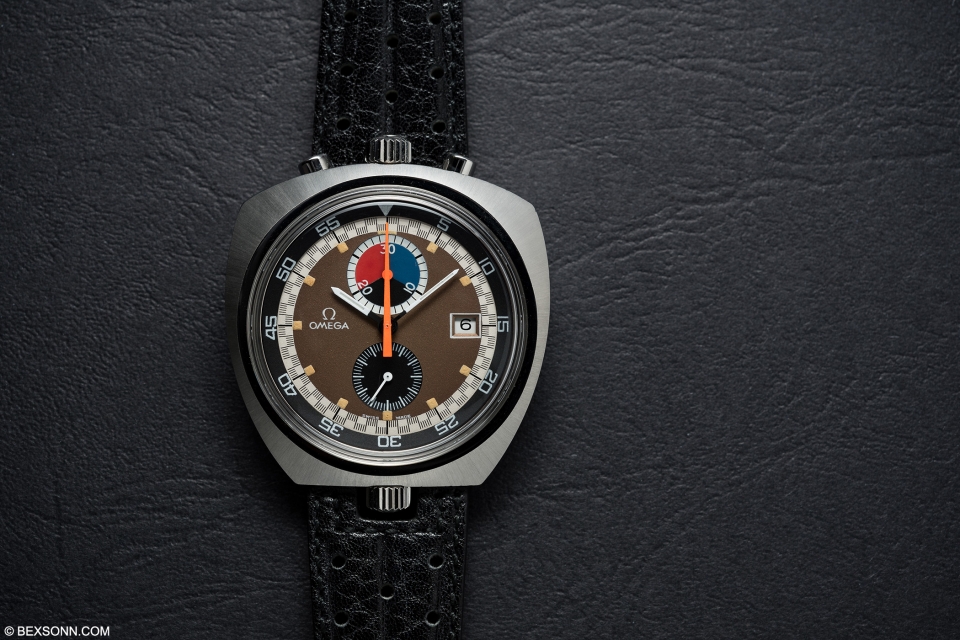 For those of you who were unaware, there was a Watches of Knightsbridge auction last weekend, which in common fashion, we highlighted. There have been a few auctions over the past few years from other auction houses that have taken place in Dubai, and I think it is fair to say they can be a bit hit or miss but that could simply be down to timing. That aside, it would be interesting to see how the lots we highlighted performed and how the overall auction went, so of course we grabbed our popcorn and tuned in. 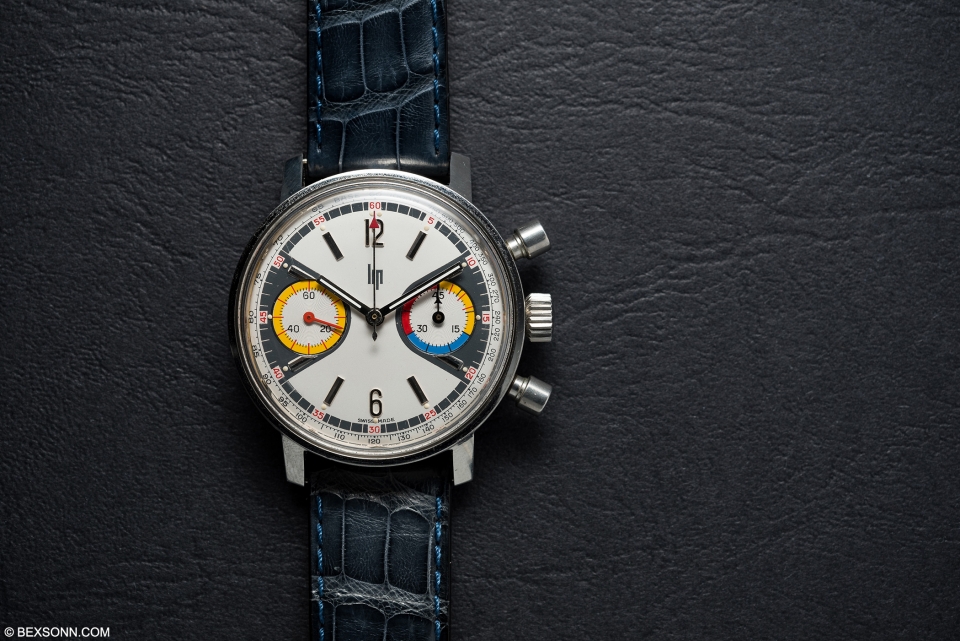 The Lip Chronograph we highlighted, was by no means, a lot you’d ordinarily see us mention but this little timepiece, was an excellent example of what Lip used to do. Powered by a stock Valjoux 7733, this stylish little piece, with a tri-colour dial and traditional 37 mm case got the attention it so deserved. The case on this piece was in immaculate condition and it would appear it ticked all the boxes for some collector out there because when the gavel came down, it sold for a handsome £4,250 – including fees. 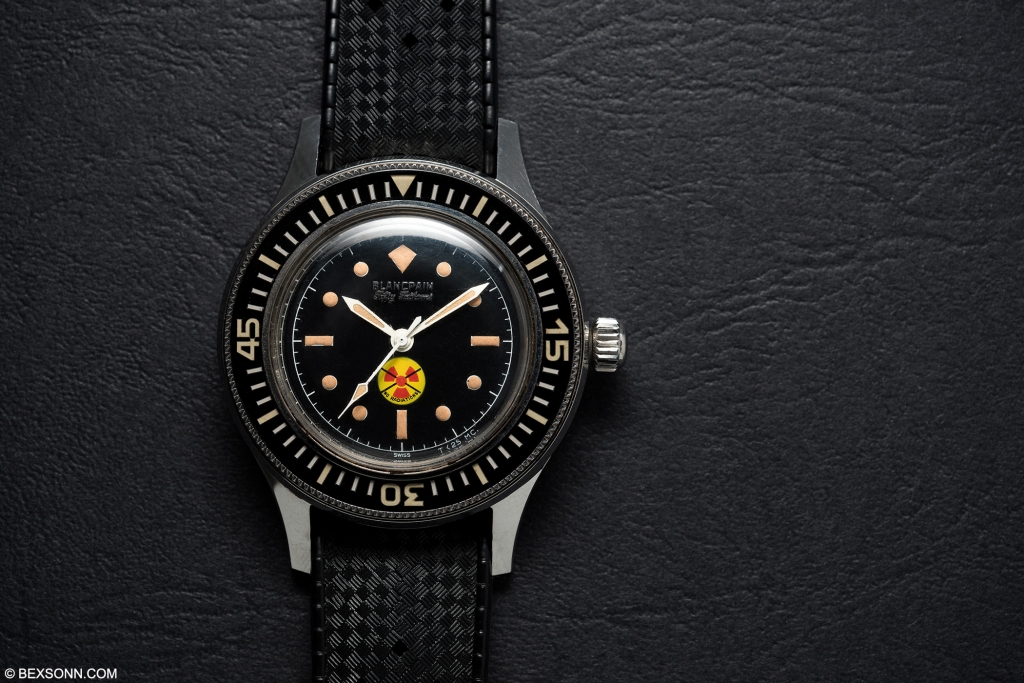 The Blancpain Fifty Fathoms is a watch of legend and this 41 mm civilian example was another lot we highlighted. Like the Lip this piece was in exceptional condition, though less sought-after than it is early 1950s forbearer, that bore the rather cool “no radiation” symbol. Admittedly, this example looked rather fitting on the tropic strap and it would seem we were not alone in our thoughts, as when the hammer fell, it sold for £18,750 all in. 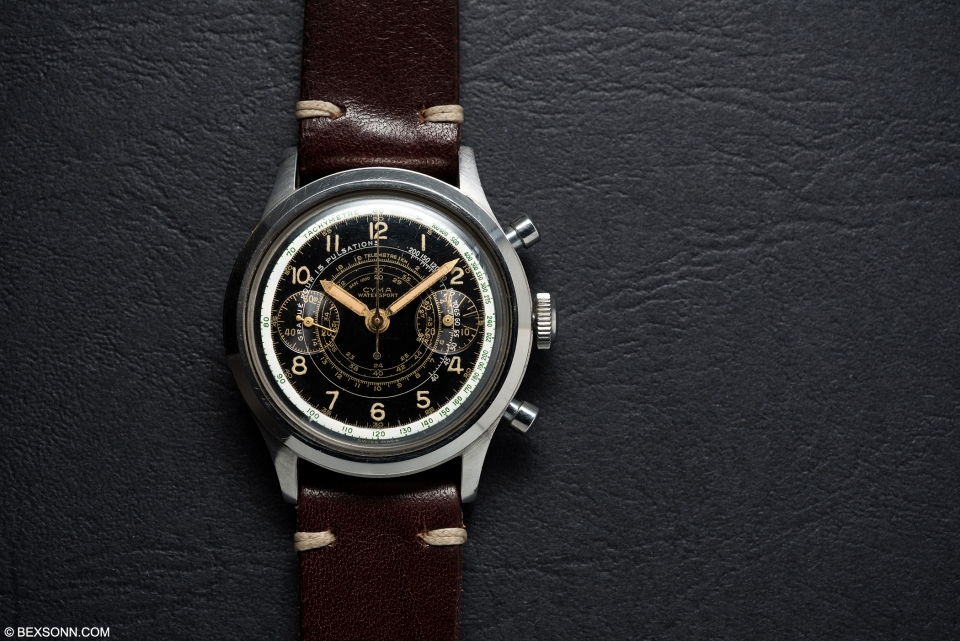 Without doubt, vintage chronographs are popular but right now there seems to be more of a trend as to what constitutes as a good vintage chronograph. CYMA chronographs have seen a massive rise in popularity and of course as a by-product a hike in their valuation. This CYMA was perhaps as good as you are going to get right now, it featured a beautiful black gloss dial, with Arabic numerals, with multiple scales and a 38mm clamshell case, all backed up with a Valjoux 22 movement. The hammer price – well – let’s just say, we weren’t that surprised. Hammer price – £13,750 including fees. 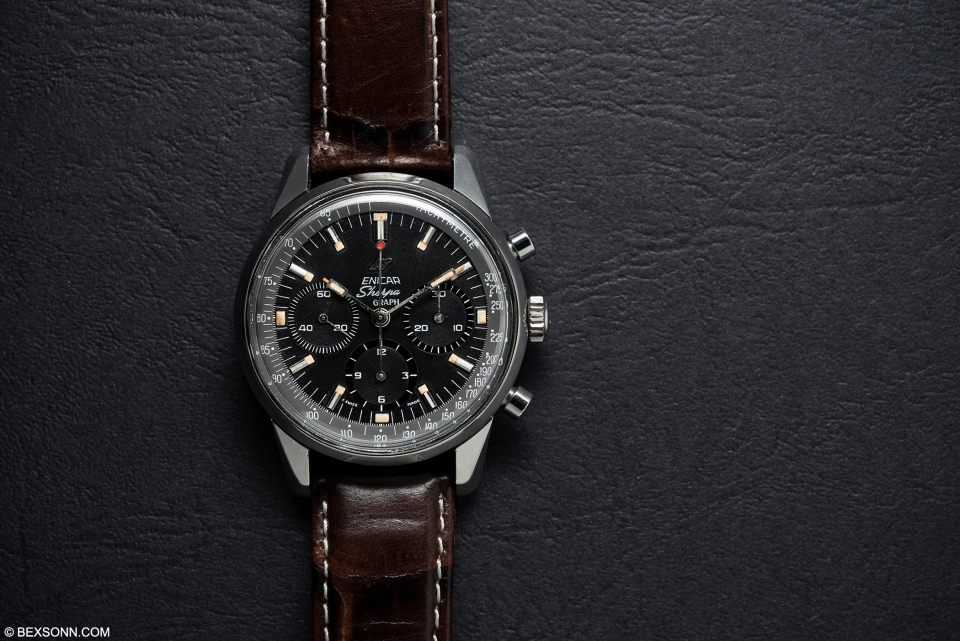 Okay, so this lot kind of surprised us from the beginning, not because it was the rarer Enicar Sherpa Graph, quite the opposite. We know that Sherpa Graphs have become very popular over the last few years but we also noticed that there has been a bit of softening of prices too, simply because more and more have come to market. That said, as we mentioned, you just can’t predict what will happen at auction and of course which way the market will head but for now, there’s no doubt the demand is still there. Hammer price – £10,625 including fees. 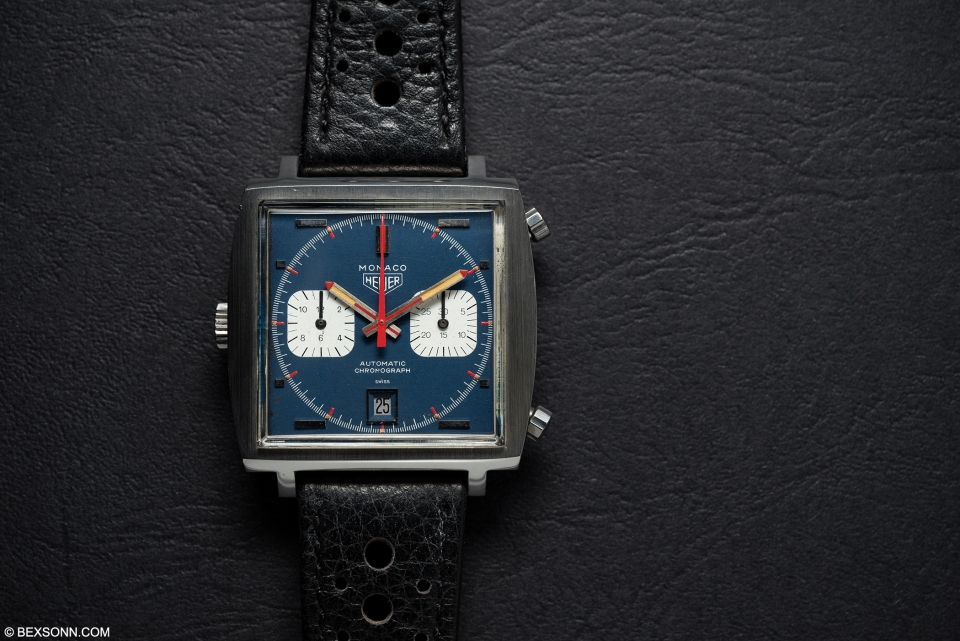 The Heuer 1133B, the famed timepiece once worn by Steve McQueen on-set while shooting Le Mans. The Monaco, as mentioned, is a fairly mature market, when it comes to vintage Heuer. However, the buzz around the Monaco is perhaps not as lively as that of the Autavia and the Carrera are right now. That said, the Monaco can still hold its own in an auction but probably not at the lofty heights as the aforementioned range. With a hammer price at the lower end of its estimate, does this indicate the demand for Monaco’s isn’t what it once was? – remains to be seen but when the gavel came down on this example, it sold for £10,000 all in. 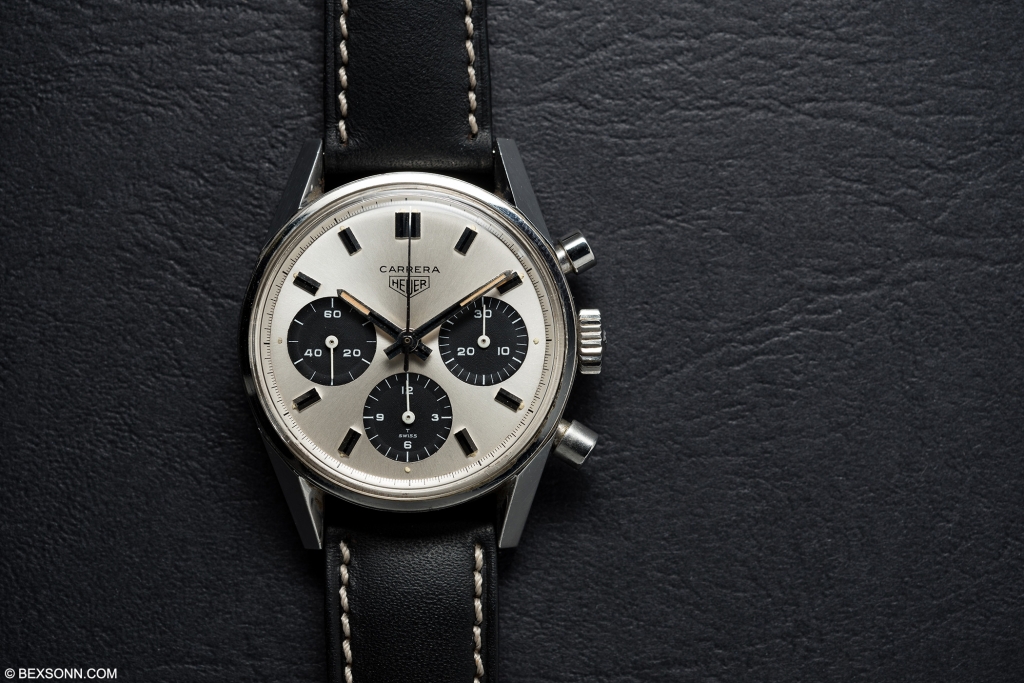 With the Monaco doing moderately well and with the current buzz surrounding the Autavia and to a lesser extent the Carrera, how would this seemingly rare variant  bearing the marquee Heuer name perform? Admittedly, before the auction started I was sceptical about how this would do. You see, the 2447 SN (Silver Noir) is one of the rarest variants of the Carrera and is subjectively one of the best looking too. Nonetheless, I still had my doubts whether this would even breakthrough its lower estimate but its hammer prices definitely indicates the demand for Carrera’s has not waned one bit. Hammer price – £27,500 including fees. 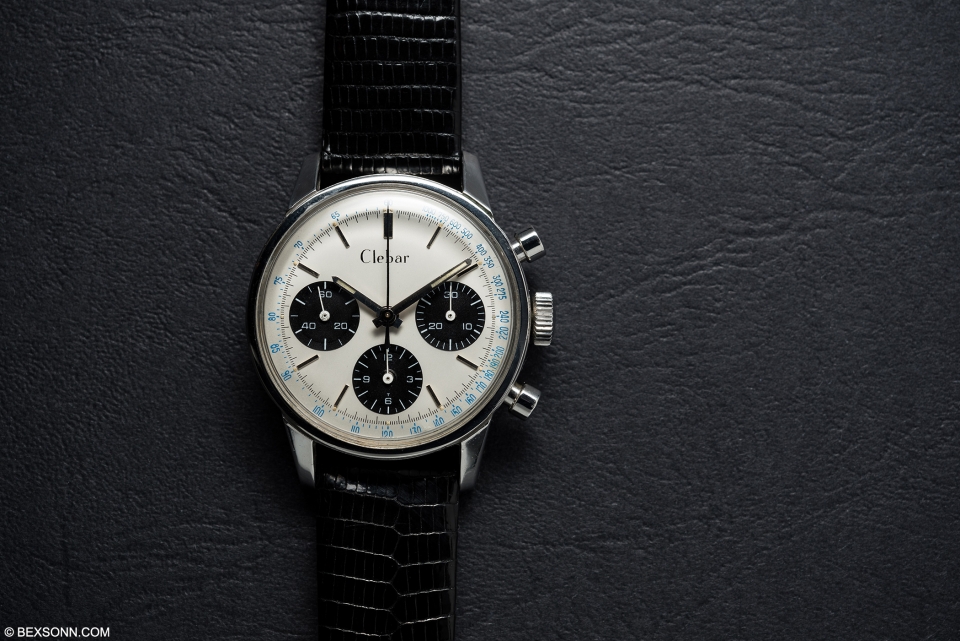 Then there’s this Clebar, dubbed the ‘Poor Mans Heuer’, which shares uncanny similarities to the 2447 SN that sold for a pretty penny. It even shares the same movement: the Valjoux 72 but of course what they definitely don’t share is their value. But lest we forget, Clebar’s aren’t as common as one may think, so it was good to see this beautiful example sell for £5,500 – including fees.

Last but not least is Lot 104, the Seamaster ‘Bullhead’ chronograph. This is an unusual watch that’s definitely an acquired taste that falls squarely into the category of love it or hate it. That said, they are somewhat rare, as it is estimated that only 600 of these were ever made but more interestingly, only 200 of those were made with a bronze dial – such as this one. On top of that, this particular example was delivered to the US Sixth Fleet and US Sea Transportation Service in Europe. That said, it would appear it was mostly unused. By now you must be thinking this lot performed pretty well, considering its provenance and the fact we used it as the article image header, right? Wrong. Unfortunately this piece just missed out on being sold and was passed in the auction proceedings. I’ve no doubt this watch will find a new home but it would appear for now the demand for them are just not that great, yet. 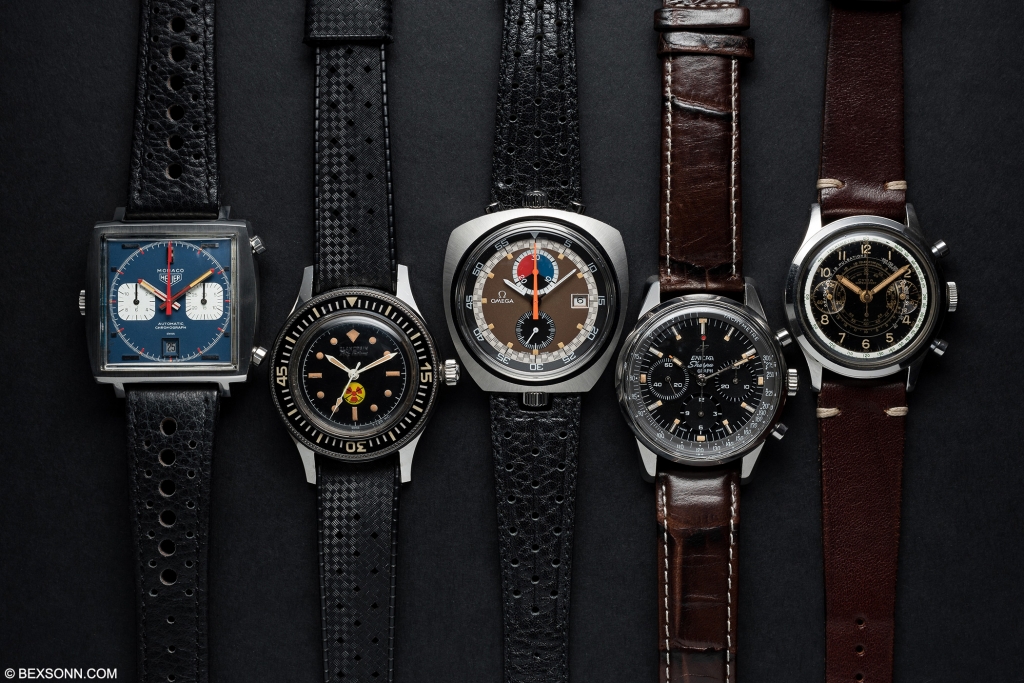 Overall, the auction was good, with most of the lots we expected to do well, actually doing well – bar the ‘Bullhead’. Heuer’s at auction just seem to keep matching and exceeding expectations, although it would seem the Monaco’s have taken a bit of backseat to Carrera and Autavia. That said, I was surprised at some of the vintage lots that were passed, in my honest opinion, had this auction taken place in London a large number of the passed lots would’ve sold. Is it too early for vintage timepieces in this market space? I don’t believe so but perhaps it is for the lesser known and long forgotten vintage brand. However, the auction was definitely an improvement upon last year’s inaugural Dubai auction. 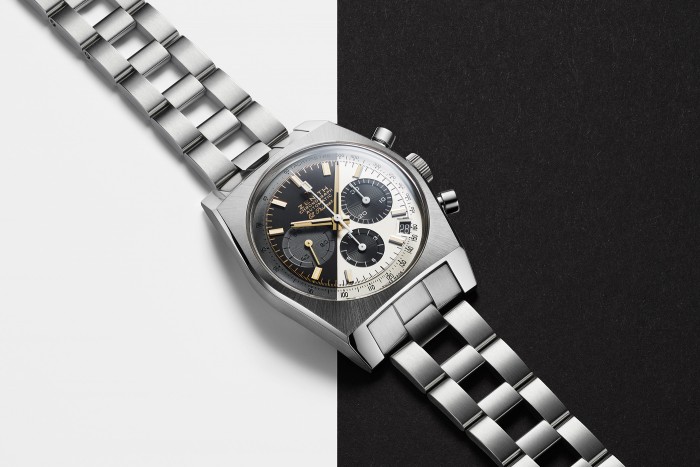