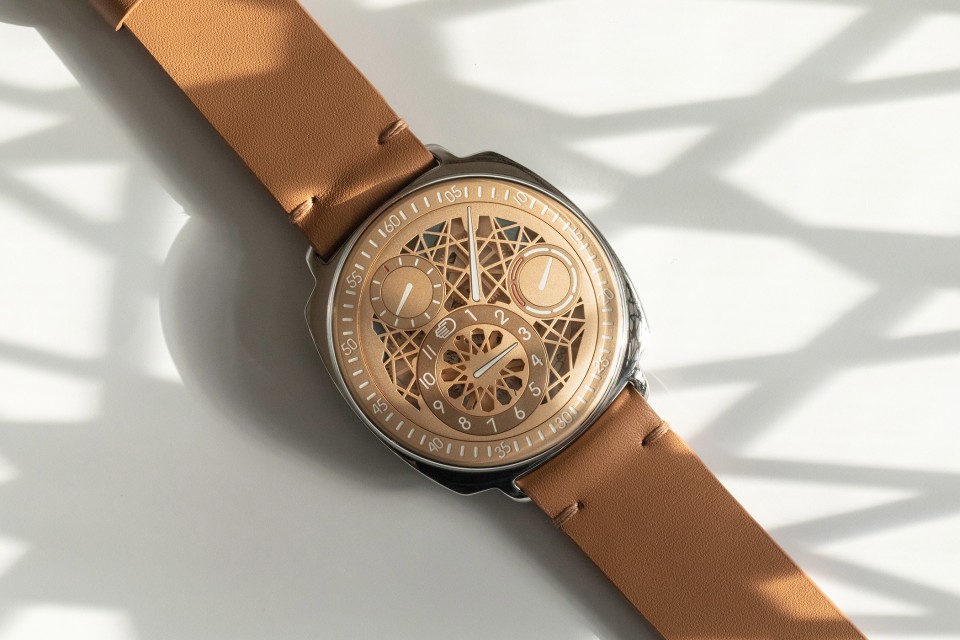 A couple of years ago Ressence introduced, arguably, one of our favourite pieces: the Ressence Type 1 Squared. We loved it instantly and admittedly couldn’t wait to get our hands on it. This year at Dubai Watch Week, Ressence announced the undeniably gorgeous limited edition Type 1DXB made in close collaboration with Ahmed Seddiqi & Sons, the UAE’s leading retailer of luxury watches and jewellery. I’ve said it before and I’ll say it again – Ressence is perhaps one of, if not the most, ground-breaking horological marvels of the 21st century. While it is obvious one cannot reinvent the wheel, you could say that what Ressence have done is reinterpret the way it rotates. It is ingenious but what makes the Type 1DXB even more desirable is its newly formed dial structure.

Type 1DXB draws inspiration from Arabic geometric patterns, believed to unveil the underlying reality to the viewer. This traditional design composes with natural light and creates unique shadow play. It is an Arabic take on skeleton dials.

The watch remains 100% faithful to the functions and movement of its parent, the Type 1 Squared. It differs distinctly from the collection both in its design and in its material though. The Type 1DXB makes use of a display system we’ve seen before in the Type 3 and Type 5. Based on the dial layout of the Type 1, which displays hours, minutes and seconds, as well as a weekday display. The hands and indexes are white and filled with Superluminova punctuating a decidedly traditional but fresh look, however, what is most certainly welcomed is the sandy hue skeletonised dial design.

The Type 1DXB makes use of Ressence signature “Beyond Hands” innovative dial display system. The single surface dial that sits beneath anti-reflective domed sapphire crystal, is constructed out of German silver (coated in sand coloured PVD), with 3 biaxial eccentric satellites – which are rotated by the ROCS 1 mechanism (Ressence Orbital Convex System). That said, what you will notice is the minute disc is of course the largest, but this was no coincidence. Ressence chose to focus on the minute disc, mostly because this is the information you look for first when checking the time but above all because of legibility.

The 1DXB doesn’t stray too far from the other Type models in the collection; however, it is distinctive and makes use of a material Ressence haven’t used on the Type 1 squared before: polished grade 5 titanium. The 41mm cushion shaped case has been formed from the intersection of 6 spheres, which gives it a much-welcomed, understated look.

The Type 1DXB is physically driven by the ROCS 1 module that has been updated with a quickset say function and is directly connected to the minute axel of the base movement. In this case, it is the heavily modified ETA 2892 ébauche, with some 107 extra components added atop of the base movement – making it practically unrecognisable.

The Type 1 squared is perhaps one of my favourite pieces from Ressence and in my humble opinion it is a gorgeous timepiece. Somehow, every now and then Ressence finds a way to make their watches even more appealing and this is exactly what they’ve done with the 1DXB. Collectors often bemoan the lack of innovation, but I think the Ressence as a brand is just that. As I’ve already mentioned, Ressence timepieces all display the time, and some of them a bit more than just that, but what sets them apart is the way in which they’ve chosen to display it to you. The Ressence Type 1DXB is formed out of beautifully sculpted pieces of titanium and German silver, that affords not only an industrious appearance but also plays on the few classic watch notes, that make it even more appealing. Ressence timepieces are unconventional and for this, I can only applaud what they do.

The Ressence Type 1DXB is limited to 19 pieces (which have likely all sold out already) and it is priced at 22,500 Swiss francs. For more information on the new Type 1DXB, visit the official Ressence website.