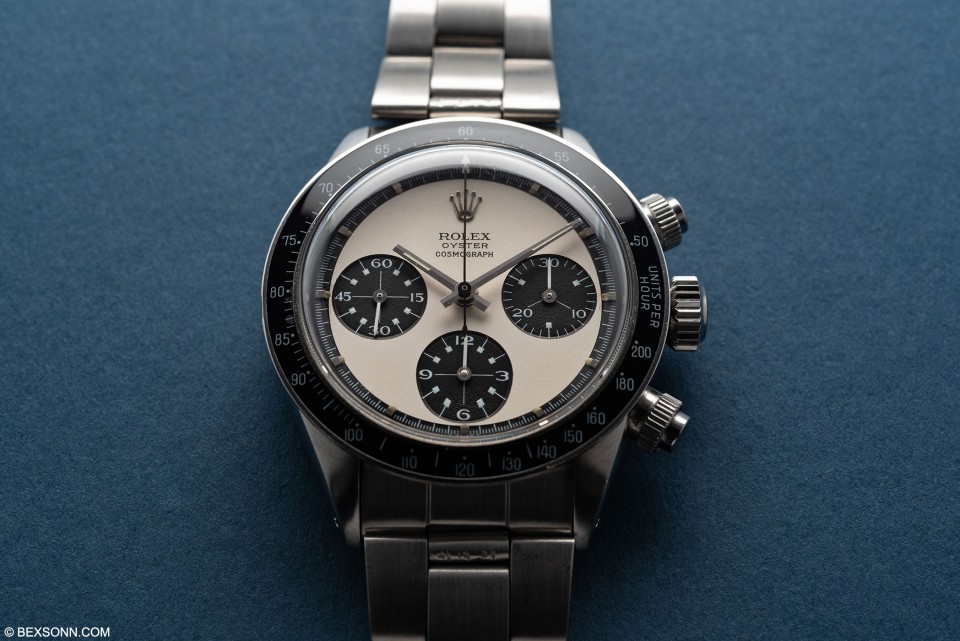 Now that the Geneva watch auction weekend has come to a close and Phillips Geneva Watch Auction: Eight is done and dusted, in typical fashion, we thought it would only right to observe how the lots we highlighted performed. By now we are all familiar with records being set and surpassed every time we attend any of Phillips watch auctions and while this weekend was no different, there were signs of a softening in the market. That said, the Phillips tent at La Reserve was full indeed, with very few empty seats. Ordinarily, there was some fierce battling done in the room, on the phones and online but there was a nice ebb and flow to the auction, perhaps in part owed to the earlier start of 5pm. 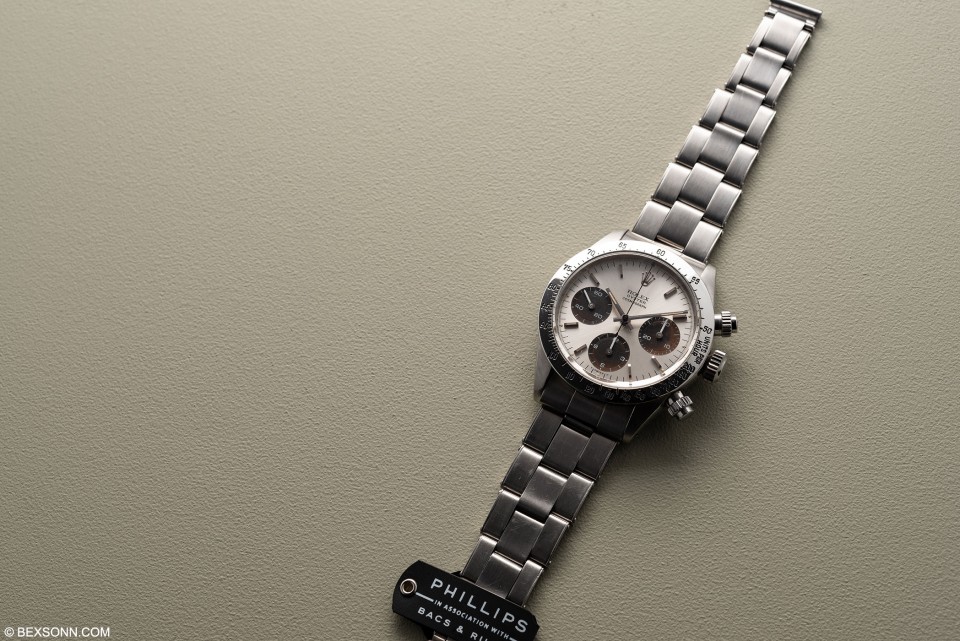 One of our early highlights up for auction was this early Daytona that perhaps to the layperson just another Daytona but look carefully and you would’ve noticed its black chronograph registers have turned a rich tobacco tone, with some areas of the sub dials at 3 and 6 o’clock displaying lighter hues of cappuccino. Each register had aged differently, giving this 6265 a rather unique character. Also, the dial didn’t feature the wording “DAYTONA” which denoted this was an early execution. Furthermore, the case had been rather well-preserved but just how much of a difference did these details make? Enough, selling for CHF68,750. 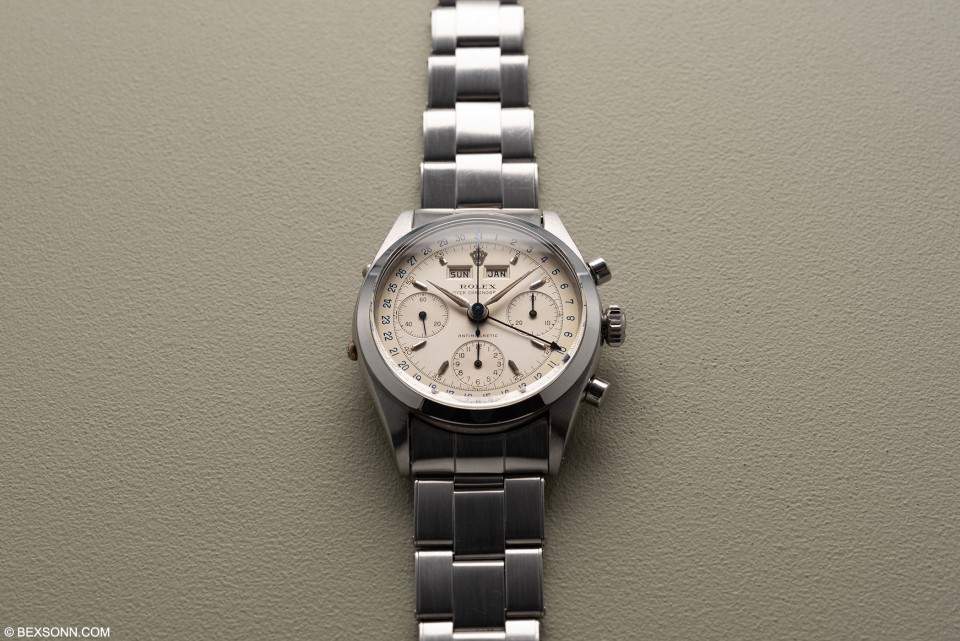 Lot 42 was this The Rolex “Jean-Claude Killy” Dato-Compax 6236 that was in outstanding condition but moreover, it had a little bit of interesting auction history. Originally in the collection of Gordon Bethune, who was CEO of Continental Airlines from 1994 until 2004, when he retired. Mr. Bethune was known to be quite the watch collector and so in 2012 he put 50 of his best watches up for auction and this 6236 was one of the highlights, at the time breaking the record for any reference 6236 ever sold at auction ($638,500). A record that it still holds today but will it be able to eclipse it? It did indeed but not massively, hammering at CHF702,500. 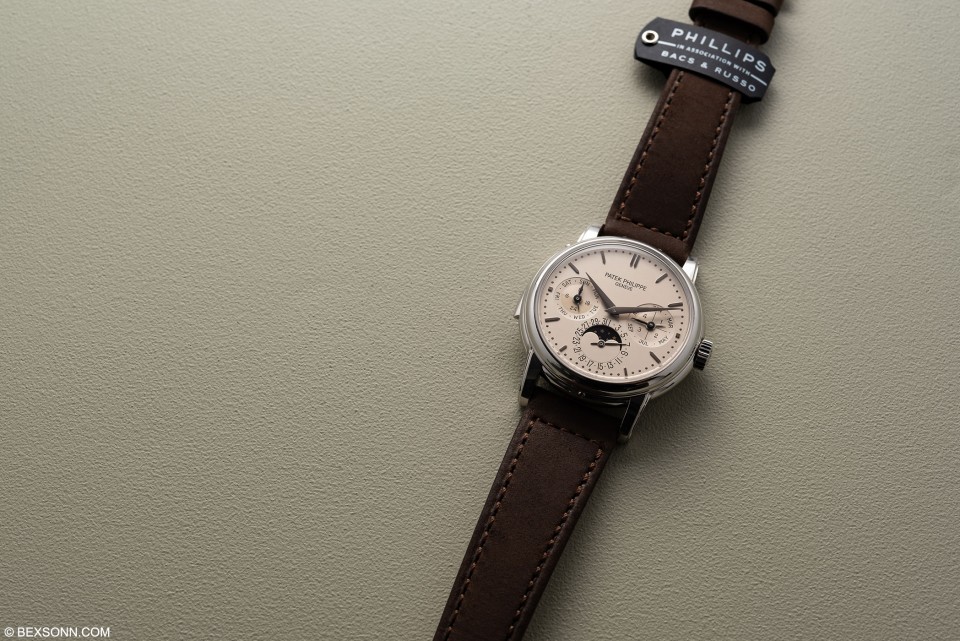 As mentioned, fellow contributor, Sean Song and I are big fans of the perpetual calendar moon phase 3940 that Patek introduced back in the 1980s, while Patek were under the stewardship of Philippe Stern. However, not many are aware there was also another piece introduced in the late 90s, made in the same vein to celebrate Patek’s 150th anniversary but featured an extra complication. The minute repeating perpetual calendar moon phase reference 3974. Featuring the in-house self-winding calibre 27RQ, with minute repeater, perpetual calendar, 24-hour indicator and phases of the moon – it was quite simply the most complicated wristwatch in the world when it was launched. However, Patek Philippe discontinued the 3974 in 2000, giving a lifespan of 11 years but given how complicated the 3974 was to make it is estimated that no fewer than eight known examples were produced in platinum, making it extremely and by virtue one of the most expensive lots of the auction – hammering at CHF1,032,500. 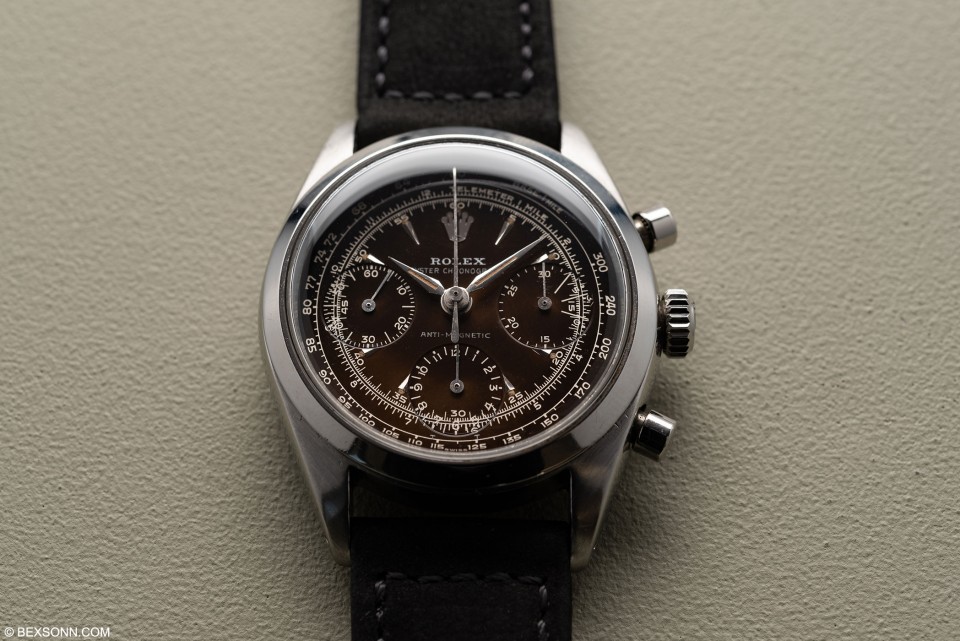 Lot 86: The “Father” of Daytonas. As mentioned in our highlights, “there are 6238s and there are 6238s, of which this is the latter.” This 6238 was special, the ‘tropical’ nature of the dial, which had turned it from a deep piano black to a warm, tobacco glow added distinction but this example offered a little bit more. This particular 6238 featured a dial from that transitional period but also had a seldom seen nuance too. The Ts on this example didn’t flank the wording “SWISS” but instead were suspended above the tach-o-meter scale. Likely done this way because of the scarce space either side of Swiss. While this was something Rolex produced off-the-cuff, it gave the collecting community such rare example and of course the collectors responded with a final hammer price of CHF492,500. 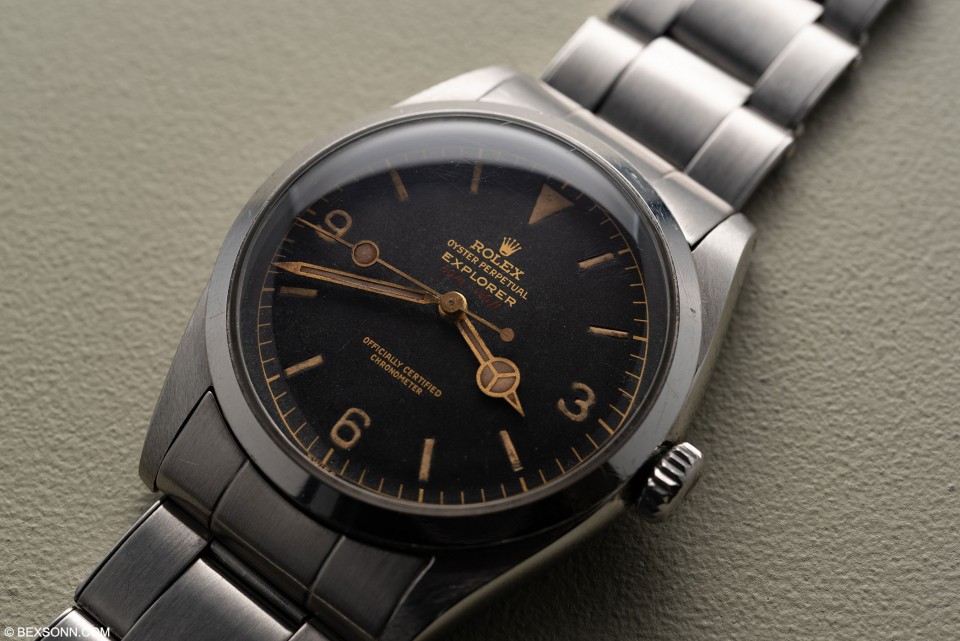 Lot 95 was a Rolex Explorer 6610 but of course this was no ordinary 6610. This Explorer 6610 featured the classic black glossy, gilt dial and 3-6-9 hour numeral layout that defined the Rolex “Explorer” model. The reference 6610 is unusual for their standard gilt lettering and “Officially Certified Chronometer” designation. But as mentioned, this was no ordinary 6610 Explorer. What truly made this 6610 extremely rare and highly collectible, is the red depth rating just below the gilt Explorer designation – something seldom seen. Furthermore, it came complete with box, papers, guarantee, hang tags and chronometer certification, which all contributed to its realised priced of CHF65,000 – not too shabby. 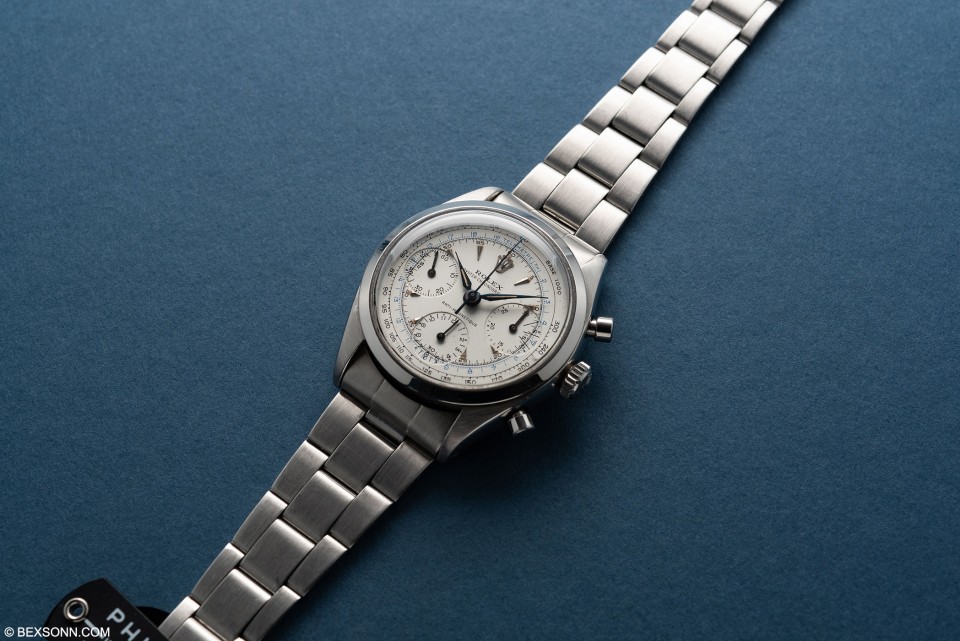 The “Godfather” of the Daytona, the reference 6234 Oyster Chronograph. This example featured a white dial, that had a warm patina to it, with vibrant blue telemeter scale and matching hands, which were stark in contrast but worked very well. That said, perhaps, the most important thing to consider when collecting anything, is condition and this 6234 was absolutely immaculate. The stainless-steel case not only appeared but felt well-preserved, retaining its sharp edges and surfaces. A contributing factor to its realised price of CHF87,000 – more than double its higher estimate after fees. 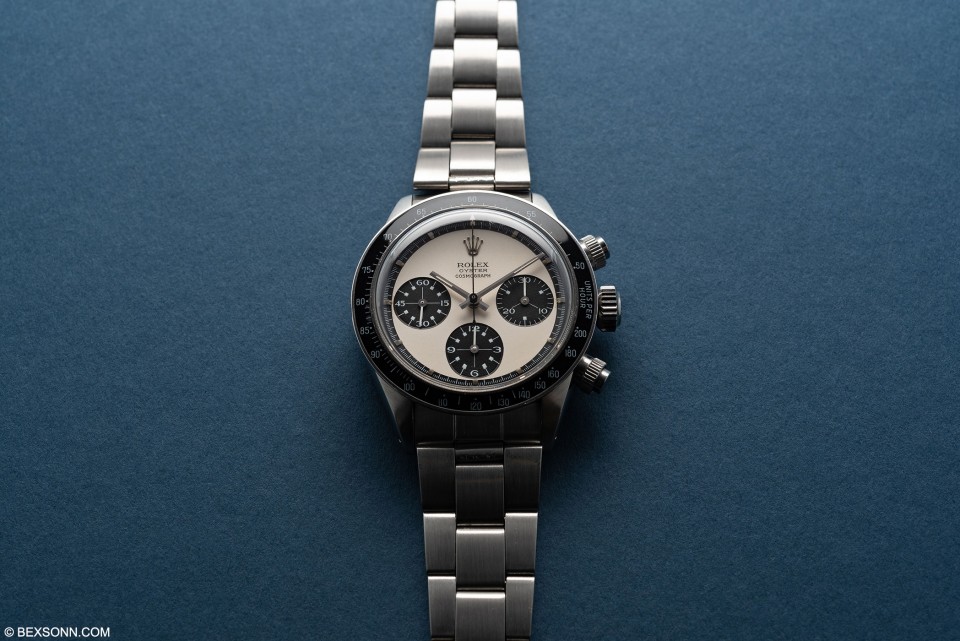 Lot 215 was a ‘Paul Newman’ Daytona ref. 6263. While exotic 6263s aren’t particularly rare, this particular lots condition was rather outstanding. This example featured a MK2 “Panda” dial that was exceptionally clean and sharp, with some nice patination to match its age. But what made this 6263 standout even more was its condition. Featuring a well-preserved case as well as original ‘millerighe’ pushers, correct bezel and bracelet. Even more, it was offered with its Rolex guarantee dated July 27, 1972, along with original box. All these details made the difference, and this was reflected in its realised price of CHF444,500. 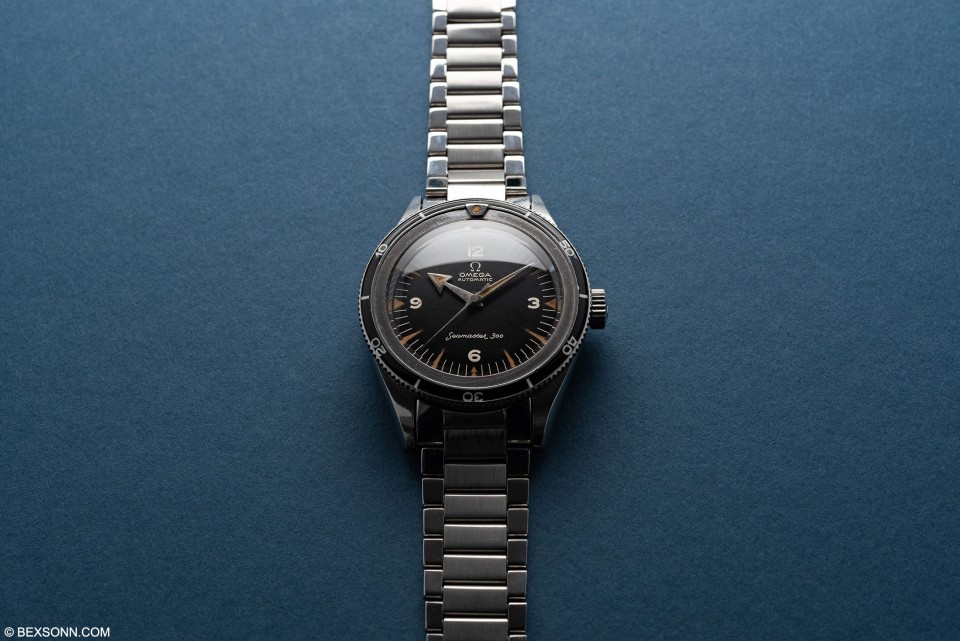 As mentioned, the very first Seamaster ref. CK2913 was introduced to be a divers much-needed companion but it also became rather sought-after. It had all the attributes that any diver would need, packaged in a very stylish watch that later became iconic. This 1959 Seamaster 300 featured everything one could wish for, Naïad crown (something Omega also used on the Railmaster and Speedmaster), excellent case, a dial with a nice build-up of patina on the luminous markers and famed “Broad Arrow” hands. Even the fragile bakelite bezel, which was prone to shattering remained intact, which all played a part in its realised price of CHF50,000 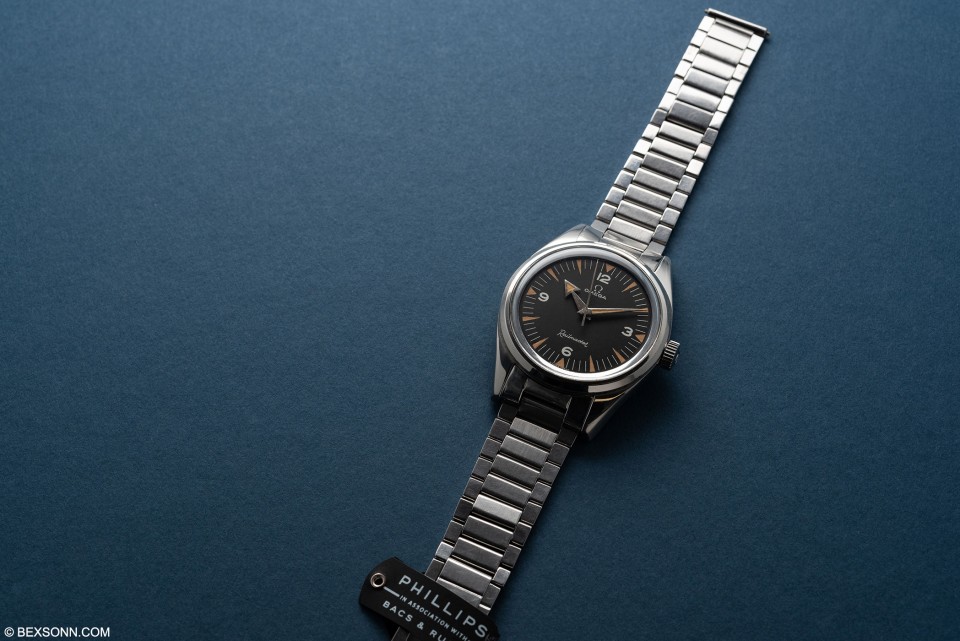 The Railmaster CK2914, as noted, was designed as a tool watch; it was simple yet elegant but had a particular purpose. The double-case anti-magnetic watch was specially designed for scientists, technicians or anyone who worked close to electrical fields. However, one thing that maligned the Railmaster, was its relatively short production run, of course starting in 1957 but ending in 1963, something that didn’t affect its trilogy counterparts. Because of its somewhat short production run, this makes the Railmaster one of the rarest pieces of the trilogy but not one of the most collectible. This Railmaster was made in 1957 and delivered to Australia, as noted by its Omega archive extract, and like the Seamaster 300 above, was in excellent condition. On the night, it sold for a realised price of CHF47,500. 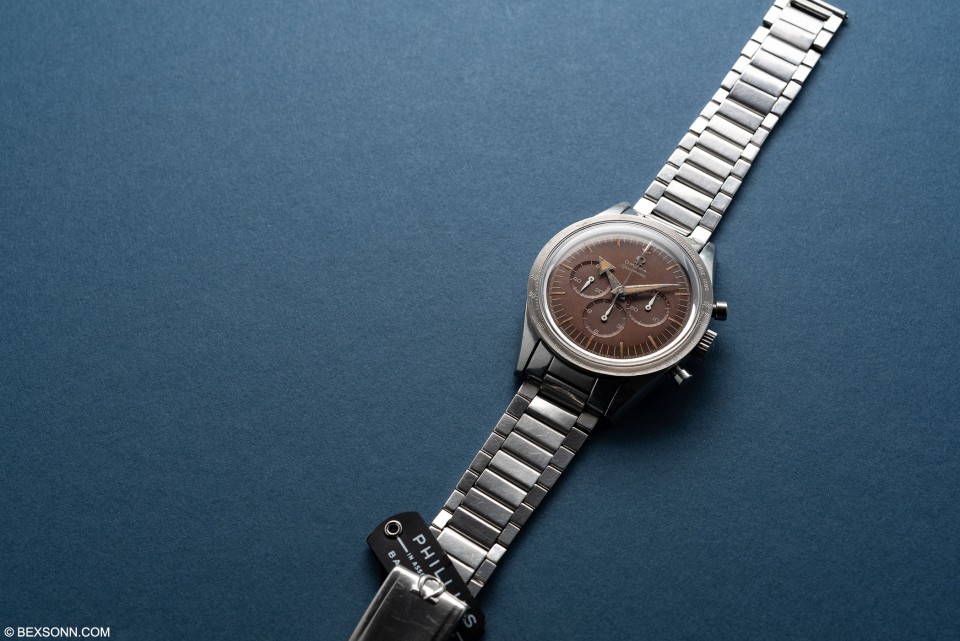 There were two CK2915 Speedmasters in this Phillips Geneva Watch Auction Eight sale and Lot 111 was the very first iteration; a -1. This example featured a very sought-after patinated dial. The dial of this -1 from 1958 has turned from the deep matte black to a light milk chocolate-brown, otherwise known as “Tropical”. Records confirm this watch was originally delivered to Singapore, which is perhaps were it picked up its tropical nature. It also included all typical traits which confirm it was very early example but was this reflected in its realised price of CHF200,000? We shall get to that. 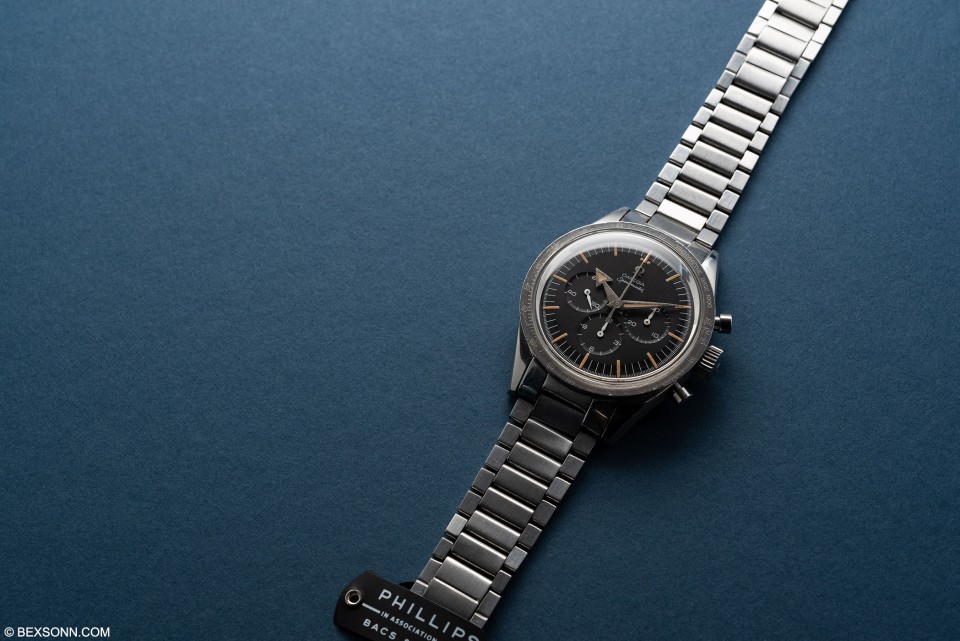 The second of the two CK2915 Speedmasters from this auction was Lot 114: a -2, while perhaps not as important as the -1, was from a personal point-of-view my favourite of the two. As mentioned, certain watches look better with tropical dials and some don’t and for me the CK2915 Speedmaster is one of them that doesn’t work with an overly patinated dial. This -2 from 1959, had been preserved in brilliant condition, featuring a perfect matte black dial and lume that has patinated to a lovely warm cream hue. Furthermore, it came accompanied by its original box and guarantee booklet, which made it an attractive lot for someone looking for an early Speedmaster. It would appear I wasn’t the only person who thought so, as it outperformed the -1 above, selling for a realised price of CHF225,000.

Once again Phillips in association with Bacs & Russo have done well, in fact to the total sum of 21,359,750 Swiss Francs. However, there were quite a handful of lots that were passed but no one is perfect, including Phillips. That said, there were a few lots that perhaps underperformed but there were a good few that surpassed expectations – such as the surprising bidding, over 1941 Audemars Piguet chronograph ref. 10198/1533, which sold for 3x its higher estimate (CHF384,500). Also not forgetting the prototype Omega Alaska Project ref. 145.014 ST, which sold for nearly 4x its higher estimate of CHF60,000 (sold for CHF193,750). That said, there was the perhaps underwhelming results for both early reference CK2915 Speedmasters, with the -1 perhaps more surprising of the two – could this have been down to the tropical nature of the dial? However, it was still a world record for a -2 at auction but there was a feeling it could’ve sold for much more.

Nonetheless, I think this auction was evidence, yet again, that the vintage watch market is not only alive and thriving, but certain brands seem to be faring better at auctions than others i.e. Rolex, Patek & Omega (depending on quality). You also have the more niche brands such as Longines, Universal Geneve, Eberhard & Breitling who are still quite strong and even these need to be the best of the best to see a decent result. However, as I’ve mentioned in the past, one must remember that these new prices achieved cannot be used as a realistic benchmark but more as an indicator of where the market is headed.