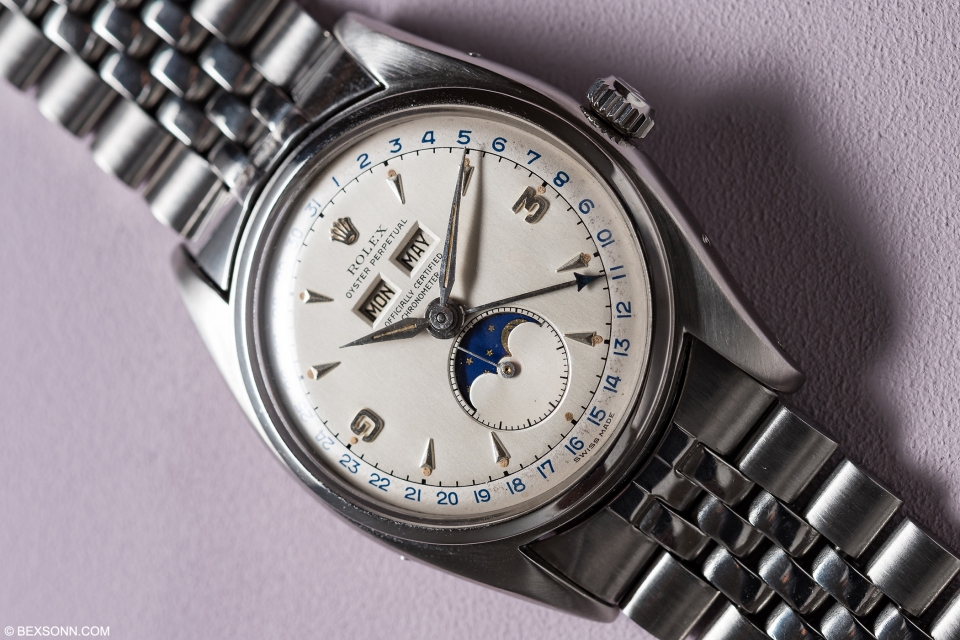 Now that the dust has kind of settled after the Phillips Geneva Watch Auction: Five, in typical fashion, we decided to share our thoughts on how the lots we highlighted performed. By now we are all familiar with records being set and surpassed every time we attend any of Phillips watch auctions, of course this weekend was no different. While there were a few minor changes, such as the tent being move from one side of La Reserve to the other, all-in-all the stage had been set. It was a full room indeed and without doubt, everyone was anticipating the sale a certain “Bao Dai” – though we had our eyes on another 6062 in the auction. Ordinarily, whatever the outcome of that lot was, there were lots that would see some fierce battling done in the room, on the phones and online. 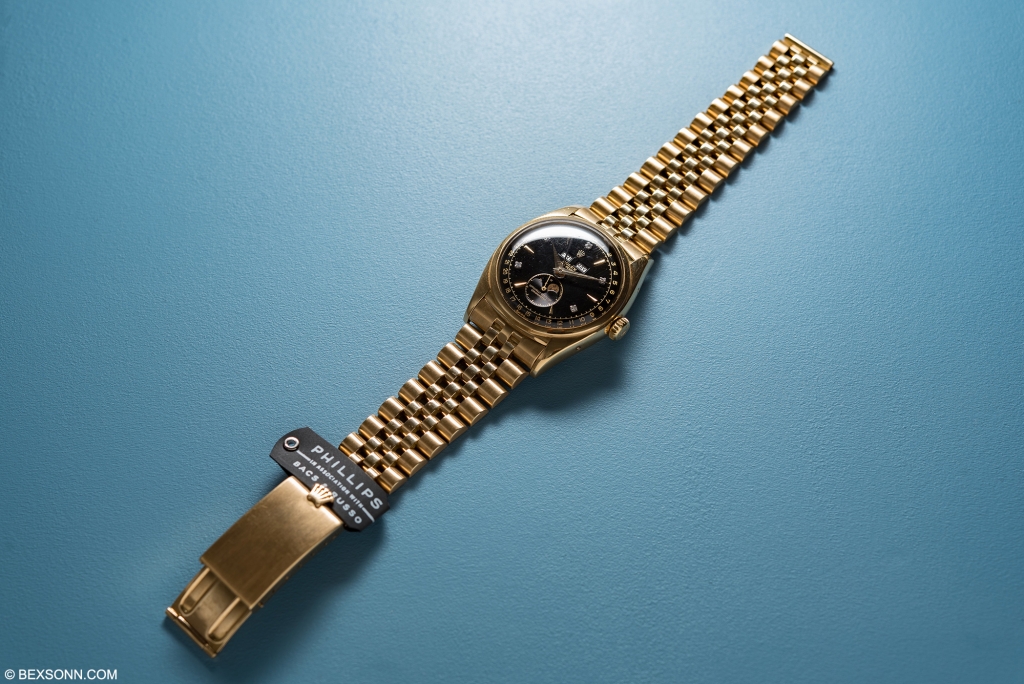 Great expectation was placed on the shoulders of the Bao Dai Rolex 6062, it was of course going to shatter its previous record set back in 2002 but the question on everyone’s mind was, “will it become the most expensive Rolex ever sold at auction?” Nicknamed ‘Bao Dai’ after its original owner – the last emperor of Vietnam – this 6062 is unique. 6062s are rare as Rolex didn’t make many watches with moon phases, but this example is one of only three that features a black glossy gilt dial and diamond indices. That said, of the three in existence this is the only one to feature diamonds at 2, 4, 8, 10 and 12. How did it fair? After a bit of a slow start, things quickly picked up and as is the case with most extremely rare pieces like this, the bidding war came down to just two people but when Aurel finally brought down his gavel, a new world record for the most expensive Rolex ever sold at auction was realised – dwarfing the previous record, achieving 5,066,000 Swiss francs (after fees). 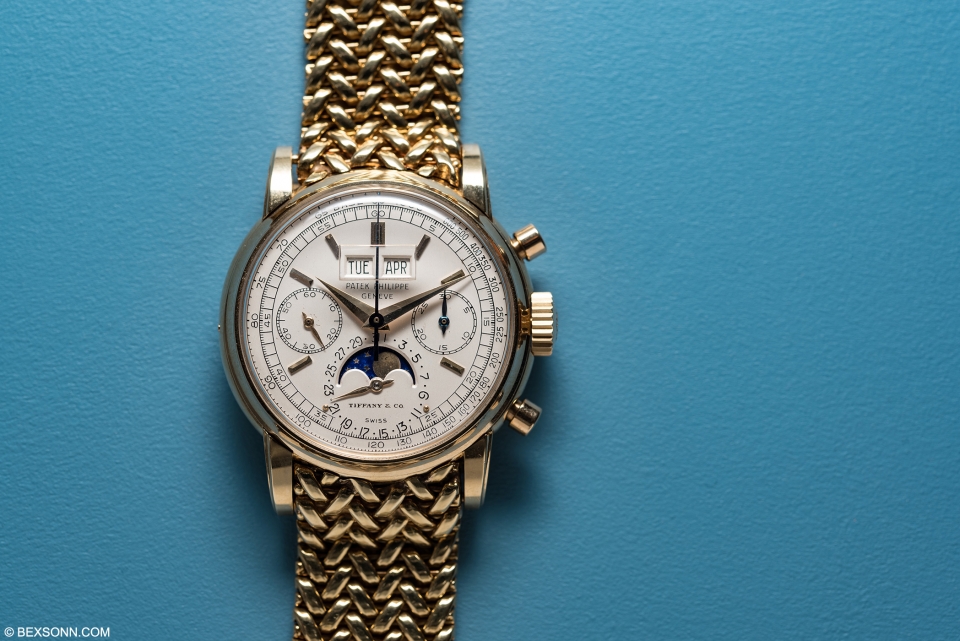 Another lot pick of ours was this Patek Philippe perpetual calendar chronograph retailed by Tiffany & Co ref. 2499. This is only one of two second series 2499’s that bears the New York retailer’s stamp. The unique nature of the dial, with the Tiffany & Co. signature different in style and the use of batons, as opposed to Arabic numerals (which the other known example has) – made this example perhaps more desirable and the price realised when the hammer fell on this piece echoed these unique details. The price achieved (1,570,000 including fees) made this the most expensive second series yellow gold 2499 to ever sell at auction. 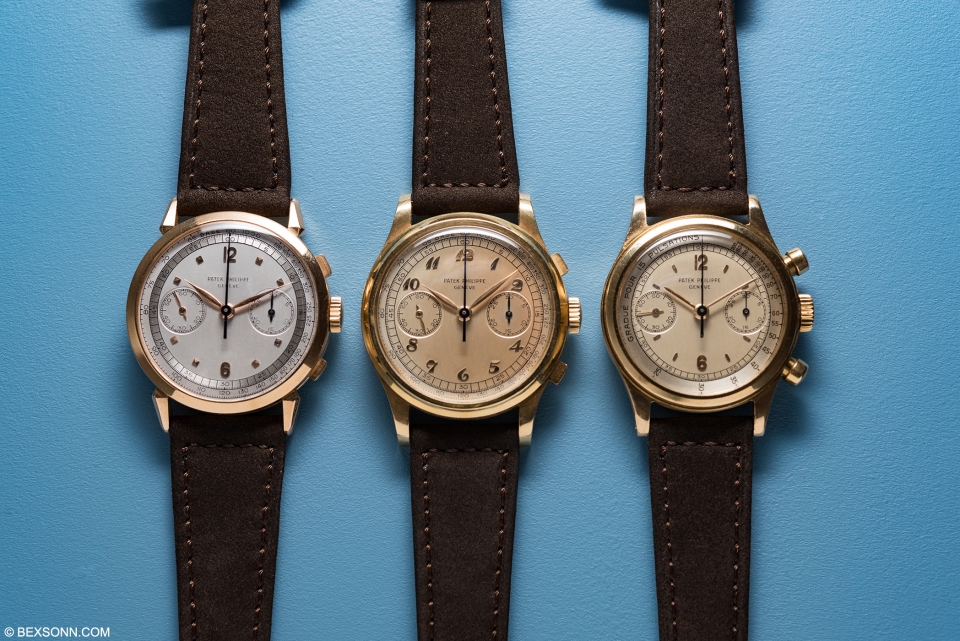 There were also three special Patek chronographs we chose to highlight too. All three examples were very different but all three Patek Philippe chronographs were made within a 4-year period and all using the same Cal. 13-130. One of favourites was the second series “Tasti Tonde” ref. 1463 made in 1953, which featured a beautiful two-tone pulsation scale dial, housed in a 35mm Borgel yellow-gold case – how did it fair? Not too shabby (at 250,000 Swiss francs) but one would’ve hoped it would’ve done better. Perhaps our equally tied second favourite of the three examples was the large, in comparison to the 1463, ref 530 with Breguet numerals. Again, another unique piece, as this is the only known yellow-gold ref. 530 to feature Breguet numerals but would these details make all the difference when it went under the hammer? Of course, and when the gavel came down it sold for a very solid 790,00 Swiss francs (including fees). Of the three this lot probably both pleased and disappointed many. Why? These spiders lug ref. 1579 in pink-gold are a hard find and require some patience when trying to acquire one, not to mention the fact it was retailed by S&L (Serpico Y Laino), and its excellent condition. Where it disappointed was on the night, hammering for just 200,000 Swiss francs including fees. 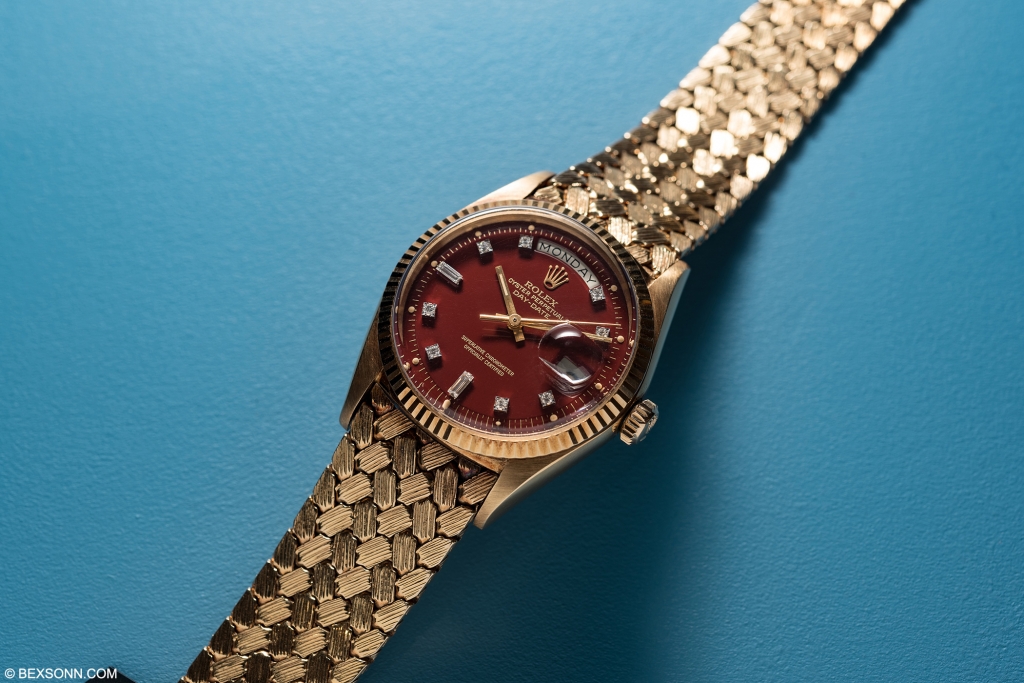 An additional lot selection of ours was this Rolex Stella Dial Day-Date that had been nicknamed “Pepita Burgundy”. This “Stella” dial DD featured no ordinary “Stella” dial. Instead of gold baton markers, this rich Burgundy “Stella” dial Day-Date sported diamonds, with baguettes placed at 6 and 9. With a dial in excellent overall condition, displaying nice fat creamy lume, which was still intact. And to top it all off, it was paired on  a rather elaborate, yet fetching overlapping textured link bracelet, how did it perform? Well, it hammered just above its highest estimate at 46,250 Swiss francs (including fees). 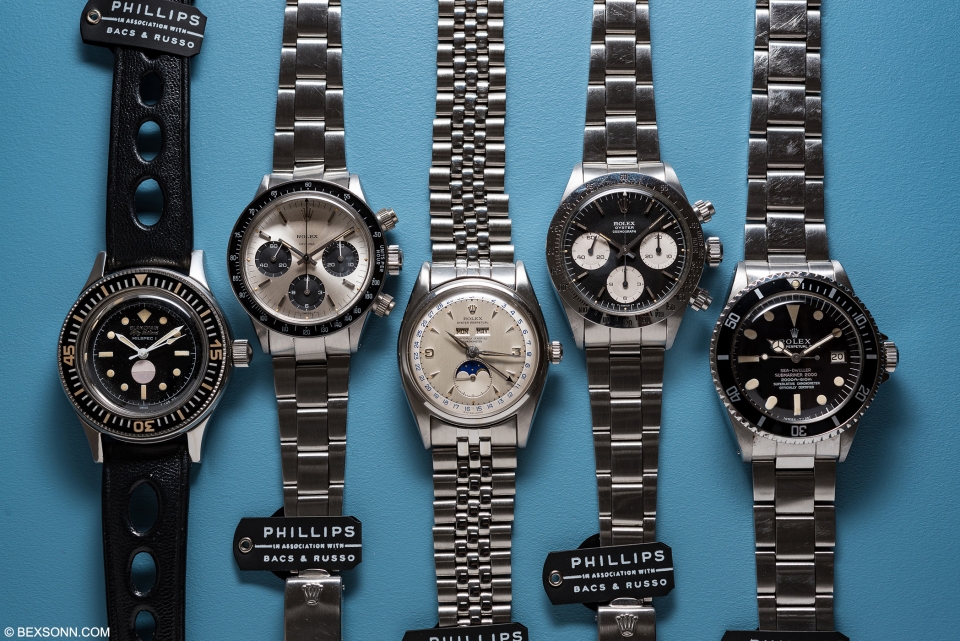 Then there were our top five lots, how did these fair – it was a mixed bag to be honest. The highly desired MILSPEC I with a humidity indicator at 6 o’clock, which despite some military specifications, was actually a civilian model as denoted by its two-body part case, bi-directional bezel and the luminous diamond hour marker at 12 o’clock – performed well hammering at 40,000 Swiss francs all in. But how did the rare Rolex “Solo Daytona” 6240 do? The 6240 is largely known by scholars as a transitional Daytona that was eventually succeeded by the 6263 and 6265, however, this example featured a rare variant of dial but whether this was an altered version of the “Solo Rolex” was the big question of course but that said, it did feature a couple of sought-after traits. Such as, period correct MK0 push-pieces, with notable traces of the brass beneath starting to show and retained its original twin-lock 700 series winding crown but would this be enough to create a frenzy when it went under the hammer? Unfortunately, not, as when the gavel finally came down – it sold for CHF 100,000 (fees included). 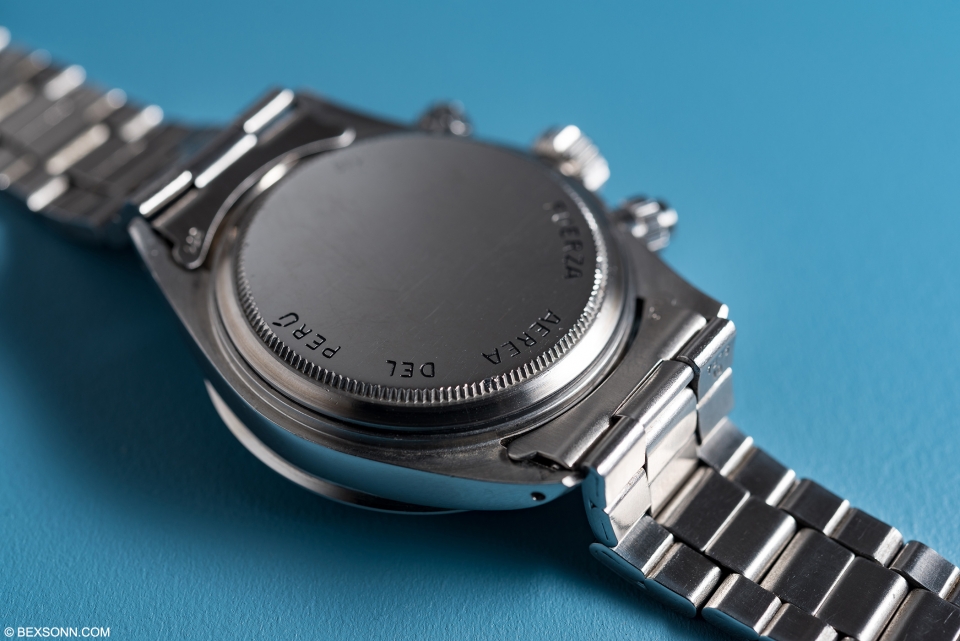 There was another rare Daytona in the mix too; the rare 6265 FAP (FUERZA AÉREA DEL PERÚ). FAP watches are known by scholars as one of the rarest series of watches produced by Rolex. It is estimated that around 700 Rolex watches were supplied to the Peruvian Air Force. A few of these watches were Cosmographs, with the military designation engraved on the case back. Adding to its rarity this 6265 was only further enhanced by the fact it came from the original owner but just how did these details impact its hammer price? It performed rather well, especially when you consider the only difference between this and a civilian variant is the engraved case back, selling for CHF 93,750 fees included. 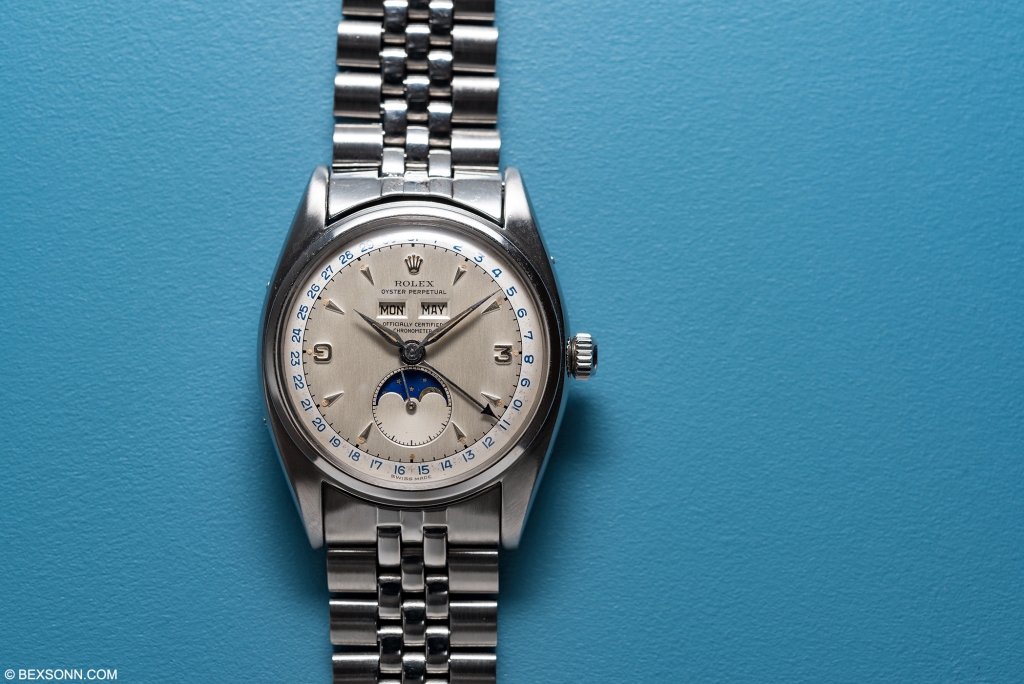 Then there was the case of a certain Rolex 6062 I personally couldn’t wait to see go under the hammer. The rather elusive stainless steel 6062. This 6062 featured Arabic numerals at 3 and 9 o’clock, with arrow-head markers throughout atop of a lacquered silver dial, with a grained outer ring – lending a subtle two-tone effect. The blue hue print of the outer date ring, displayed the preservation of this remarkable example and of course its correctness with open 6s and 9s. And if this wasn’t enough the condition of the case was also well-preserved, when considering its utilitarian case metal. So just how did this truly remarkable example of a steel 6062 perform? Admittedly, bidding was rather quick to begin with and it quickly approached the 1m mark, then things started to slow down a little but just before the gavel was set to go down, it was greeted with great applause as a sign of recognition of the imminent realised price of CHF 1,930,000 (fees included). 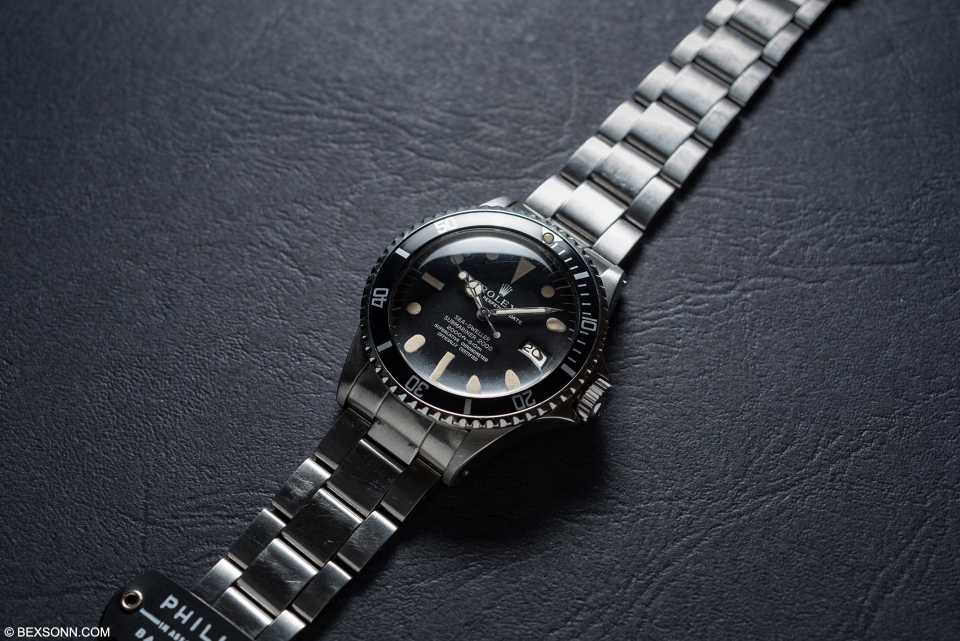 Then there’s this interesting Rolex 1665 Patent Pending DRSD, which by know you should know are particularly rare. However, this example had some serious provenance. It comes with, original, detailed documentation that the watch was loaned in 1971, by a Rolex AD, to an employee of the Divcon-Oceaneering AG. Who at the time was asked by Rolex to conduct some tests and provide some feedback, as well as images, regarding the watch and its performance at sea. After doing so, the watch was gifted to the diver – which is also documented. With an estimate of 100 – 200K Swiss francs, just how did this historically important Rolex Sea-Dweller do? All things considered, not too bad, with a realised hammer price – including fees – of 175,000 Swiss francs. 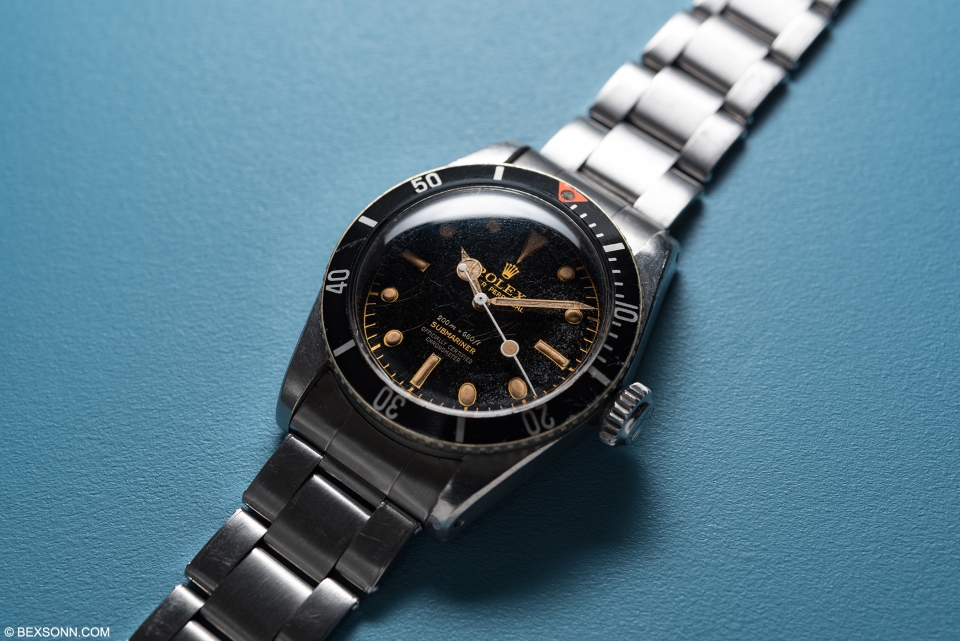 Last of all, this Rolex Submariner ref. 6538 “Big Crown” we highlighted, which wasn’t just any old “Big Crown” – no. It was a 4-liner that came as a full set and when we said full, we meant it. Accompanied with its box and certificate, you also get the original hang tag, Rolex anchor, sales tag and wallet. Furthermore, this Sub was still attached to its original bracelet, a very rare ‘big logo’ bracelet, stamped ’59’. It’s bezel and case were in great condition as well, with the bevels still fully intact and thick. That said, it failed to meet its lower estimate of 200,000 CHF, therefore remaining unsold. Perhaps last year’s record sale was an exception or maybe just what a difference a tropical dial makes?

Once again Phillips in association with Bacs & Russo have done well, in fact to the total sum of some 32.6m Swiss Francs – surpassing their previous auction by just over 5 million. However, there were a handful of lots that were passed and a few that were withdrawn. That said, there were quite a few lots that perhaps underperformed but there were a good few that surpassed expectations – such as the heated bidding war, by two well-known dealers, over “The Legend” yellow-gold Rolex Paul Newman Daytona, which is now the most expensive Daytona ever sold at a public auction, hammering at 3.7M Swiss Francs (fees included). This lot was perhaps the biggest shock over the entire weekend. I did manage to visit some of the other auctions held over the past weekend and there were a couple of shockers there too but none on this scale. Not only did it render some speechless but also left a few scratching their heads.

Nonetheless, I think this auction was evidence, yet again, that the vintage watch market is not only alive and thriving but some buyers are now being priced out – turning to alternative timepieces more within their price range, which are admittedly also doing well. I also think this auction and perhaps all other auctions over the weekend displayed something else too; not only is Rolex king but Patek Philippe were not as commanding this weekend as they had been previously, with only one example in the Phillips auction really outshining any of the high-profile Rolex examples – maybe this was just a blip? That said, one must remember that these new prices achieved cannot be used as a realistic benchmark but more as an indicator of where the market is headed.