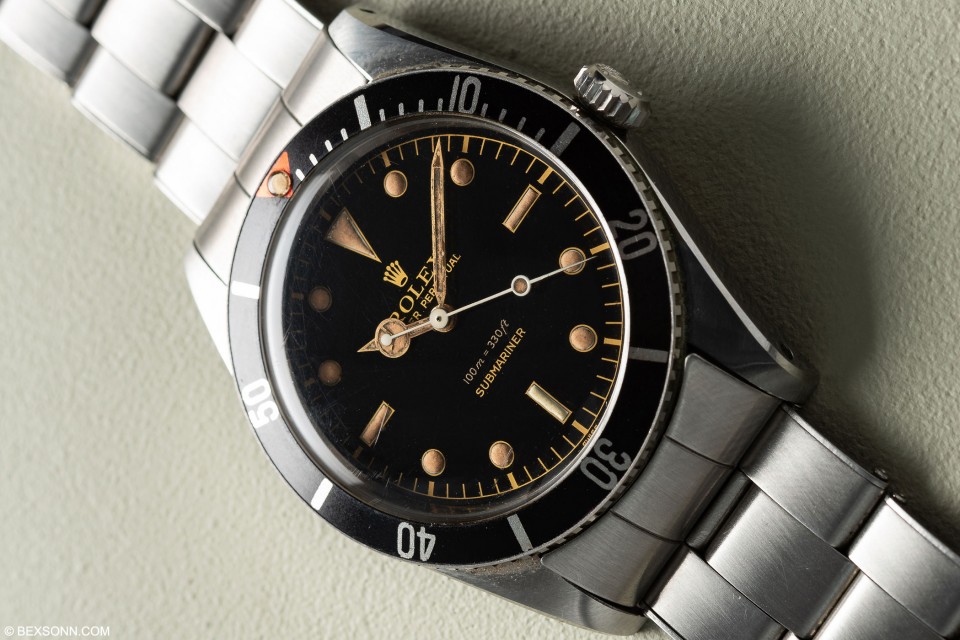 Sunday’s session two concluded Phillips Geneva Watch Auction: NINE and in typical fashion, we thought it would be only right to see how the lots we highlighted performed on the big stage (rostrum). It’s not uncommon to expect big results from Phillips and of course this weekend was no exception. There was a nice buzz about this auction and of course everyone was curious how well a certain George Daniel’s pocket watch would perform on the evening – though we had our eyes on few other, under the radar, lots. Ordinarily, whatever the outcome of that lot was, there were lots that would see some fierce battling done in the room, on the phones and online.

Lot 49 was an early Daytona that was perhaps to the layperson just another Daytona but on closer inspection you’d have notice this Daytona featured what is known as a “Telephone” dial. In addition to the standard steel baton hour markers and “Big Red” Daytona font, it also features Arabic numerals printed on to the dial. While this is a rather rare trait, perhaps never seen before, it is believed to have been added after purchase – at a later date – to increase its legibility at the request of the original owner. We found this to be rather intriguing and quite frankly a quirky but sane request. It would appear we weren’t alone in our thoughts as it sold for CHF 86,250.

6234s have seen somewhat more interest over the past few years and while black dial examples are probably more sought after, you can’t dismiss their white dial counterparts. Lot 57 (circa 1959) featured a white dial, which exhibited nice warm patina, a vibrant blue telemeter scale and blue chronograph central seconds and register hands. While these aren’t particularly rare, our main reason for highlighting this piece was its condition (something you’ll hear me mention quite a bit in this post). Perhaps the most important thing to consider when collecting anything, is condition and this 6234 was immaculate. The stainless-steel case not only appeared but also felt well-preserved, retaining its sharp edges and surfaces – hence its realised price of CHF 85,000. Not too shabby…

Any Rolex triple calendar is considered special and the reference 8171 is no different. Known as the ‘Padellone’, which translates to large frying pan by Italian collectors because it apparently resembles a large frying pan. The Padellone is widely considered by vintage collectors as one of the holy grails of Rolex collecting and in general one of the most sought-after pieces ever. Rolex were not known for their more complicated pieces such as this, so these days there is somewhat of a premium placed on them. This example was cased in yellow-gold, perhaps not the rarest metal of choice but its immaculate dial, coupled with it superbly well-preserved and super sharp case, added another element of distinction. This Rolex 8171 ‘Padellone’ sold for a realised price just shy of 1 million Swiss francs at CHF 980,000.

There were two Datejust lots that we/I simply adored, and it would appear we were not alone. As you’ll have heard me mention, the Datejust is a watch Rolex have been producing for many, many years before any other serially produced timepiece from their range and it was a game changer. The first example we coveted was lot 69 that featured a co-signed dial that displays the text “Joyeira Riveria” above the OCC designation. This 1953 Datejust was retailed by the Joyeria Riviera, the jeweller based in based in Havana, Cuba, since 1943 and the famous jeweller has had the privilege of stamping their name on various other vintage Rolex watches. But more importantly how much was paid for the privilege of these rare details? 46,250 Swiss francs.

The other Datejust, that I’d say was arguably my favourite lot of the GWA9 auction, was lot 72 which was the same but different. This 1954 Rolex Datejust featured the nonchalantly cool reeded bezel and “Ovettone” case. Moreover, the case of this reference 6305 was in 18-carat solid pink-gold. Perhaps the standout feature was its flawless black lacquer dial, which featured three lines of text; “Chronometer Officially Certified “at 6 o’clock. This configuration was extremely rare as most dials display “Officially Certified Chronometer” in two lines, just like lot 69. However, unlike lot 69, it sold for more than 3 times its higher estimate at 150,000 Swiss francs.

The other holy grail Rolex watches that featured a triple calendar and moonphase in this auction was lot 71: the reference 6062. Whereas the Ref. 8171 came in a huge 38mm snap back case, the ref. 6062 came in a more traditional 36mm case with a screw down case, hence the term ‘Oyster’ on the dial. While Rolex were no strangers to variation, the dial of the 6062 provided the perfect platform for this and as such this example featured stars on the dial in lieu of traditional hour markers. Rolex barely did this and only put it on some of their most exclusive models, including this example. Like the 8171, this particular variant of 6062 also received a nickname: ‘Stelline’ translating to starlet. However, unlike the 8171 it perhaps didn’t perform as well, selling for a realised price of CHF 548,000.

Lot 84 was another one of our highlighted lots and while it at first may have looked like just another Calatrava, it was in fact a minute repeating Patek made in platinum. As mentioned in our original article, these are not your run-of-the-mill timepieces; not only do they have to be requested but there is also certain list of criteria that must be met beforehand. This reference 5078 came housed in a 38mm platinum case and it is certainly one of the most understated minute repeaters that Patek makes. It featured cathedral gongs, endowing a much richer and louder sound than a traditional minute repeater and was topped off with a gorgeous white enamel dial. While it never underperformed, it didn’t really overperform either, with a realised price of 262,500 Swiss francs, saving its new owner the hassle of meeting the strict criteria required.

Lot 92 was a rather important Jaeger-LeCoultre. Released in 1959 and historically important for the brand, the Deep Sea Alarm was a divers watch that featured an alarm, allowing the wristwatch to remind divers to return up for air. Only produced for a short period of time, it is estimated that only 1,061 examples were ever made. This example came with its original presentation box, which is a nice touch but the real characteristics that made this watch standout was its patinated dial. The minute track had turned to a nice tropical tone, with lume that had also patinated. That said, it perhaps didn’t perform as well as expected considering lot 92 consisted of two watches (realised price of CHF 56,250).

This early Vacheron Constantin chronograph ref. 4072 was destined to sell but the question would be for how much? I still believe Vacheron’s are undervalued and while this particular example collected an okay-ish sum, there is part of me that believes it should have done better when considering exactly what we are looking at here. The most interesting fact about the ref. 4072 is that it was mostly cased in yellow gold, though some also came in pink-gold, stainless steel, or steel and gold combinations. It is known that very few were cased in pink-gold. While the dial wasn’t perfect, its overall condition is no less that what we would’ve expected from a timepiece over 60 years of age. It still sold for 27,500 Swiss francs – which isn’t earth shattering but still respectable.

Another historically important and early 20th century timepiece was lot 166: a Patek Philippe ref. 11 Curvex, which just so happened to turn 100 years old this year. Made in 1919, this ref. 11 was an extremely important piece, as it was a very early example of a wristwatch made and sold in a time where pocket watches were still the accepted method of keeping a timepiece. The large rectangular case is characteristically from the era with beautiful enamelled graduating Breguet numerals and blued cathedral hands. While it perhaps wasn’t a lot that drew too much attention, it would appear that its importance didn’t go unnoticed; selling for CHF 45,000.

Last but by no means least of our highlights is the rather humble but extremely well-preserved 5508 Submariner. This early Submariner reference 5508 was, for want of a better term, absolutely mint! This lot was not only the last Submariner to carry a 100m depth rating but also the last reference to have no crown guards too. As mentioned at the time, this 5508 looked as though it had lived a rather sheltered life and had probably never even come into contact with sea-water and perhaps even worn less than occasionally. Everything about this 5508 was in pristine condition; from case, to bezel, to bracelet and furthermore, it came directly from the family of the original owner. How did all of this influence its bidders? Handsomely. It smashed its highest estimate of CHF 160,000 and sold for a realised sum of 500,000 Swiss francs.

By now it perhaps sounds like a cliché but once again Phillips in association with Bacs & Russo have performed well at their Geneva Watch Auction: NINE, with a realised total sum of 25,800,625 Swiss francs, with 99% of the lots sold. There were a handful (literally 4) of lots passed but no auction house is perfect, Phillips included. That said, there were a few lots that perhaps underperformed but there were a good few that surpassed expectations – such as the surprising bidding, over lot 72 that we highlighted: a humble 1954 “Ovettone” Rolex Datejust which literally sold for 3x its higher estimate. Also not forgetting the star of the auction, the George Daniels Grand Complication, which sold for a cool 2.4 million Swiss francs. Moreover, how about the lot 213 that we highlight: an immaculate Rolex Submariner reference 5508, which had a highest estimate of CHF 160,000 but went on to sell for 500,000 Swiss francs! While this is all well and good, let’s not forgot that a coveted early Speedmaster 2915-2 and Patek Philippe ref. 530 chronograph went unsold – as I said, nobody is perfect.

Nonetheless, I think this auction was evidence, yet again, that the vintage watch market is alive but there are signs of buyers being more cautious, with certain brands faring better at auctions than others i.e. Rolex, Patek (which both filled a large percentage of this auction) & Omega (depending on quality). You also have the more niche brands such as Longines, Universal Genève & Breitling who are still quite strong and even these need to be the best of the best to see a decent result. That said, this auction probably best demonstrated is the emergence of modern independent brands at auction, which all performed very well.

Perhaps the most important thing to take away from this auction is how crucial condition is to the overall value, which is something we’ve touched on before. Take for instance the 5508 Submariner which sold for CHF 500,000, which is more than what a 14-carat gold Paul Newman Daytona in decent condition sold for!? However, as I’ve mentioned in the past, one must remember that these prices achieved cannot be used as a realistic benchmark but more as an indicator of where the market is headed.