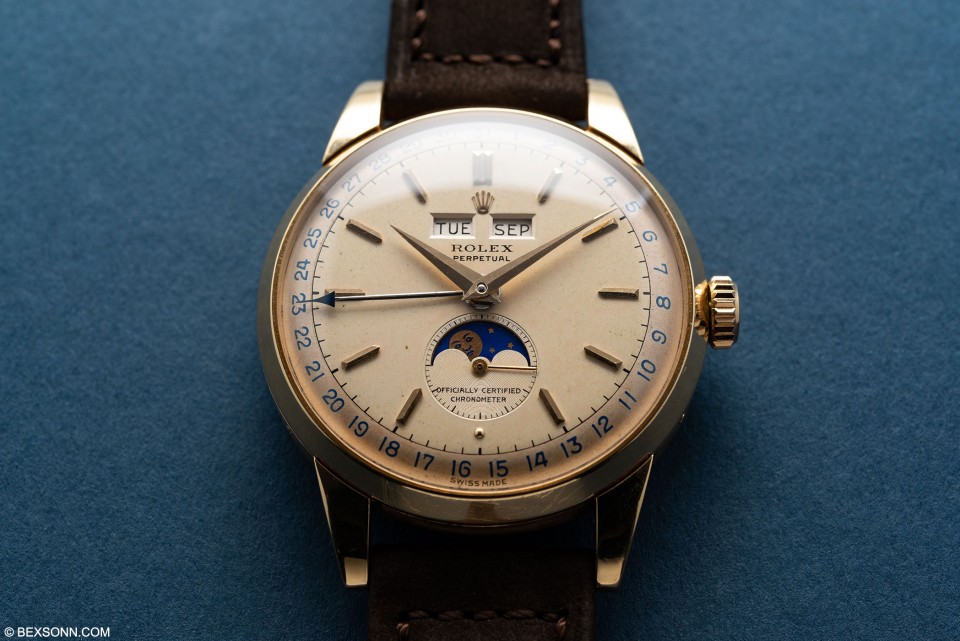 Watch auctions for 2018 are now coming to a close. We’ve seen some very interesting and much discussed results throughout the year, but the New York auctions bookended the year quite nicely. Over the past two weeks we posted highlights from both Phillips and Sotheby’s, whose auctions took place on the same day. Sean and I chose some lots to highlight from Phillips and Sotheby’s respectively but how would each piece perform under the hammer? Of course, Phillips have been in a rich vein of form over the past few years and Sotheby’s, now under the new leadership of Sam Hines, have already started to up the ante…

The Blancpain Fifty Fathoms, a watch born out of the product of passion by French military combat divers’ elite troops’ captain Robert Maloubier and Lieutenant Claude Rifau who were on a mission to source a wristwatch fit for their frogmen. The Blancpain Fifty Fathoms, as many of you may or may not know, is the original divers watch. Named the “Fifty Fathoms” after the British measurement of 50 fathoms, which was then considered the maximum depth a diver could make with the oxygen mixture used during those days. This example offered by Phillips, was a very early example and a very unusual and rare one. It featured a ‘Luxor’ minute hand, where the tip of the minute hand is separated from the rest and resembles the obelisks of the Luxor Temples in Egypt. As we know it’s all about the details when it comes to vintage watches and this one sold for $30,000.

Any Rolex triple calendar is considered special and the reference 8171 is no different. Known as the ‘Padellone’, which translates to large frying pan by Italian collectors because it apparently resembles a large frying pan. The Padellone is widely considered by vintage collectors as one of the holy grails of Rolex collecting and in general one of the most sought-after pieces ever. Rolex were not known for their more complicated pieces such as this, so these days there is somewhat of a premium placed on them. This example was cased in yellow-gold, perhaps not the rarest metal of choice but the champagne dial added another element of distinction, coupled with the super sharp case. This Rolex 8171 ‘Padellone’ sold for a realised price $350,000.

Ah, the Rolex Submariner 6538 ‘Big Crown’ – first launched in 1955, the Ref. 6538 was made in small quantities and was produced only for four years. It was early times for the Rolex Submariner, and it set the tone for what is undisputedly the most popular watch model today. Furthermore, the Ref. 6538 gets extra brownie points for being the watch of choice for Sean Connery when he was James Bond, featuring in Dr. No, Goldfinger and From Russia With Love. Called the ‘Big Crown’ because of its unusually large 8mm crown, the Ref. 6538 is instantly recognisable from its lack of crown guards. Moreover, this example featured what is known by collectors as a 4-liner dial (OCC – Officially Certified Chronometer) and more importantly, it was a full-set that was fresh to the market. But just how much impact did this make? It sold for a realised price $567,000 – not bad at all…

The Rolex GMT-Master is till this day, one of the staples in the Rolex line-up. These two-time zone watches, with rotatable bezel was created in conjunction with Pan American Airlines and made for pilots in the 1950’s as air travel became more popular. This particular example was a yellow-gold ref. 1675, though it bore more similarities to a 6542. It was a very rare transitional variant that sported a aluminium bezel but didn’t feature any crown guards. Furthermore, it featured gold leaf hands and appeared to be hardly worn. It came as a full set, with its box and guarantee, and was impressively preserved – something reflected in its realised price of $76,250.

Rolex Daytonas at auction have been performing extremely well over the past couple of years and we’ve pretty much seen it all. However, Phillips always seem to have a nugget up their sleeves. This example being offered by Phillips was rather special. The reference 6263 was introduced in 1969 and featured a new Oyster case with screw down pushers and later on a chronometer rating. That said, this lot was one of the rarest variants of the 6263 as it is a) in yellow-gold, where most were made in steel, and b) featured a dial that displays the chronometer rating beneath the Rolex Oyster text, which gives way to its nickname the ‘Oyster-Split’. It is the earliest known yellow gold 6263 with a chronometer rating printed on the dial and as a result, it is one of the most desirable – hence the realised price of $225,000.

There was another Blancpain Fifty Fathoms up for auction on the 5th December, this time over at Sotheby’s, however, this example was the highly desirable MILSPEC I variant with a humidity indicator at 6 o’clock. That said, despite some military specifications, this particular example was actually a civilian model as denoted by its two-body part case, bi-directional bezel and the luminous diamond hour marker at 12 o’clock but it still performed well, selling for a realised price of $30,000.

Lot 82 was another Rolex Daytona, however, unlike the example mentioned above this one wasn’t as rare. That said, what it lacked in rarity it made up for in provenance. When we reached out to Sotheby’s about the origins of this piece and its owner, the original owner replied gladly with the heart-warming story posted in the original highlights post. This particular example featured a rare silver sigma dial, which had aged beautifully, with the Greek sigma letters either side of “T SWISS T” – signifying the use of white gold hour markers and hands. It also came with its original Rolex guarantee certificate and had been nicely paired on an oyster bracelet but also came with a spare jubilee bracelet too but just how much of a difference did these details make? It had no drastic impact overall but it’s always nice to know the background story of any timepiece (price realised: $62,500)

There was another Submariner that we chose to highlight from the auctions last week but this one wasn’t perhaps as highly sought-after as the 6538 mentioned above. It was a lovely and honest reference 5512 that featured a chapter ring and a crazed plexi that added a lot of character. This Submariner 5512 also featured, what is known to collectors as, “Pointed Crown Guards” or “Cornino” – Italian for small horn. Moreover,  it was being offered at auction via the descendants of the original owner and sold for a realised price of $25,000.

Last but not least was a gorgeous Rolex ‘Jean-Claude Killy’ Dato-Compax reference 5036. We’ve gone into the details of how the Dato-Compax got its name so there’s no need to get into that but of all the JCK’s we’d had highlighted in the past, we had yet to feature a 5036. This 5036 appeared to be in outstanding condition. The case appeared to be crisp, with pronounced lugs and comes on a black leather strap. The dial had a warm creamy patina to it, though it did show signs of aging and oxidisation, but it was honest and added a lot of character to the watch. It is also known that the reference 5036 had quite a short production run of only 3-years, between 1948 and 1951, and it is estimated that only 50 examples of this reference were made in pink-gold. Though was this particular example too good to be true? It is entirely possible as it was pulled and we’ve contacted Sotheby’s to find out the reason why it was removed from the auction at the 11th hour, which they commented saying “We pulled lot 257 for further research. We hope to see it come back up to the block in 2019!” In all honesty, let’s hope we do.

On the whole, both auctions were rather successful for their very own reasons. Phillips STYLED. auction of pairing watches with a certain attire, in our opinion was a brilliant idea, however, I’m not quite sure if there was any added value? That said, there were a few lots that clearly stood out because of their overall realised price; such as the yellow-gold ‘Padellone’ and the 4-liner 6538. However, one lot in particular that stood out for us was an Omega Speedmaster 105.003 ‘Ed White’ – why? This is a watch that in today’s current market can be pickup for around $12 – $17K, depending on condition but this example sold for more than double that at $32,500. There were a few lots that sold for nearly double their highest estimate, but this lot seemed to standout much more than others.

Sotheby’s on the other hand had a few surprises but admittedly also had quite a few lots that under performed in our opinion. However, there was one lot that perhaps stood out for obvious reasons more than most: A Rolex Submariner 6536/1, which was up for auction at an estimated value of $20,000 – $35,000. It eventually sold for $225,000 all-in, more than 10x its lowest estimate. That said, it will be interesting to see if/when that pink-gold ‘Jean-Claude Killy’ Dato-Compax ref. 5036 shows up again and how it will perform.