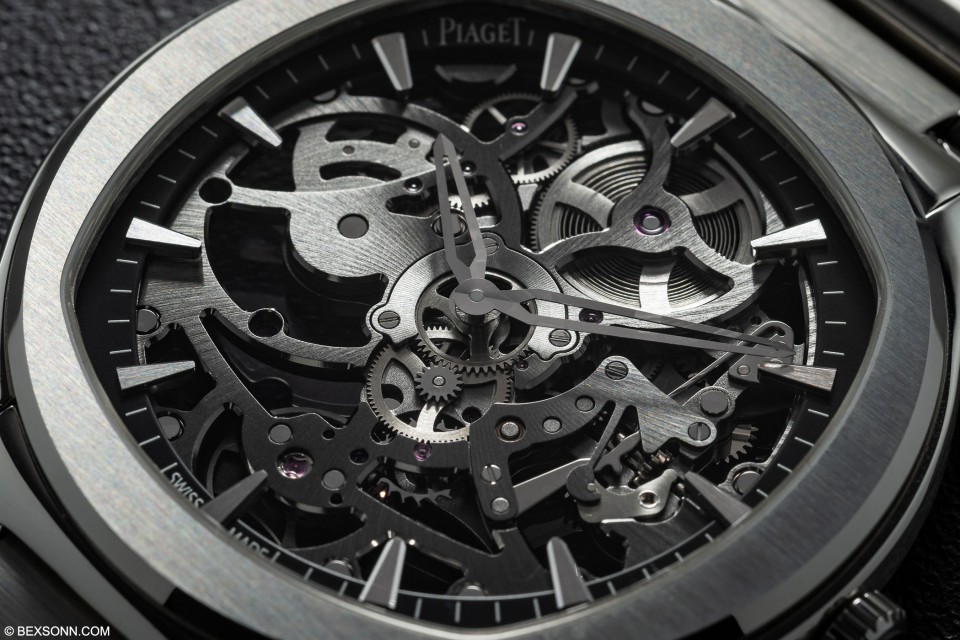 The last few of years have been rather intriguing for steel sports watches. Unless you’ve been living under a rock in some distant far away land, then you’ll know that even getting a hold of a Nautilus (now discontinued but watch this space) or Royal Oak Jumbo is nigh on impossible. Steel sports watches with integrated bracelets from pretty much any high-end watch brand is hot topic these days. Over the past few years, watch brands not ordinarily associated with said timepieces, have started to introduce their own interpretation of steel watches with integrated bracelets. I distinctly remember in 2016 when Piaget introduced a reinterpretation of their Polo sports watch, watch enthusiasts weren’t so quick to warmly welcome it back. It was met with snide remarks about how similar it looked to the aforementioned Nautilus. However, I think this latest release with a skeleton dial has completely transformed it.

Piaget are a true manufacture of watches, with plenty of notable achievements within the industry. Such as the famous ultra-thin 9P movement developed in 1957, to even most recent ultra-slim movements that have set watchmaking records along the way. Not to mention they were one of the first Swiss manufacturers to adopt the Beta-21 quartz movement. The Polo is nothing new to Piaget, though it’s original forebearer introduced in 1979 was something of a statement piece. Made entirely out of solid gold and housing the 7P quartz movement, the original Polo was quite sought-after. In fact, it sold so well it accounted for one third of Piaget’s watch sales – which highlights just how popular it was during the 1970s and 80s and not to mentioned it was frequently donned by Miles Davis. 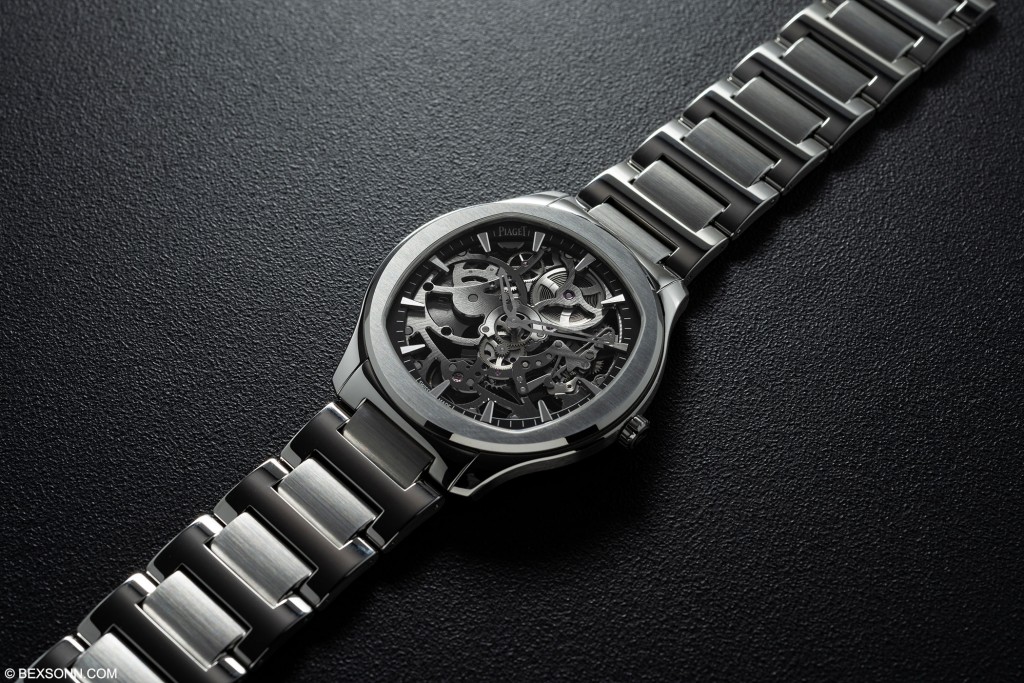 The case of this latest release somewhat differs from the original 70s piece, yet it still maintains a rather prominent design in stainless-steel. With a diameter of 42mm millimetres, which on paper sounds large, and a height of just 6.5 millimetres and also featuring an integrated stainless-steel bracelet, the Polo fully embraces the term “Jumbo”. To fully realise the potential of the Polo Skeleton, the designers at Piaget had to make sure the trademark aesthetics of the Polo case were kept intact, all the while making the new Polo Skeleton 30 percent thinner than the previous version. The satin brushed and polished textures of the bezel and the middle of the case, coupled with polished chamfers, give the Polo a distinctively sporty appearance and feel. 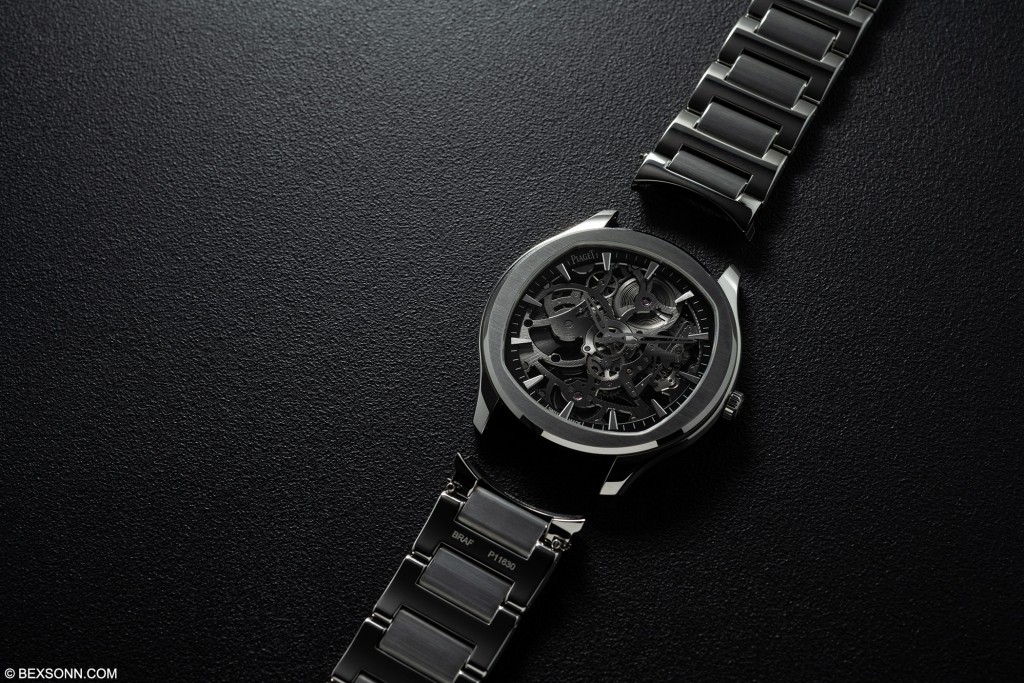 The combination of satin brushed surfaces and polished textures are also echoed on the lugs and furthermore carried over into the links of the stainless-steel bracelet. The bracelet for any luxury sports watch is quite important, as this element lends to the watches overall identity and in my humble opinion – Piaget have opted for a bracelet that feels familiar but yet still unique. The ‘H’ design integrated bracelet has also been revised in order to provide an interchangeable function, making it easy to switch the bracelet out for a leather strap – however, it would’ve been nice to see them incorporate an easy to adjust bracelet function. 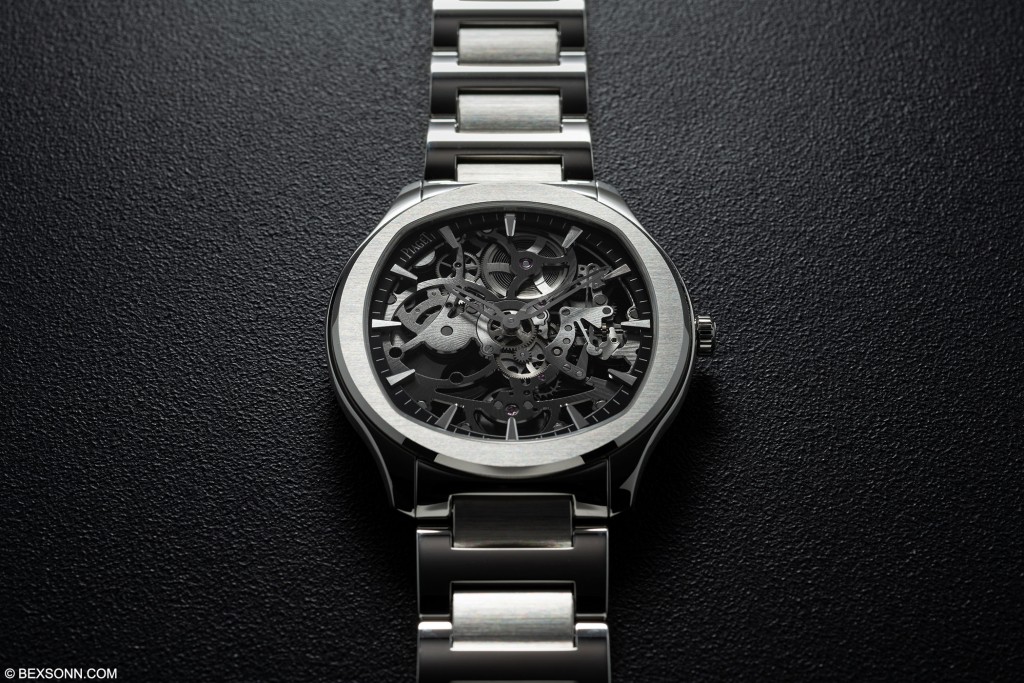 The dial, or perhaps lack thereof, is what lends to this new Polo Skeleton’s appeal. Piaget has long been renowned for creating mechanisms of exceptional slimness, it set-out to marry its two signature disciplines by developing calibres that were both exquisitely thin and meticulously skeletonised, setting multiple records along the way by unveiling the thinnest skeleton movements the world had ever seen, variously incorporating tourbillons, moon phase displays, exquisite enamelling, diamond settings and automatic winding. However, they’ve opted to keep this Polo simple yet effortlessly attractive. 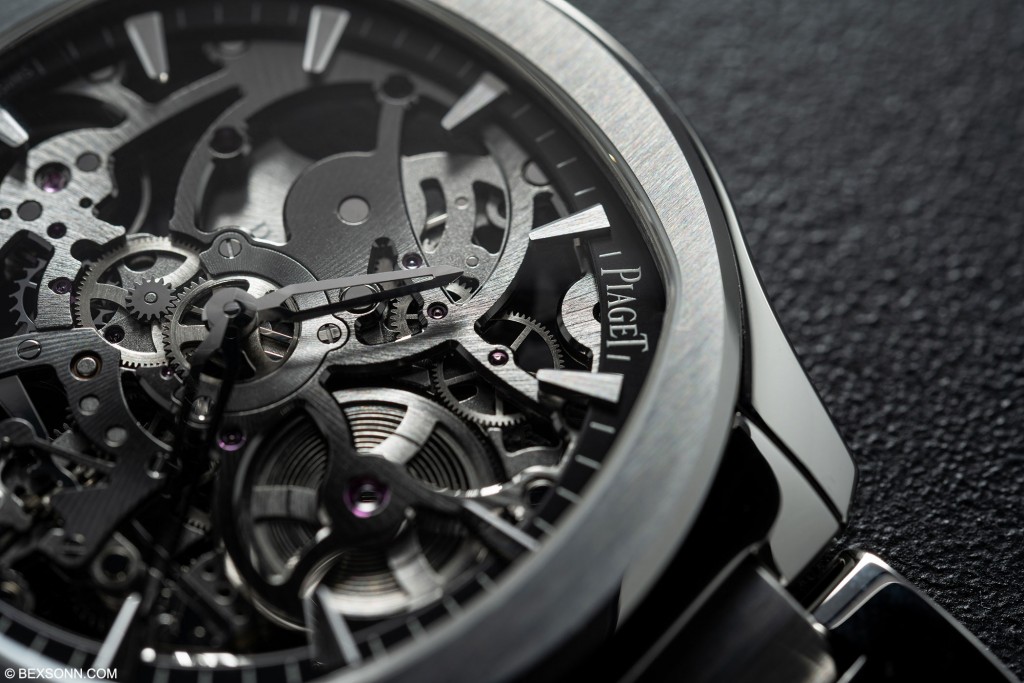 The dial is practically made from the skeletonised calibre 1200s1, with Piaget going a step further and even skeletonising the hour and minute hands – fully exposing the intricate nature of the skeletonised movement that has been PVD coated. Perhaps the only section of the dial which hasn’t been taken away is the dial flange which features the minute track and bears the Piaget logo between 10 and 11 o’clock. This flange also supports the hour markers, which cantilever over the skeletonised movement. 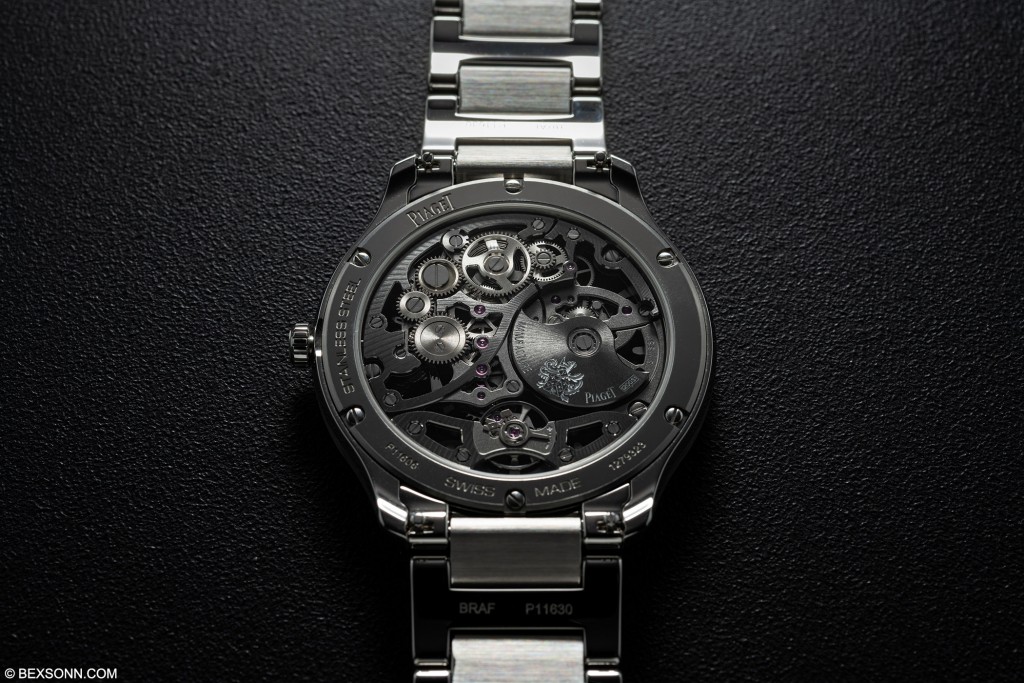 The ultra-thin automatic calibre 1200S1 of the Piaget Polo Skeleton, which measures just 2,4mm in thickness, can be admired from both sides through the sapphire crystal. The calibre 1200s1 is an updated version of the calibre 1200S that was previously used in the Polo S. The calibre 1200S1 is made up of no less than 189 components and incorporates an off-centre platinum micro-rotor, that has been engraved with Piaget coat of arms – which helps keep the profile of the movement low. Ticking over at 3 Hz, the calibre 1200S1 mainspring delivers 44-hours of power-reserve, something that can be observed uncoiling through the dial between 12 and 1 o’clock. 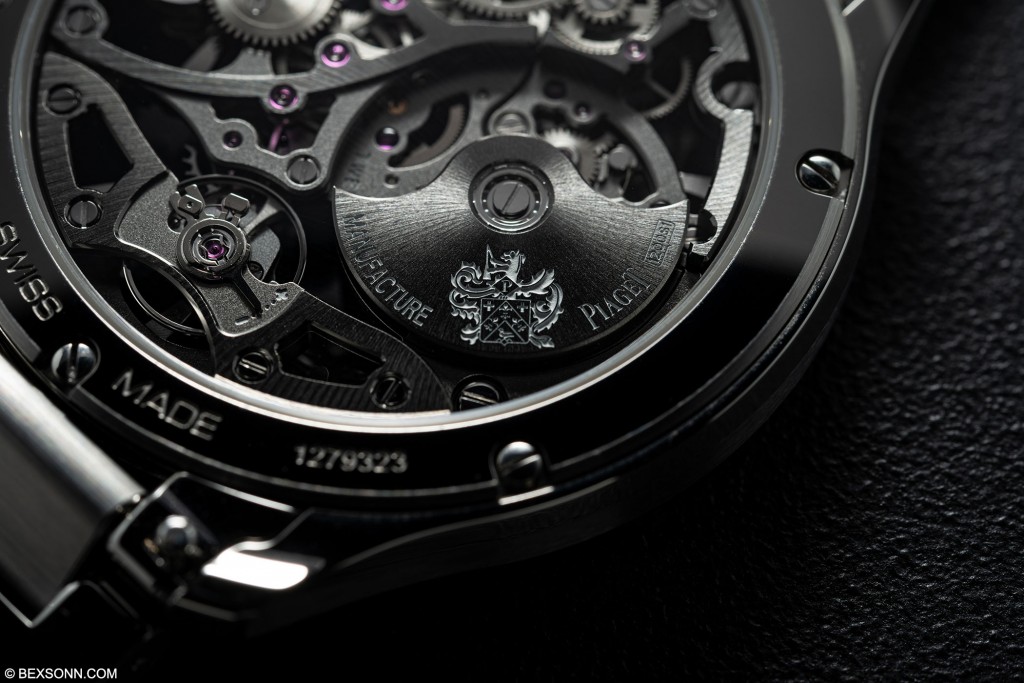 The movement appears multi-layered and complex but taking a closer look you’ll notice that the calibre 1200S1 is actually rather simple and minimalistic. What lends to its overall busy appearance is the way in which the bridges and baseplate has been expertly and intricately skeletonised, exposing the gears, the balance-wheel, the mainspring and micro-rotor that can be admired from the dial side. As mentioned, these exposed bridges have been coated in slate grey PVD but there’s also a version in blue, which further highlights the striking open-worked movement. 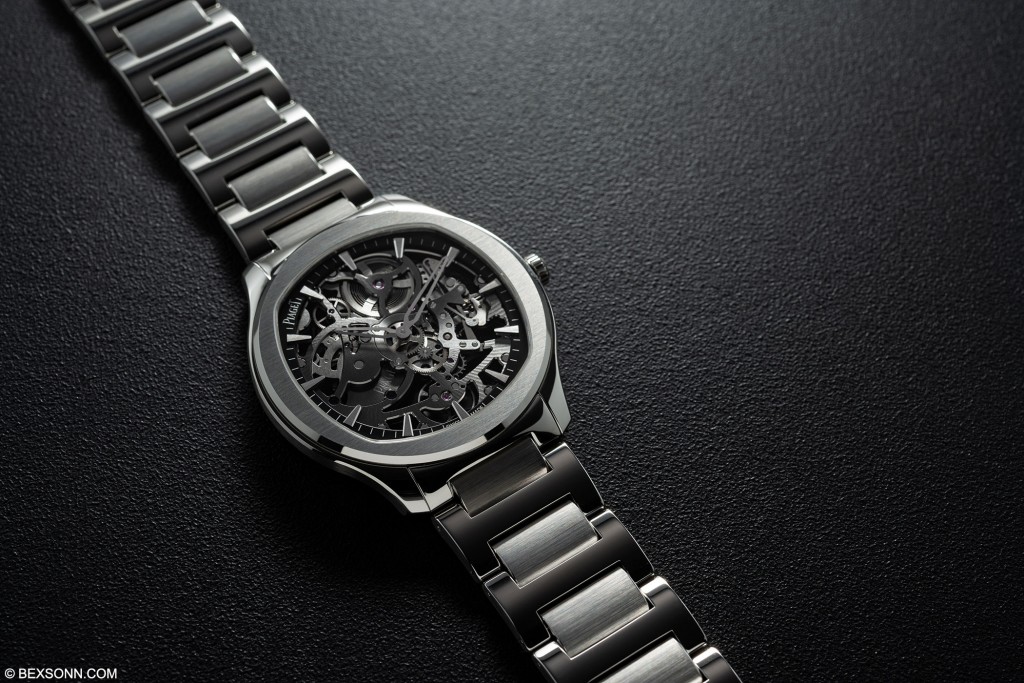 Admittedly when I first saw the Piaget Polo my initial thought was “yet another steel sports watch, with an integrated bracelet, from another watch brand”. But then I thought, wait a minute Piaget are well-known for their ultra-thin movements, so perhaps they might be going somewhere with this new take on their cult classic sports watch. The Polo S that was released back in 2016 got given the usual labels of a watch brand trying too hard to compete with the likes of the AP Royal Oak and Patek Philippe Nautilus and to be honest it’s not hard to see why.

The Polo S perhaps shared more similarities with Patek’s other sports watch that has grown even more in popularity: the Aquanaut. However, I think this new Polo Skeleton not only gives Piaget’s sports watch a fresh new look but, in my humble opinion, also gives it a unique appearance and takes it out of the shadow of countless other luxury steel sports watches. 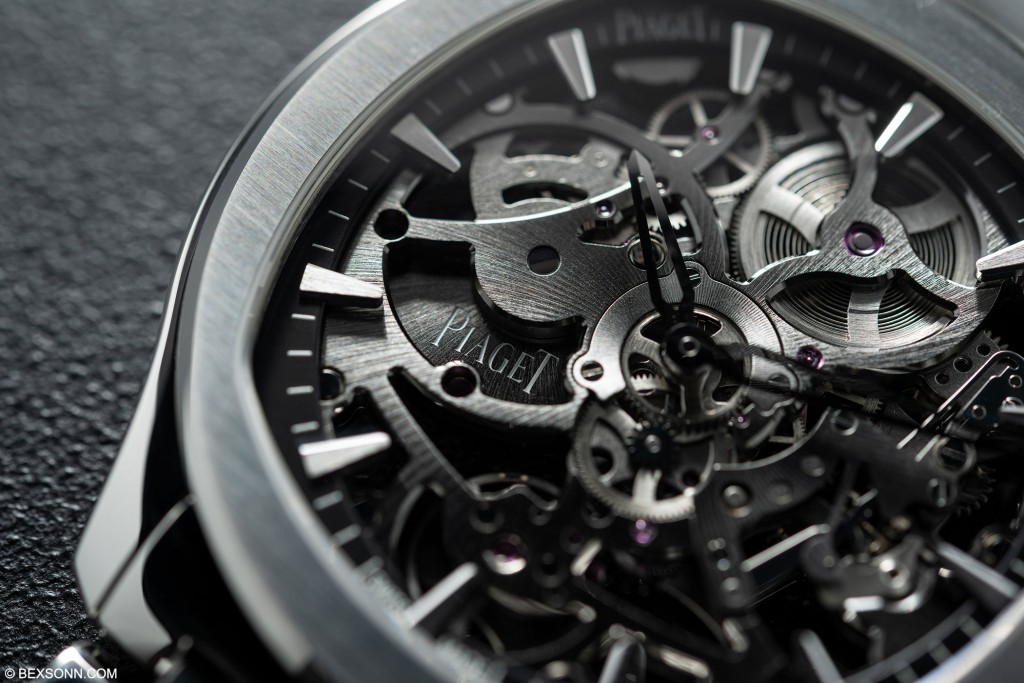 The skeletonised dial is a beautiful thing, and the omission of a date window is not only a smart move but makes sure the open-worked nature of the dial can be fully admired unimpeded. The more you look at the skeletonised dial the more you appreciate the attention to detail and little details, such as the Piaget logo placed on the underside of the micro-rotor so it can be seen through an open section of the dial. 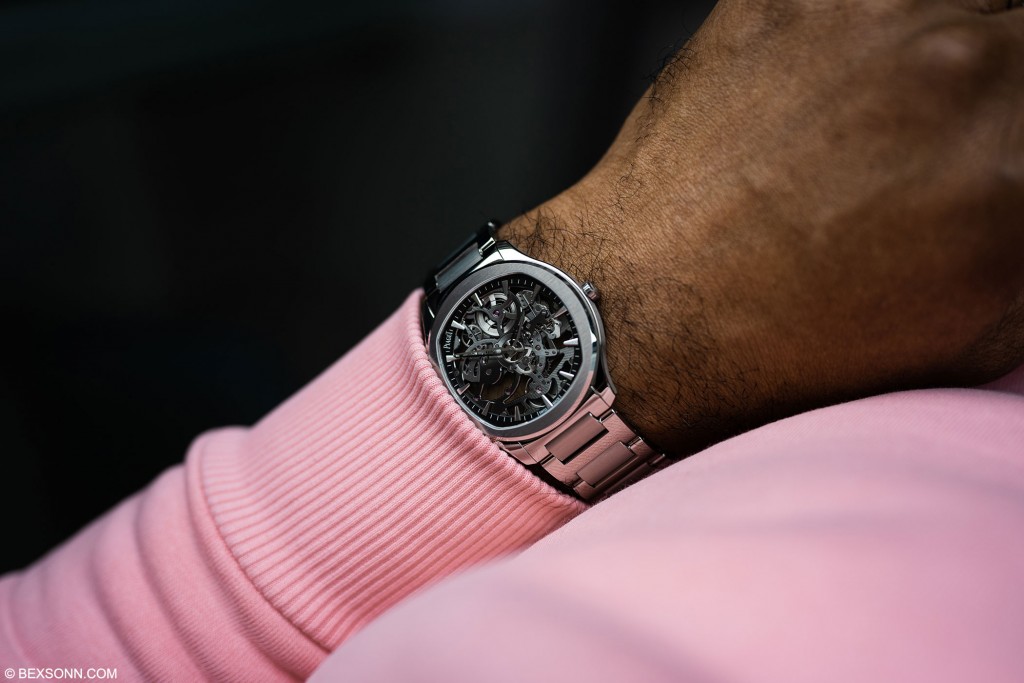 As already mentioned, the case measures 42mm in diameter but it honestly feels smaller than the numbers suggest, and this is likely down to the ultra-thin thickness of the Polo Skeleton. It perhaps goes without saying the Polo Skeleton feels great on the wrist and I’d opt for the bracelet over the leather strap every day of the week. However, it would’ve been nice to see Piaget refine the bracelet and add some sort of micro-adjuster, and also make it easier for links to be removed – something we’ve seen on other luxury sports watches. I might also add, it would be interesting to see the Polo Skeleton on a rubber strap in the future.

Overall, I like this new Polo Skeleton and what Piaget have managed to do with it this time round is more in-keeping with their identity. All the details you’d expect to see in any Piaget are present – not to mention the gorgeous open-worked movement. But what I think sticks out more than anything else is the fact that the Polo now has an original look.

The new Piaget Polo Skeleton is available in either Piaget Blue or Grey PVD movement and comes with an additional leather strap, priced at £26,500 For more details, visit the Piaget website.