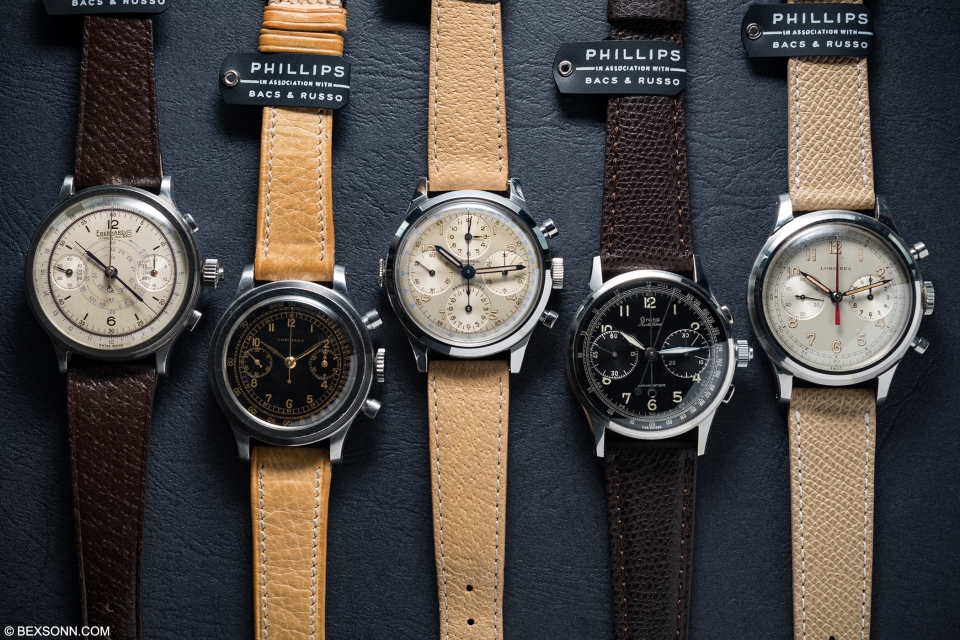 As May comes around, it is that time of the year again for watch auction season in Geneva. Once in autumn and once in spring, Phillips holds its auctions and since the beginning of last year, they have continually come up with headline grabbing sales, both due to the excellent marketing by Aurel Bacs and his team. Oh and of course, the downright awesome watches on offer. This will be their third auction since their association with Bacs and Russo and a recurring aspect of their sales is a thematic auction that pairs with the main auction. The two so far have been the inaugural Glamorous Day Date Sale and the Only Watch charity auction, but this time, they have really chosen something that is very dear to many vintage collectors – stainless steel chronographs. Perhaps its the sense of functionality and the no-nonsense attitude of stainless steel that contributes to its popularity, but for whatever reason they are in-demand, Phillips has quite the special line up.

Of course, this sale has been covered by many journalists, with the usual Daytonas with quadruple, red, reverse triple underline rainbow Khanjar (you get the point) and stainless steel Patek’s that have been touched by God himself all across the web. There is no doubt that these are truly stratospheric and unique timepieces, but we here at Bexsonn wanted to highlight some other pieces that perhaps may not get the same limelight, but are worth taking notice of in their own right. Cutting to the point, we just wanted to share the watches we liked. 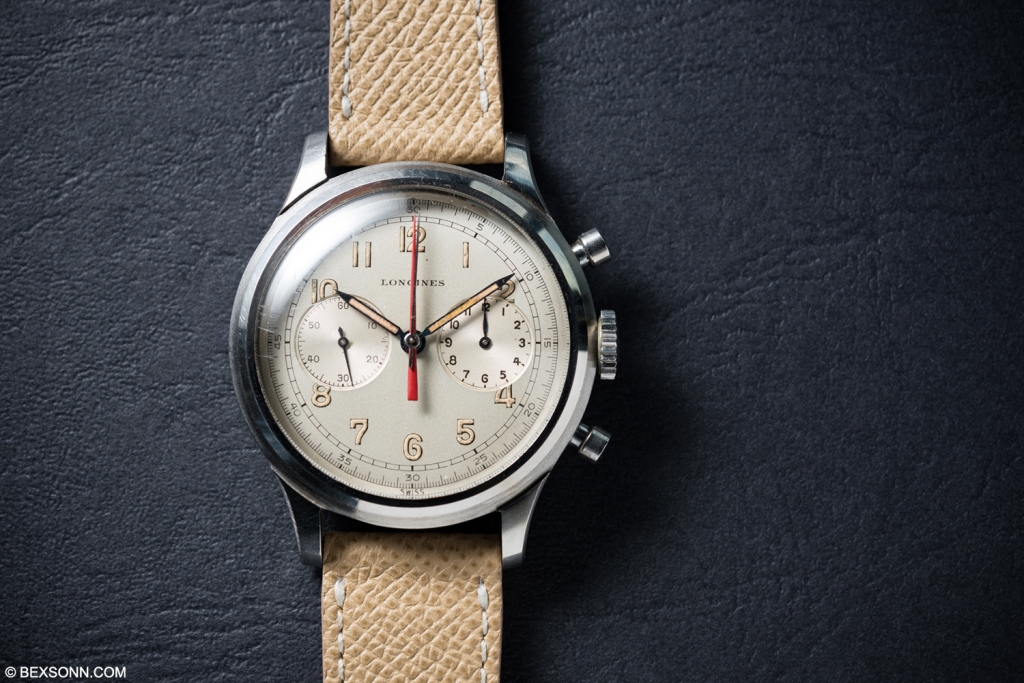 Longines feature heavily in this auction, and rightly so. If there was a 20th century watch manufacture that would best represent the stainless steel chronograph, it would have to be Longines, with both the legendary 13ZN movement and 30CH movement, later on heralded to be some of the greatest chronograph movements of all time. Within that, lies this Ref. 5699, nicknamed ‘Doppia Lancetta’, which translates to ‘double hand’ due to the presence of what looks to be two central seconds hand. The red hand, is in fact a minute counter, which made this chronograph setup quite different to the standard three register dials. This Longines from 1947 houses the in-house calibre 13ZN and as many have said, it really is as good as it gets. At 39.5mm, this is huge for a vintage watch, couple that with the unique dial configuration and what you get is one of the most desirable Longines watches in the world. 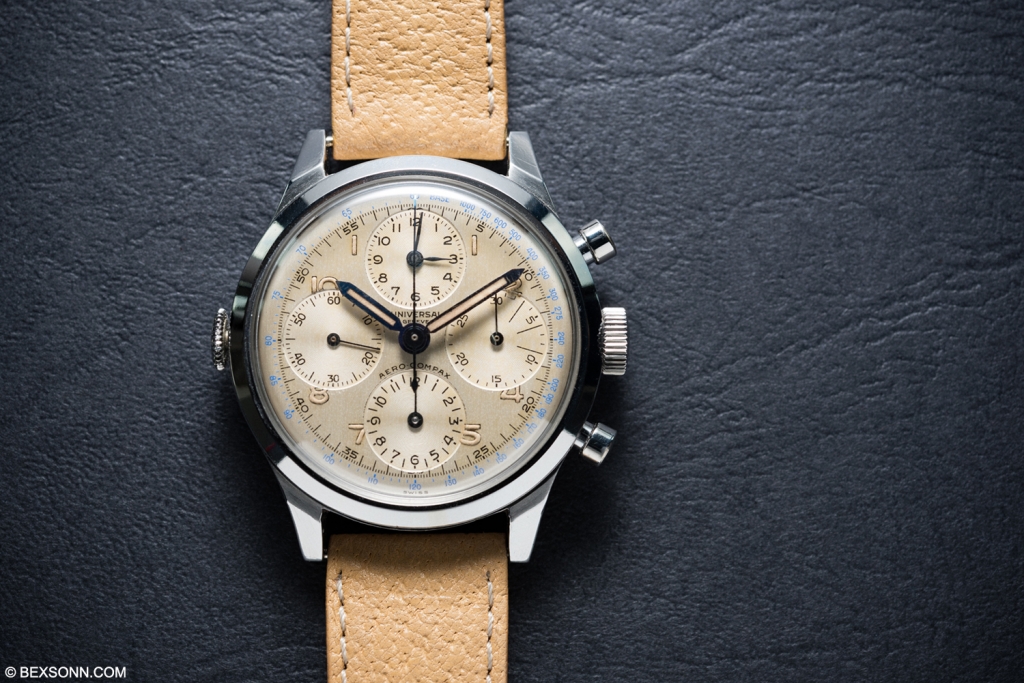 No introduction is needed for the meteoric rise of Universal Genève as a collectible vintage brand. Seeing a Tri-Compax in the wild still makes me look twice but what Phillips is offering is one step ahead of that. The Aero-Compax does have some military provenance with the complication of the watch suggesting so. With the subsidiary dial at 12 o’clock being a ‘memory’ register, where the user could set the time with the crown at 9 o’clock in order to establish a start time when timing, this was especially useful for pilots and military personnel to mark the start of a mission. It’s important to note that the dials of Universal Genève watches, especially the calendar models, are known to tarnish a lot, which makes this Aero Compax even more desirable. With a light patina to the dial and creamy intact lumes, in this fantastic condition, it is a true collector’s piece. 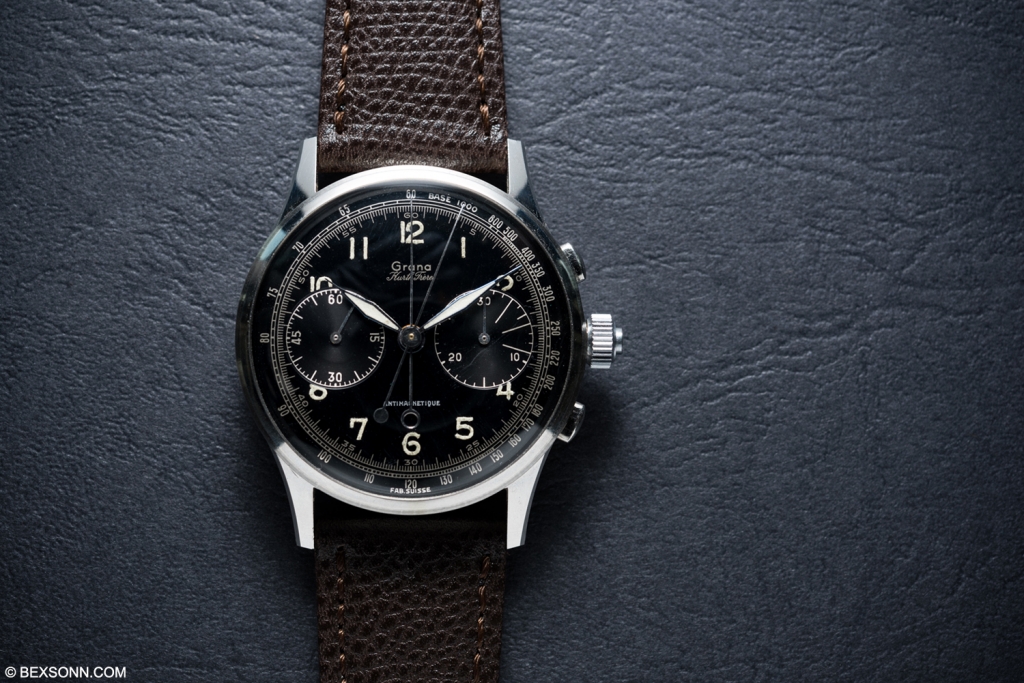 Grana is not a well-known brand, but to keep things simple, they were a sub brand of Certina, who manufactured all of their watches. This brand, is perhaps most well-known for supplying the British Ministry of Defence with W.W.W. watches in World War II, alongside 11 other brands making up what is known today as ‘The Dirty Dozen’. What is also known about these W.W.W. Granas, is that they are the rarest of the dozen to attain and one in good condition can fetch up to 10 times more than other W.W.W. watches. So, we’ve established that Grana is a brand that is not that familiar, but have pieces out there desperately sought after by collectors. What Phillips is offering in their thematic sale is not one of those, but instead a split seconds chronograph with a black lacquer dial, which is, perhaps even rarer. Housed inside is a manual winding Venus 175, a ‘workhorse’ split seconds chronograph (all things are relative right?) that is famed for being in quite a few other brands’ split second models. As Grana chronographs with black dials are known to be military pieces, the great condition this one is in, and the lack of military markings led Phillips to believe that this was simply an unissued piece, making it another gem among the offering. 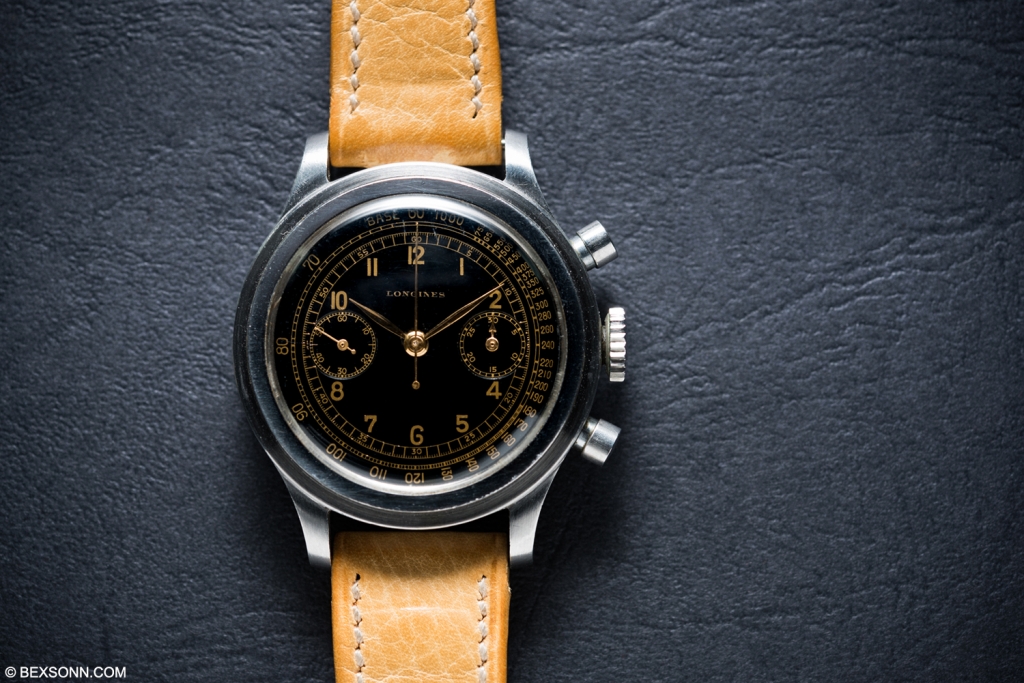 Another 13ZN here, we chose this simply because of how it looked. The 37.5mm stepped case with round pump pushers and a black gilt dial with arabic numerals is to me, one of the best looking watches, in the most non-pretentious and intuitive way. The proportionality of all the design aspects work so well, and while the 30CH movement is in fact an improvement to the 13ZN, the reason why they are priced so much higher than its successor is because they are housed in cases, with dials like this. A true tool watch, the fact that it has a black dial makes it rarer, as simply stated, they didn’t make many black dials back then, other than for military purposes. Furthermore, to add to this Ref. 4974’s rarity, it has a ‘Tre Tacche’ caseback, sought after by collectors which translates to the ‘three notches’ found on the caseback. 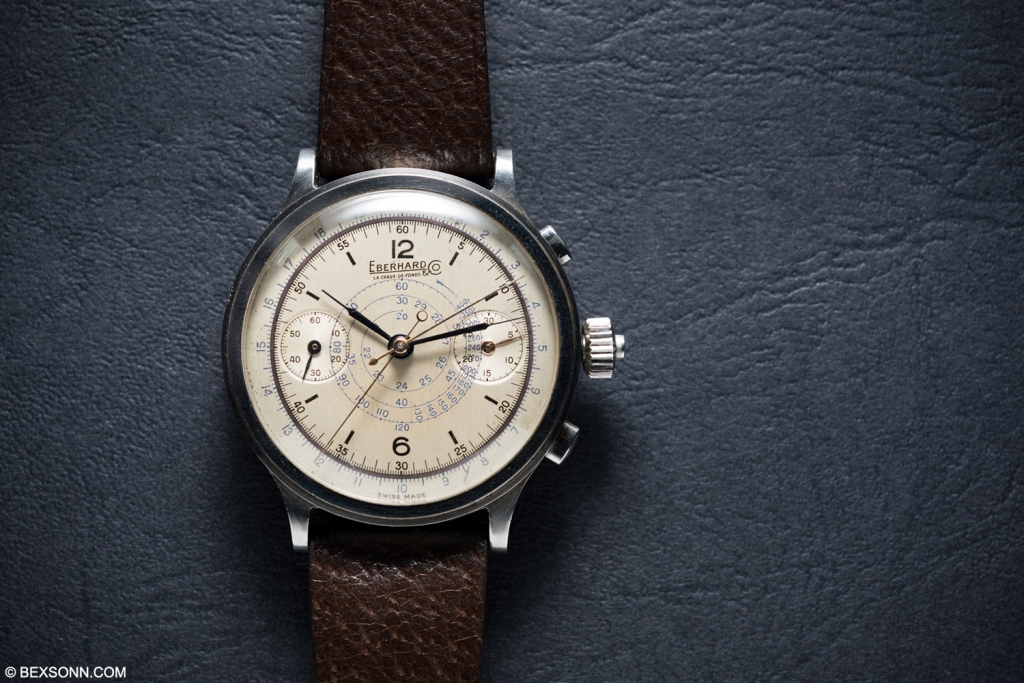 This is an interesting split second. Powered by a Valjoux 86, the buttons on this Eberhard do not correspond as a normal split seconds should. The start, stop and reset are all controlled by the pusher within the crown and the top pusher is used to control the split seconds function. The bottom pusher, at 4 o’clock, is a slide that when activated, stops the time and locks it in, so that accidental re-activation of the chronograph is not possible. Pretty useful so that the user never loses his measurement if you ask me. Contemporarily sized at 40mm and with a beautiful telemetry dial, composed of just the right amount of patina, it is certainly a very attractive piece.

So there you have it, a handful (literally) of our favourites of this epic auction taking place on the 14th of May. While getting up close and personal with these timepieces is quite the experience, and you have to take your hat off to the folks at Phillips for their incredible job, I can’t help but agree with a certain Mr. Clymer, who questioned the connotations of this incredibly curated auction. As for many collectors, most of the joy is in the hunt and when they are presented as such, so easily attainable with a disposable income, does that make it as gratifying? Who knows. But one thing is for sure, the use of “Epic’ to describe this all stainless steel chronograph auction, couldn’t be more appropriate!

For more lot information on The Phillips Geneva Start-Stop-Reset auction that will take place on the 14th May in La Reserve Hotel, Gevena, visit the official Phillips Watches website to view the entire catalogue. 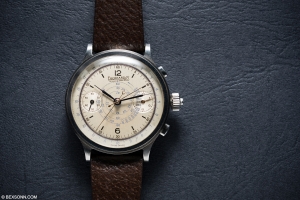 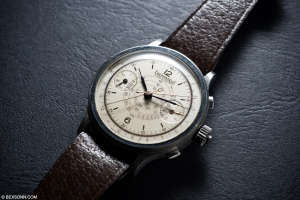 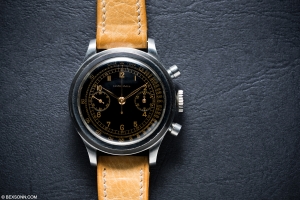 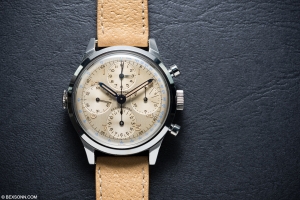 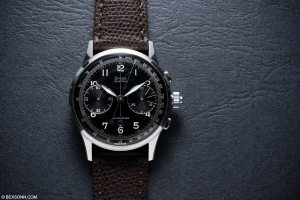 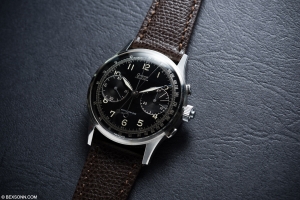 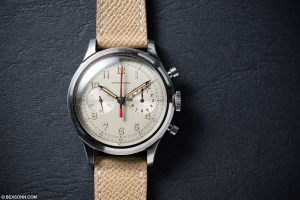 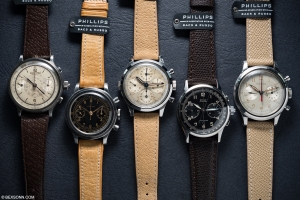 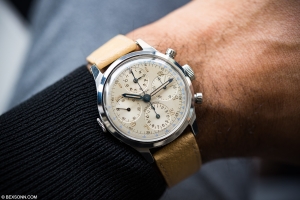 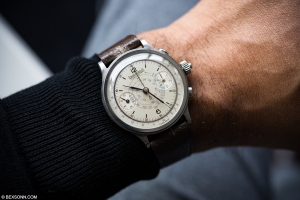 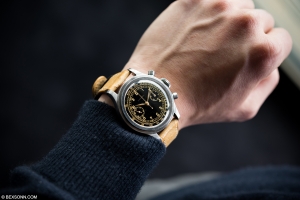 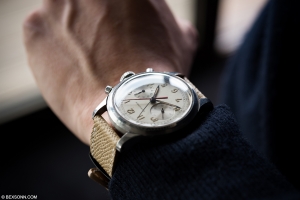 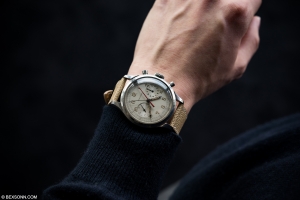 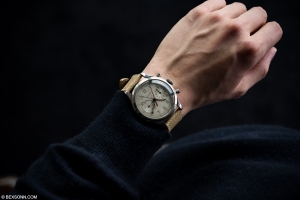