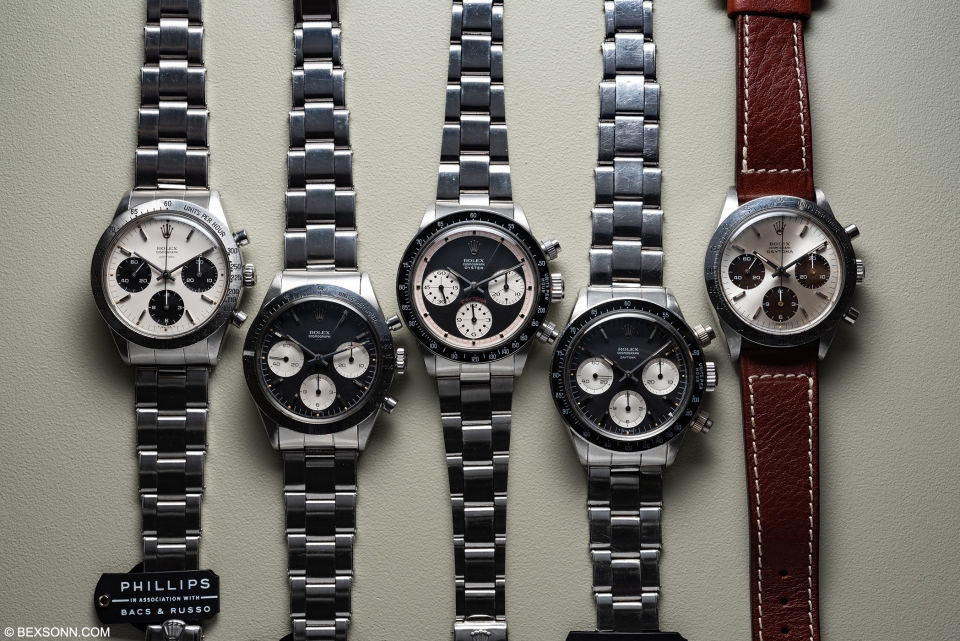 Yup, it’s that of the year and riding the wave of success from their previous sales, Phillips are back once again with some exquisite timepieces for their thematic auction: The Daytona Ultimatum. It goes without saying there’s some outstanding timepieces up for auction outside of the high-profile Unicorn – the only known example of a white-gold Daytona 6265. Over the weekend we spent some time at their Berkeley Square, London offices, to get up close with some of the rarest and truly stunning watches that will be auctioned over the weekend of the 12th & 13th May. In typical fashion we decided to pick out some of the lots that should be taken note of for very good reasons.

As many of you may or may not know, this isn’t the first time the man at the helm of the Phillips Watch department [Aurel Bacs] has hosted an all Daytona auction. Back in 2013, The Christies’ Rolex Daytona Lesson One sale was held, where 50 variants of Rolex’s iconic Daytona model were up for sale, at the time of this sale one Mr. Bacs was in charge of the Christie’s watch department. This was a momentous occasion and while only 150 seats were available in the auction room, by the time it started, 300 people had filled the room, immediately signalling the importance of this sale. 5 years on, and just a few months after selling the most significant Daytona to come to auction [Paul Newman’s Daytona], Phillips in Association with Bacs & Russo have assembled an auction dedicated to Daytonas. 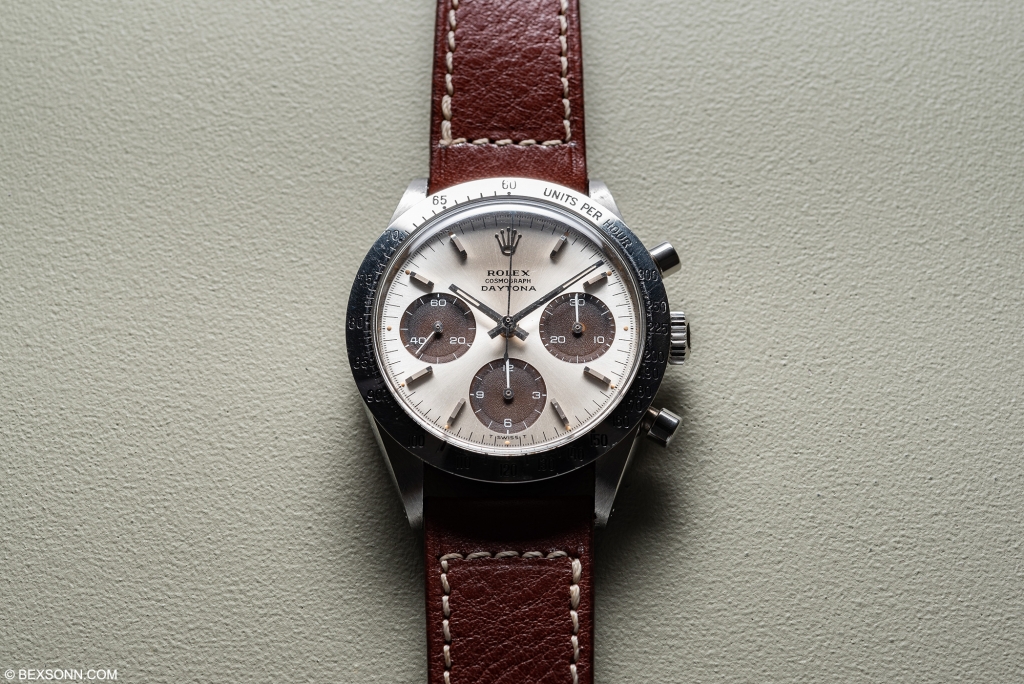 The reference 6239 is the first Daytona ever produced by Rolex and marked the beginning of a new chapter in their history, that Rolex gave a name to their chronograph (though this didn’t officially happen until 1964) and also the first time the tachy-o-metre scale was placed on the bezel. This particular example features a bezel that is calibrated to 300 units, correct for early examples such as these, having been kept in excellent condition with the black enamel still present. Moreover, the movement bridge is stamped ROW, denoting this watch was made for export to the USA. This lot not only features a case that is in exceptional condition but also a dial that makes it even more covetable by Daytona collectors. 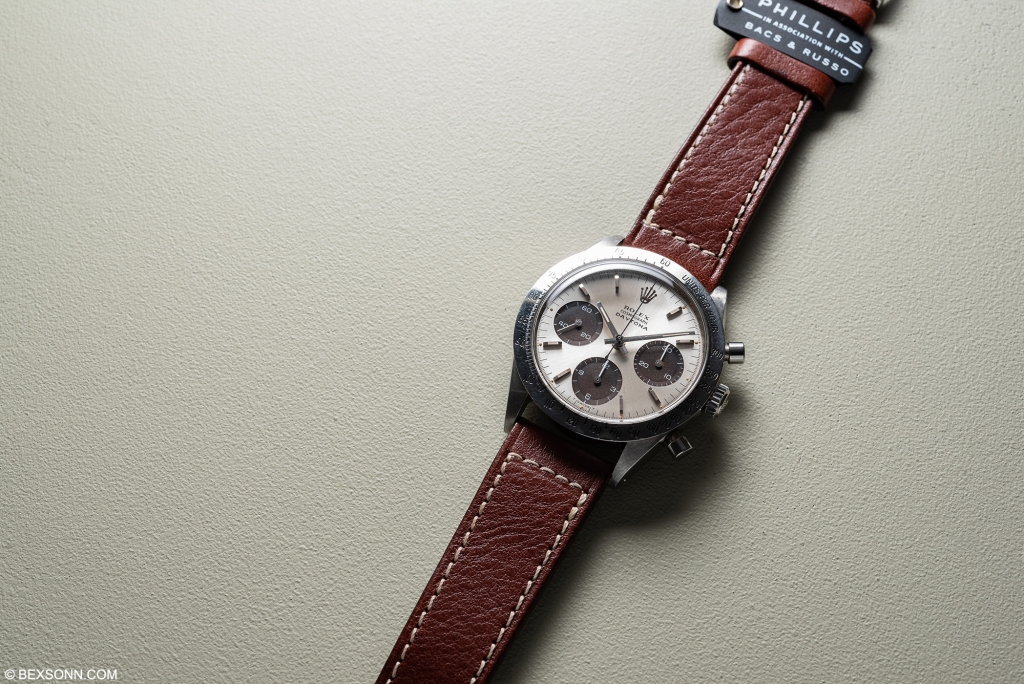 This early reference 6239 also features seldom seen tropical subsidiary dials. These sub dials have aged in such a uniformed way, from their standard black form to a warm chocolate tone that offers a lovely contrast to the silver dial, lending to the nickname Mr. Brown. Furthermore, earlier reference 6239s featured a small Daytona script below “Rolex Cosmograph”, however, Rolex also introduced a different dial layout which displayed a slightly larger “Daytona” font below the “Cosmograph” inscription. These early dials display Rolex constant strive to experiment with design composition. It was only much later that Rolex settled on the printing of the “Daytona” designation above the subsidiary register at 6 o’clock. 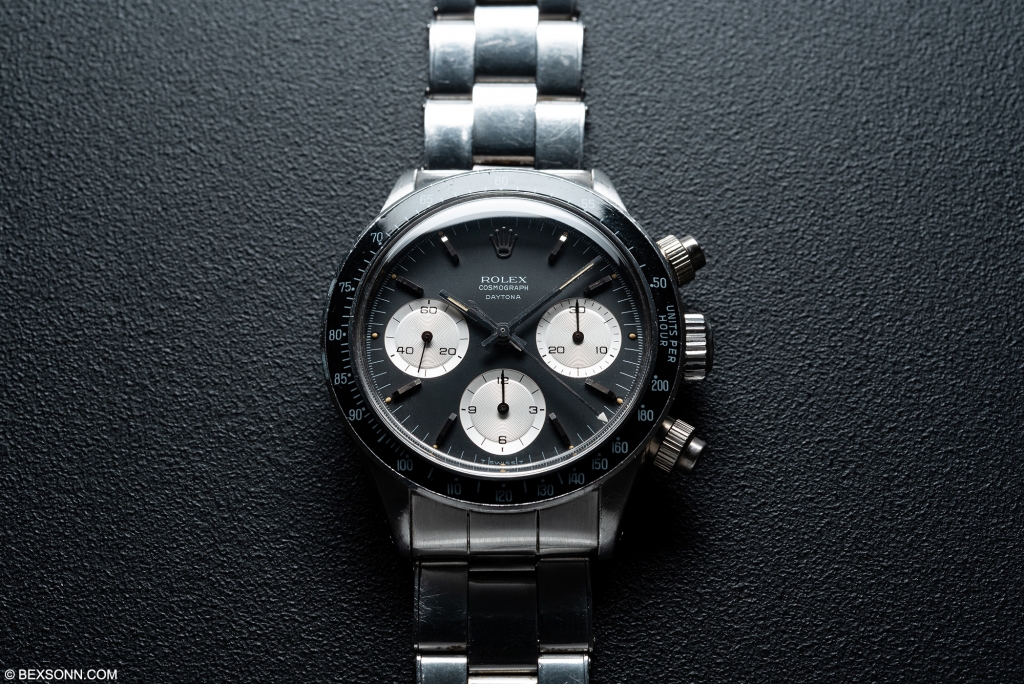 There are many idiosyncrasies in the early Daytona collection, perhaps ones that don’t jump out at you straight away but once you notice it, it becomes simply hard to miss. The Daytona 6240 herald another chapter in the Daytonas long and illustrious history. 1965 marked the screw-down push piece era of the Daytona but more interestingly the 6240 was the only reference of the Daytona to be exclusively manufactured in steel. It also only featured an acrylic bezel with tach-o-metre scale. The 6240 is largely known by scholars as a transitional Daytona and was eventually succeeded by the 6263 and 6265. 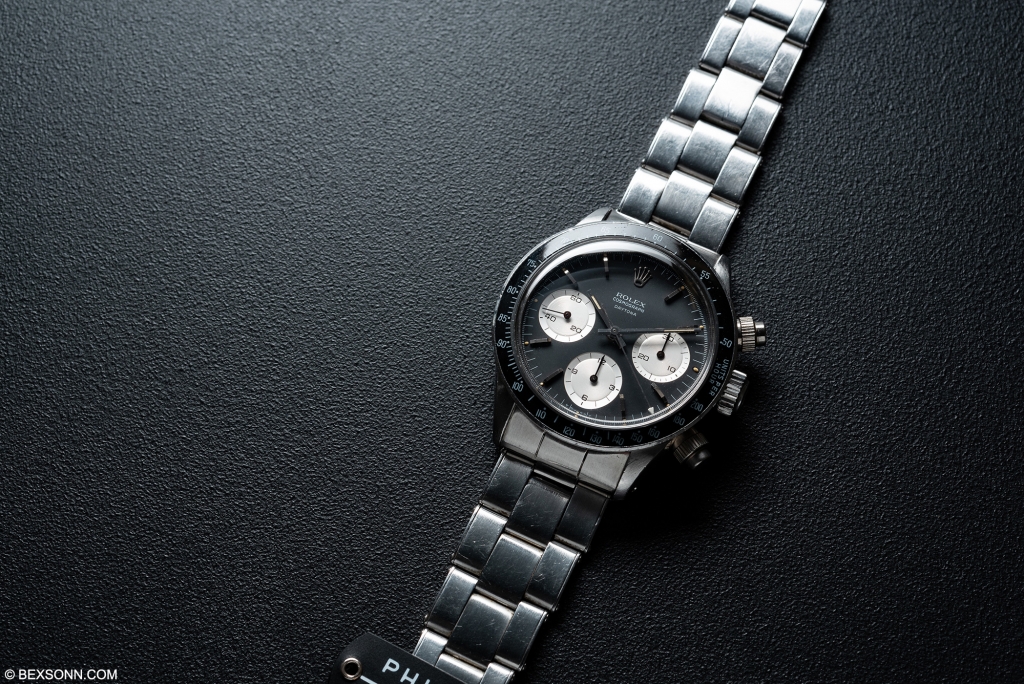 The 6240 is known to have been fitted with an array of dials, that range from the very famous “Solo Rolex” which has been sold by Phillips before, to the dials where the placement of the wording “Daytona” differs. This particular example features some unusual traits. While we know that the 6240 features screw-down pushers and crown, it is void of the designation ‘Oyster’. However, the dial displays ‘Rolex Cosmograph’ with ‘Daytona’ suspended below in a smaller font. As this timepiece shares the same dial configuration with the ‘Floating Dial’ reference 6239, one can only devise that Rolex used existing dials while testing out its new and innovative ‘Oyster’ chronograph model. Furthermore, the dial has also turned from black to a dark grey hue. 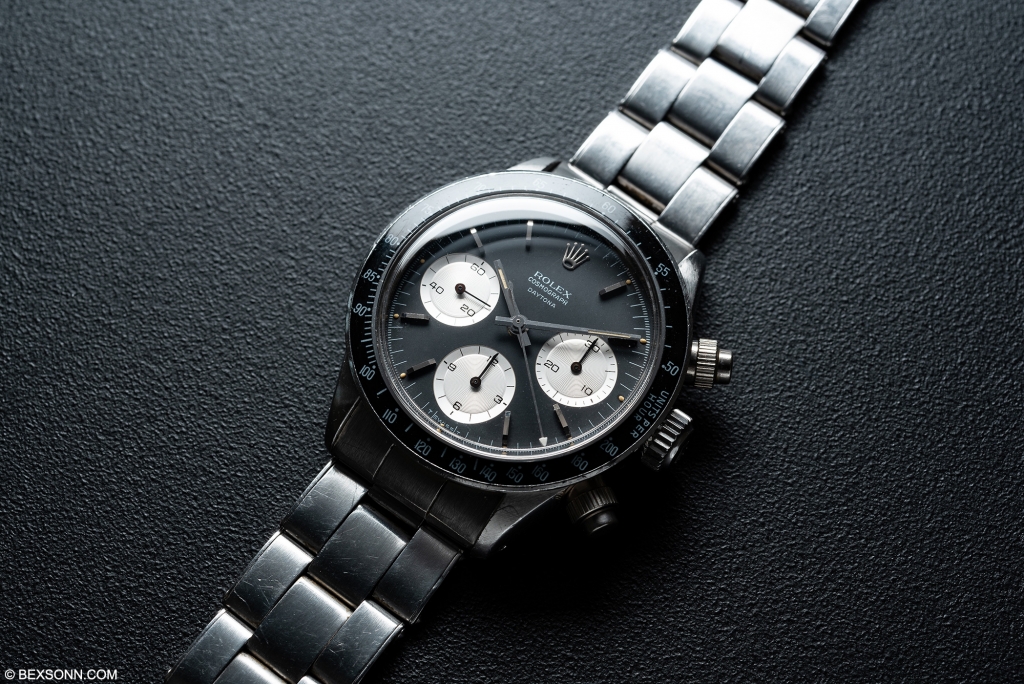 This 6240 also features period correct MK0 brass push-pieces, sporting flat and fine grooves that are referred to by collectors as ‘millerighe’. The importance of this ref. 6240 Daytona, coupled with its patinated and well-preserved case makes it a lot that should be taken note of. 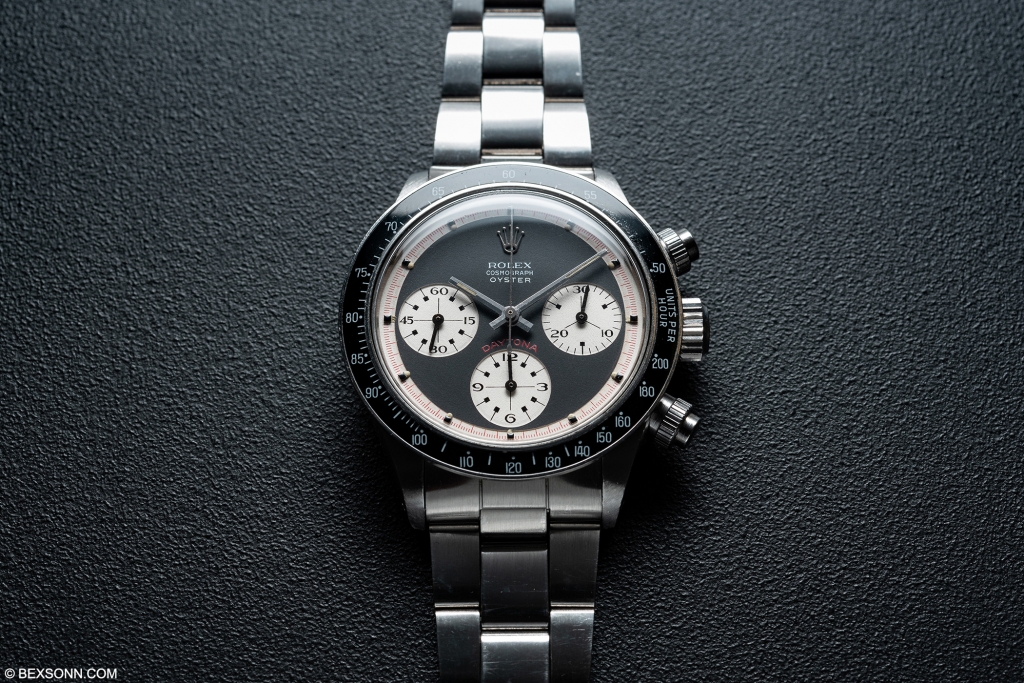 It would be hard to look at this Daytona Ultimatum auction and not mention the iconic ‘Paul Newman’ Daytona. Without doubt, the most sought-after Daytona of them all has to be the exotic dial Daytona 6263 ‘Oyster Sotto’ (Oyster Beneath/Under) Cosmograph, simply because of its rarity. It is believed, by Rolex scholars, that less than 20 examples have ever graced the market. But what makes this ‘Oyster Sotto’ standout even more is it’s condition. It features a well-preserved case as well as original ‘millerighe’ pushers, correct bezel and a beautiful MK1 dial which displays just the right amount of aging. 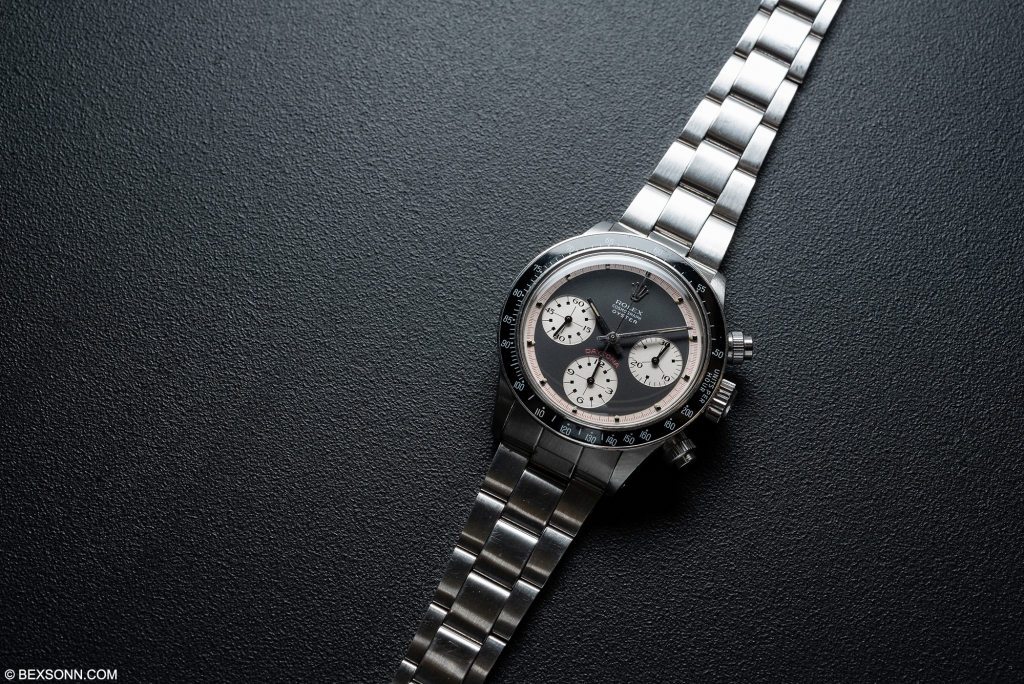 The ‘Oyster Sotto’’ denotes that this is indeed the correct configuration of a reverse panda dial 6263 ‘Paul Newman’ and it is widely believed that this is the only correct configurations, with the printing on the dial written RCO (Rolex Cosmograph Oyster) as opposed to ROC. However, a few years ago Christies did in fact sell a highly disputed and controversial black dial ROC Paul Newman Daytona 6263 for approx. $480,000. Though, this example is still highly believed to be incorrect by many Rolex scholars till this day.

Moreover, what is interesting to note is that ‘Oyster Sotto’ dials were fitted to the earliest 6263s that incorporated waterproof screw-down pushers. You see, it is known that these dials were originally fitted to 6262s and 6264s, so they only bore the inscription ‘Rolex Cosmograph’. The ‘Oyster’ designation was added later, which is why the type font doesn’t make use of serifs and differs to the ‘Rolex Cosmograph’ font. What’s more, Phillips in association with Bacs and Russo are responsible for setting a record-breaking price for an ‘Oyster Sotto’ at auction. 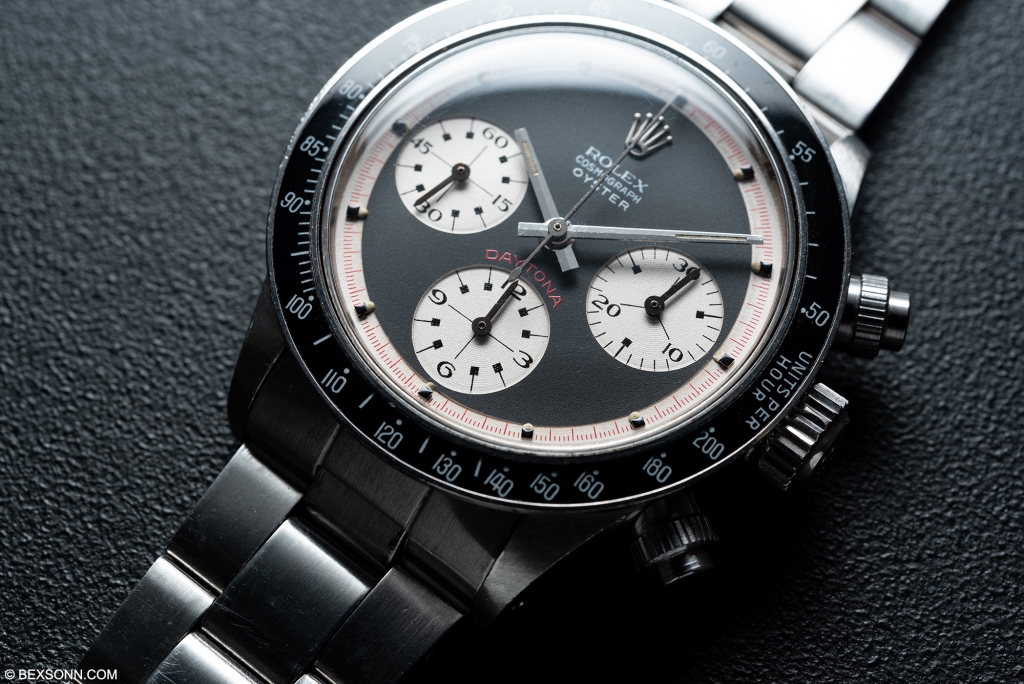 But there’s more, it’s offered with its Rolex ‘Garanzia’ dated November 22, 1972 stating the watch was sold in Pelloni, Rome. Situated on Via del Corso 140, retailer and jeweller Pelloni, which was eventually purchased by Hausmann & Co and still in business till this day. 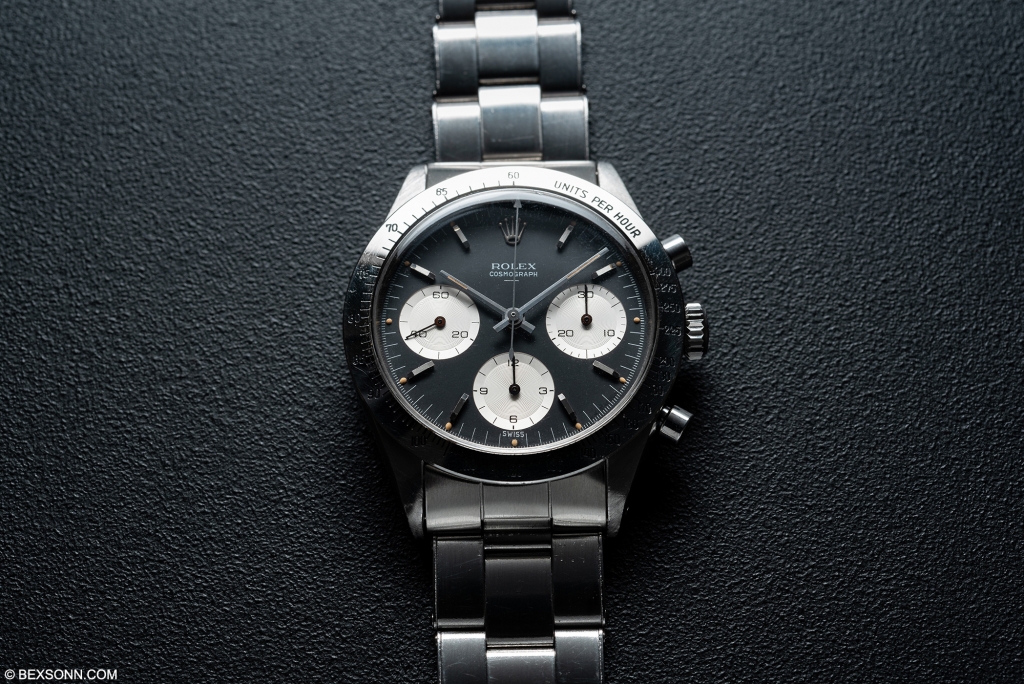 The reference 6239 is the first Daytona ever produced by Rolex, even though the watch had yet to be formally named as such. Introduced in 1963, for a very short period, the iconic chronograph timepiece for the first time featured an external tachymetre scale on its bezel. In addition, this example features a rare and sought-after, early bezel calibrated to 300 units but what is also important to note is that these bezels are marked at 275 and are hashed the entire way around, whereas later Daytonas include the use of dots. Moreover, this lot features a dial that makes it even more covetable amongst Daytona collectors. 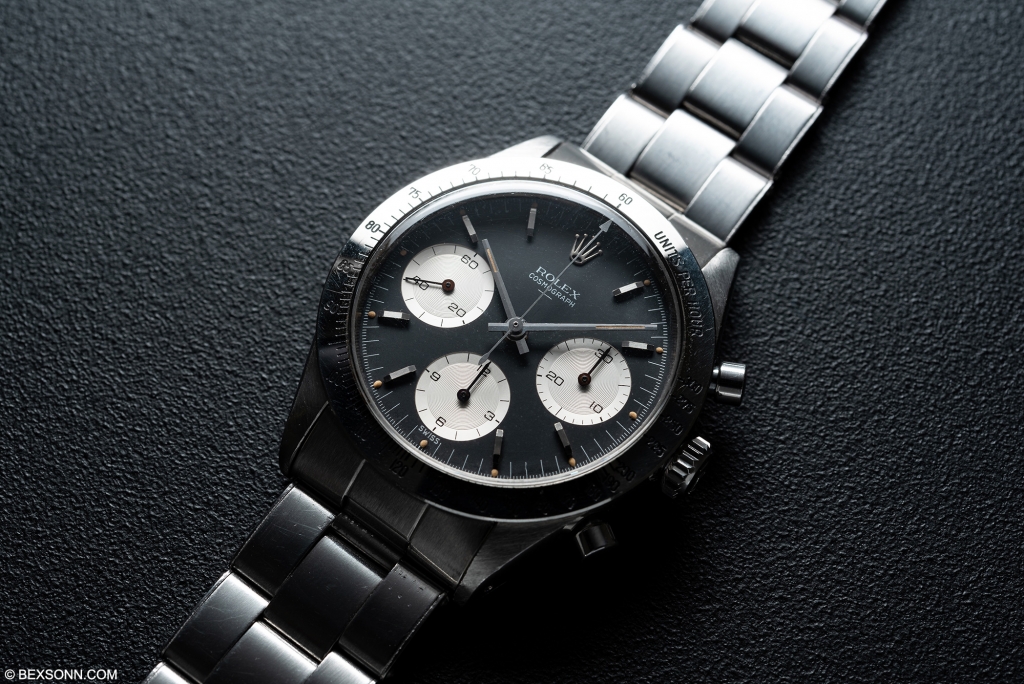 It sports a ‘double Swiss’ dial, something only seen on very early 6239s and what’s more, the dial is also marked with a short line just below the wording ‘Rolex Cosmograph’, hence the nickname “underline” but just why is this minute detail so important? The underline signifies the moment Rolex went from using the highly radioactive and extremely harmful radium material to the newer and safer tritium material. While Rolex have never confirmed this, collectors and connoisseurs alike have made an educated guess as to what this indicated. What you must also remember is that Daytona is omitted from the dial because the Daytona was given its name in 1964. 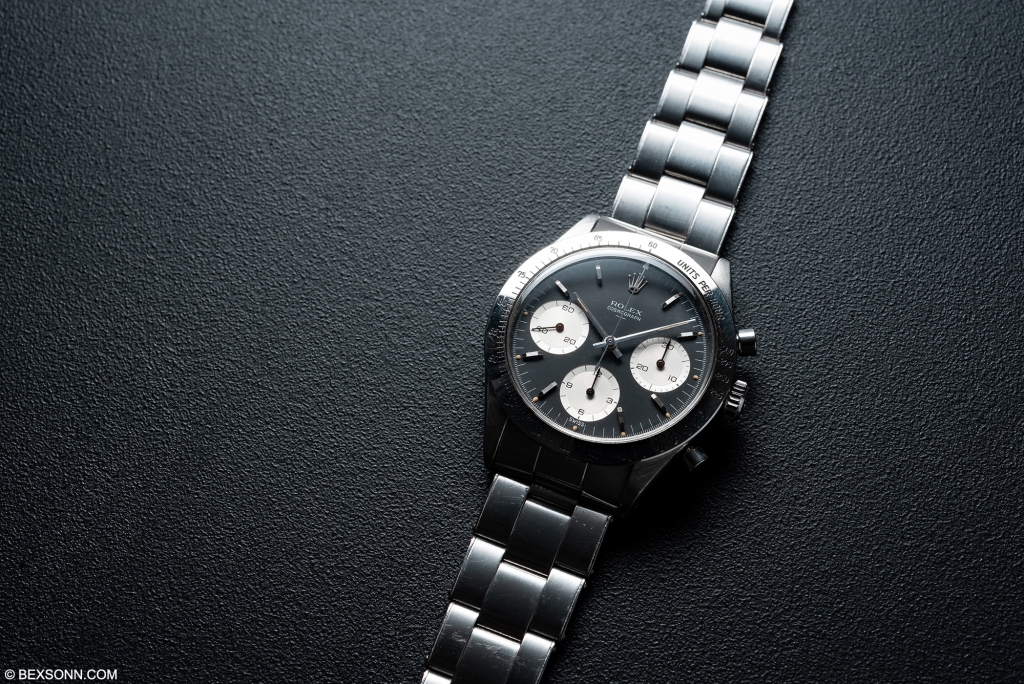 That said, another trait that most will notice is the fact that this 6239 also sports the original longer hands and while this may sound like a minor detail, it is indeed a detail that only collectors will fully appreciate. The matte black dial and white subsidiary registers appear to be in excellent condition, though the black has patinated to a dark grey. The importance of this ref. 6239 Daytona, coupled with its beautifully aged dial and well-preserved case makes it a lot that should be taken note of – personally these early underline “double Swiss” 6239s in this condition are in my opinion much rarer than their exotic dial siblings. 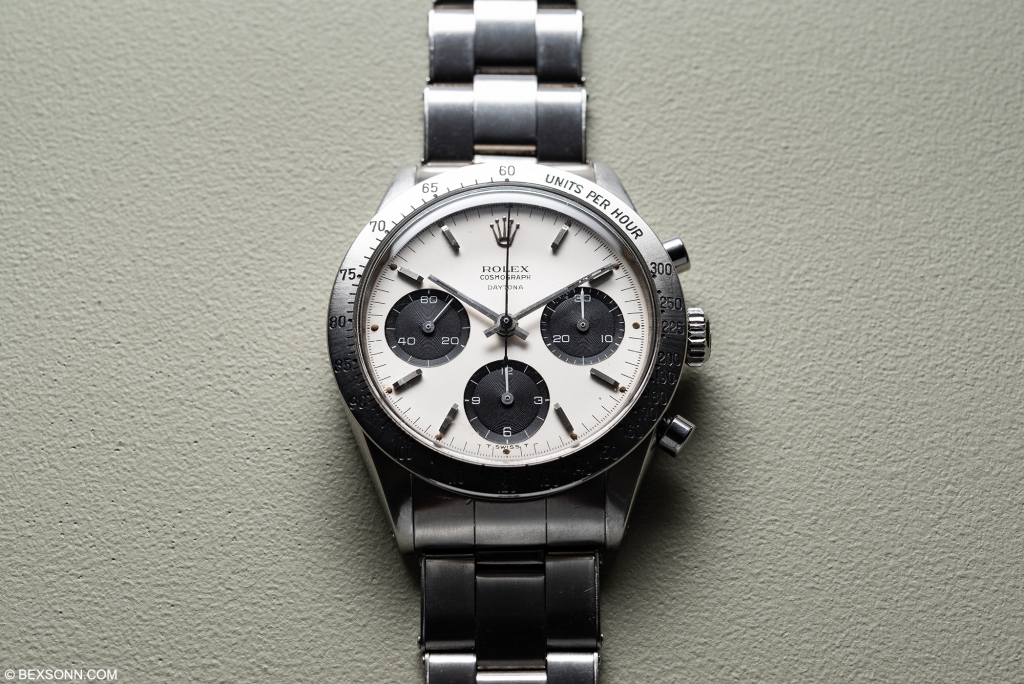 Last but by no means least, this humble ref. 6239 Cosomograph Daytona, while it may not look like much it suffices to say it was one of my personal favourite examples. As you’re already aware by now this reference was first introduced in 1963. This circa 1964 ref. 6239 is one of the first to bear the inscription “Daytona” signature, which appears to float below “Rolex Cosmograph”. It sports a matte white dial, otherwise known as a grené dial. This early example displays several minute but important details that yet again display Rolex constant strive to experiment with design composition. Similar to the early “Double Swiss” model, this dial displays a double “–T Swiss T–”. 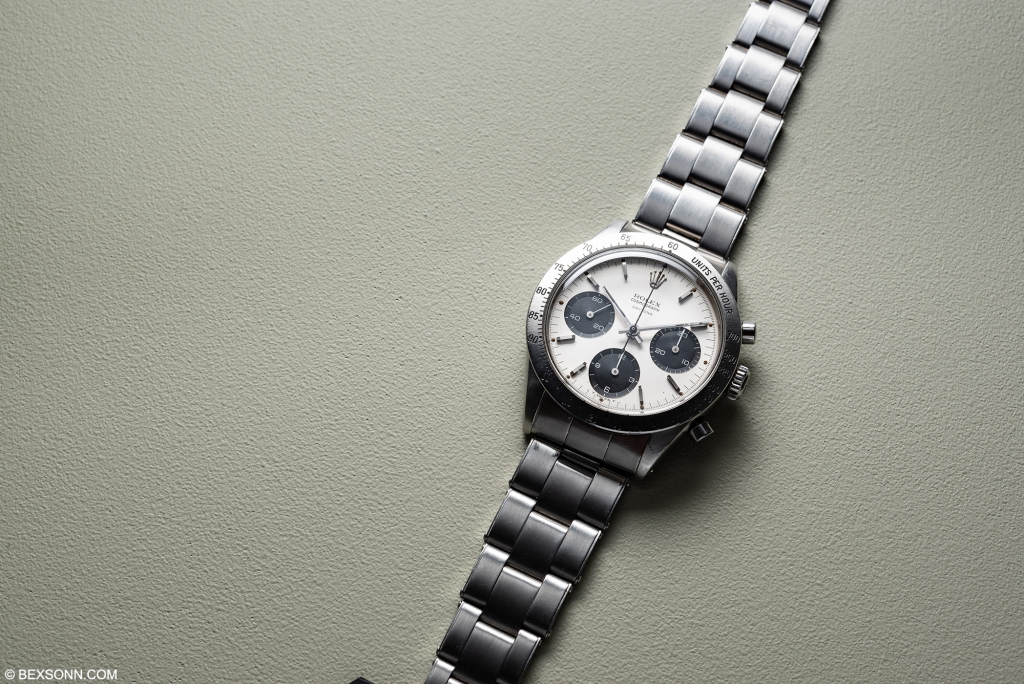 It is said that Rolex originally used dial stamps made for previous models as it began the Daytona production. As the bezel was larger, it covered a portion of the dial at 6 o’clock. Thus, they had to stamp “–T Swiss T–” again, this time immediately visible once fitted. The letters ‘T’ of course indicate the use of tritium. You’ll also notice this 6239 sports brushed bezel that is calibrated to 300 units, again, another small detail that collectors alike will notice and appreciate. The white dial does show signs of aging but remains honest and like many first generation “Double Swiss” 6239s, the watch is equipped with a ROW movement bridge, again denoting it was made for the American market.

For more lot information on The Phillips Geneva Watch Auction: Daytona Ultimatum that will take place on the weekend of the 12th of May at La Reserve Hotel, Geneva, visit the official Phillips Watches website to view the entire catalogue.