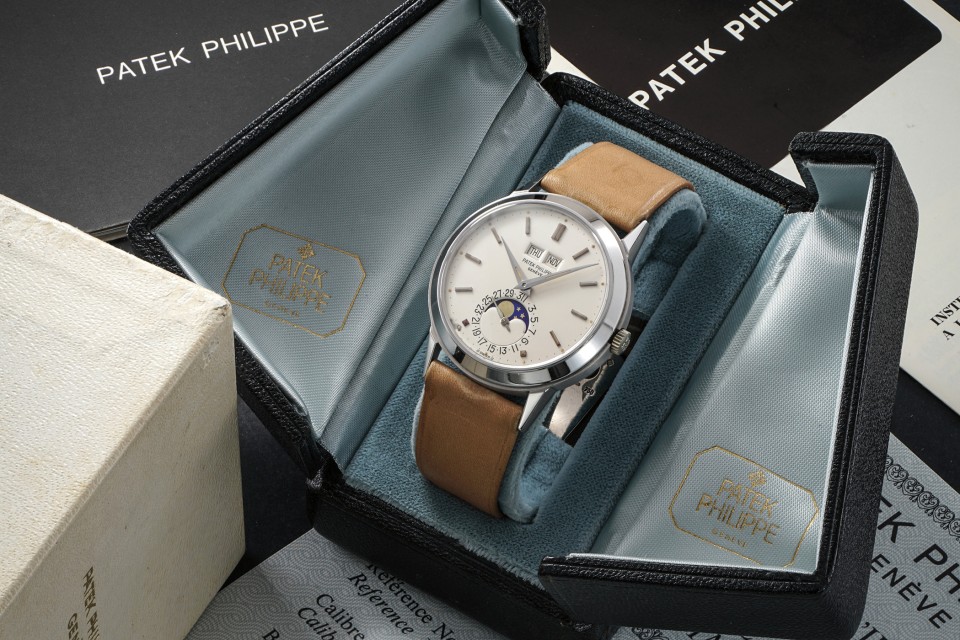 Thus far, 2022 has been a decent year for watches in general and I can only guess it will get even better. You’ll likely know that 2022 is the 50th anniversary of the Royal Oak and Phillips is celebrating this with a thematic auction for the Royal Oak, which we had a good look at when we popped by their Berkeley Sq. offices last week. We’ve covered many PHILLPS watch auctions in the past and as you’ll likely know, the Geneva auctions take place twice a year, one in May and the other in November. While we had the opportunity to see some lots in person last week, we didn’t get to see some of our favourite picks from the Geneva Watch Auction XV. So, we thought we’d share our thoughts on some of favourite highlights that caught our eye.

Lot 111: We all know the Omega Speedmaster as the watch that was chosen by NASA to be worn for the Apollo 11 moon-landing mission. What is much more fascinating than that is that there were pieces specifically made in secret for NASA after that period. Lot 111 is an Omega Speedmaster Alaska Project piece and though to the layperson it may look like an ordinary white dial Speedmaster, it is the details that really make this a historically interesting and important watch.

The “Alaska Project” was a code name used by Omega when they undertook this covert project for NASA to produce watches that were space qualified. Of course, this meant that these runs of watches were highly restricted in numbers and while these watches were made to be used in space the cancellation of the Apollo missions after Apollo 17, there was no immediate need for these watches. 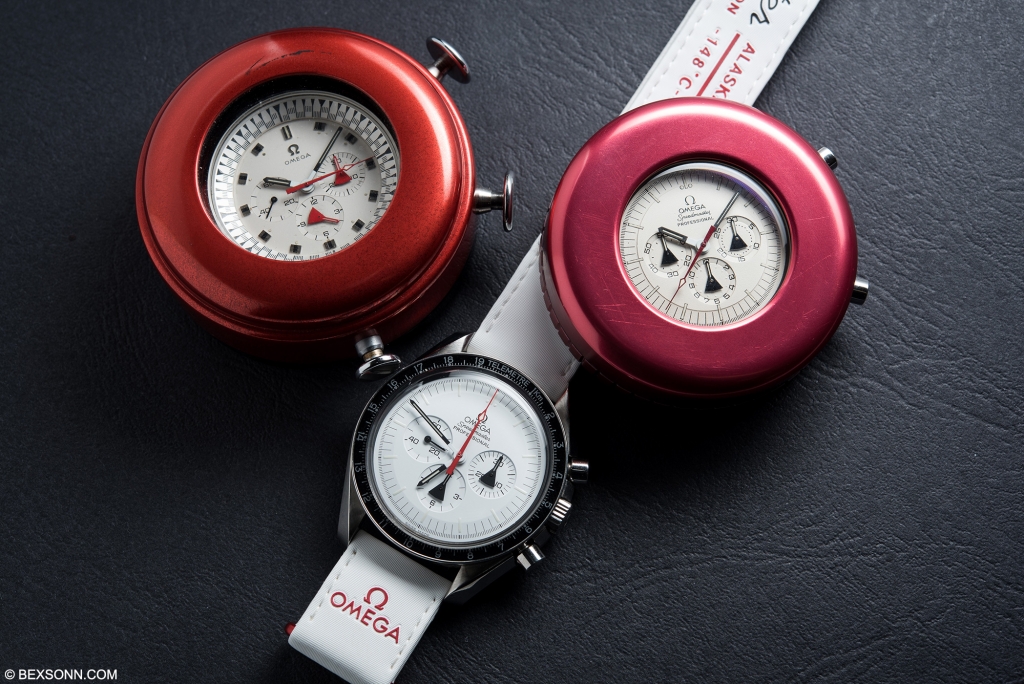 A trio of Alaska Projects

Omega continued working on this secret project, now titled Alaska II in 1970, with which they conducted further studies and produce more prototypes. There are a few “Alaska Project” watches that Omega made and assessed (pictured above), however, this example is part of the first batch of the Alaska II prototypes delivered in 1970 and as you can tell from the case, is closely related to the Professional.

The aim of the Alaska Project watches was to improve not only it’s usage in space but also its legibility too, the Alaska II was a culmination of technology used in the Alaska I with tried and tested case of the Moonwatch ref. 145.022. For instance, the case of this Alaska II is the same size as the Speedmaster Professional but also had the ability to be enclosed in a red anodized aluminium protective outer case that would shield it from harsh temperatures (like those in the image above). To increase legibility, Omega made the dial white but also used oversized sub dial hands – also known as Apollo hands – to improve the ease readability.

The “Alaska II” test watches were delivered to Houston in early 1970, however, while progress had been made the Apollo program had come to an end by late 1972 and so these watches were never retained or used by NASA, hence the reason this watch is available in this auction. This example is also accompanied by extract from the archives, which states it was a part of the first batch of Alaska II project series of protypes that were delivered to NASA’s Apollo Program Office in 1970.

Lot 216: The 3448 is a significant reference in the history of Patek Philippe; it marked the first example of an automatic perpetual calendar made by Patek. It incorporates design elements rather typical of the 1960s and 70s. Surprisingly, the 3448 is one of the very few complicated pieces Patek continued to produce even during the quartz crisis of the 1970s. Production of the 3448 ran from 1961 to 1981 spanning 2 decades, and was eventually replaced by the 3450, which was very similar in appearance but sported a slightly different case construction and featured a leap year indicator. According to research, there were less than 600 examples made in total during this period.

The 37.5mm ‘disco volante’ case of the 3448 was rather Avant Garde at the time it was introduced, and the case designed by Antoine Gerlach featured a partially recessed crown, which would have made it quite challenging had it been a manual wind watch – perhaps the reason the 3449 never went into production? The dial layout of the 3448 is simple yet informative and its symmetry lends to this balanced appearance. If I told you to close your eyes and think of what a perpetual calendar wristwatch looks like, chances are this is the design you’d see, why? Because brands have been rehashing this design for years, but Patek are the originators of said design. The elegant baton markers, along with the applied dot marker minute track and unfussy alpha hands – makes the 3448 so attractive (in my humble opinion). Then there’s the moon phase and date scale that sit snuggly at 6 o’clock, but in the pursuit of minimalism you’ll notice the dial is void of a seconds hand, which affords a purer look. 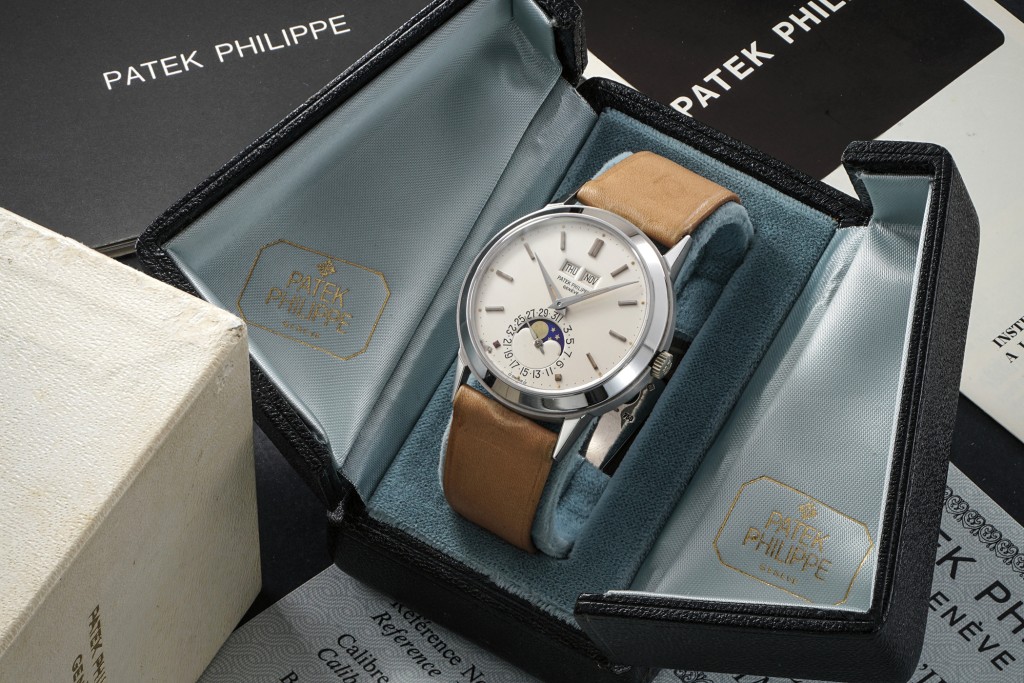 This example reference 3448 is cased in white gold which is quite the rarity, however, there is more. This piece also features lume plots and the original certificate, giving it an extremely rare combination of traits. That said, this isn’t the first time this watch has come to auction. It first surface in 2005 and was consigned by the original owner, it then surfaced again and was sold by Phillips in 2017 and is now being sold by the same buyer who purchased it from Phillips in 2017.

Lot 287: Over the past few years we’ve highlighted many Submariners, which exhibited the most beautiful, rare dials. I’ve said before that there is often an element of one-upmanship when it comes to Submariners and having one of the rarest pieces usually leads to interesting conversations. This reference 6200 is perhaps one of the most interesting pieces we’ve come across over the years. We are used to the fact that Rolex makes a mass of watches but when you consider the 6200 was made for a very short period and then consider how many watches they were producing at that time; you are left with a very small number of examples.

This present lot has a few things going for: its explorer dial layout, its Brevet “Big Crown” and its overall condition but perhaps its biggest trait I’ve never seen in any reference 6200 is its OCC inscription. We’ve seen 6200s that have nothing written on the dial and ones which only bear the inscription “Submariner”, but we’ve never seen one that also bears and Officially Certified Chronometer, something usually only seen on later reference 6538. Not only does this add balance to the dial but makes it truly rare and intriguing.

There is no doubt this early Submariner reference hasn’t lived a sheltered life; in fact, one would say that it appears to have lived quite an interesting one and this is echoed in its case and dial. The case, yet while well-preserved, shows signs of wear but it is honest. The bezel, which is original, also displays signs of wear. However, it is the dial that has seen the most dramatic change over the years and has patinated from a glossy piano black to an almost celestial appearance, which in my humble opinion looks rather splendid.

So, there you have it, handful of our favourite lots from the Geneva Watch Auction: XV. Phillips seem to continue to bring rare pieces to the market. That said, I don’t think this auction is brimming with the usual plethora of vintage pieces we are perhaps accustomed to seeing, though there are noticeably more modern pieces, and this is perhaps completely understandable considering the current climate and the fact that owners perhaps don’t want to let go of those super rare vintage pieces at this moment in time? Nonetheless, there are still great lots in there that may surprise a few of us, so I will happily be watching from afar to see how well these lots will perform.

For more lot information on The Phillips Geneva Watch Auction: XV that will take place on the weekend of the 7th & 8th of May at La Reserve Hotel, Geneva, visit the official Phillips Watches website to view the entire catalogue.