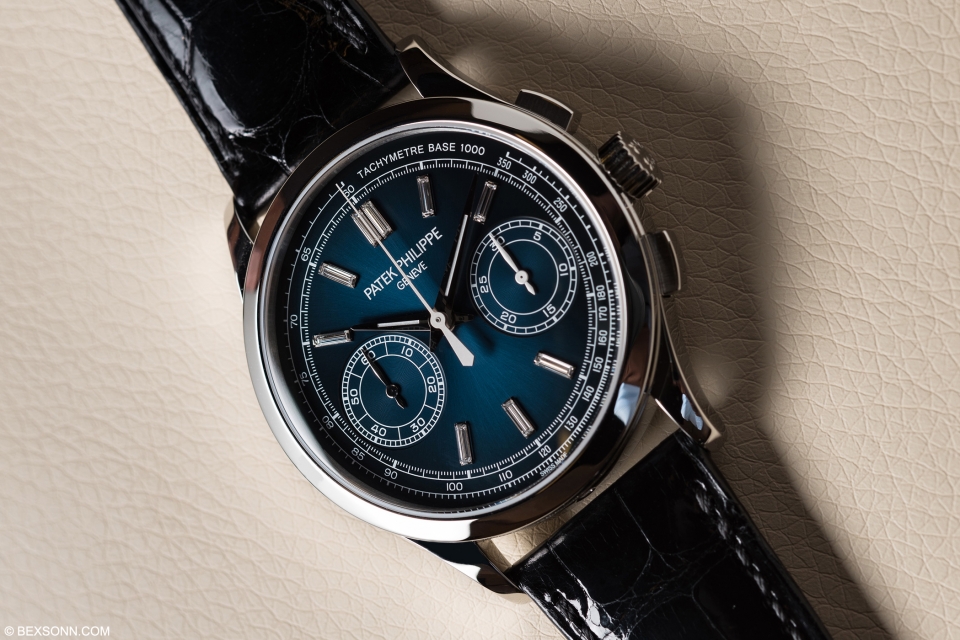 For the last few years Patek have surprised us with some of their new releases, and for better or worse, this year is no different. During our Patek meeting we were very excited to see one of our favourite pieces that embodies the quintessence of classic Patek, in a new case metal. The first 5170 was only available in yellow-gold but was discontinued some time ago, replaced by the 5170G, which was available with either a black or white dial with applied Breguet numerals. Then there was the 5170R (which we saw last year) that came with either a black or white dial, with rose-gold applied Breguet numerals. This year, the 5170 is now available in Platinum with, wait for it – baguette hour markers and a fume blue dial. 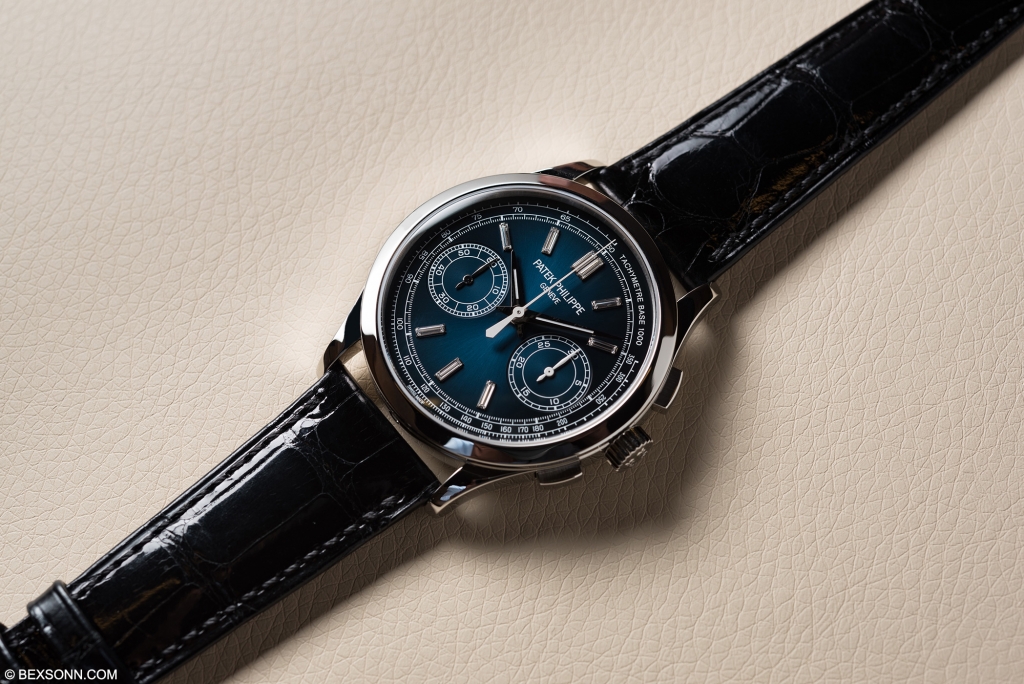 This new 5170P perhaps signals the end of the 5170 as we know it and with that in mind, Patek have knowingly added a little extra sparkle – in a last hurrah kind of manner. Like earlier iterations of the 5170, it uses Patek’s in-house manually wound chronograph movement the calibre CH 29-535 PS, which is considered to be one of the finest traditional chronograph movements in the world today. And of course, there is much to admire about the level of finishing. Unlike its predecessor, the 5070, which used the calibre CH 27-70 PS that was largely based on a Lemania movement but Patek completely reworked it, creating a beautiful chronograph movement nonetheless. 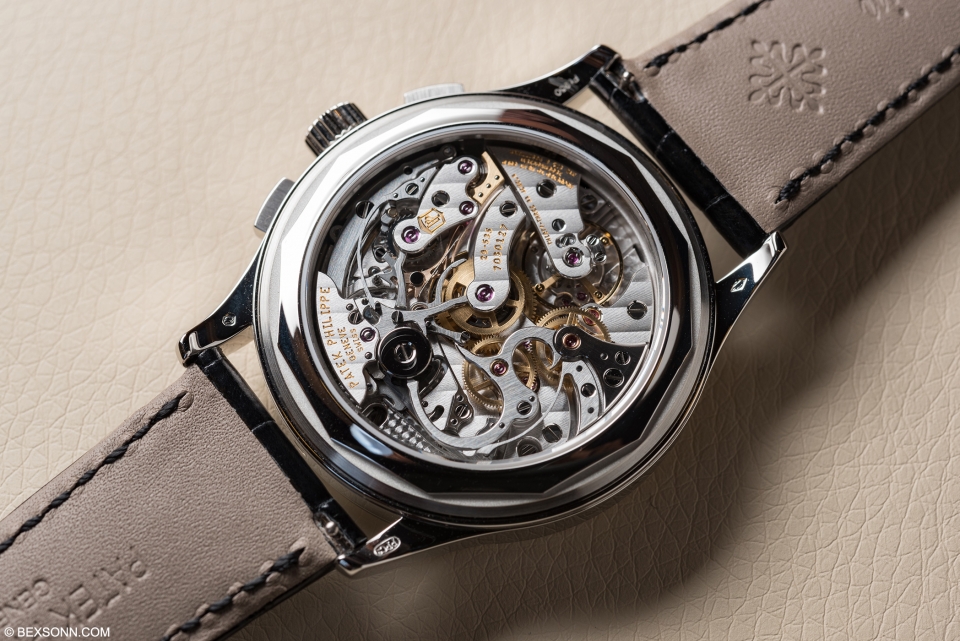 The platinum case of the 5170P measures a slender 39.4 mm and its flowing shape follows the traditional Patek Calatrava design. The lugs extend from the case band with a slight curve that aids comfort. The chronograph is operated with rectangular shaped pushers at 2 and 4 o’clock, which has been a typical attribute of Patek Philippe wrist chronographs for many decades. The crown is knurled for convenient winding with two fingers but small enough not to jab the wrist when the hand is bent back. Oh and just it case you forgot you were wearing a platinum Patek, you’ll find a diamond on the band of the case at 6 o’clock, just between the lugs. 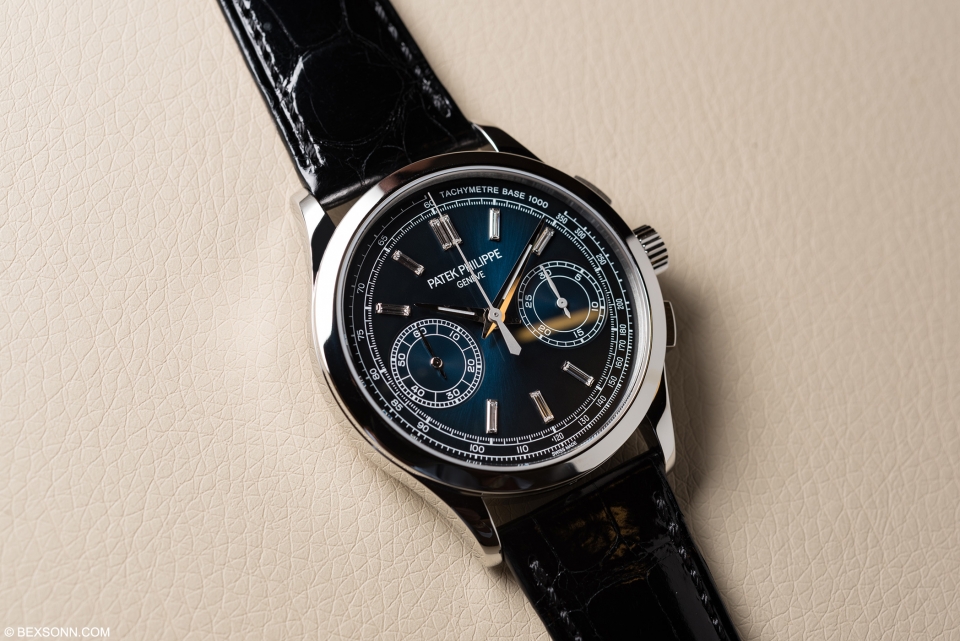 Beneath the sapphire-glass is the blue fume, sunburst dial, which differs greatly from all previous versions of the 5170. As already mentioned, it also sports baguette diamonds for hour markers, which are admittedly a lot less bling than one would’ve perhaps thought. That said, it is nice to see Patek make use of a tach-o-meter scale for the first time on the 5170, earlier variants only featured Pulsation scales. Just like previous iterations, the dial features snailed seconds’ sub dials at 9 o’clock and the 30-minute counter at 3 o’clock are recessed in the main dial and sit just below the horizontal centre axis, which balances out the dial nicely and these appear to have been enlarged too. Another subtle but noticeable change are the hands. This 5170P makes use of dauphine hands, as opposed to pencil style-hands and leaf-shaped hands from previous versions. 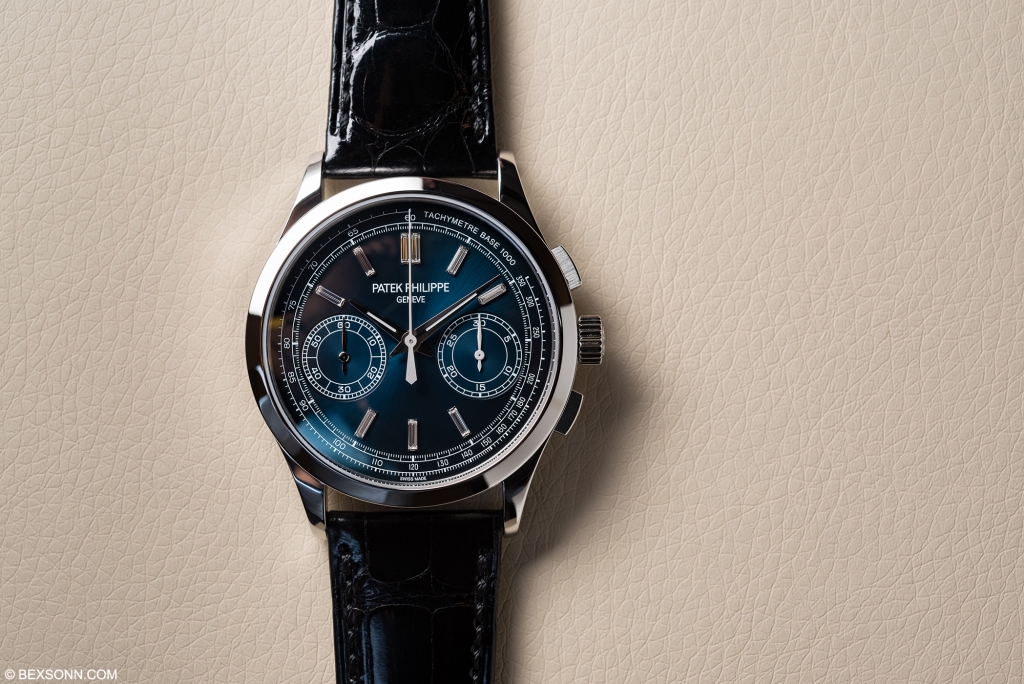 The Patek Philippe chronograph reference 5170 is, in my opinion, the classic contemporary timepiece that I’m sure will always be remembered as the traditional chronograph wristwatch of the 21st century. And while I’ve said it before, it would’ve be nice to see this chronograph in stainless steel – though Platinum is a welcomed addition despite the inclusion of a bit of bling.