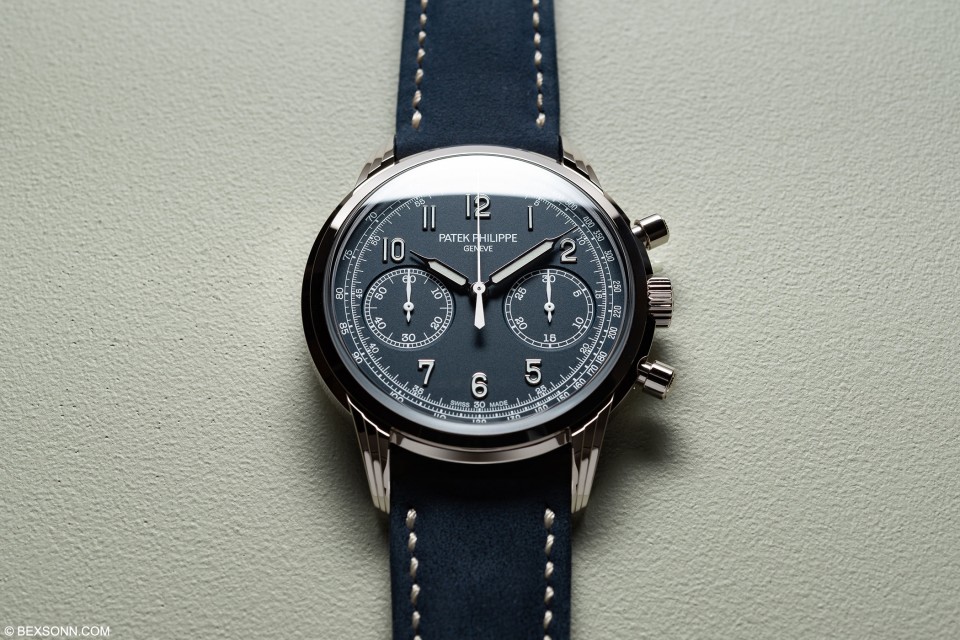 For the last few years Patek have surprised us with some of their new releases, however, this year felt a little different, a little familiar. During our Patek meeting we were very excited to see one of our favourite pieces that embodies the quintessence of classic Patek, albeit in a new case but with the same movement. The new reference 5172, is Patek Philippe’s next generation classic chronograph, which takes cues from the company’s historic pieces. As mentioned last year, that 5170P perhaps signalled the end of the 5170 as we know it, hence the reason Patek had knowingly added a little extra sparkle – in a last hurrah kind of manner and we were not wrong – the ref. 5170 is no longer.

The 5170 was the first Patek Philippe to make use of an in-house calibre chronograph complication; the calibre CH 29-535 PS. The previous 5070 calibre CH 27-70 PS was largely based on a Lemania movement, though Patek completely reengineered it, creating a beautiful chronograph movement, nonetheless. While the new 5172G is different on the outside, under the bonnet it is the same. In true classic form, the calibre CH 29-535 PS makes use of a column wheel and horizontal clutch architecture and a number of Patek innovations, making it super-efficient and precise. Innovations such as; the vibration-free chronograph hand movement that improves efficiency and reduction of mechanical wear, or the elaborate construction which assures that the small hand jumps within a fraction of a second, enhancing precision and legibility. Not only is the CH 29-535 PS precise but it is beautifully finished in faithful Patek fashion. The old-style bridges have been chamfered, polished, and decorated with Geneva stripes that can be admired through the sapphire-crystal case back.

The 18-carat white-gold case of the 5172G measures a little larger than the 5170 at 41mm, however it is 1mm smaller than the 5070, which puts things into perspective. The case features step lugs, not too dissimilar from those we saw on the 5320G released a couple of years ago and round pump chronograph pushers, akin to those from the 1463. Patek even went a step further in creating the same guilloche pattern found on the pushers of the ref. 1463 François Borgel case, adding some vintage flare. This subtle vintage touch is underscored by a cambered sapphire-crystal “box” glass extending across the bezel.

Beneath this box crystal is an all new dial with a blue background and contrasting white-gold applied Arabic numerals highlighted with a luminescent coating, white-gold baton-style hour and minute hands with pointed tips, also luminescent, a sandblasted central chrono- graph hand and a white, transfer-printed minute counter with its tachymeter scale – to which must be added the two railway-track scales encircling the small seconds and the chronograph’s 30-minute counter. All has been planned to ensure perfect legibility, whether in daylight or the dark. Though this new look may seem like a bit of a departure for Patek, this design actually appears to be inspired by a unique ref. 1463 made for Briggs Cunningham. The new Ref. 5172G is fixed to the wrist by a hand-stitched calfskin strap in a shade of navy blue to match the dial, with a white- gold fold-over clasp.

The Patek Philippe chronograph reference 5172G is definitely a retro-contemporary timepiece, which oozes sophistication but also clearly makes reference to the past. The incorporation of these little details is a rather nice touch, but is this something we are now perhaps seeing a little too much from watch manufacturers? Some would say yes but I like to see as the brands trying to perhaps educate new buyers, while showing off their heritage at the same time. The 5172G in my humble opinion is a gorgeous looking watch and it will be interesting to see how it develops over the next few years.