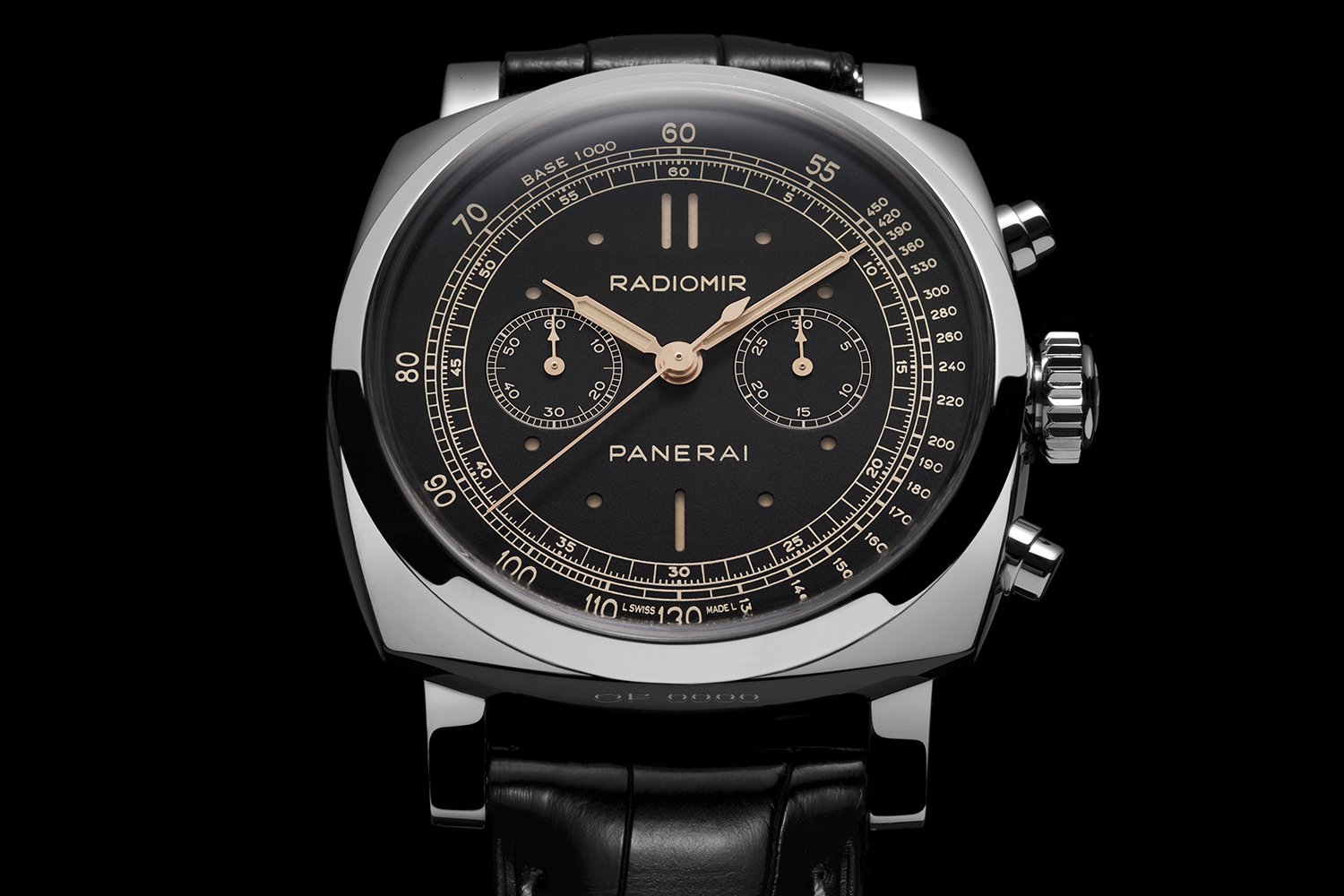 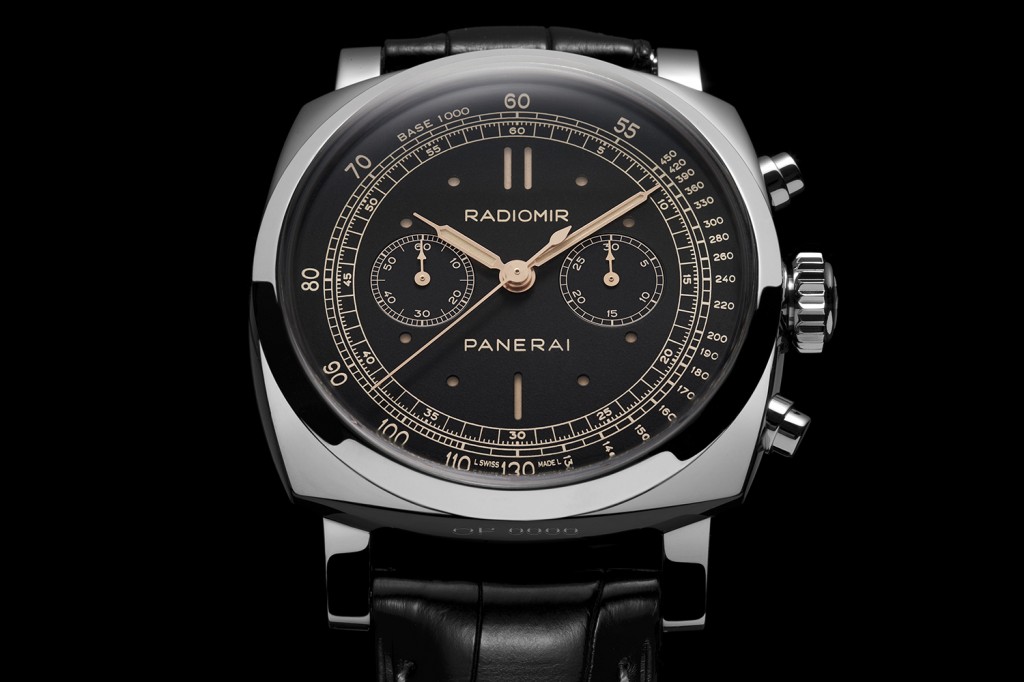 The Radiomir Chronograph is so un-Panerai like. It doesn’t resemble, nor is it even inspired by any particular Panerai model of the past. It is rather an amalgamation of various other Panerai’s and other timepieces in my opinion. The cushion shaped case is unmistakably Panerai, as are some of the dial elements, but the syringe style hands and tachymetre scale scream vintage – early twentieth century chronograph to be frank.

This new chronograph is simple yet still very elegant; it is these characteristics that make this latest offering from Panerai standout in more ways than one. The case measures, a slightly large but actually small in Panerai terms, 45mm in diameter. 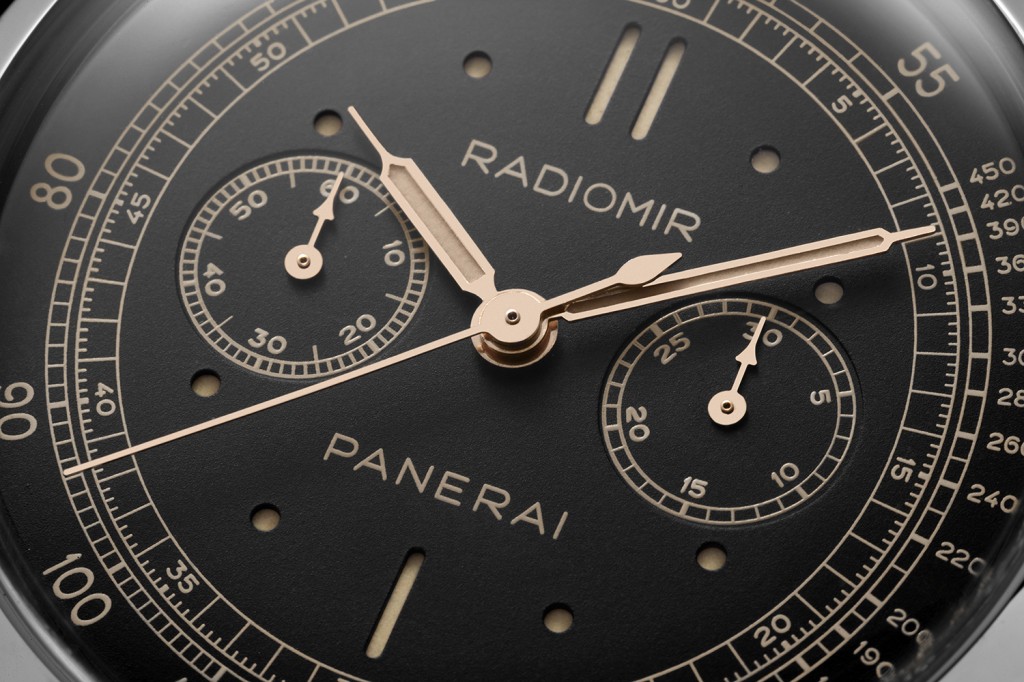 The dial of the new Radiomir 1940 Chronograph has some subtle variations depending on the metal of the case. The red-gold version has a brown dial with the combination of graphic hour markers, Roman and Arabic numerals that has acquired the name California, adopted by the Radiomir of 1936. The platinum version has the ivory dial, with simple baton or dot hour markers and the same design distinguishes the black dial of the white gold version. The latter has a dial with the sandwich structure, formed of two superimposed plates with the luminous material between them, visible through holes corresponding to the hour markers. Common to all three versions is the tachymeter scale for calculating average speed and the two chronograph counters. 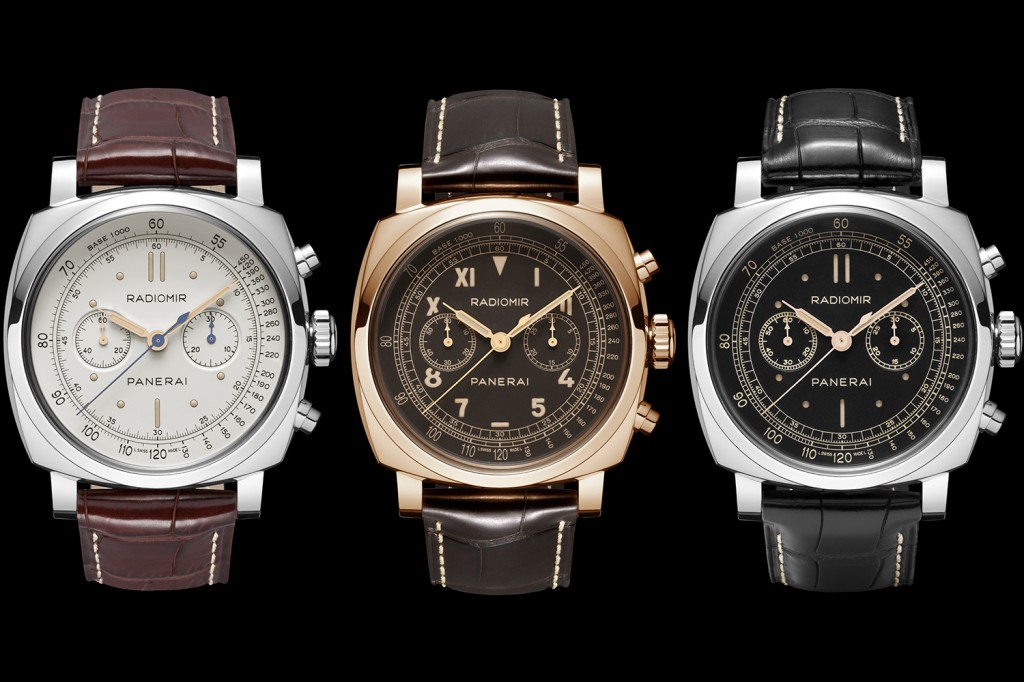 As mentioned before the movement of the new Radiomir 1940 Chronograph is the OP XXV calibre, developed on a Minerva 13-22 base. The Minerva manufacture has had historic links with Panerai since the 1920s, when the Swiss manufacturer was a supplier to the Florentine watchmaker. The OP XXV calibre is a hand-wound chronograph. Its construction is extremely advanced, with high quality details such as the column wheel, the swan-neck regulator, the polishing and chamfering of the individual components, and the Côtes de Genève finish of the bridges. The high level of craftsmanship can be appreciated through the large sapphire crystal porthole in the back, which allows the movement to be admired. 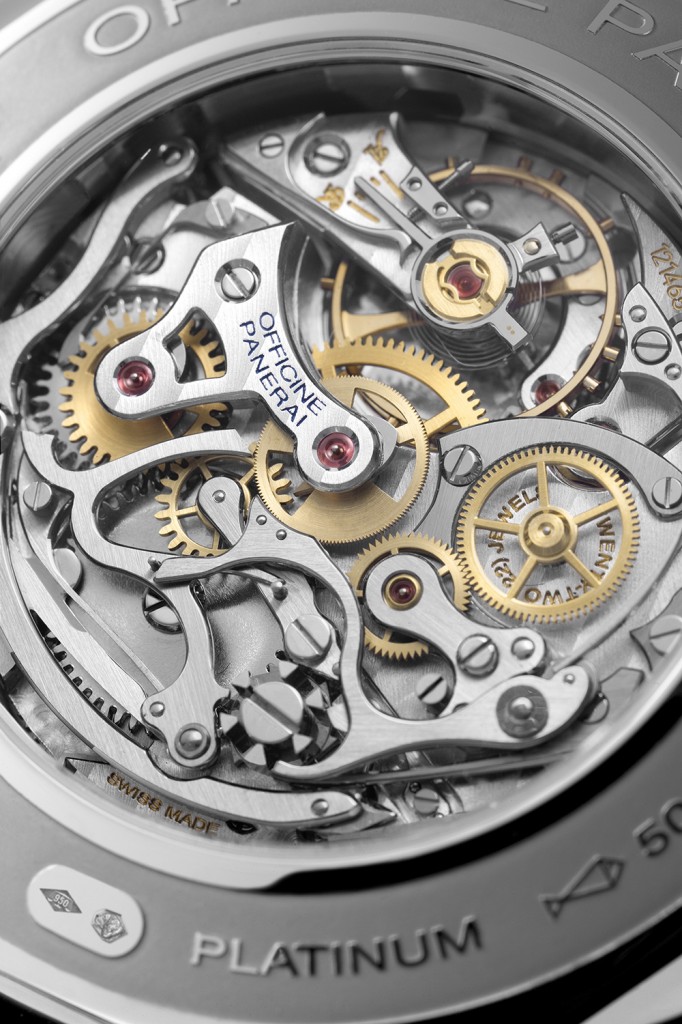 The new Radiomir 1940 Chronograph are produced in a unique edition limited to 100 examples for each of the gold versions and 50 examples for the platinum version. They are supplied with an alligator strap and are water-resistant to a depth of 50 metres.

The Radiomir 194 Chronograph Platinum PAM518 will retail for €59,900. While the Red Gold PAM519 and White Gold PAM520, will retail for €44,900 and €46,900 respectively. Is this latest offering from Panerai great? We think so but we also think the pricing is also very ambitious considering what else was on offer at SIHH 2014 this year….

For more information on the new Radiomir 1940 Chronograph visit the official Panerai website.