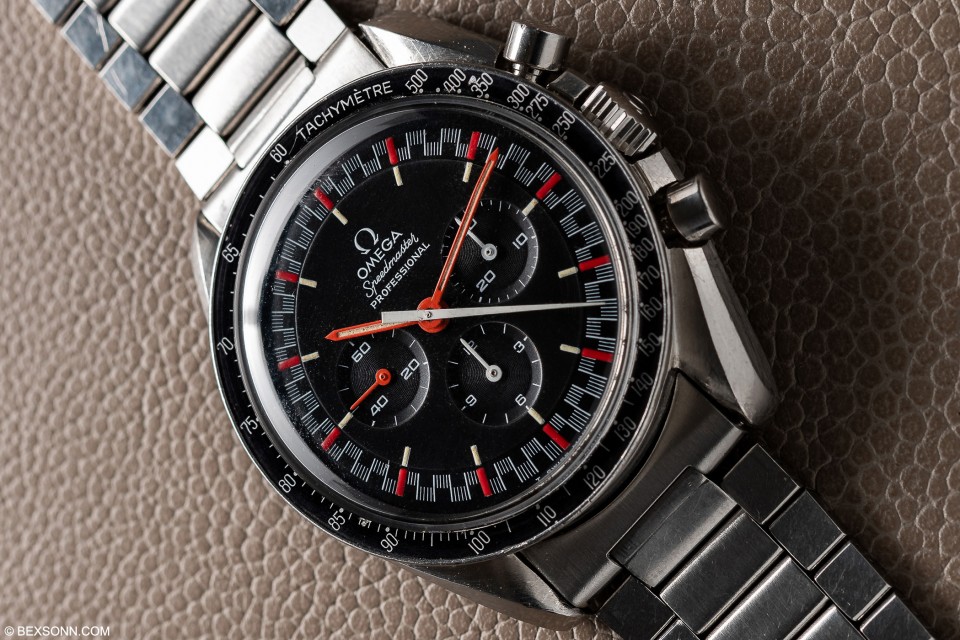 Last week Tuesday, Sotheby’s September London auction took place and we thought it would be good to see how some of the lots we highlighted performed. Sotheby’s London auction wasn’t particularly packed with copious number of timepieces but rather more restraint, exhibiting high-end pieces as well as some really intriguing pieces that are perhaps more attainable. It was also good to see some of the lots we highlighted perform really well on the day and exceed their higher estimates but there were also a couple that didn’t, which we shall get to.

Our first highlight was lot 7: a pre-moon Speedmaster that is considered among collectors to be special, as they were the first to exhibit twisted/bombe lugs. But when such an example features what is known as an exotic dial or in Speedy terms a ‘Racing Dial’ – things start to become a little more interesting. The ‘racing dial’ Omegas are something special, due to the fact there are so few recorded examples. There are three known variants of the ‘racing dial’ Speedmaster. The first is a ‘pre-professional’ model, which of course has an applied Ω logo, red and white markers, red hands, white central chronograph hand and the iconic checkerboard minute scale. The second variant, such as this lot, features all the above mentioned, excluding the applied logo and bears the ‘Professional’ inscription beneath Speedmaster – also, the sub dial registers are somewhat smaller. The third variant features a grey dial with orange accents and logo. Moreover, this example was in excellent condition and came directly from the original owner. And if that wasn’t enough, it had been confirmed by Omega that the watch was indeed delivered to the UK and is one of the only few to have been. The overall impact of all these details? I think the sold value speaks for itself…

Lot 61 was another highlight of ours and as mentioned this was quite a rare piece. You see, very few Submariner references were fitted with these 3-6-9 dials i.e. the 6538, 6200, 5510 and of course the 5513. This Submariner dated back to circa 1964, just a couple of years after this reference was first introduced but of course this isn’t your run-of-the-mill 5513, as it features a trait that makes it highly coveted. This example represented the culmination of the tritium evolution, and as such featured a gilt dial with matching indexes and signature with a silver depth rating. The tritium lume had discoloured to a warm cream hue, with the hands to match. Perhaps one of my favourite aspects of this example was the bezel that had faded to a grey hue and is known in collectors circles as a ‘ghosted bezel’. This piece also came from its first and only owner, and up until the sale was worn every day. However, the question is how much of a difference did this make to the overall sale value – quite a bit, quite a bit indeed…

Lot 64: was a lot we just couldn’t leave out, regardless of its overall condition. We’ve extensively covered plenty of Rolex ‘Paul Newman’ Daytonas over the years, so those in the know, will already be aware about these fine details but what we perhaps found more intriguing is the story behind this watch, that added another dimension. Up until the watch was put up for auction, it was property of successful racing driver Jim Russel, who between 1953 and 1959 won 64 Formula 3 races, in the process winning multiple British F3 Championships and 11 Formula 2 races. Though Jim’s racing career was cut short due to an injury suffered in a crash at the 1959 Le Mans. Nonetheless, this didn’t hold him back and he later founded the well-known Jim Russel Racing Driver School. Over the years, Jim has shared his racing nous with keen racers and future champions such as; Emerson Fittapaldi, Derek Bell, Tiff Needell, Danny Sullivan, Jacques Villeneuve, Jenson Button and Lance Stroll, just to name a few. Due to the success of Jim’s schools, other branches were opened up in Canada and the US. There’s no doubt that during his years schooling drivers, Jim’s Daytona would’ve been crucial in timing his students’ progress – so as mentioned before, I guess you could say that his timepiece has played a small part in motor racing history and this fact was somewhat mirrored in its hammer price.

Lot 121 was another Submariner we highlighted though, as you’ll soon see, not everything came out smelling like roses. Rolex are known for manufacturing large sums of watches but when you consider the 6536 was only produced for one year in 1955 and then consider how many watches they were producing at that time; you are left with a very small number of examples. This example appeared to have lived quite an interesting life and was echoed in its case and dial. The case, yet while well-preserved, showed signs of wear but it was honest. The bezel, which is original, has discoloured to a light grey hue, with the red arrow at 60 having turned pink. However, it is the dial that has seen the most dramatic change over the years and has patinated from a glossy piano black to a deep chocolate brown tone, with the lacquer even having cracked a little – affording an attractive tobacco leaf-like surface. However, this lot was passed and remained unsold – perhaps the aged nature of the lume was somewhat unpleasant for would be buyers?

Last (literally last lot in the auction) but not least was the avant garde 37.5mm ‘disco volante’ reference 3448 perpetual calendar, which is a significant reference in the history of Patek Philippe; it marked the first example of an automatic perpetual calendar made by Patek. This example was a first series that featured a flatter bezel, with the plexiglass giving a more vintage looking appearance and also had a Calatrava cross crown which replaced the PP crown in 1965. The dial and case on this example were in excellent condition and the watch also came with a Patek Philippe extract from the archives, confirming the watch was sold on the 19th February 1973. Though would this be enough to edge it towards its higher estimate? Of course, these early self-winding perpetual calendars are rare and this was echoed in its hammer price.

All-in-all Sotheby’s September London auction was quite successful. Their Bond Street auction room was moderately filled, with quite a lot of action from room bidders – something rather nice to see. Of course, it almost goes without saying that Rolex is the go to watch for most auction houses and collectors. That said, the Rolex Daytona PN6239 which was previously owned by Jim Russel, perhaps didn’t perform as well as expected, this was perhaps due in part to the condition of the lume. Nonetheless, Sotheby’s London auction still performed admirably considering there were only 139 lots up for auction with only a handful of lots passed, giving Sotheby’s a sales percentage of 95% – totalling £2,566.065.

For more results information from the Sotheby’s London Important Watches Auction that took place on the 24th September 2019 at their London HQ, visit the official Sotheby’s website to view the entire catalogue.