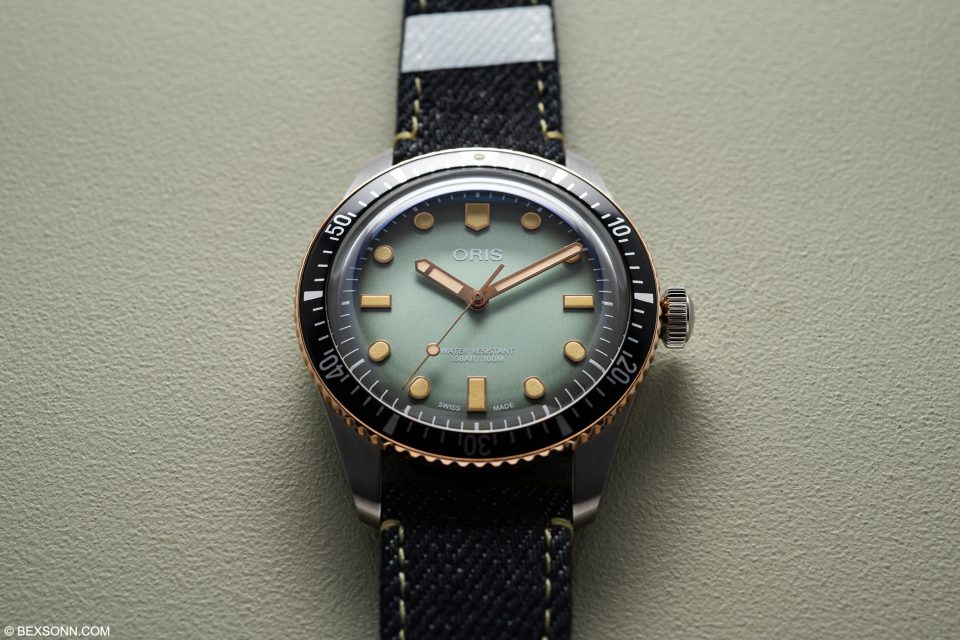 A few years ago, Oris released arguably one of the most talked about dive watches: the Divers Sixty-Five. At the time dive watches from larger brands released during the same time were always going to get a lot of coverage but a few things in particular about the Oris Divers Sixty-Five struck a chord with many, myself included. Since then, Oris have been releasing new iterations of their Divers Sixty-Five watch and now Oris have produced a special collaborative edition.

The new Oris x Monotaro Divers Sixty-Five is a special edition watch produced in collaboration with Momotaro Jeans, the spirited Japanese company whose high- quality jeans are worn by style-savvy people in the Far East and around the world. The anti-corrosive bronze and stainless-steel case measures a rather moderate 40mm in diameter. The case itself sports a very sleek and minimalistic design, so while it may seem large when looking at the numbers, on the wrist it wears like a charm and looks downright cool too. The design of the case is rather interesting, the curved mid-section is what makes it appear so sleek, with a bronze bezel that sits just atop, which also doesn’t add much in the way of thickness. But being a dive watch it features quite a sizeable, Oris signed, screw-down crown.

The black aluminium unidirectional bezel features a silver 60-minute, demarcated, diving-scale, with a large triangle at 12 o’clock – which even features a luminous pearl (no faux here). Another added touch that really makes this piece standout is the domed sapphire crystal. Beneath the domed sapphire crystal is the beautiful khaki green gradiant dial, which hue grows darker towards the dial flange. The hue of the dial is nicely accented by the use of bronze toned indices and hands, matching the bronze bezel. The hands and dial are filled with what Oris have called “Light Old Radium” Super-Luminova, which is inclusive of a bit of faux-patina.

Of course, the special feature of this new Oris collaborative timepiece is the strap. Momotaro are well-known for their jeans, which was founded by Mr Hisao Manabe in 2006. Named after a Japanese folklore hero, Momotaro. Mr Manabe’s vision was clear from the outset; no compromise on quality. His denim would use only the finest long-staple cotton, and only deep indigo rope dye to achieve the best possible fade. His workshops would use vintage shuttle looms to create a hand- made feel to the weave, and every detail would be hand-sewn. Mr Manabe wanted to set a new international denim standard. And it is this very same denim which is used to for the strap of this special edition Monotaro Divers Sixty-Five. Made from indigo Momotaro denim, the strap features two white ‘battle stripes’, the denim manufacturer’s famous signature.

The Oris Divers Sixty-Five is water-resistant to 10bar/100m and has a screw-in stainless steel crown. Inside is the automatic Oris Calibre 733, which is based on the Sellita SW200-1 that powers hour, minute and central second hands and a date function at 6 o’clock. The steel case back is engraved with the name of the watch brand and Momotaro.

Now, I’m no denim connoisseur but this collaboration between Oris and Momotaro is quite an inspired one. The choice of dial colour nicely accents the denim strap though I can’t decide whether I would’ve preferred a more washed out denim look or not. That said, it would be interesting to see how the straps fades in the future. Either way, it’s a distinctive look that I think will interest a lot of collectors.

The new Orix x Momotaro Divers Sixty-Five comes with a Denim travel pouch and is priced at £1,700. For more information on this new collaborative special edition, visit oris.ch.