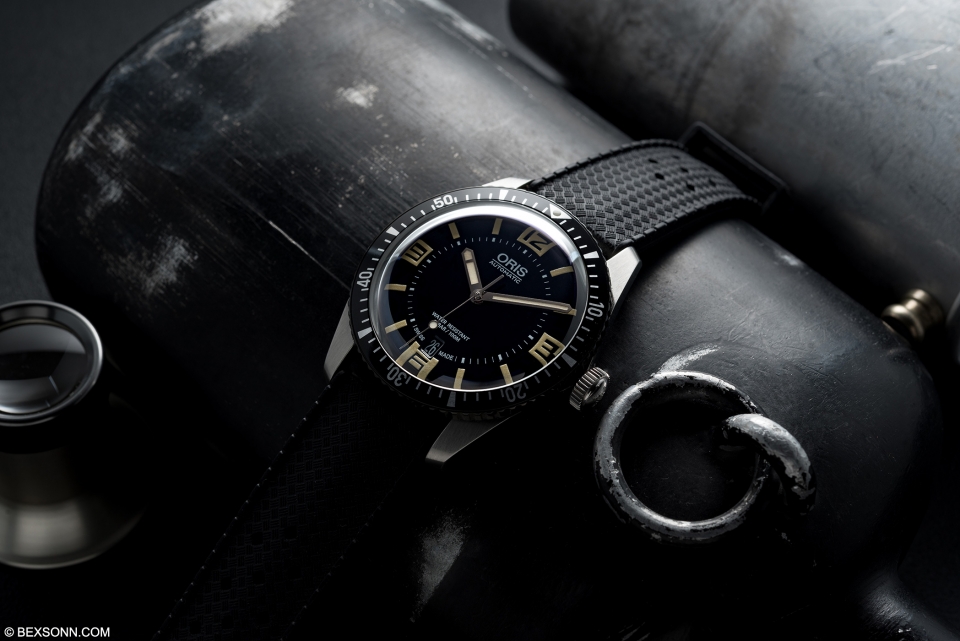 A couple of years ago, Oris released arguably one of the most talked about dive watches at that time. Of course, dive watches from larger brands released during the same time were always going to get a lot of coverage but a few things in particular about the Oris Divers Sixty-Five struck a chord with many, myself included. The Oris Divers Sixty-Five isn’t a new watch per se but it is one I’ve been wanting to get my hands on for some time and now that I have, I thought it would only be right that I shared my thoughts, oh and of course some images. 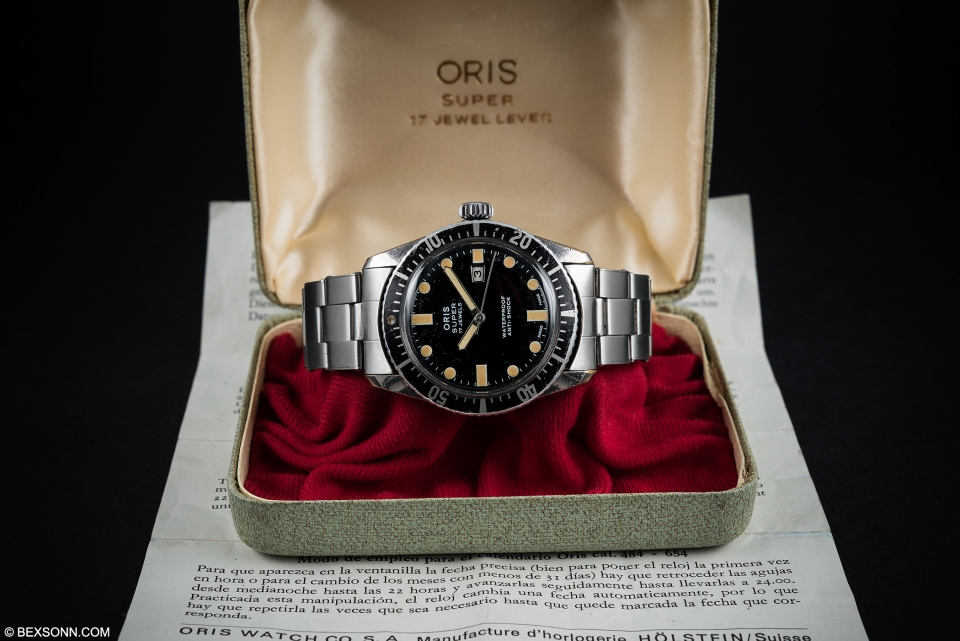 At this year’s Baselworld there was an emerging theme on retro/vintage-inspired watches, however, this Oris Divers Sixty-Five released back in 2015 was already ahead of that curve. You see, the Divers 65, was inspired by a divers watch Oris release back in 1965. As we all know, divers have long relied on accurate and sturdy wristwatches for keeping track of dive time and measuring decompression stops. Oris’s 1965 diver’s watch featured a chromium-plated brass case with a plexi-crystal, a bi-directional rotating bezel, and a versatile black plastic ‘tropic design’ strap. Most importantly, it was water-resistant to 10 bar/100m, which may not sound like much back in 1965 but this was considered quite some depth. 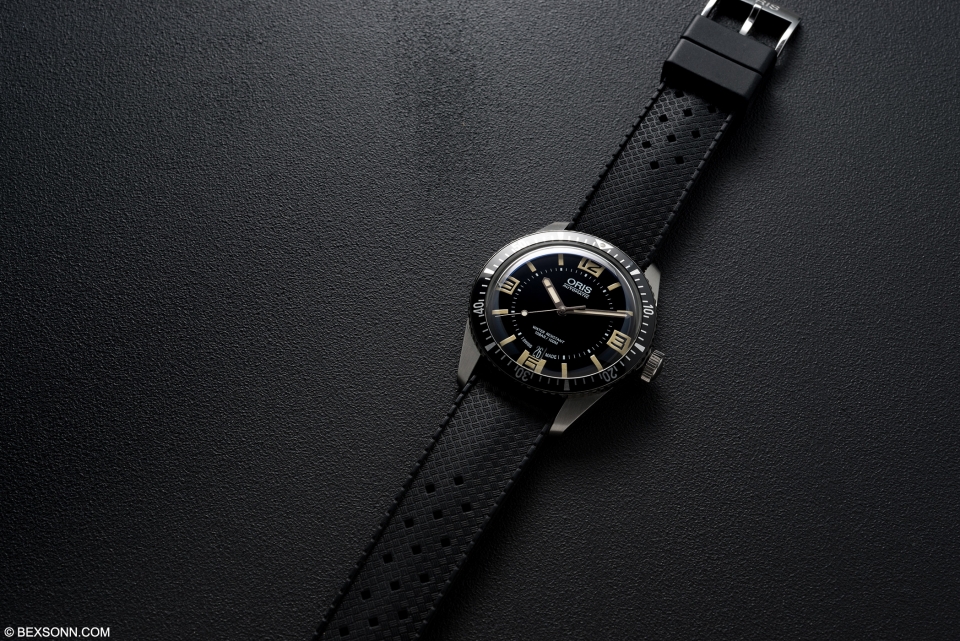 The new Oris Divers Sixty-Five is a faithful reissue of the original diving watch released back in 1965 but of course with contemporary touches, bringing it into the 21st century. The anti-corrosive all stainless-steel case measures a rather moderate 40mm in diameter. The case itself sports a very sleek and minimalistic design, so while it may seem large when looking at the numbers, on the wrist it wears like a charm and looks downright cool too. The design of the case is rather interesting, the curved mid-section is what makes it appear so sleek, with a bezel that sits just atop, which also doesn’t add much in the way of thickness. But being a dive watch it features quite a sizeable, Oris signed, screw-down crown. 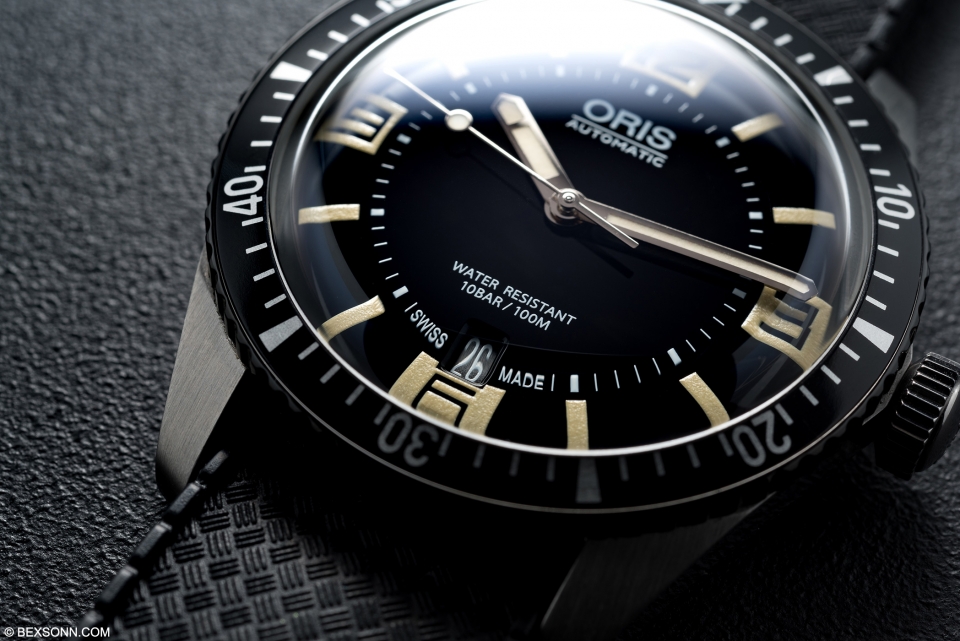 The use of a black bezel is reminiscent of dive watches of yesteryear, when watch manufacturers would use black Bakelite bezel for their dive watches – such as the Longines Skin-Diver. The black aluminium unidirectional bezel features an engine-turn finish, with silver 60-minute, demarcated, diving-scale, with a large triangle at 12 o’clock – which even features a luminous pearl (no faux here). Another added touch that really makes this piece standout is the sapphire crystal. 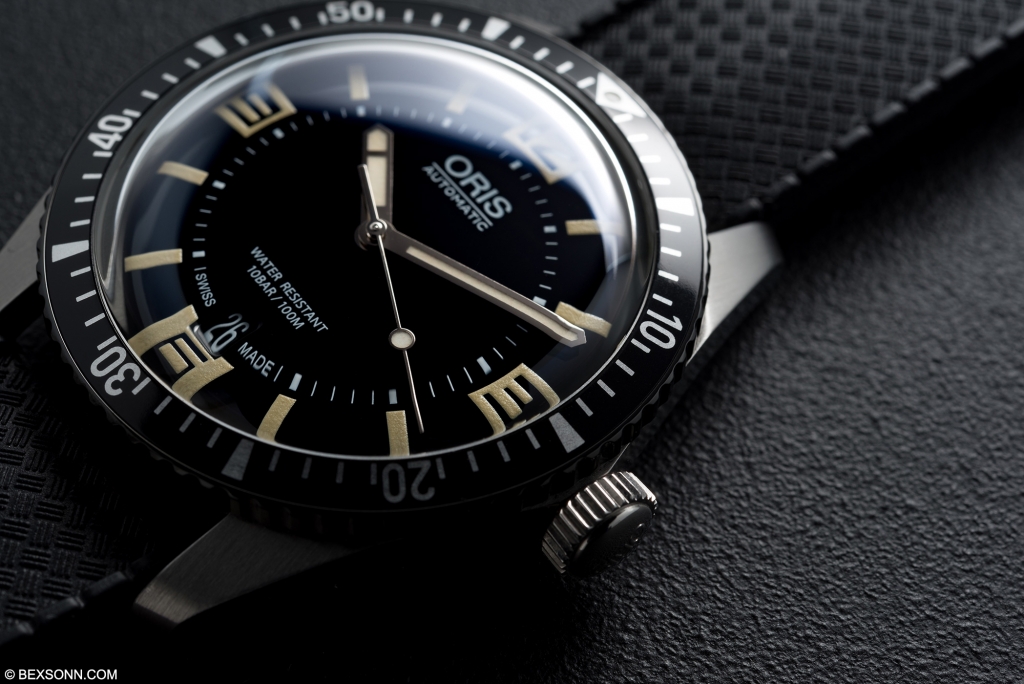 In modern times, we’ve seen the use of sapphire crystal on pretty much every new watch that comes out and this piece is no different. Oris could’ve easily gone down the route of making things easier for themselves and used a flat, characterless, sapphire crystal but no. It sports a vintage-inspired bubble-curved glass which is made of scratch – resistant sapphire crystal and comes with anti-reflective coating on the inside to reduce glare and increase legibility underwater. Something much, harder to produce but the effects give it more character.

When the Divers 65 was first introduced, the only option that was available at the time was a vintage-inspired black rubber tropic strap, with a Oris pin-buckle, one I opted for too. However, Oris introduced a vintage-inspired bracelet as an added option, a steel faux riveted oyster-like bracelet, which does add a bit more charm and a little more heft. 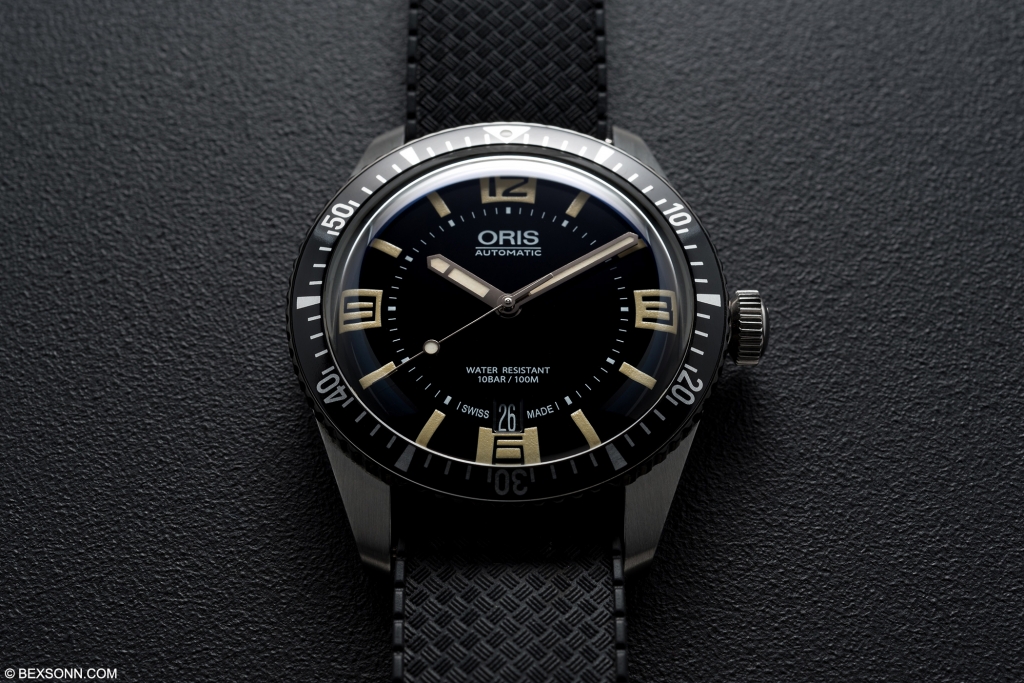 The dial is an all-black glossy affair, with some delightful and rather playful details. The original 1965 Oris diver had tritium filled hands and indices, and Oris have tried to stay as faithful as possible to the same design and look but with more modern materials. The dial features reverse stencil-like Arabic numerals at 3, 6, 9, & 12 o’clock, with block markers filling in the rest.  Unusually, the minute markers have been placed towards the centre of the dial, which definitely adds more legibility. The original Diver from 1965 also featured a date aperture but it was more predominantly placed at 3 o’clock but today’s model is much less intrusive, with the aperture placed at 6 – affording a much cleaner appearance in my humble opinion. The hands and dial are filled with what Oris have called “Light Old Radium” Super-Luminova, which is inclusive of a bit of faux-patina. 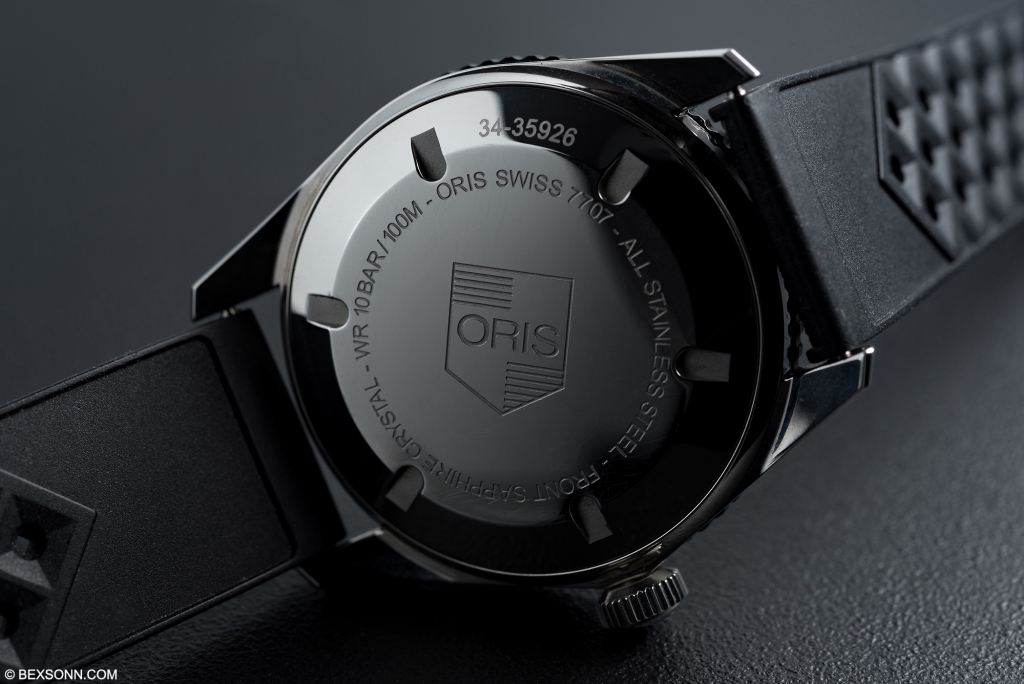 As mentioned before, the Oris Divers Sixty-Five is water-resistant to 10bar/100m and has a screw-in stainless steel crown. Inside is the automatic Oris Calibre 733, which is based on the Sellita SW200-1 that powers hour, minute and central second hands and a date function at 6 o’clock. The steel case back is engraved with the same historical Oris emblem as the 196.

As mentioned before, when the Oris Divers Sixty-Five was first released back in 2015, I managed to get my hands on it for a moment but not long enough for an in-depth review. The Divers 65 from Oris is an absolutely stunning watch, it is very reminiscent of early dive watches that were rather slim. The 40mm case, in my humble opinion, is perfect and though many may have perhaps bemoaned the small case size when it was first released, the fact that Rolex have been using the same case size for many years does make that argument seem a little juvenile. While I understand the cases profile does make it feel a little smaller, this design really does capture the lighter look of earlier dive watches but of course the downside to this is its depth rating of 100m. But then ask yourself; when are you genuinely likely to have a Jacques Cousteau moment and take a dive below 100m? 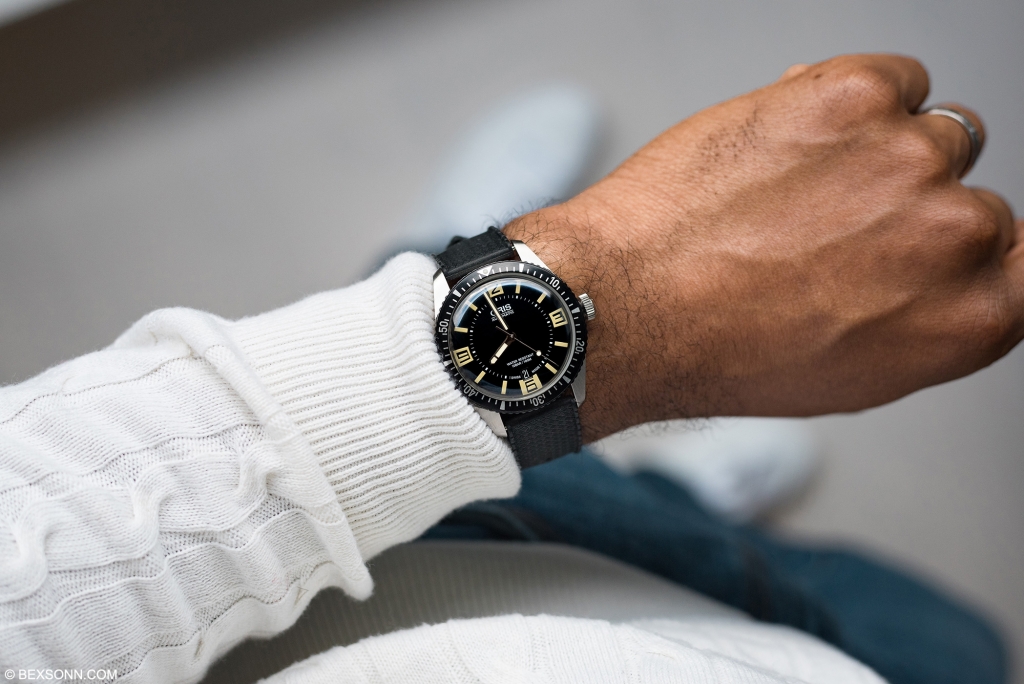 All-in-all I think the Divers Sixty-Five was a masterstroke from Oris and not just because it was so well executed but also because they made it affordable too (£1,270). It is rugged yet charming and comfortable to wear, and though at first, I thought the strap was a bit too long – I was reminded it is a dive watch, so you are likely to have a dive suit on at some point. That said, there aren’t many new mechanical dive watches that you can purchase out there for this price and the fact it ticks so many boxes, makes it an absolute bargain in my opinion.

For more information on the Divers Sixty-Five and to see the available dial and bracelet options, visit the Oris website. 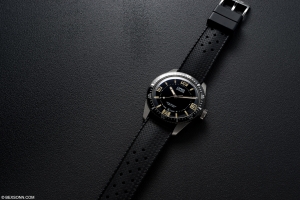 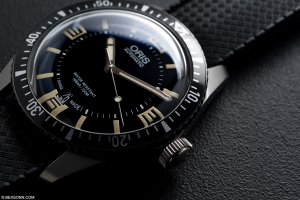 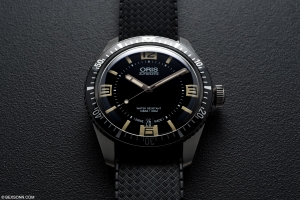 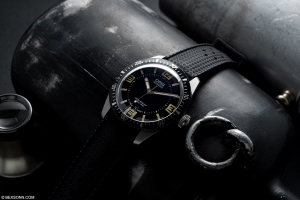 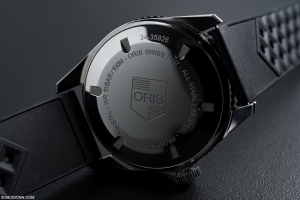 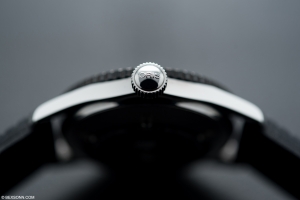 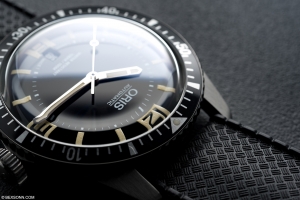 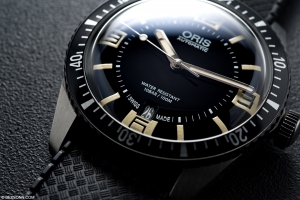 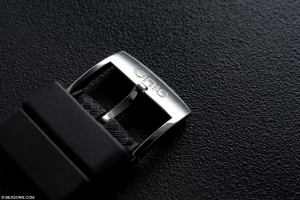 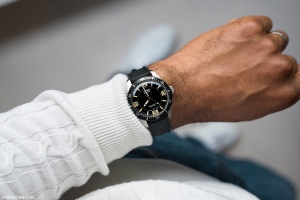