The New Omega Speedmaster Dark Side of the Moon Apollo 8 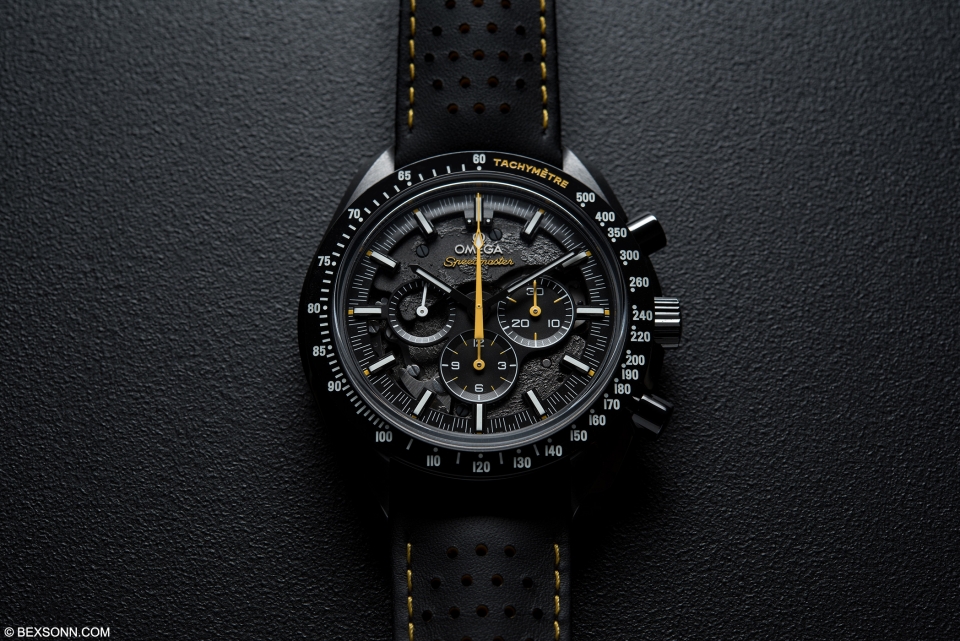 Over the past few years Omega have introduced quite a few different variations of their ceramic Speedmaster timepieces. Since 2013, Omega have introduced at least one ceramic timepiece each year and this Baselworld was no different. While Omega may have over indulged us over the past years, I think it is safe to say this year’s introduction has grabbed the headlines for all the right reasons. Admittedly, when we first heard and saw pictures of this new DSotM edition, we weren’t overly excited, which says something with us being fans of the Speedmaster. However, when we saw this piece in the metal it all became apparent at just how cool this new addition to the DSotM collection was.

Omega didn’t make too much of a huge fuss about this new Dark Side of the Moon as they’ve done in previous years but when you look closely you’ll notice there are quite big differences between this model and all other previous iterations. Like its predecessors, the DSotM Apollo 8 is practically the same in every shape and form. It uses the same 44.25mm case dimensions – which may sound rather large but, in all honesty, fits really well on the wrist and doesn’t really have a sense of heftiness to it, this is mainly due to the materials used and curvature of the lugs. 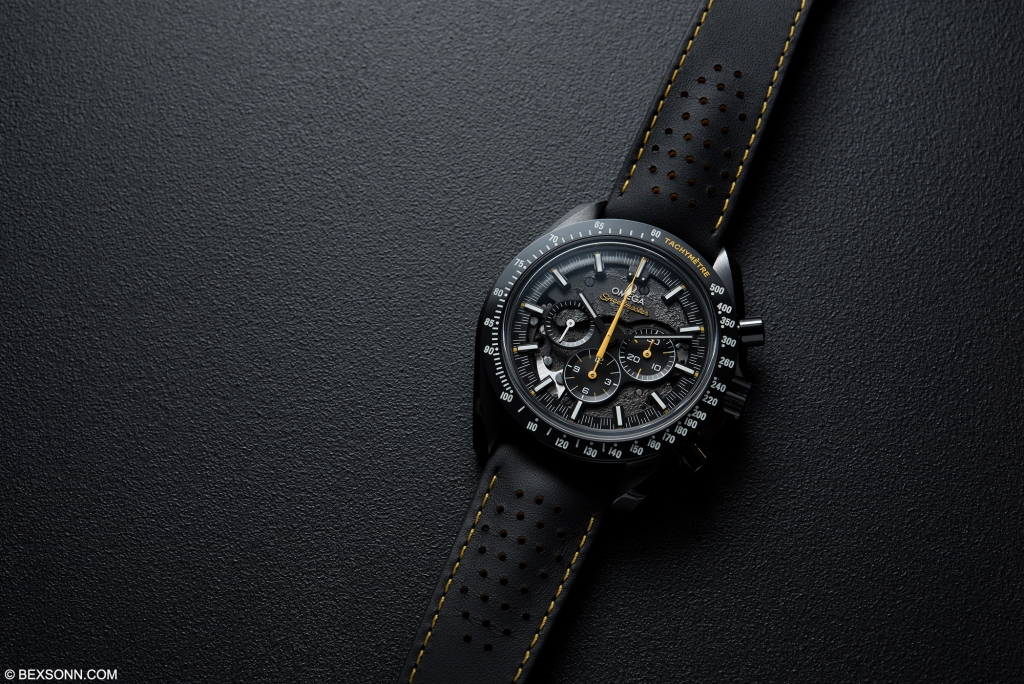 Why Apollo 8? 50 years after the Apollo 8 mission, the first to orbit around the moon, Omega is releasing its newest Dark Side of the Moon to celebrate the 50th anniversary of this mission. Unlike previous Dark Side models, this release houses a specially decorated version of the revered Moonwatch movement and the treat that it has undergone deserves to be seen.

As mentioned in previous years, the Dark, Grey and White Side of the Moon start out life as one solid block of white ceramic but then go through a plasma technology treatment, which gives the case its colour (in this case black). The plasma treatment isn’t just superficial but in fact penetrates the ceramic, so even if you were to slice it in half that same (black) colour is present. 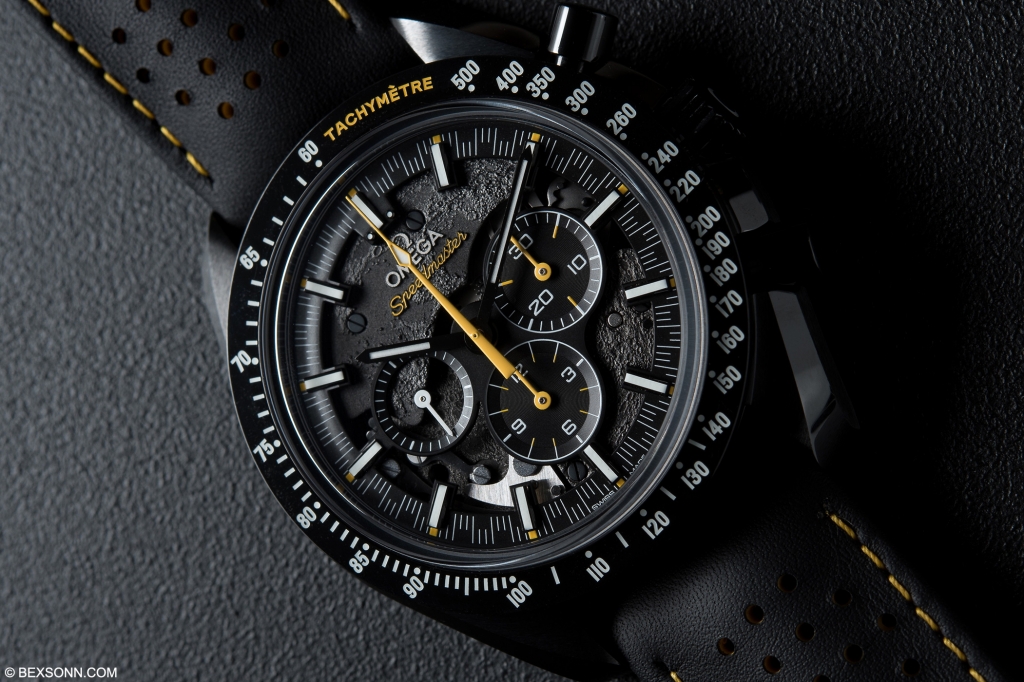 Obviously, the most eye-catching detail of this new DSotM is its open dial and the combination of yellow accents. This is the first time that Omega have offered a DSotM piece with an open dial. The main feature of this Speedmaster is the incredible skeletisation, which incorporates the more commonly seen 3 register layouts, as opposed to two register layouts adopted by the Ceramic models that came before this. The outer minute track is also reminiscent of those from the Racing model, all of which seemingly hover above the treated 1869 calibre – which looks even more stunning in the metal. 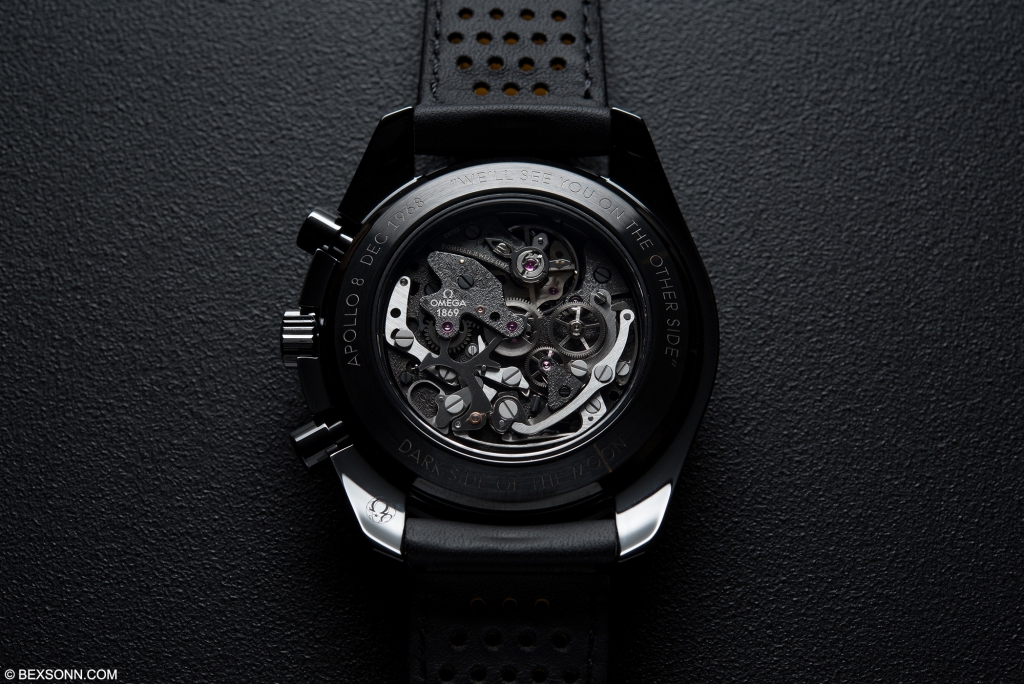 The 1869 movement has been made to look this via way of laser ablation, which has been used to precisely decorate the bridges and main plate of the blackened movement, producing realistic imagery of the lunar surface. And like the moon, it reveals two unique sides. The dial-side is a light shade to represent our view of the moon’s surface from Earth, while the back of the watch delves into the dark side that only astronauts get to see.

To balance out the dark tone of this Speedmaster, the Omega chose yellow colour coding. Omega first used colour coding in its Speedmaster collection in 1968 for a Speedmaster Racing model. Today, because yellow is often most closely associated with racing and speed, it was seen as the ideal choice for this new watch. 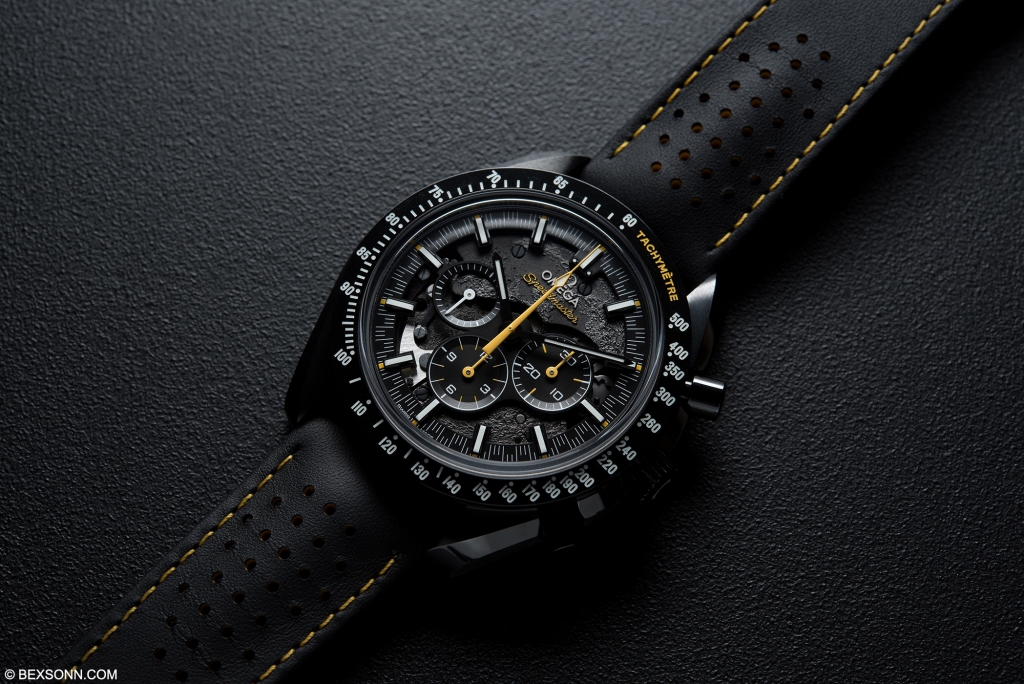 The chronograph hands are varnished yellow, while the watch’s tachymeter scale and crown are filled with Super-LumiNova. The black and yellow theme extends to the leather strap, which contains a section of yellow rubber through the middle. A milling tool has then been used to create micro perforations through the constructed strap to reveal the yellow rubber inside. On the caseback, the words “WE’LL SEE YOU ON THE OTHER SIDE” – these are the words that were spoken by Command Module Pilot Jim Lovell on board the Apollo 8 mission at the start of the crew’s pioneering orbit to the dark side of the moon.

The new Speedmaster Dark Side of the Moon Apollo 8 will retail for £7,200. For more information on this new piece, visit the official Omega website.