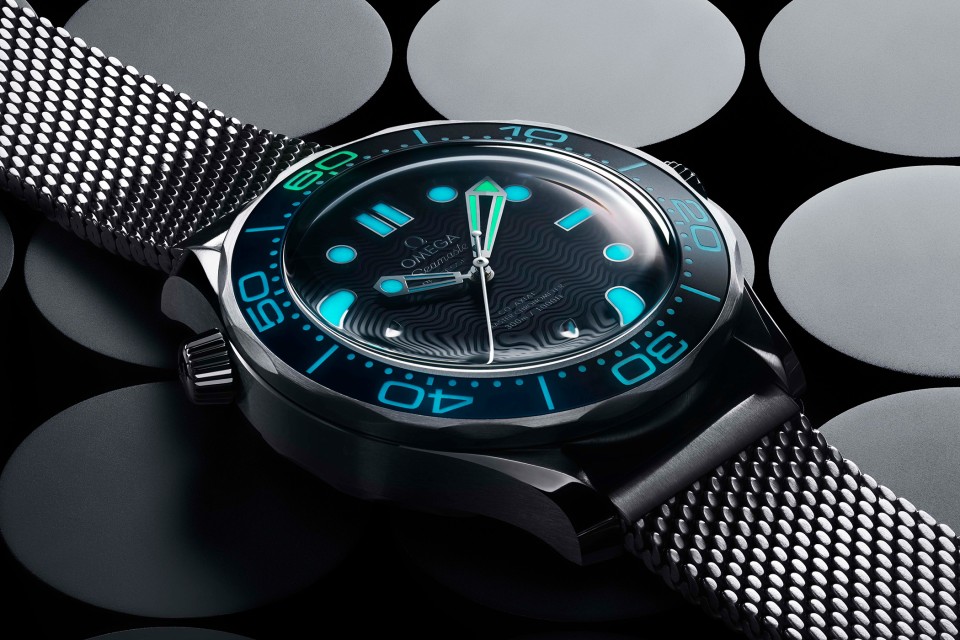 Over the last few years Omega have spoilt us with some gems from yesteryear and they have continued this trend. That said, perhaps one piece we didn’t quite expect was this new 007 Seamaster Diver 300, a watch that became synonymous with secret British MI6 007 agent, James Bond. I fondly remember first seeing the Diver 300 on the wrist of the then James Bond actor, Pierce Brosnan, in Golden Eye. When friend turned foe, actor Sean Bean, who plays Alec Trevelyan asks for his watch and notices the fact James’ watch is the newer version to his in the closing scenes.

On 5th October 1962, one of cinema’s most iconic characters made his on-screen debut. Since that first instalment, the James Bond franchise has spanned an incredible 60 years. Based on the novels by Ian Fleming, the 25 action-packed films made during these years have laid the foundation for a global cinematic legacy. 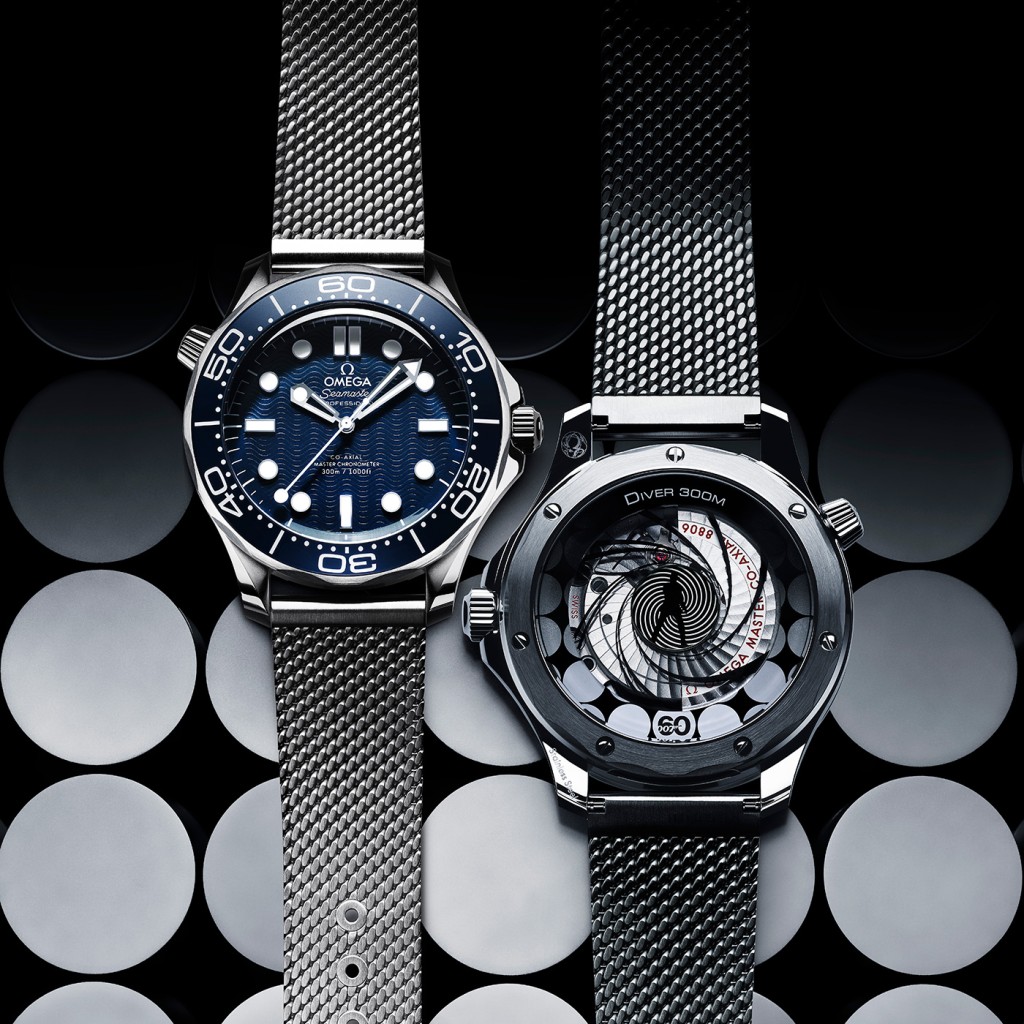 Of course, everyone has a preferred James Bond, but everyone will remember seeing Pierce Brosnan donning the Seamaster Diver 300M and following him, it was Daniel Craig who took the role of 007 for five memorable films. The actor has been an Omega ambassador throughout his time in the role and has become an avid fan of the brand’s watches. Alongside him, Naomie Harris as Moneypenny (Skyfall, Spectre and No Time To Die) also joined the Omega family, delivering both elegance and female empowerment on and off screen.

Since 1993, the Seamaster Professional Diver 300M has enjoyed quite the following, perhaps even more so than the revered Speedmaster. Loved for its design and ocean technology, the original timepiece signalled Omega’s triumphant return to the world of diving watches and ignited the brand’s long-standing partnership with James Bond. To celebrate this 60th Anniversary of James Bond films – Omega have unveiled a new Seamaster Diver 300M to celebrate this occasion. 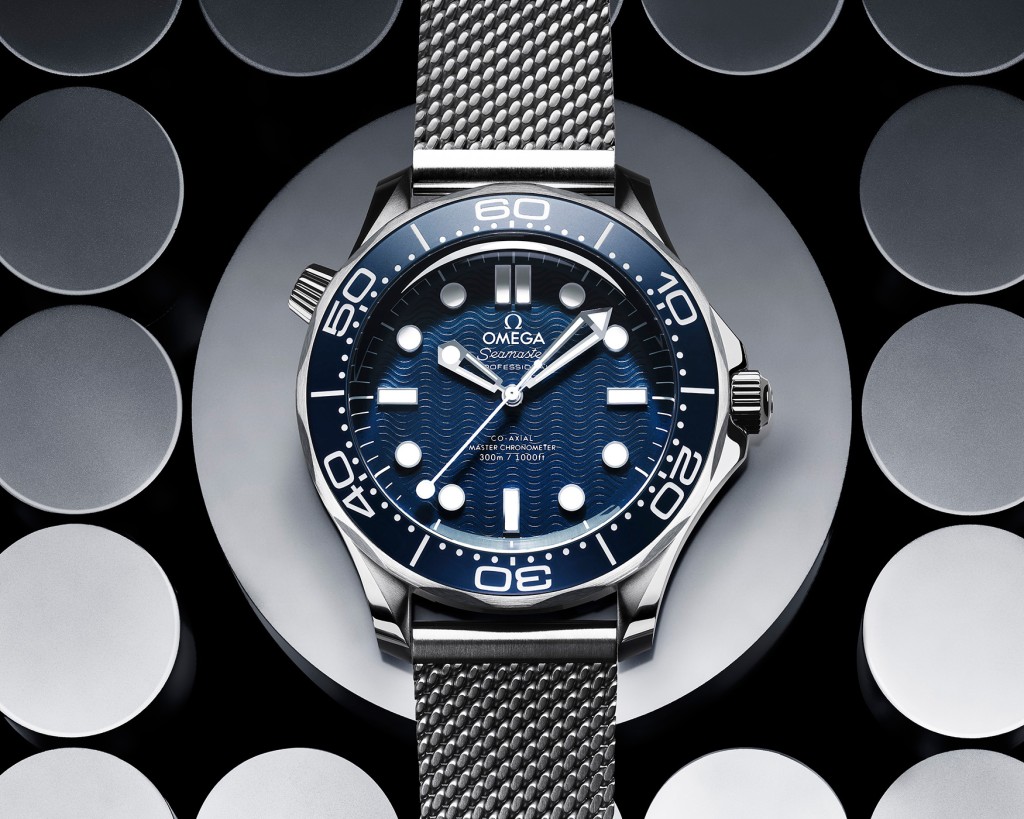 This new Seamaster Diver 300M 007 Edition features a 42 mm case that has been entirely crafted from stainless steel, which has also been used for the Milanese bracelet. Turning the piece over will reveal its film-themed caseback, which replicates the famous 007 opening sequence – with Bond in silhouette and a spinning gun barrel design. This dynamic scene plays out beneath the sapphire, decorated with micro-structured metallisation. The patent pending “moiré” effect animation is linked to the running of the lollipop central seconds hand, so the action never stops. 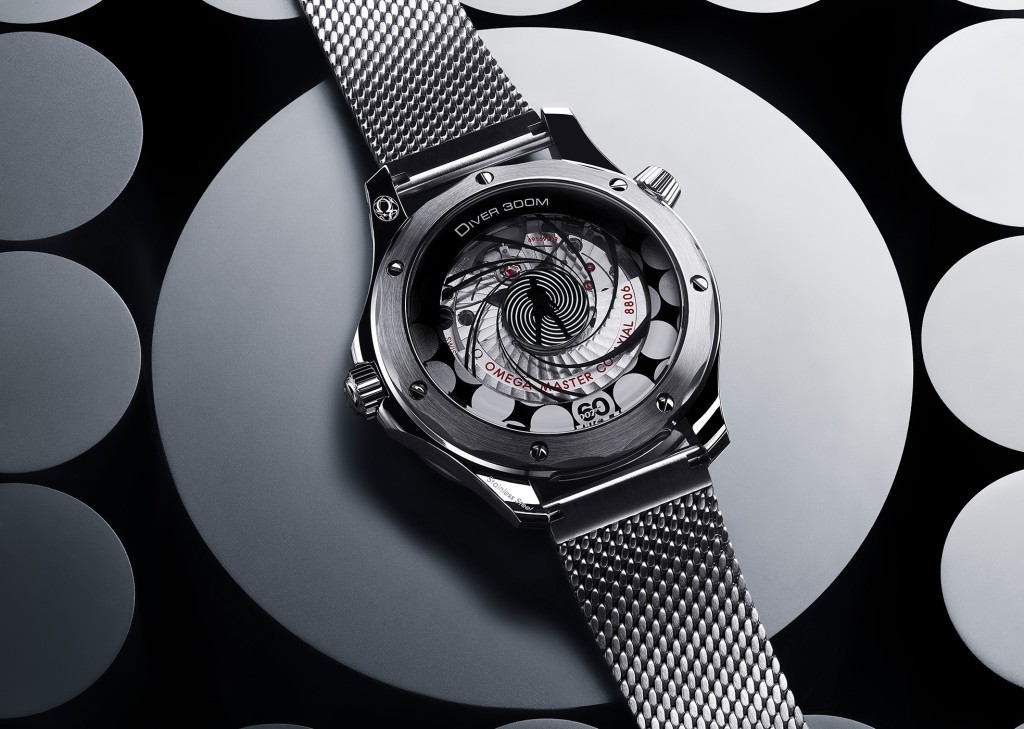 The iconic diving bezel and dial are both made from blue oxalic anodized aluminium, with the dial featuring laser-engraved waves, and the bezel featuring a diving scale filled with white Super-LumiNova. Also spot the commemorative “60” which replaces the diving scale’s traditional inverted triangle, and luminescent green dot which links to the minute hand. This steel piece is driven by the Co-Axial Master Chronometer calibre 8806. 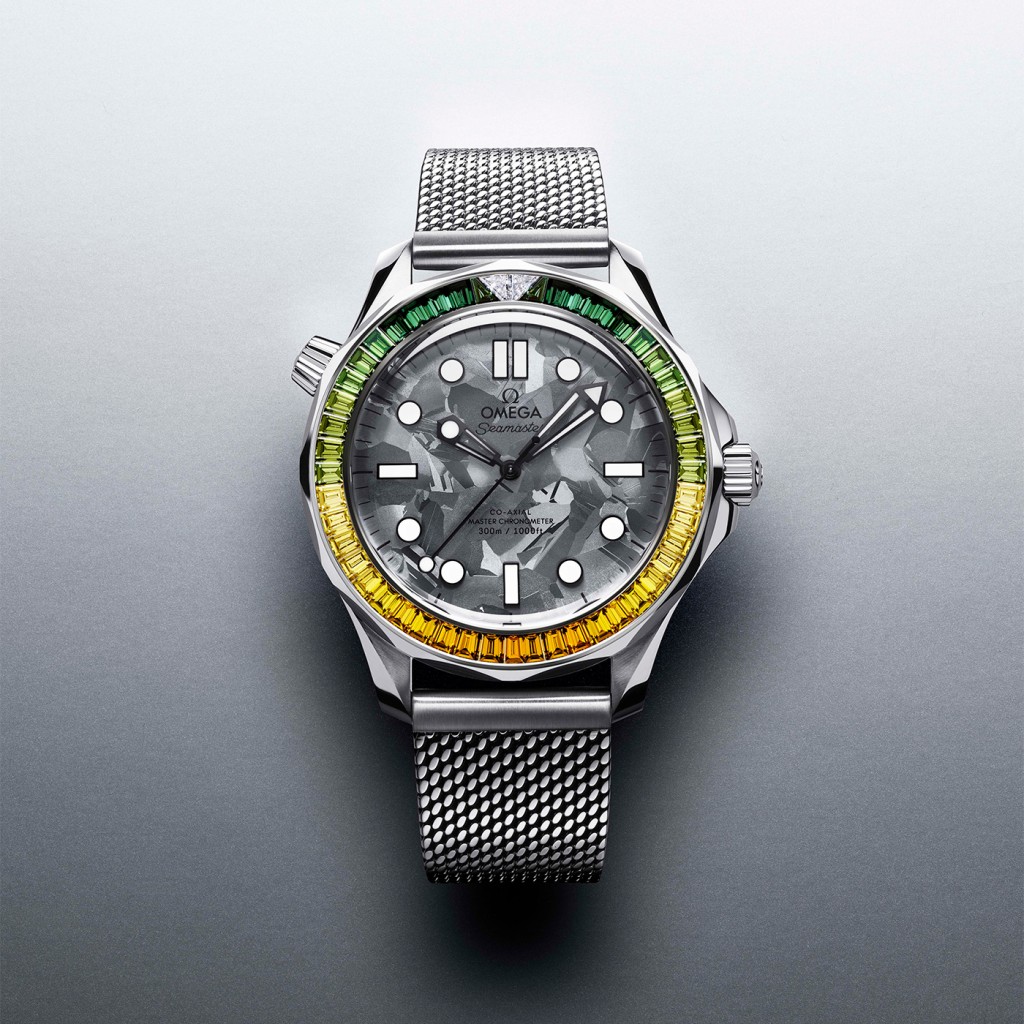 And for those of you who prefer a bit of the fancy, fancy – alongside this new 60th anniversary timepiece Omega have also introduced a precious metal 007 James Bond Seamaster 300M. Omega have used their exclusive white gold alloy (18-carat Canopus Gold) to craft this special 42mm watch. In a nod to Ian Fleming’s home on the Island of Jamaica, Golden Eye, the dial has been made from natural grey silicon. Thanks to the crystallites, the pattern on each one is totally unique, guaranteeing the wearer that no two dials are ever alike. 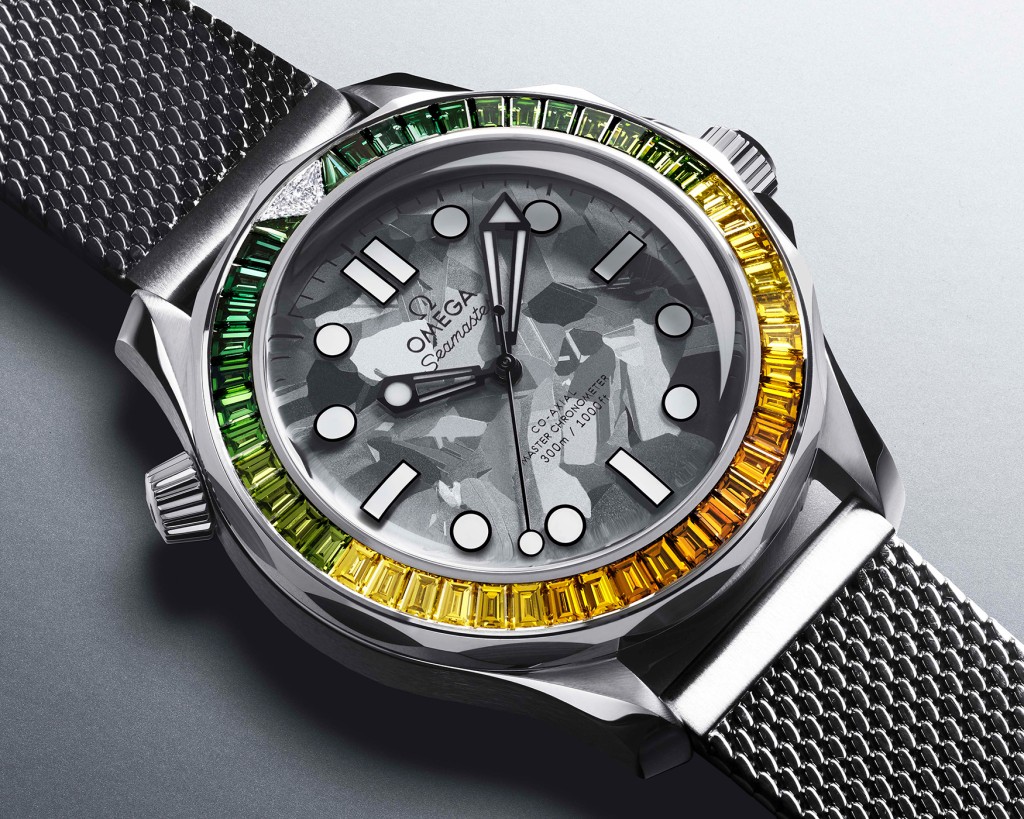 Furthermore, in tribute to the Jamaican flag, the bezel is circled with a paving of green and yellow treated natural diamonds in 10 different tropical shades, which range from extra dark forest green to cognac, passing through olive, yellow, gold and gold/ cognac. Two additional clear diamonds at 12 o’clock add some vibrant sparkle to the look and refer to the 60th anniversary. Like the steel model, this example also comes on a Milanese style bracelet, fashioned out of 18-carat Canopus gold. This precious metal piece is driven by the luxury Co-Axial Master Chronometer calibre 8807.