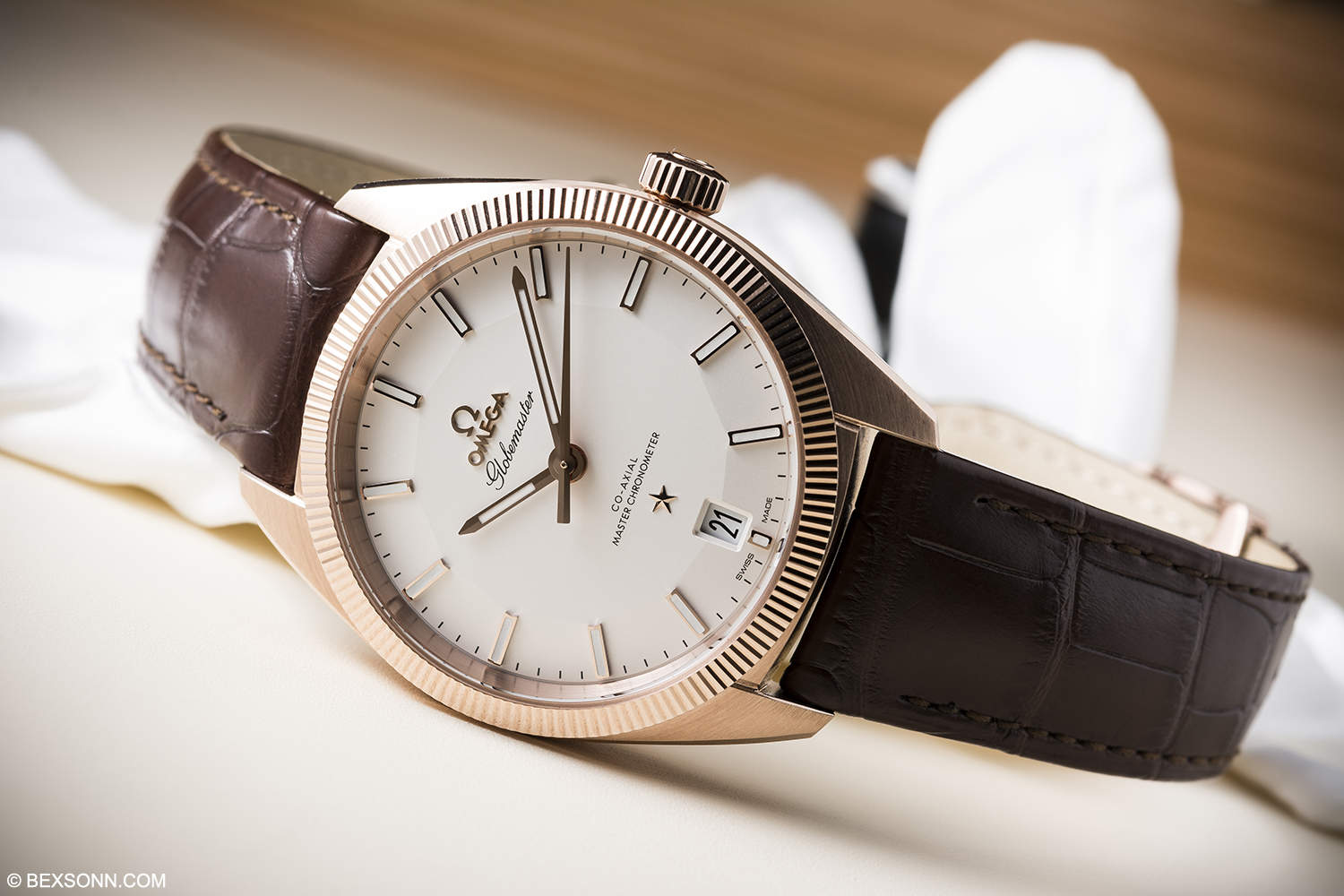 Omega Globemaster: Omega introduced quite a few impressive timepieces this year at Baselworld but not many of us would have seen this new timepiece coming: the Globemaster, which takes design cues from the Constellation range. I am a massive fan of the Omega Constellation from the 50s and 60s and the Globemaster has a perfect balance of historical elements in a contemporary package and to add to that the Globemaster is the first timepiece from Omega to feature a METAS certified movement.

First, lets look at this new METAS certification. In December of 2014, OMEGA held a press conference together with the Swiss Federal Institute of Metrology (METAS) to announce a new watch certification process that will become active in 2015. The Globemaster is the first watch to be tested and approved according to this new process, which, in addition to measuring the performance of the watch in daily wearing conditions, ensures that it functions properly when exposed to strong magnetic fields of 15,000 gauss. Any watch brand can submit its watches for these METAS-approved tests in order to receive Master Chronometer standing, a label that at once makes a statement about the quality of not only the mechanical movement but also of the watch itself.

Before the watch is exposed to the magnetic field and its performance is measured according to the criteria approved by METAS, the movement must pass the tests established by the Contrôle Officiel Suisse des Chronomètres (COSC). Along with their watch, customers will receive a certification card that includes an identification number that they can use to see how their watches performed on each test. This documentation is proof that the watch has been certified by METAS. 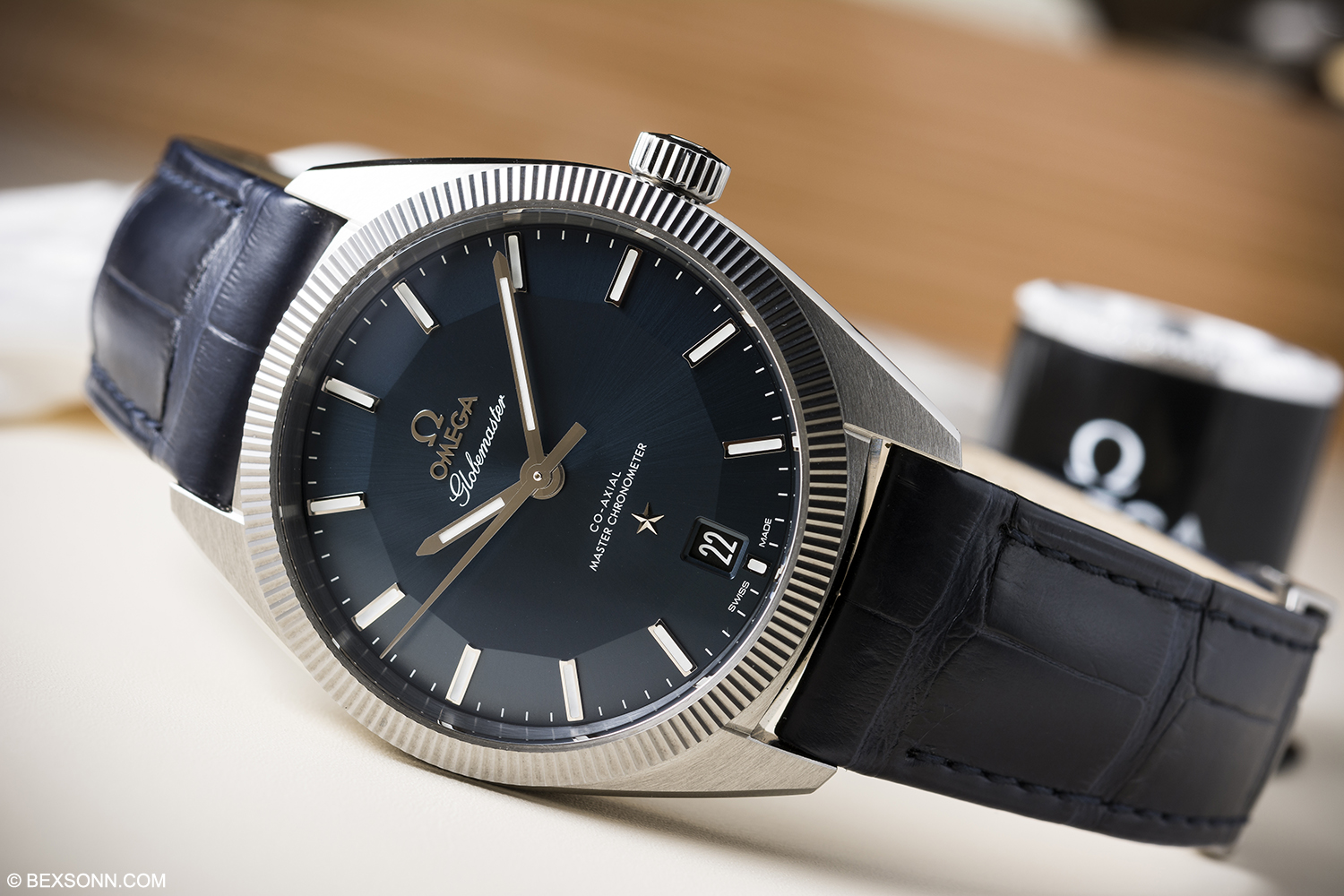 As mentioned, the first thing you’ll notice about the new Globemaster are two design features that define its character: its dial, which is created in a style that collectors refer to as a pie-pan dial, and the “fluted” bezel, which may seem like an unusual design element for Omega but it has adorned several famous Constellation watches from the late 60s. The perfectly sized 39mm case is available in a range of materials including 18K Sedna™ gold, 18K yellow gold, stainless steel and platinum, which is limited. The dial of each variation will either feature a matte deep-blue dial or a silvery opaline dial, however the platinum version makes use of a platinum dial. Like the revered Constellation, the indexes are applied to the dial and fashioned from 18K Sedna™ gold or 18K yellow gold, or are rhodium-plated or blackened depending on the case material and dial colour, with the exception of the platinum dial, which features blue indexes. The central hour, minute and seconds hands match the indexes, all of which are coated in Super-LumiNova – as are the hour and minutes hands. There is also a date indication at 6 o’clock on the dial. 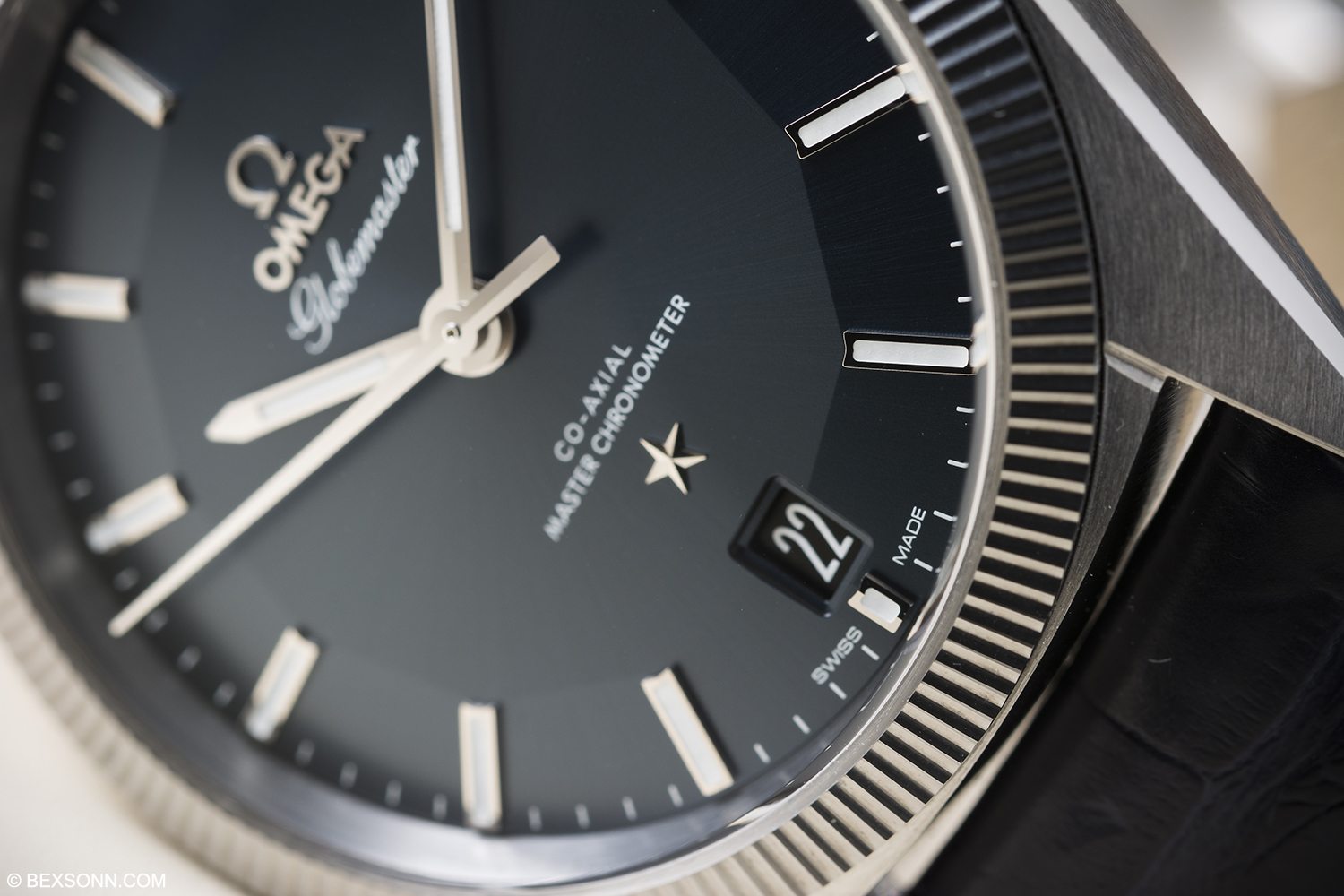 The case is brushed, which is a nice touch and downplays the Globemasters more dress watch appearance. The lugs feature two polished bevels, which ties the finish of the bezel to the case. These polished bevels are also found on the three-row metallic bracelet which is completely brushed except for its understated polished edges. The central links are slightly curved, enhancing the watch’s sophisticated appearance. 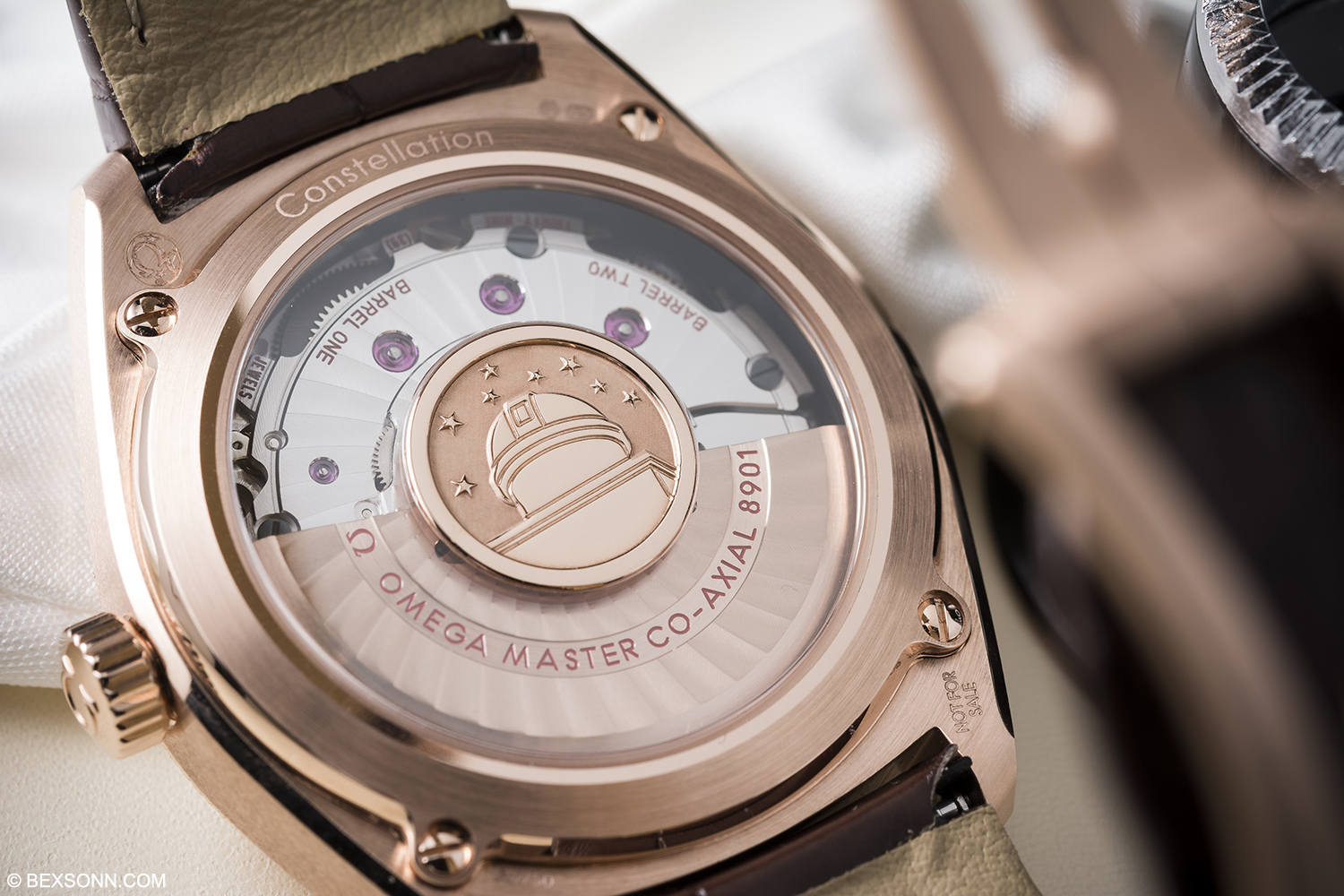 Turning the timepiece over and peering through domed scratch-resistant sapphire crystal, you see the in-house Co-Axial Master Chronometer calibre 8900/8901. On the case back you’ll also see a decorative medallion made of the same material as the case, which has been set into the glass before the glass is fastened to the case back with four screws. The medallion is stamped with an image of an observatory surrounded by a polished sky marked with eight symbolic stars, similar to those seen on early Constellation models. However, on the platinum version is a beautifully enamelled blue observatory medallion. 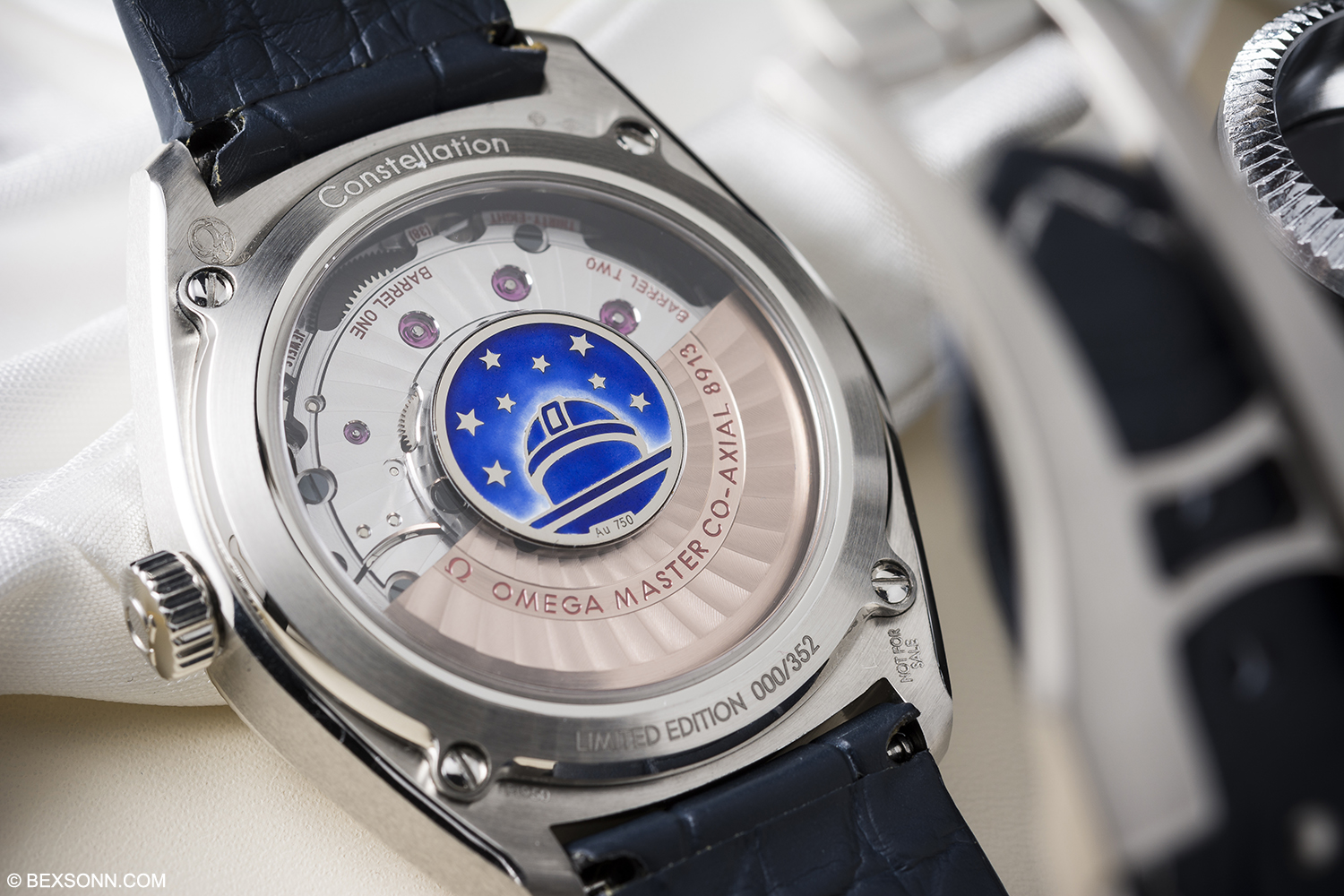 What is quite nice is that the medallion does not completely cover the rotor and movement so the Omega Co-Axial Master Chronometer calibre 8900 – for stainless steel and steel-gold models – or calibre 8901/8913 – for the gold and platinum versions, which features an 18K Sedna™ gold rotor – is visible. The reliability and precision of both anti-magnetic mechanical movements is such that the Globemaster is offered with a full four-year warranty and it is water-resistant to 10 bar (100 metres / 330 feet). 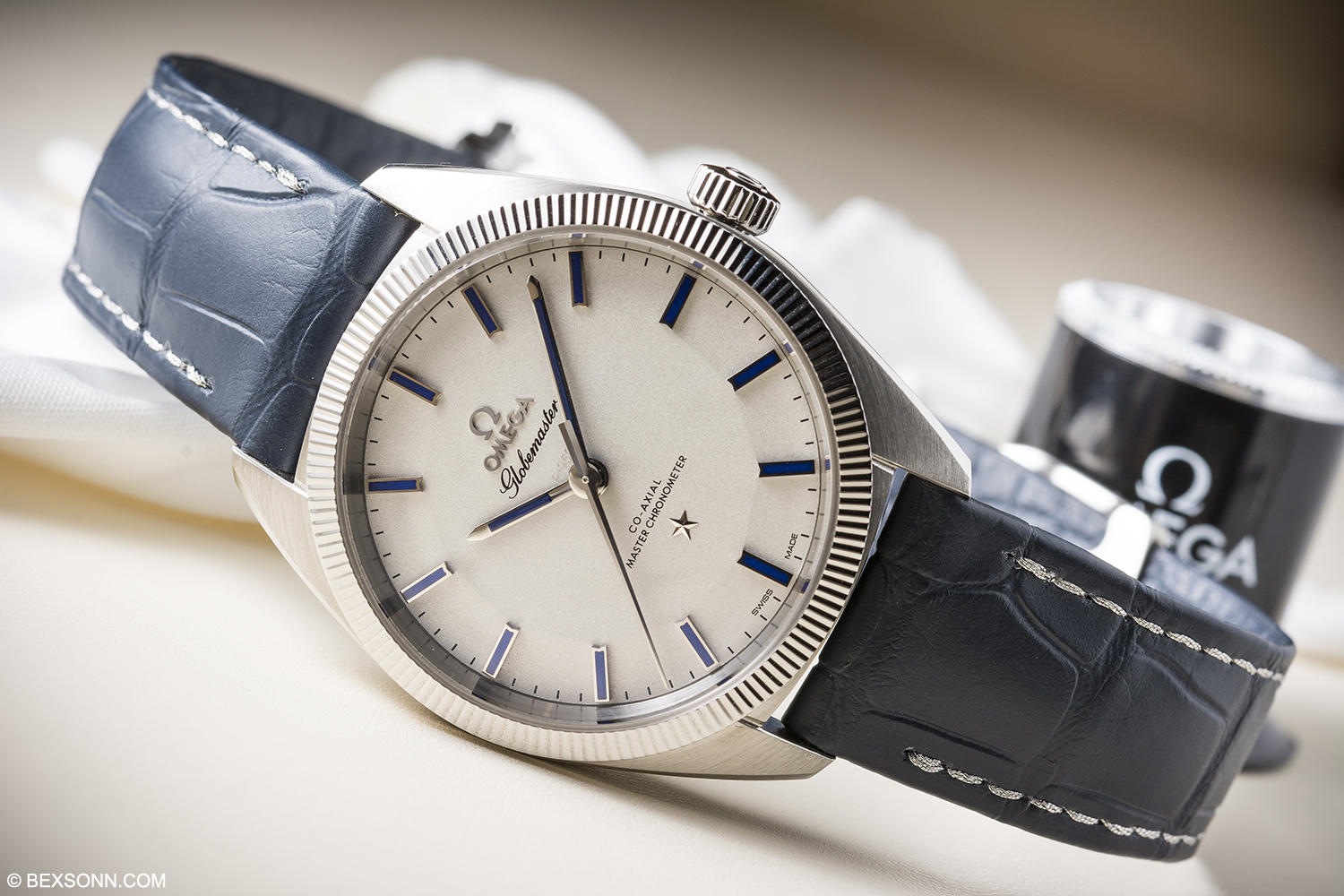 Personally, I think this newly introduced Globemaster range from Omega bodes well. Inspired by the double C case of the Constellation from the 1960s, it incorporates elements from its historical predecessor with the added modern technology. While, some may have criticised the fluted bezel for resembling that of a Datejust or Day-Date, it is in fact an element that has featured on Omega watches from the 1940s. It is a design trait that has been around for years, so it wasn’t uncommon to see similar designs being used by different companies as it is today. However, I think the real standout feature has to be the pie-pan dial that is very Omega and works exceedingly well on the new Globemaster.

The new Globemaster is available in a range of variations as mentioned above and prices will range from £4,785 – £13,670, with the exception of the Platinum version that is limited to 352 pieces and will retail for £28,100. All pieces are due for release in late 2015 but in the mean time for more information on the new Globemaster, visit the official Omega website. 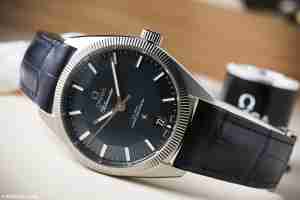 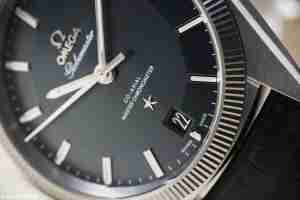 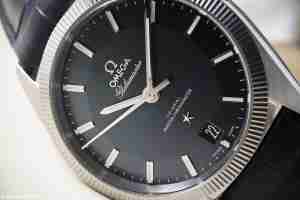 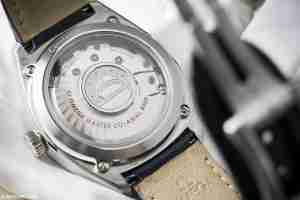 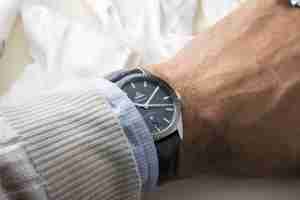 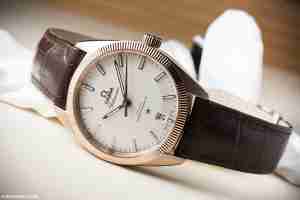 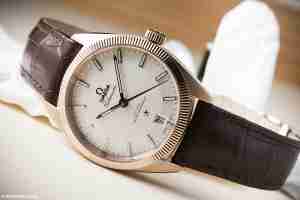 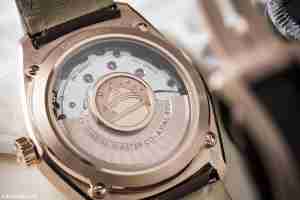 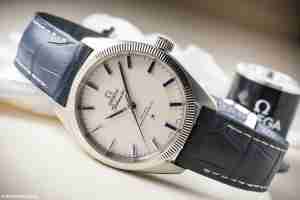 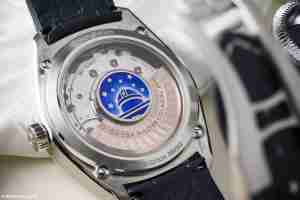