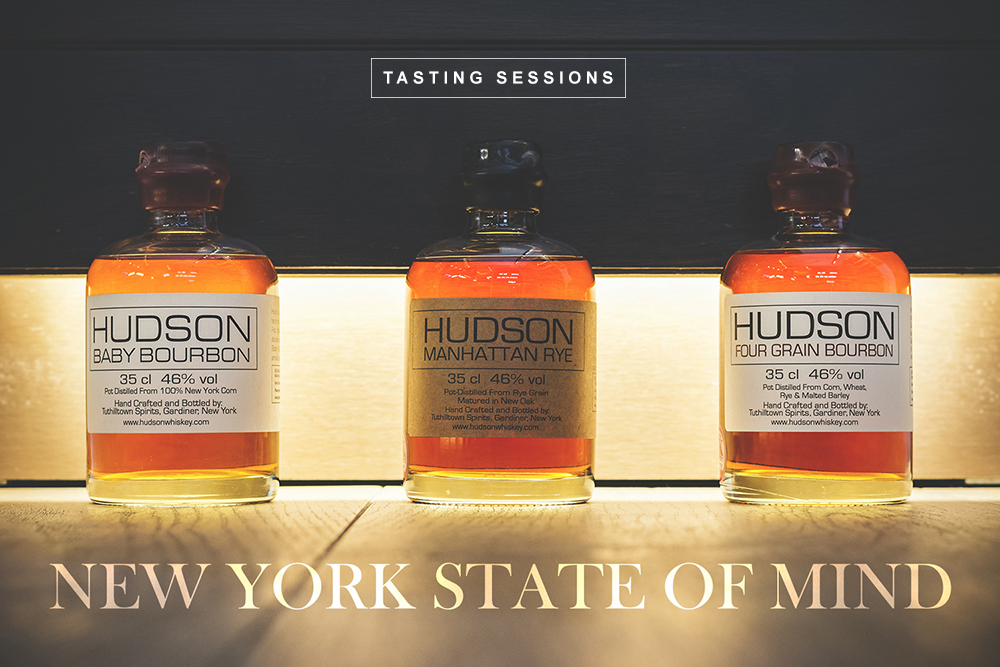 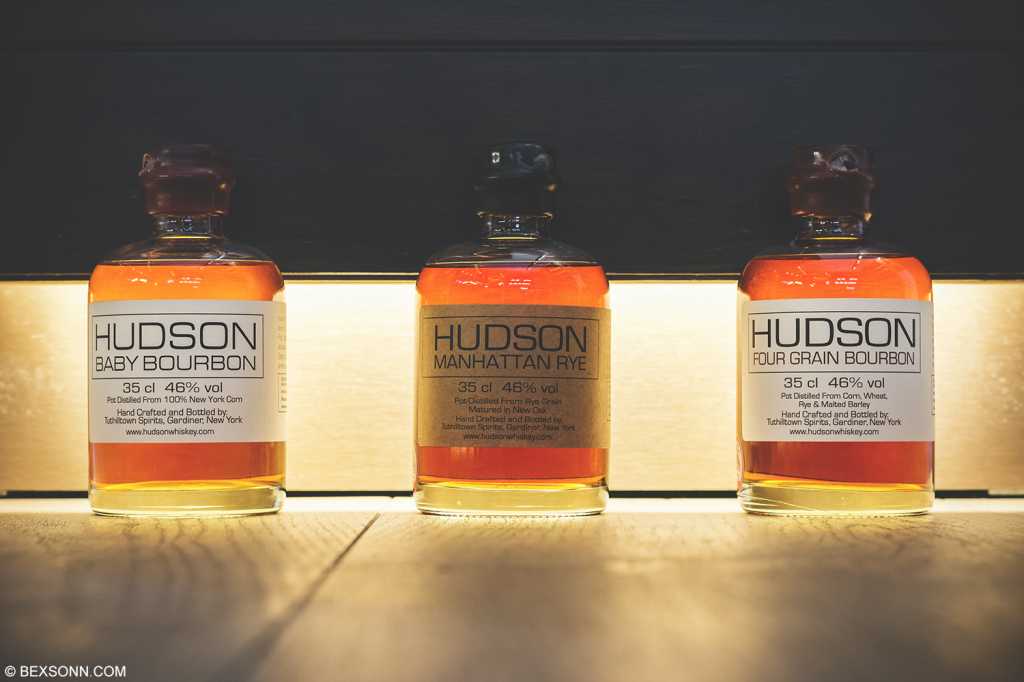 HUDSON BOURBON WHISKEY: A few weeks ago I was invited to a Hudson Whiskey tasting, well because of EU law, they’re not actually permitted to call it “whiskey” but we’ll get to that bit a little later. Indeed it was a great tasting which included some very nice cocktails that matched each whiskey perfectly, which we will get to. However, first I shall indulge you with a bit of history on this relatively new micro-distillery.

The initial idea of Ralph (founder) was to buy a farm in New York so he could run a bed and breakfast for climbers. He did actually find a farm that he could use for this purpose but attached was a grist mill. However, while going through the necessary steps to turn this old farm into a B&B, it just so happened that the neighbours, in close proximity, weren’t too keen on having people coming by and disrupting their tranquility. So for years the neighbourhood halted Ralph’s idea of starting a B&B, which resulted in lots of money being paid in legal fees but this was his dream, so inevitably he had to sell off parts of the farm to pay for these legal fees so he to get his B&B. Well, a few things started to shift all at the same time, Ralph got a visit from the local zoning officer and he discussed what could be done with the farm that the local people and courts could not stop him from doing? Because it was a farm he could’ve turned it into a winery, which he thought about but then he decided it was going to be a hard sell convincing people of New York state wine, plus it would take years for the vineyard to grow. The other option was to open a distillery! Things were looking up at this point as the New York state had just announced a new type of distillery license as they wanted to revitalize the agricultural industry. 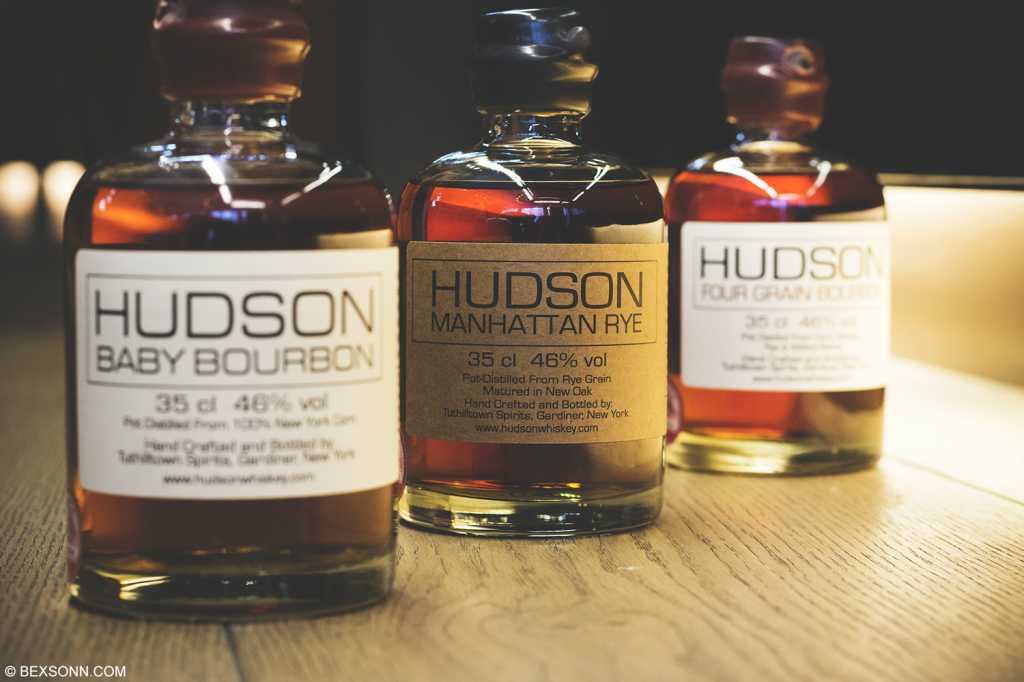 So along came Brian (co-founder), an electrical engineer, who wanted to buy the grist mill as he wanted a change of life. Brian decided he was going to make bread, however, this notion didn’t last very long. Now, at the time Ralph was conducting his own scientific experiments on the side – he was basically distilling alcohol in his kitchen so he could understand the process. And so Brian, told Ralph he wasn’t too sure about buying the grist mill. So Ralph thought, okay, we have the grist mill, we have the grain to make whiskey, we add water, we add yeast, we heat it and with a little tweaking we can make whiskey. They thought about it for all of half an hour (actually Brian sent Ralph an email three days later saying, “let’s do it”) and they went into business together, not knowing each other.

In 2005 the Hudson distillery produced it’s first ever alcoholic beverage – vodka and in 2006 corn whiskey, as this didn’t need to be aged. In 2007 the Tuthilltown distillery started producing Hudson bourbon. By complete accident they established they could mature the whiskey in 2 months by using very small barrels. Due to there being less surface for the whiskey to play in, it took on the flavour profiles, aromas and colour very quickly. Now, it’s one thing tasting something you’ve created and thinking, yeah this tastes pretty good but it’s a whole other thing someone else tasting it and agreeing. So what Ralph did was take this new whisky himself and Brian had made and got the best whiskey person in New York to taste it. It so happened she lived in Brooklyn and when she tasted it, she bought the whole batch, at this point Ralph and Brian knew they were in business. 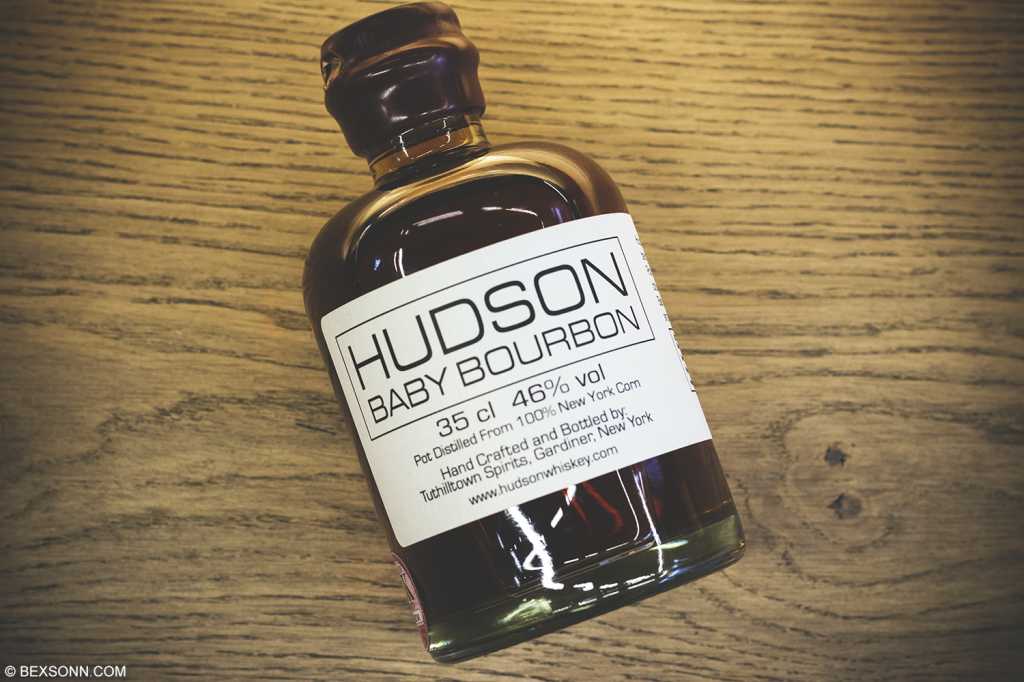 The first Bourbon ever to be made in New York; it has a light, single grainy character to the taste. It’s perfect as an introduction to American whiskey. Made from 100% corn including an heirloom corn, Wapsey, it has a narrow flavour profile with a bright, defined taste of caramel and vanilla with a warm finish. The barrel gives it a light sweetness and honey colour.

[col2]Old Fashioned: In an Old Fashioned glass: put 5 sprays of Angostura bitters, pour 1 cl of liquid sugar cane, fill with ice, pour in 4.5 cl of Baby Bourbon. Mix with and garnish with a twist of orange.[/col2] 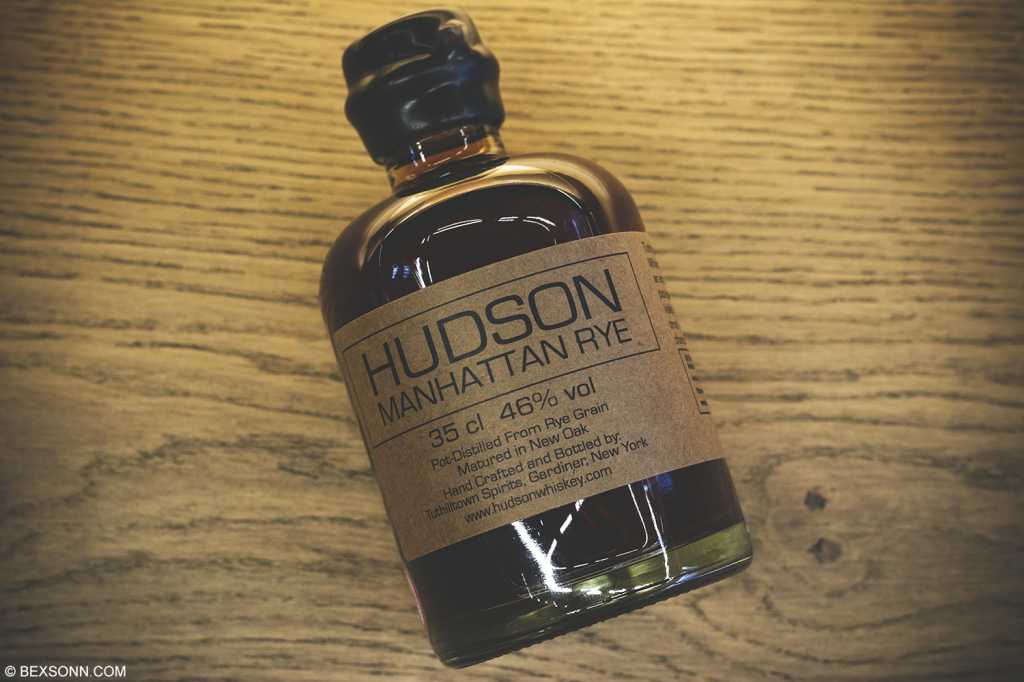 A wild, sly but charming guest with a mild sharpness that announces the rye to the taste buds. It’s peppery to the lips surrounded by the taste of vanilla and caramel. This rich, aged spirit is an original American whiskey. With an aroma slightly grainy like fresh cut hay which reveals the whole-grain mash. The Rye is a deep reddish colour resulting from its rest in small, white American oak casks.  It’s the first real rye whiskey made in New York since before Prohibition and the perfect main ingredient for the true. 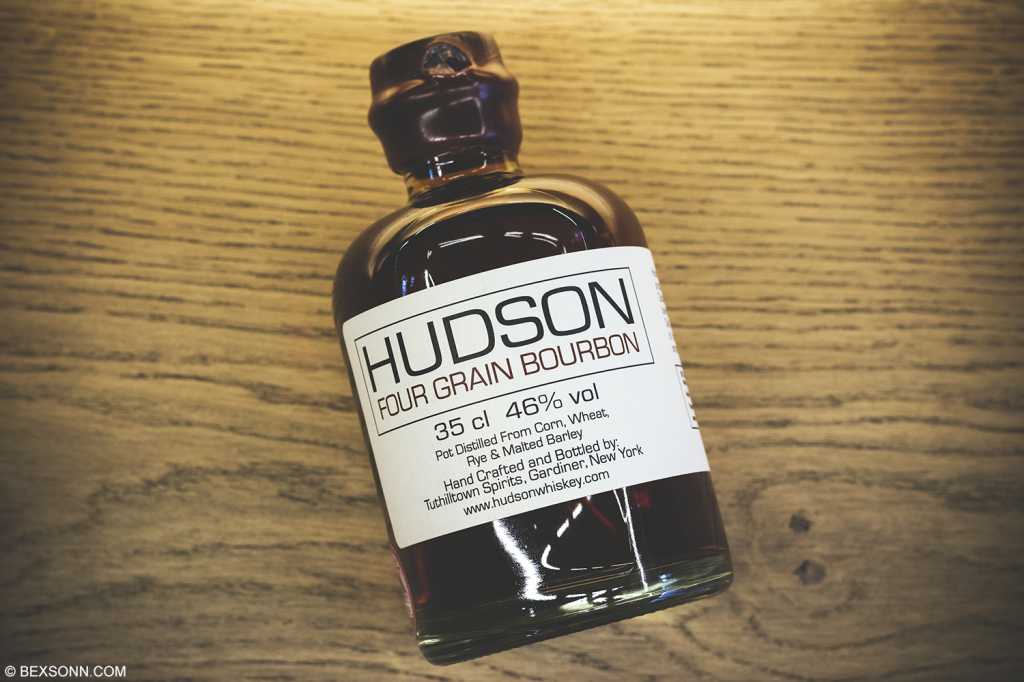 This is a rich, full-bodied whiskey with a full range of flavours which unfold as the spirit sits in the glass. The aroma begins when poured as a simple sweet whiskey and within minutes it progresses through a wide range as the four grains introduce themselves to your nose. The flavour also evolves, becoming richer and more complex as it rests in the glass.

All are bottled at 46º in 350ml “apothecary” styled bottles.

Hudson use “whole mash” fermentation – they don’t separate the liquid from the mash after the cook – it’s all fermented and distilled together so that they can extract significantly more flavour and oil from the grain – which translates into a richer flavour, silky texture and longer finish.

Hudson uses well water that is rich in minerals, which play nicely with the whiskey during mashing and fermentation and barrel maturation, only filtering out the basic impurities. Once maturation is complete, they bring the whiskey to bottling strength with reverse osmosis water for a clean, neutral quality that does not change the final product in undesirable ways.

All Hudson Whiskey is double distilled in manually operated pot stills with fractioning columns. Hudson started with a 100 gallon still and they have added three more stills of 250 gallons, 650 Gallons and 850 Gallons – all Christian Carl – which are steam heated.

Sonic Maturation – using sound (at first a heavy rap bass loop, now Dubstep) at night in the rickhouse to agitate the liquid in the barrels to speed up the maturation process. 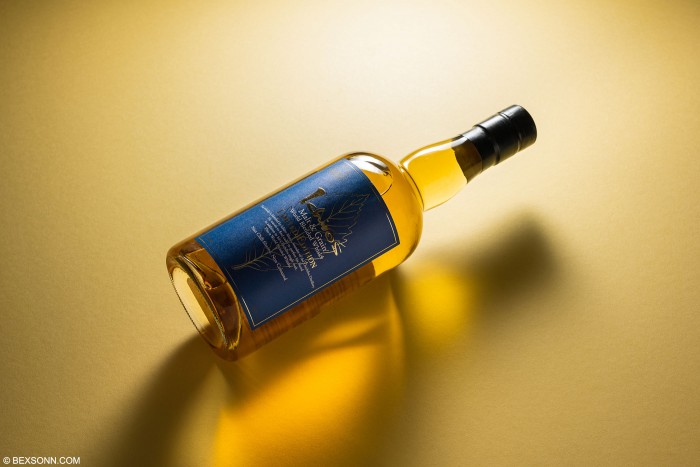 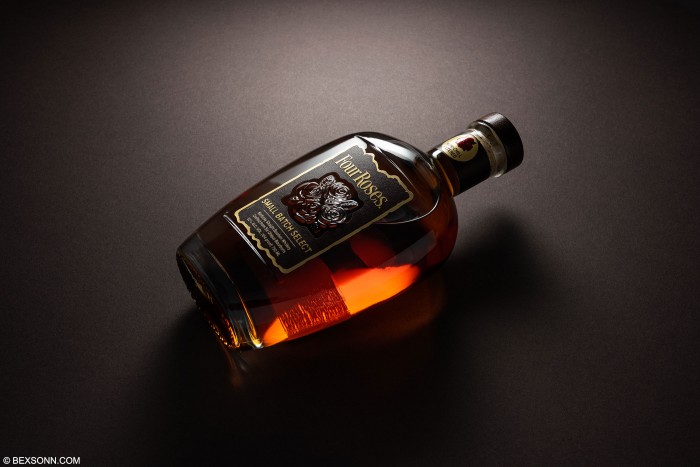 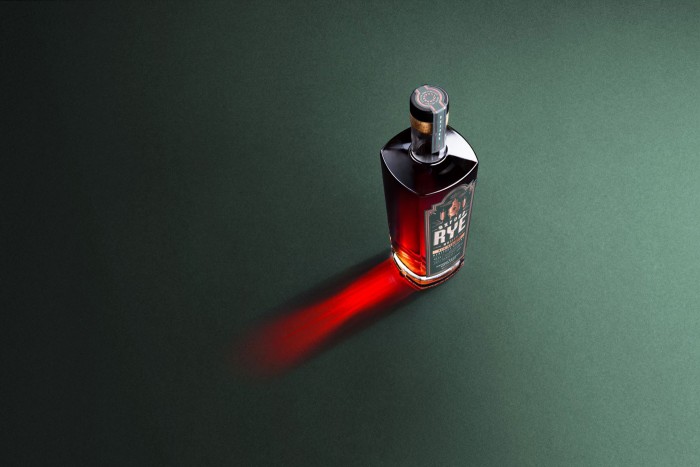