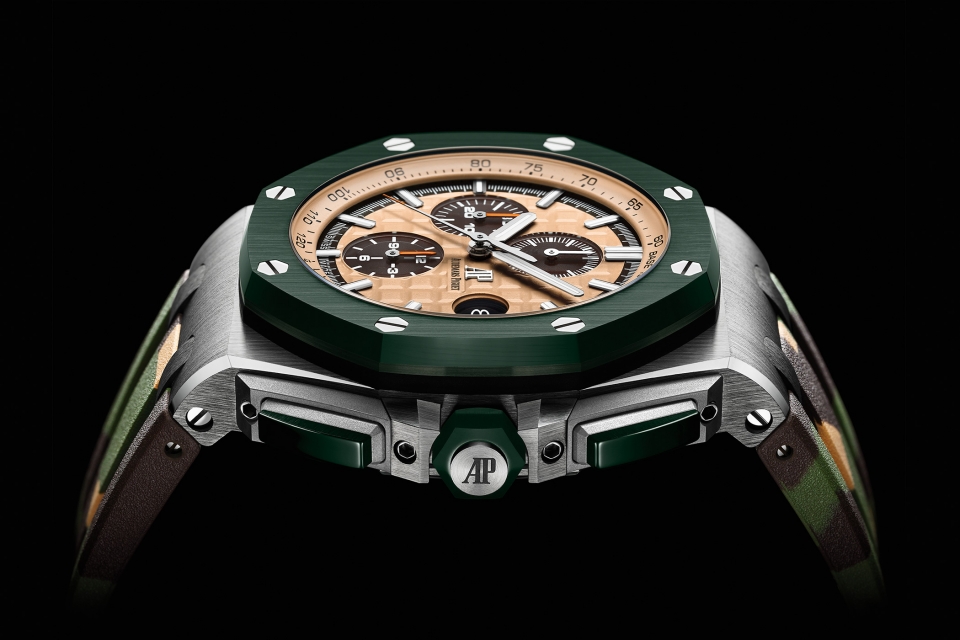 It would seem to have become a bit of a trend for Sean and I but every year for the past couple of years, the AP Royal Oak Offshore, in its many guises, appears to have captivated us – for better or worse. This year Audemars Piguet, introduced the new Royal Oak Offshore chronograph, in a 44mm steel case that sports a khaki green ceramic bezel, beige dial and to top it off, a camouflage rubber strap. It’s bold, brutish and yet somehow, I love it! 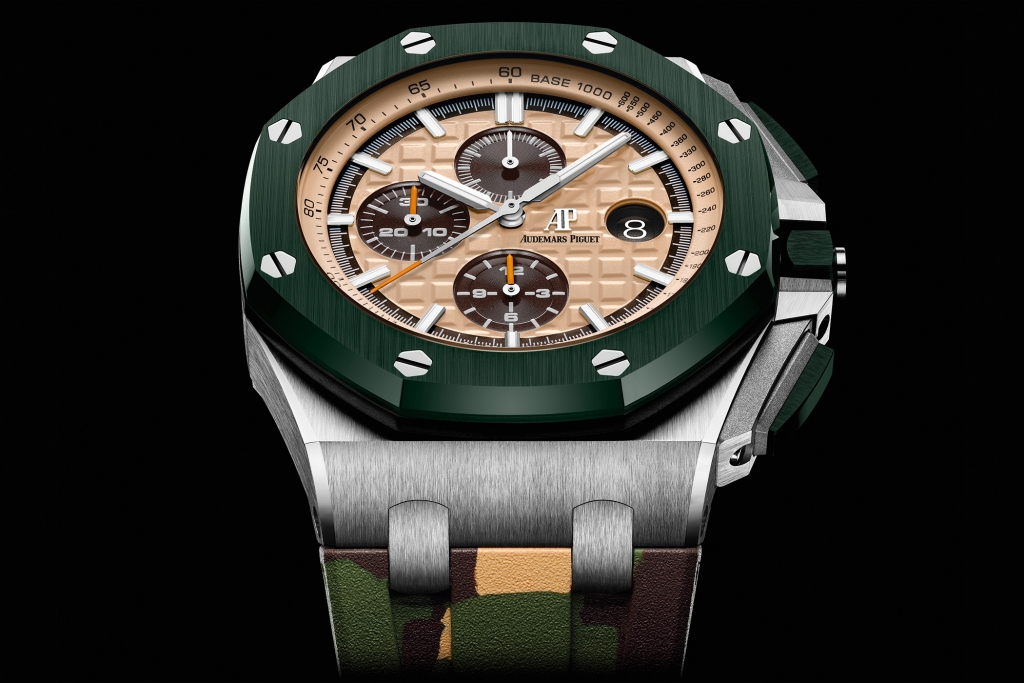 As already mentioned the stainless-steel case measures a rather large 44mm in diameter with a thickness of 14.4mm, it certainly isn’t a dainty piece of wrist wear but understandably it is a dive watch. As with diving, visibility is paramount, which explains the bright funky colours that AP have adopted. The beige “Grande Tappiserie dial, contrasting thick baton markers and baton hands certainly allows for maximum readability, whether in a dark room or in the ocean. The use of brown for the minute track and sub dials, contrasts nicely, as does the orange tips. The rubber strap is nothing less than what you’d expect from a manufacture like Audemars Piguet and the camouflage design is a nice touch, adding an element of ruggedness. Then there’s the green khaki ceramic bezel, again a detail that adds more depth. However, if you feel the need to tone it down a tad, you can swap it over onto the additional khaki green rubber strap included. 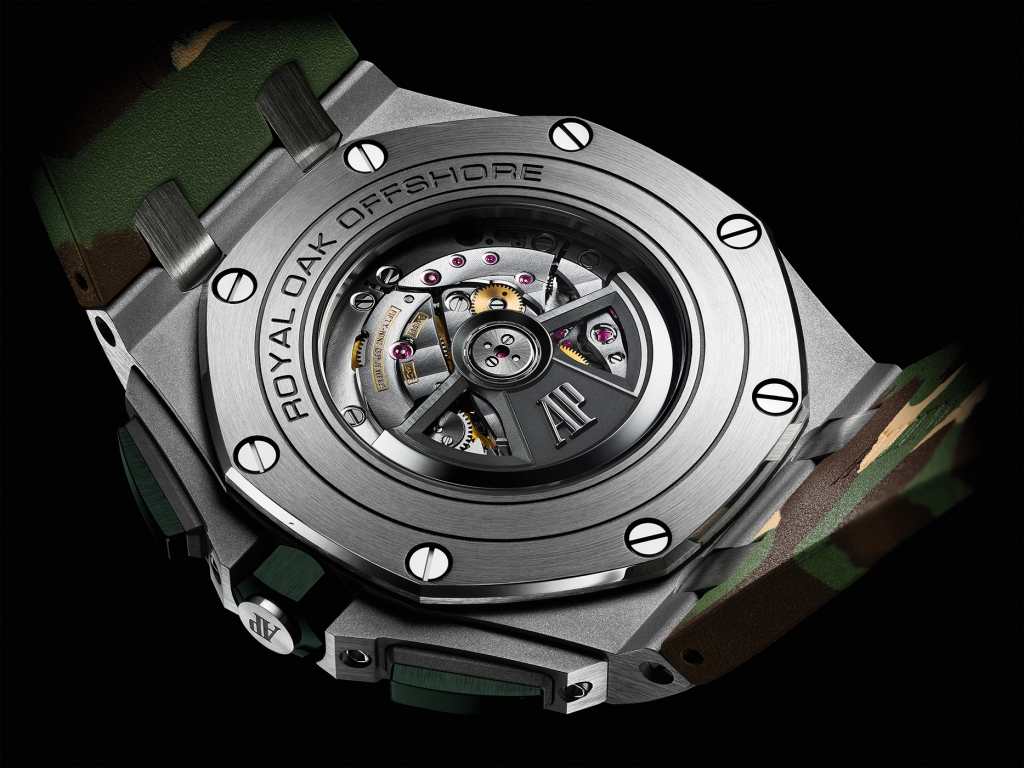 The movement housed inside this Offshore Diver Chronograph is the Calibre 3126/3840, a calibre used since 2007 for all of AP’s ROO Chronographs. The base calibre 3120 is made in-house by AP but the calibre 3840 is a Dubois-Depraz chronograph module fitted on top which is only decorated by Audemars Piguet. While this is no in-house movement and the current trend is certainly for a manufacture to have an in-house chronograph, the movement is as expected, very good. Perhaps the notion of having an in-house calibre as a prerequisite for quality is slightly overdone, especially as AP’s peers – Vacheron Constantin and Patek Philippe – both of late have released their own in-house chronograph calibres, putting pressure on AP as the supposed third member of the ‘holy trinity’ to up their game and release their own. This in turn may at times undeservedly discredit movements such as this Calibre 3126/3840, due to the ébauche used.

There are certain things that watch brands do that leave collectors alike somewhat perplexed and this could easily be one of those pieces. It’s big and bold and yet somehow Audemars Piguet have managed to make this new ROO Chronograph still look refined. The thoughtful use of colours and minute details make this, 100m water-resistant, divers chronograph a little bit special in my humble opinion.

The new Royal Oak Offshore Chronograph, as mentioned, is available in stainless steel and comes with a rubber camouflage and additional khaki green strap, and is priced at £26,100. For more information, visit the Audemars Piguet website. 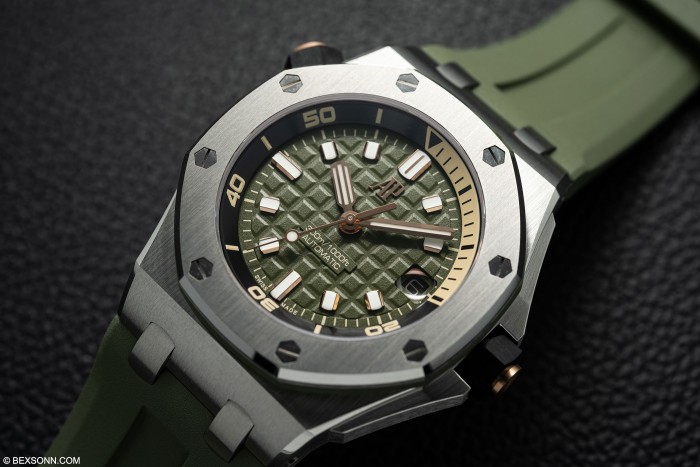