The MB&F HM4 Kittyhawk Pièce Unique is a symphony of mechanical artwork, or as one might say “Haute Horlogerie” at its finest. A few weeks ago MB&F celebrated the 10th anniversary of the HM3 Frog. However, this wasn’t the Machine introduced 10 years ago. A decade ago, Max and his friends also shocked the watchmaking world with one of the most outlandish Machines we ever saw from MB&F: the HM4 Thunderbolt. To celebrate this occasion, MB&F have decided to transform our original HM4 prototype into a Pièce Unique: the HM4 ‘Kittyhawk’. 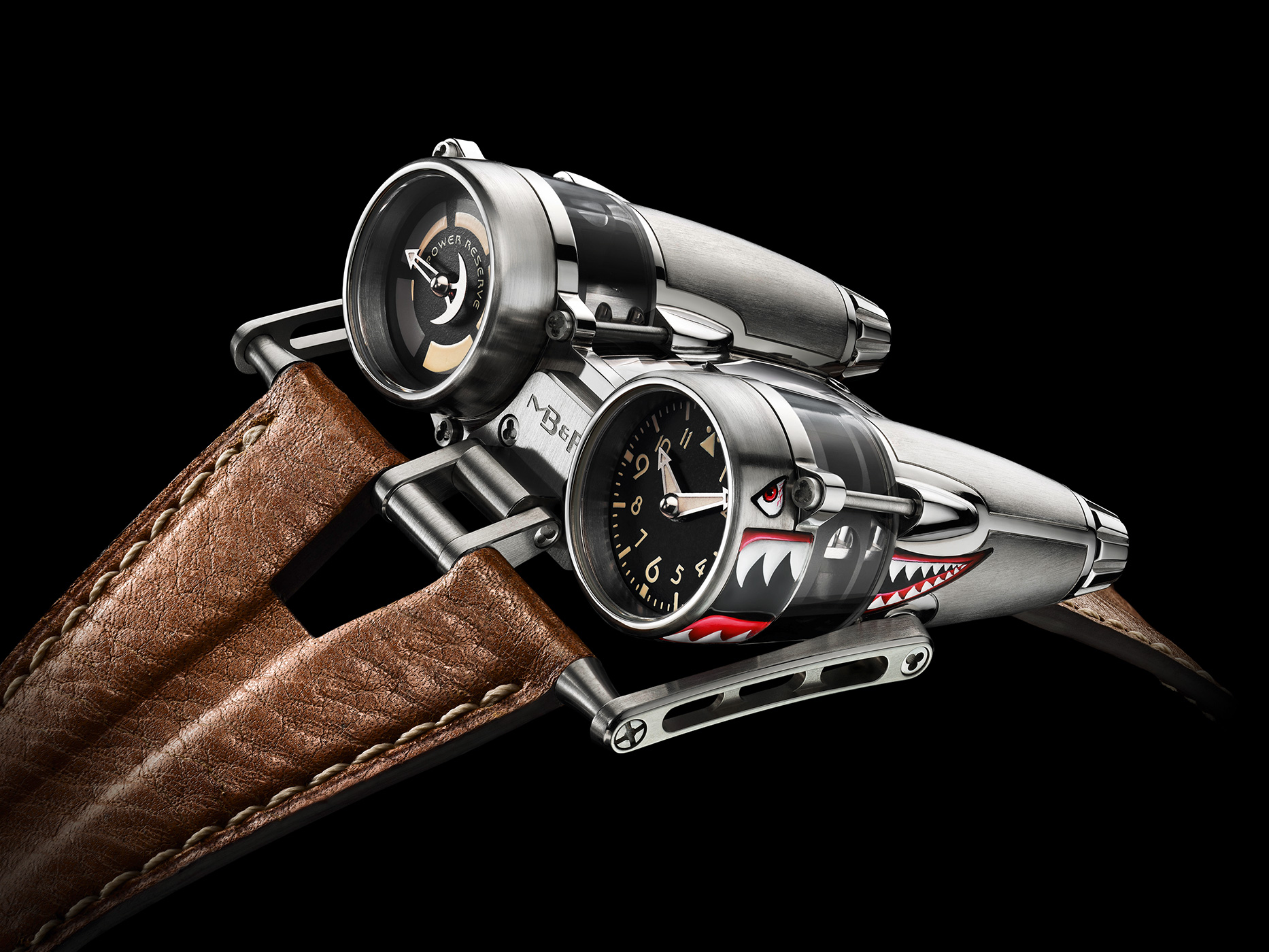 If you know a bit about aviation, the name Kittyhawk will not be unfamiliar. The Curtiss P-40 was one of the most important WW2 allied aircraft, produced between 1938 and 1944. Depending on the version, it carried nicknames like Warhawk, Tomahawk… and Kittyhawk. Criticised for its average performance on paper, its track record in combat was surprisingly good; still today, aviation experts argue about the plane’s merits and weaknesses. Regardless, it remains one of the most iconic aircraft of that time – especially the samples rocking the typical “shark mouth” and eyes.

Just like the “nose art” of those legendary WW2 aircraft, this Pièce Unique bears a hand-painted shark mouth and eyes, along with aged time and power reserve dials. The titanium case of the 10-year old prototype was first prepared to welcome the recessed painting by carefully removing microns of metal from the sides of the fuselage, following the shape of the illustrations. It was then handed over to the incredibly talented miniaturist painter Isabelle Villa, who delicately painted the menacing teeth and angry eyes. A final coat of transparent varnish was applied to protect the miniature painting, flush with the case.

HM4’s engine was entirely designed and developed by MB&F over three years of intensive work with Laurent Besse and Beranger Reynard. Two mainspring barrels connected in parallel provide 72 hours of energy, and they transfer their power to the dual jet-turbine-like indication pods (one displaying the hours and minutes, the other the power reserve) via vertical gear trains. Visible through a shaped, sapphire display panel on the top of the case, a distinctive streamlined cock supports the balance, its centre cut away to reveal as much of the oscillating wheel as possible and validating the “kinetic” in MB&F’s “kinetic art”. 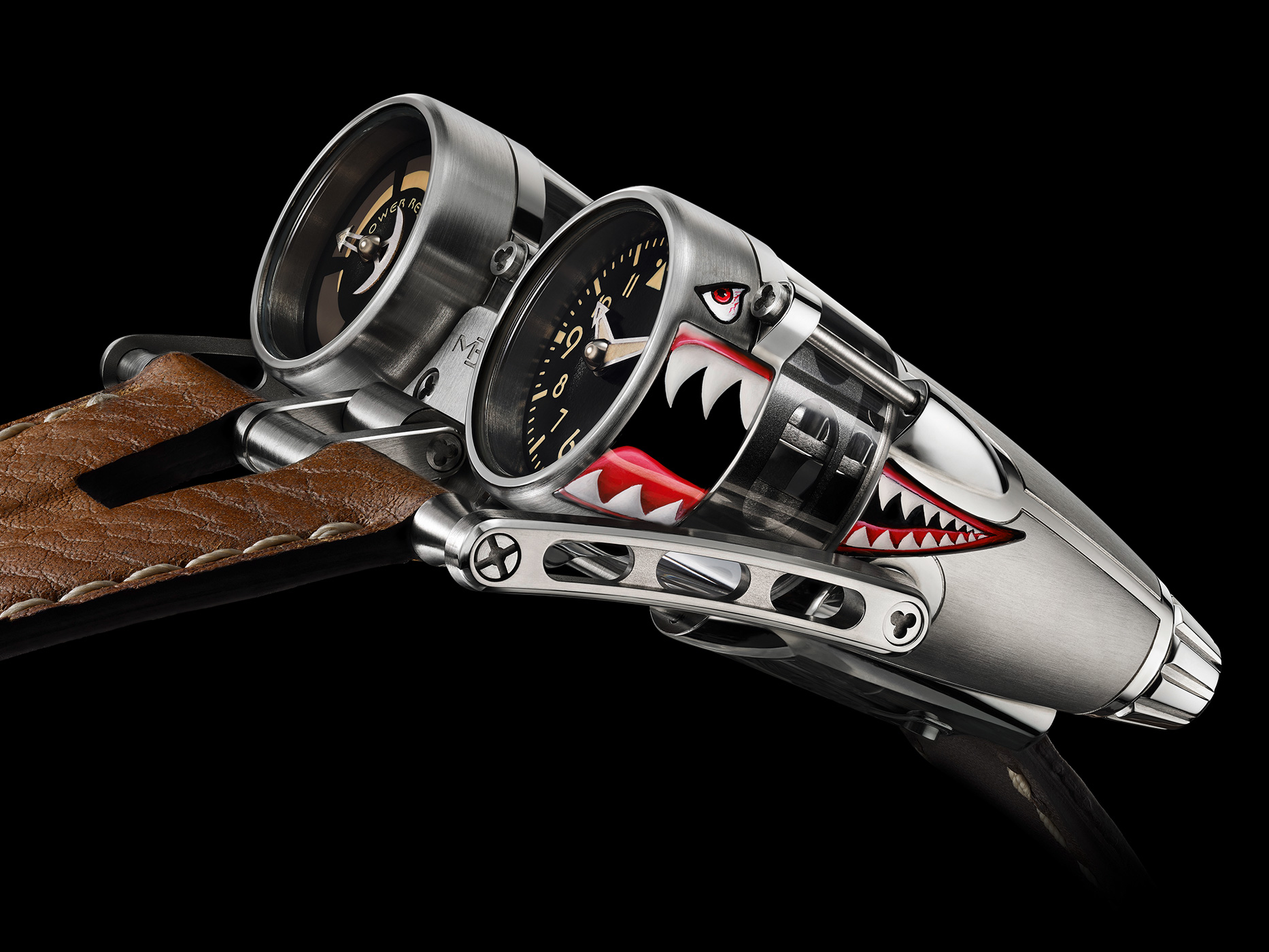 The case if the HM4 Kittyhawk is formed out of grade 5 titanium and sapphire with hand painted nose art, is undeniably inspired by aviation! Visually, the case is composed of three parts: two streamlined jet-turbine-styled pods supported by a horizontal section housing the engine, clearly visible through transparent sapphire display panels and the central section of the case itself. The case also includes articulated front lugs; making the HM4 fit and feel perfect on you wrist. MB&F have used methods borrowed from aeronautic engineering that are visible in the externally mounted screws, which offer both rigidity and watch resistance to hold the case’s three sections solidly and elegantly together. It is fixed to the wrist by an authentic vintage leather strap crafted from Swiss military bags with contrasting white hand stitching.

Timepieces are designed to tell the time and despite the unconventional manner the HM4 displays this in, it still excels in this department. On the left pod, the power reserve is clearly indicated by a skeletonised hand, echoing MB&F’s battle-axe motif. On the right, hours and minutes are displayed by bold, arrow-tipped Super-LumiNova filled hands which over above a military style dial. Each of the two dials are directly controlled by their own crowns, one to wind and re-fuel the tanks, the other to set the time, which provides direct and instantaneous feedback of the action performed.

The HM4 was the first MB&F Machine I saw in person – way back in 2003. Of course, not much has changed on the HM4 and yet I still marvel every time there is a new one. While many will argue it is very ostentatious and expensive, this is exactly what Haute Horlogerie is. It is the reluctance to conform to the norm and the complete expression of one’s imagination. Which is something that Maximilian Büsser and his Friends have executed well in this (time) piece of artwork, depending how you look at it.

The MB&F HM4 Kittyhawk Pièce Unique, is just that unique. For more information on this exquisite timepiece, visit mbandf.com.