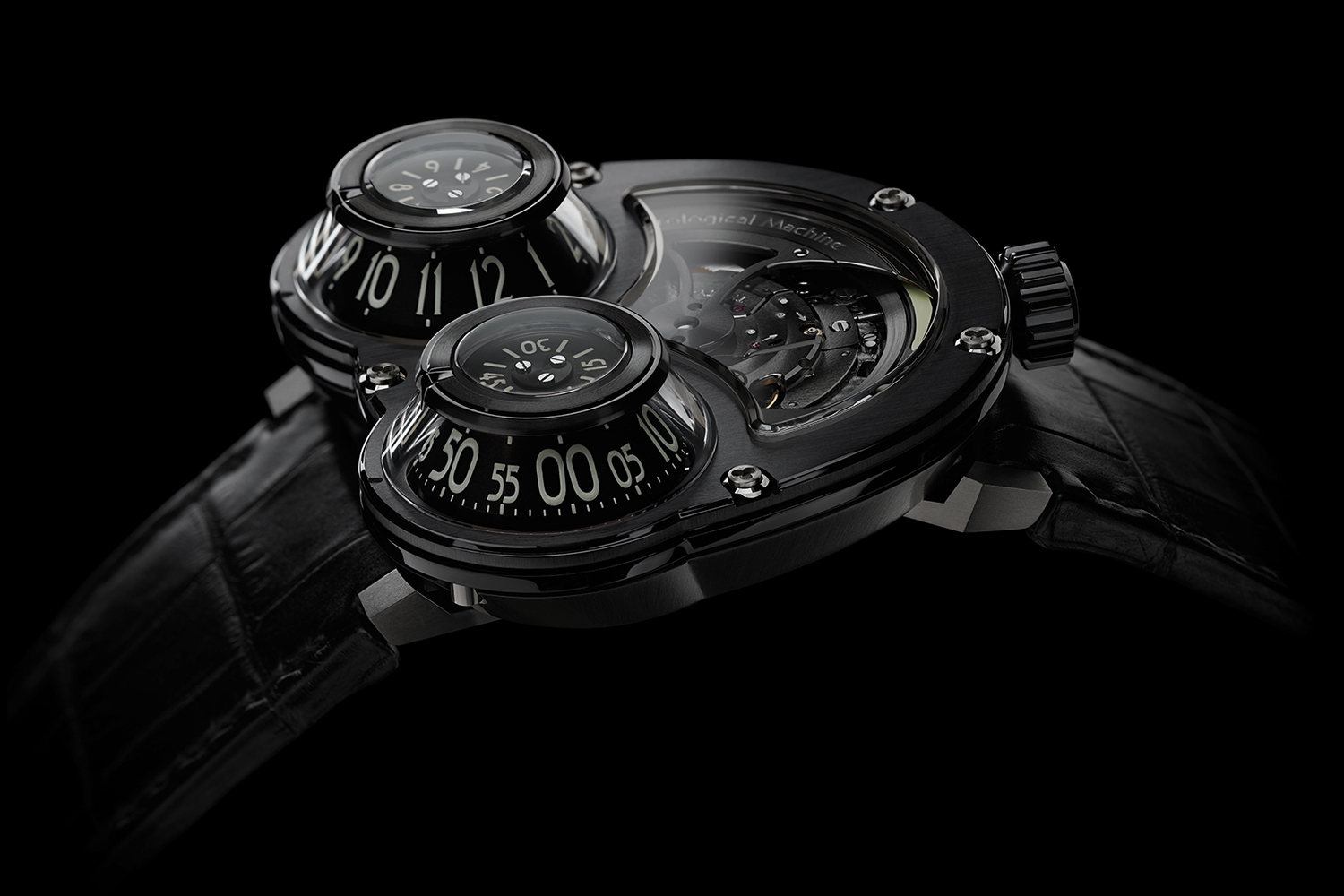 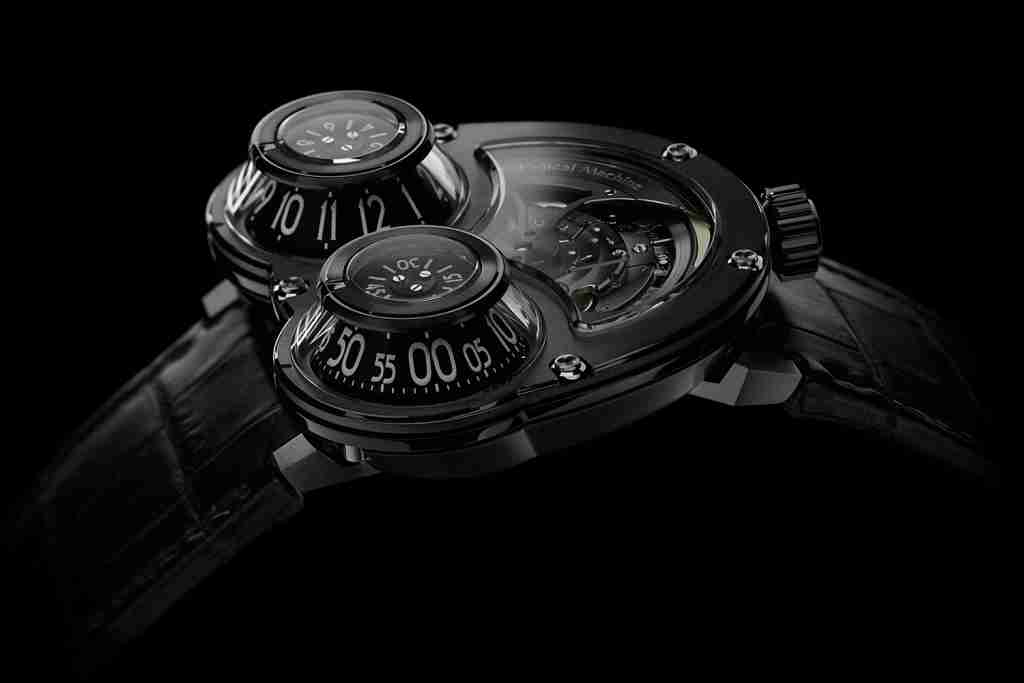 HM3 Megawind Final Edition: This watch is awesome to say the least, I’m close to being speechless, but this timepiece demands an in-depth review. The coupling of light and dark is a quintessential concept of the HM3 who typically exercise the art of contrasting. And they absolutely did not deviate from past greatness when it came to their concluding Horological Machine N°3 timepiece, which was first beheld by the populous in 2009. Its sleek metallic colour, curious case and alien, neon green light configurations, lead me to immediately think of a mix of Tron and a Star Warsesque spacecraft, navigating the wearer’s way in the relentless darkness of outer-space.

The unusual asymmetrical construction of the case primarily captured my attention, due to its unmistakably aesthetic familiarity of a spacecraft with dual engines. It features twin robust 3 dimensional gold sapphire crystal frustums encasing luminescent GL C3 Grade A Super-Lumi Nova numerals displaying the minute and hour indices. Looking closely at the watch face 5 screw like decorations seem to slip down surreptitiously on the line of the thickness wavering bezel, which are dotted round the perimeter. This radical timepiece demonstrates the phenomenal stroboscopic effect by hiding and revealing a band of bright Super-Lumi Nova positioned underneath the casing opposite the tall minute and hour cones.

In regard to the movement, thoughtfully placed in a similar positioning of a classic spacecraft windscreen, where the crews control panel would typically be, sits the 3 dimensional horological engine designed by Jean-Marc Wiederrecht which is visible through the sapphire crystal protected face. Its balance oscillates at 28,800bph, whilst simultaneously making use of an over-sized rotor. Turning the Megawind Final Edition over, the full complexity of the 270 component movement can be admired, one will notice the inclusion of an automatic winding rotor in 3 parts, a titanium hub with outer sections in 22k gold which are fastened with rivets and the words ‘Horological Machine’ etched on it, further illuminated by the neon green glow of the Super-Lumi Nova. Lastly, it is decorated with a Geneva wave pattern and the attractive signature and lettering ‘MB&F Horological Machine No.3’ inscribed on the base-plate. It possesses 36 jewels which are all functional. The entirety of the reverse mechanisms are also secured under anti-reflective sapphire glass. 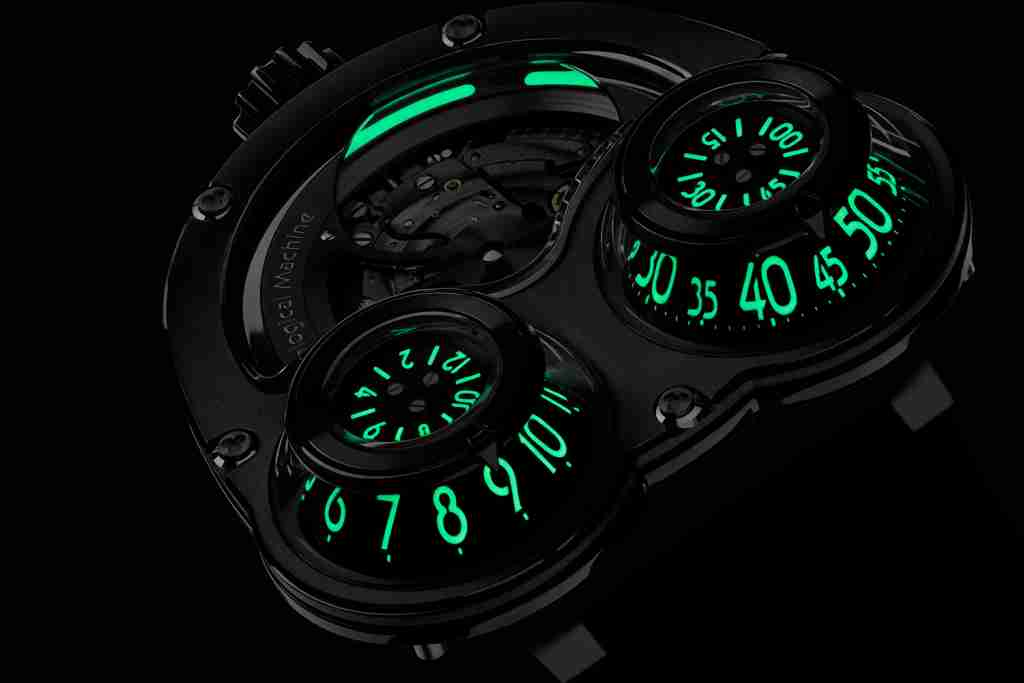 Like a shooting star in the stratosphere only 25 Megawind Final editions are available, MB&F decided that this watch family, Megawind, should go out with a bang honouring its last instalment. Let us not forget the various predecessors, the original HM3s, the second-generation Megawinds and the JWLRYMachine made in collaboration with Boucheron. The Final Edition is available in black PVD treated 18k gold which looks matte in appearance along with titanium variations of 18k white gold/titanium or 18k red-gold and titanium. The watch measures 47mm x 50mm x 17mm, which is inclusive of its lugs and crown.

It has a black screw down crown also coated in PVD attached to the dark case where the hour marking 9 o’clock would conventionally be found. The Final Edition’s hand stitched strap is secured by 2 sharp slanted lugs on the underside of the minute and hour display cones in a dusky black leather with an alligator detail which neatly harmonises with a custom designed titanium folding buckle. Additionally, the buckle colour is identical to whichever case colour the timepiece was purchased in. It’s admirable usage of dark and light, movement visibility, extraordinary case construction and advanced engineering is something we must unfortunately bid farewell to as the sun sets on its era, eclipsing the speculator evolution and journey of an inspired piece of horological engineering.

For more information on the HM3 Megawind Final Edition,visit the official MB&F website.