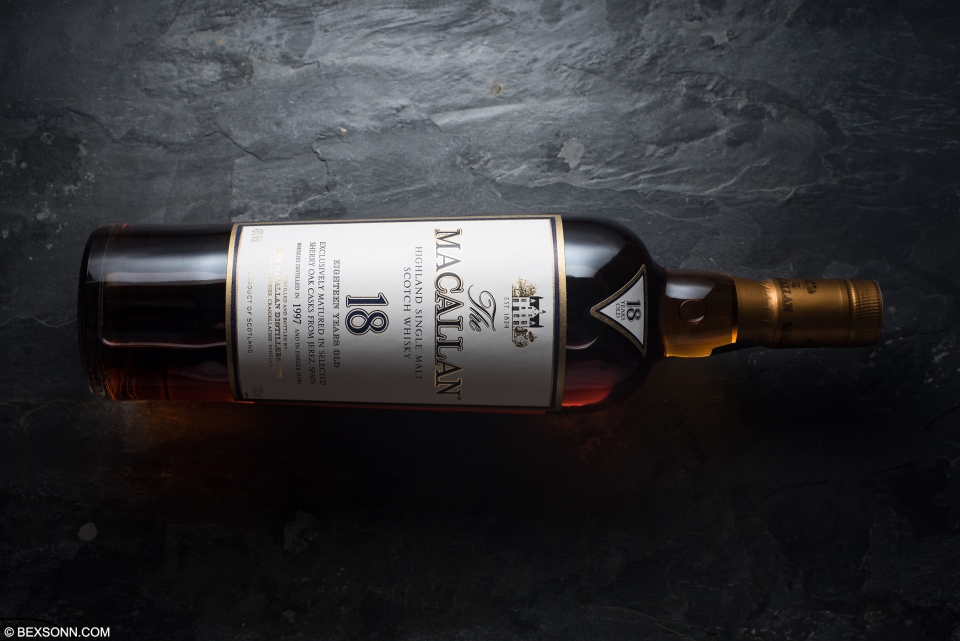 Last week, we highlighted the 12-year-old, entry-level, single malt scotch from Macallan’s sherry oak finish range. As may have already read, The Macallan is the third largest selling single malt scotch in the world and Macallan’s Scotch whisky is, primarily, matured in oak seasoned with sherry brought to the distillery from Jerez, Spain. The sherry cask finish scotch from Macallan is what could be considered their core age-statement range. That said, the 18-year-old expression from this range is perhaps one of their more regularly sought-after drops and is one of the few sherry cask finish expression, from Macallan, that is defined by the year it was distilled. Macallan scotch finished in sherry oak is known to be deliciously smooth single malt, which is rich and well-rounded but perhaps a little too is easy to drink and of course will not disappoint.

On the nose: you’ll experience an initial waft of sherry, dried mixed fruits (raisins) and vanilla. This is followed by notes of ripe raspberries, strawberries and toffee. You’ll get a bouquet of butterscotch and the spiciness of cinnamon and cloves, followed by suggestions of candy apple. Rounding off the nose is a a touch of ginger and a hint of wood smoke. On the palate: it has a lovely milky texture and those sweet sherry notes are present, followed by vanilla, marzipan and ginger stem undertones. Those spices nosed start to emerge, alongside some star anise. Going back for more, notes of maraschino cherries start to appear, followed by those butterscotch notes, toffee, with a hint of oranges, dried figs, apricots and walnuts. The finish: is long, sweet, with lingering mixed dried fruits, ginger and smoke.

The verdict: As you know, The Macallan as a brand are so well revered around the world and this 18-year-old expression from the distillery based in Craigellachie, Speyside – is just a drop of beauty. This is a Scotch that on the nose is rather rich and complex but on the palate is much mellower than one would’ve thought. It is a delicately balanced scotch but balanced to perfection – from nose to finish it is truly stunning. With an ABV of 43%, this is probably not a Scotch that I would add any water to but if you feel the need then only add in small quantities until it just right for you.

The Macallan 18-year-old Single Malt Scotch Whisky from the Sherry Oak range is available online or in well-stocked Whisky Shops, for approximately £180.

For more information on the Sherry Oak  18-year-old, visit the official Macallan website.