Love letter to the Rolex Day-Date 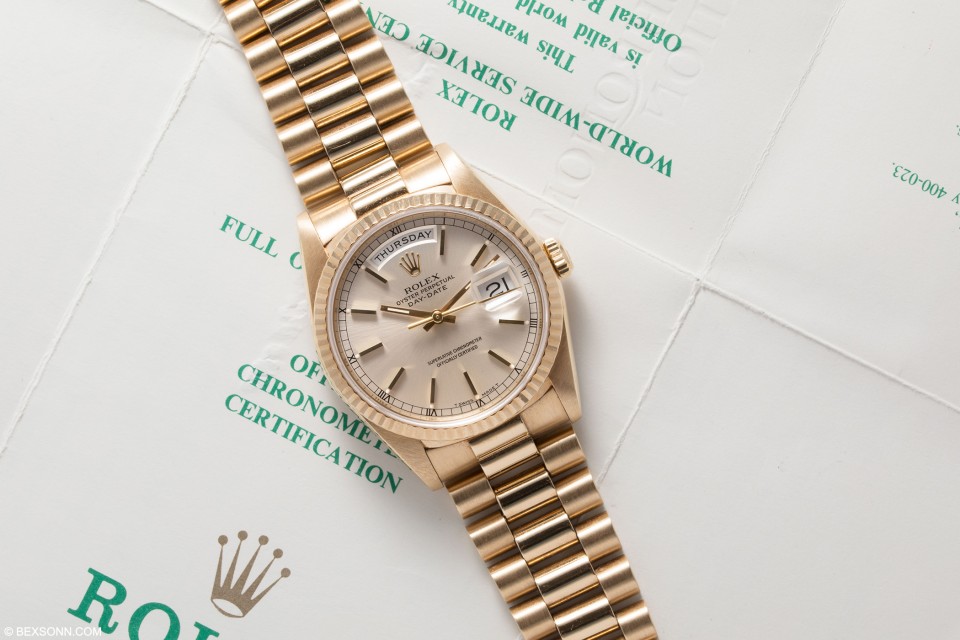 The Rolex Day Date: I will admit, I found it quite hard to decide where to begin for such a conflicted watch. Iconic, yet forgotten in this day and age. I am writing this article in an attempt to revive and pay my respects, to what is in my opinion, Rolex’s most underrated watch.

Since its launch in Basel in 1956, the Day-Date’s fundamental design language has not changed. With the day displayed at 12 o’clock and the date at 3 o’clock, it was the first watch to ever display the day in full yet despite this, it was not so much the technicality of the watch that propelled it to legendary status, but how it was marketed. When it was released, Rolex decided that this would be the flagship of the brand, strictly to be made only in precious metals and priced above and beyond their ‘pedestrian’ sport tool watches.

As a result, with Rolex advertising the yellow gold Day Date for ‘The man who’s life is an event’ and describing those who wear a Day-Date as ‘Men who guide the destinies of the world’, it quickly became known as the statement watch of the century. It even went so far as being colloquially known as the ‘President’ after Rolex allegedly gifted one to the then President of the United States, Dwight Eisenhower. The crown managed to create the perception of the Day Date as a watch for those who have made it, a statement of masculinity and stability, of power and success.

That said, it is important to mention that this article, is not a tribute to Rolex Day-Dates in general, but specifically, ones in yellow gold. Sure, they made it in white gold and very rarely in platinum back in the day, but in the 20th century, it was all about the yellow.

Fast forward to the 21st century and there are very new, distinctive stereotypes of the yellow gold Day-Date. And yes, to my dismay, they are mostly negative. I’ve heard it all, from critics saying only rappers wear it, to others dismissively calling it an ostentatious watch for the nouveau riche. When one thinks of a gold Rolex, these thoughts invariably will come to mind, with bling and diamonds and “popping” champagne alongside everything loud associated. For me personally, being Chinese and coming from Asia, we have our own stereotypes of the gold Rolex. Ask any of my friends and they will say the first thing that comes to mind is a rough (but rich) Chinese businessman with a less-than-stellar fashion sense wearing a loose gold Rolex on the wrist. Think middle aged man with a bit of a belly (business is good, after all), in an untucked, patterned button-up shirt a few sizes too big, baggy pants, sometimes rocking a moustache, sometimes wearing gold rings and necklaces and you get the idea.

So, all in all, wherever you are in the world, it is not a good image for the watch that was once for ‘men who guide the destinies of the world’. Frankly, if these are the individuals running the world, I don’t want to live on this planet anymore.

Throughout it all though, there is one underlying theme that resonates with me which made me want to do a write up about this and that it is not the watch objectively, but the individual that has come to represent it. It is not what you are wearing, it is how you wear it and I think that a gold Rolex Day-Date is one of the most timelessly stylish watches an individual can wear – if done correctly. You might be thinking that the prevalence of today’s stereotype makes it so that if one were to courageously wear a gold Rolex, that it would be futile and an immediate association with all that we try and avoid. But let me ask you this, if you saw Donald Trump wearing a yellow gold Day-Date, what would you think? Contrast this with, what you would think if you saw Roger Federer in the same watch? Exactly.

Now, I might’ve been slightly hyperbolic. I’m not saying I’m anywhere close to the grace and finesse of Roger Federer, but(!), I am saying that one needn’t be so extreme and that it is possible for one to pull off a yellow-gold Day-Date without having to either drag along those dreaded stereotypes or change the destiny of the world. That is why last year, I went and bought one for myself.

As you know, most individuals will not consider a Day-Date these days, instead opting for the more ‘relevant’ sports models. I’ve always somewhat been subtly contrarian in the way I see my style and when I realised what I call the ‘confliction of the Day-Date’, I just had to have one. Like what on earth would I, a relatively young guy, be doing wearing a yellow gold, old man’s watch when I should be lusting after a Hulk Submariner or a Batman GMT!? I loved it.

While the Day-Date comes in many variants, from different materials to a whole host of rare and wonderful dials, the one I opted for was the most standard vanilla version you can buy – 18-carat yellow-gold with a silver sunburst dial. Somehow, there’s a certain juxtaposition of a watch being ostentatiously loud in its form but being simple at the same time that really resonated with me. I saw it as the purest and most honest interpretation of an iconic watch, without any extra bells or whistles needed.

Specifically, the reference I went for was the Ref. 18238: A 36mm (the perfect Day-Date size) watch from the 90’s that is largely unwanted these days. As a result, I got a full set, mint example for less than what you would pay for a watch only, matte dial 5513 Submariner in average condition. Let that sink in.

One of my favourite things about this watch is the President bracelet. It is, if not, one of the most beautiful and elegant bracelets ever designed and if you do go for a Day-Date, I must say that it is a completely different experience with the bracelet. In my opinion, it is a must. I opted for the later 18238 reference because it had the newer President bracelet with an invisible clasp and wore much more elegantly than the older clunkier bracelets with a visible clasp.

The weight of the watch feels fantastic, just heavy enough to know you have something good on your wrist. Combine this with the cool sensation that only a watch made of gold can impart and you get a watch that brings me immense joy every time I put it on.

You might be thinking that because it is gold, the Day-Date is quite limiting when it comes to matching it with your wardrobe, but let me tell you otherwise. I have worn this watch at more formal events with a jacket and a shirt, but equally as many times wearing swimming trunks, a t-shirt and slippers. There is a certain nonchalance, or god forbid I say it, sprezzatura, in such an outfit and I keep returning to the adage that it is not what you wear, but how you wear it.

I am not denying that this is a statement watch. I have watches that are multiples in value of what I paid for this Day-Date and yet, when I wear this, it gets the most attention. Sure, some may say that it is over the top and a disgusting act of opulence. Though they have a point and I do agree that it is loud, all I am calling for is some balance in one’s perspective. Why is it that when a Ferrari in its iconic Rosso Corsa passes by, our feelings veer more towards that of admiration rather than disgust?  Rolex never intended this to be an understated watch, but a statement of presence. It is just that somehow along the way its meaning deviated and became known for something less than desirable. I do not see it changing anytime soon and I have written this article less as a plea for trends to change but instead more of a self-indulgent love letter to the one and true king of the Crown. No matter, despite all of this, my yellow gold Rolex Day-Date still remains one of my favourite watches of all time…