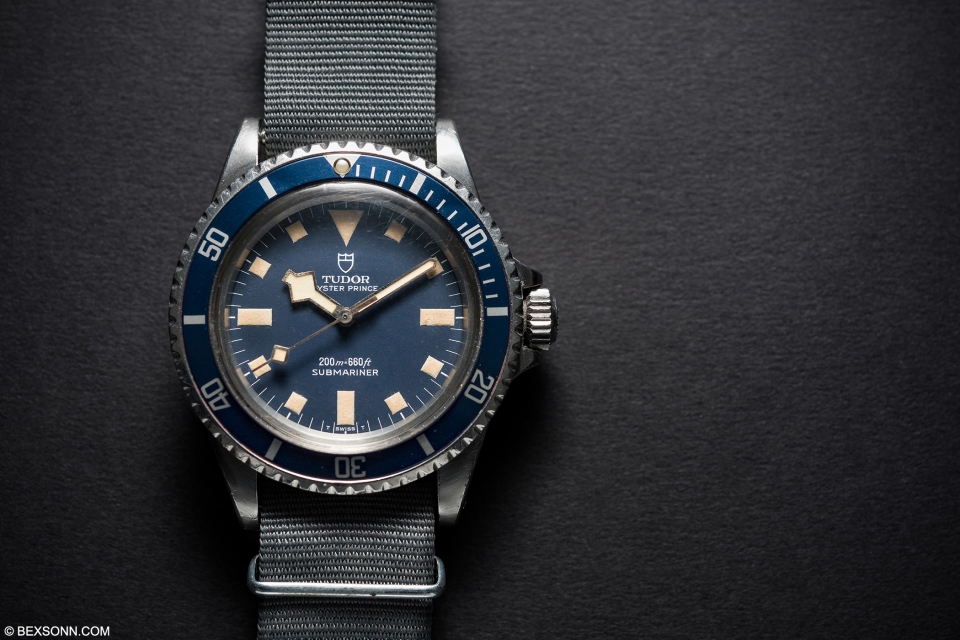 The auction season isn’t quite over yet, and for those of you who haven’t emptied your pockets in Geneva, you’re in luck as there are some great pieces on offer this weekend at Watches of Knightsbridge. Last week I covered a few lots running with the theme of reverse panda chronographs and this week is the second instalment, for the other various lots that caught my eye. 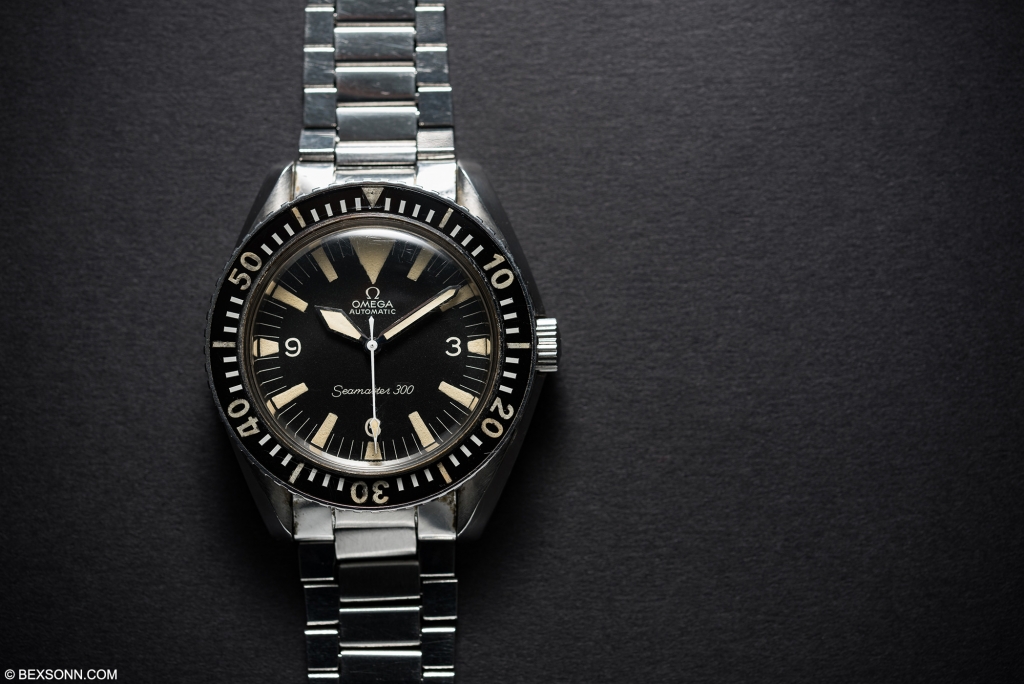 The Omega Seamaster 300 is a legendary watch, while not as appreciated as its Rolex Submariner brother, I would consider it just as important in regards to iconic models. There are a number of caveats when purchasing these though, as there are many fakes and frankens around where either parts have been assembled from different eras, or with parts that are just downright fake. It is one of the trickier vintage pieces to navigate, and that’s why when I saw this on offer I just had to take a closer look.

The Seamaster 300 came in a few dial variants, and none rarer than the ‘Big Triangle’. It is called this because of the 12 o’clock luminous marker depicting a full triangle, whereas the more common SM300s featured a cut-off triangle. They are very hard to come by and part of the appeal of the ‘Big Triangle’ is the fact that they were used on the Seamaster 300s issued to the British Royal Navy. With the bigger triangle at 12 o’clock it made it easier to see when diving, giving off a utilitarian charm to it. In fact, while the Rolex Military Submariners are more popular, ever notice the similarity in the hands of a Rolex MilSub and an Omega SM300? Yup, the Seamasters were used first and when they transitioned to Rolex, the Ministry of Defence requested that the sword hands and seconds remained. Anyway, interestingly some dials made their way to civilian production with this example being one of them.

Before I venture on, in the image it looks like this example comes as a full set but please note that neither the auction house or I would consider it a full set as the back page of the papers, where the important information is, has been ripped out. They have explicitly stated in the condition report this is the case.

Don’t let that detract you though, because in terms of correct parts, this is as good as it gets. The case is period correct, made by Central Bôites (CB) as denoted by the stamping on the caseback as supposed to the earlier Seamaster 300s that was made by Huguenin Frères. The ‘Big Triangle’ was released roughly around 1967, and this example with a serial from 1968 fits. Throughout its production run, Omega made a myriad of SM300 bezels, with different fonts, making these parts especially prone to chopping and changing. This one though, is original, with a correct rounded ‘3’, flat top ‘4’ and angled serif on the ‘1’. Furthermore, it is in very good nick, showing barely any damage. The only fault I can draw from this, which really, is no big deal in the grand scheme of things, is that while the crown is original, it is a replacement. Finally, it comes on its original flat-link 1039 bracelet, with correct 516 end-links and with a production stamp on the clasp dating it to the first quarter of 1968. All in all, this is an awesome collectors’ watch that proves that if you look hard enough, you can still find fantastic original examples. 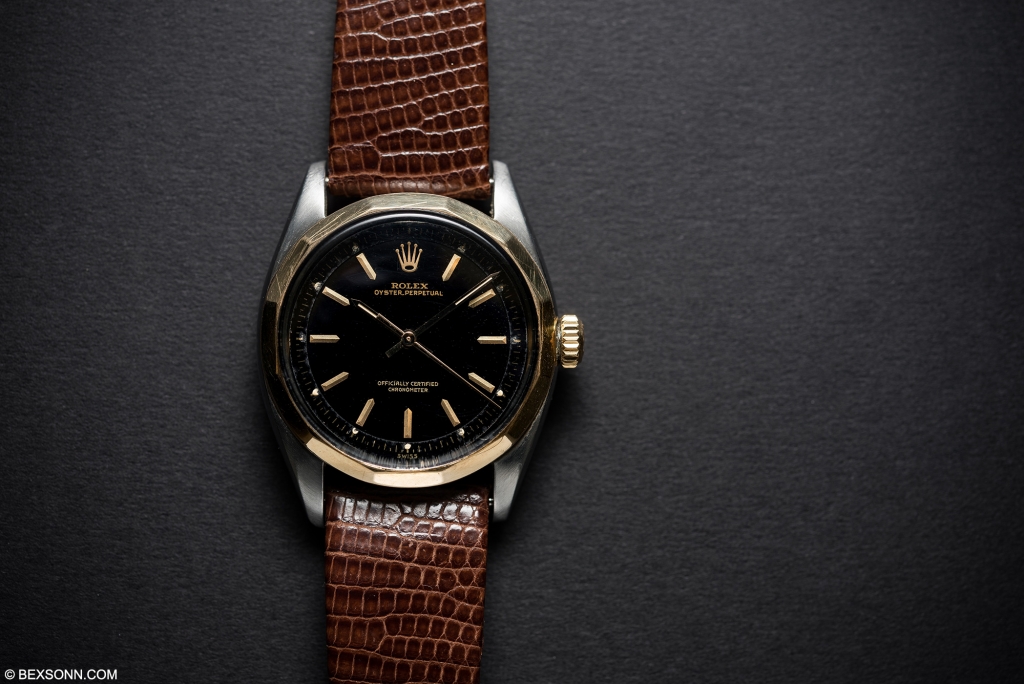 I chose this lot simply because of how unusual it is. While usually this would simply be a standard, though earlier variant of a Rolex Oyster Perpetual, when I first saw it, I had to take another look as I never knew these existed. This rare Ref. ‘6586’ is unique through its bezel- with it’s shape being angular instead of the usual bezel options of engine-turned, fluted or smooth.

There is not too much to say about this other than the fact that I do like the angular look a lot. This combined with the two-tone construction really makes for a watch that will stand out, and I don’t usually like two-tone. The overall condition looks good, with the bezel still retaining its angular features. Especially with sharp angles, with watches such as the Royal Oak, a poor polish can easily ruin the entire watch. The black gilt dial has no tarnishing, but does have some slight lume loss around the top right portion. I think this would be a fantastic dress watch that would certainly separate yourself from the rest. 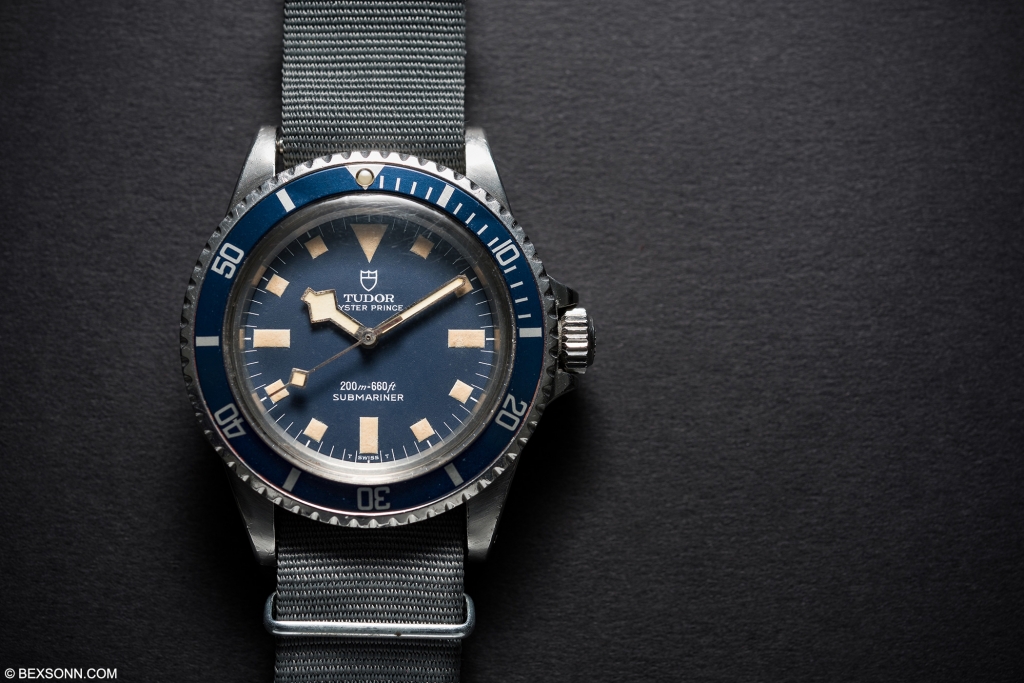 I am a big fan of military timepieces though at the pinnacle of collecting mil-pieces is the Rolex Submariner, there is also a Tudor Submariner that was issued to the Marine Nationale (French Navy), that has recently started to creep up in prices. No longer is vintage Tudor seen as Rolex’s inferior little sister, but instead the market is strong and there are collectors devoted to the brand. The relationship between Tudor and the French Marine Nationale began in the late 50s and is perhaps one of the more enduring relationships between a brand and the military, with pieces produced until the 80s. 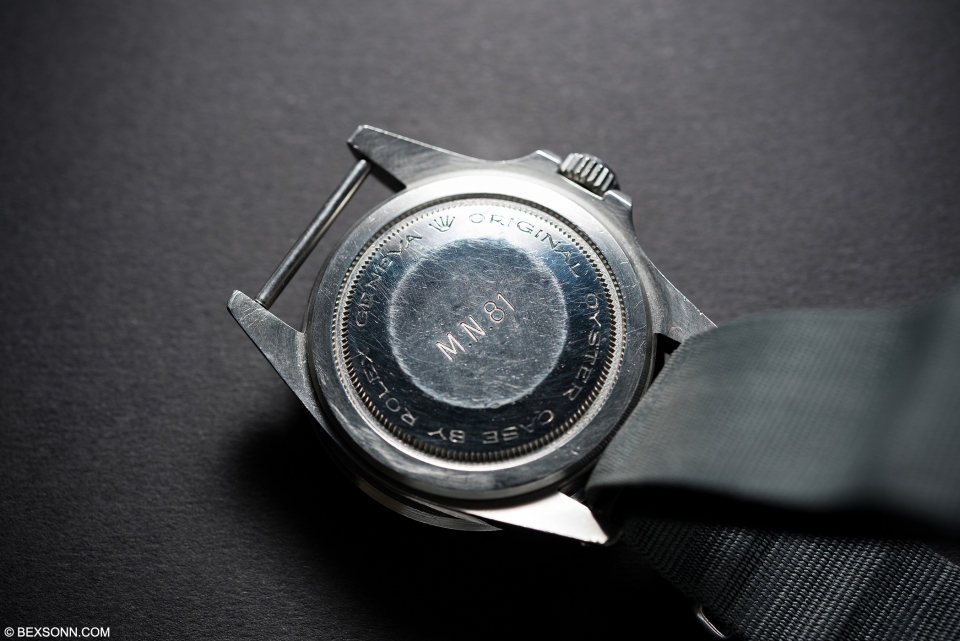 This example is a later variant, as denoted by the case back ‘M.N 81’, indicating it was delivered in 1981. This Snowflake Submariner has a dial that is in great condition, with no bubbling visible and a fantastic patina on the dial that matches the hands. The fat font bezel is in good nick and over the years has developed a nice warmth to it. The case itself is not bad, having been polished before but retaining its thickness. One thing when looking to buy a MN Tudor Submariner is of course being wary of fakes and one way of being sure is if the watch comes with decommissioning papers. These are hard to come by and while it is usually a good sign, there was an instance where blank decommission papers appeared online a couple of years back, raising worries that this is not a sure way. The other way, is by checking the Marine Nationale’s watchmakers’ ledger book, which was bought by a collector a while back and who has offered to cross check any Tudor MN’s serial number for a fee. While this Tudor doesn’t come with decommissioning papers, I have been told by Watches of Knightsbridge that it has been checked and it is indeed an original example. The estimate is fairly low in my opinion and it will be interesting to see how it fares this weekend. 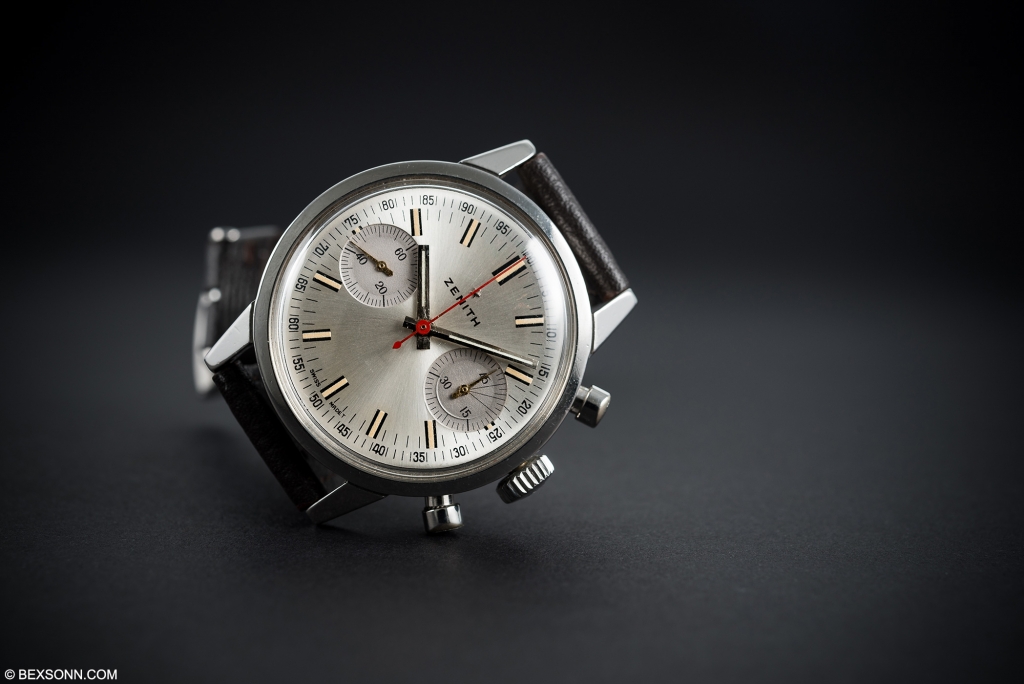 Another unusual and interesting watch that I am a big fan of is this Zenith A 279, both because of its aesthetics and the context in which it was produced. Aesthetically, this watch is fairly unusual for Zenith of that era, largely due to its wide-boy style luminous markers. The silver sunburst dial with the creamy yellow lumes makes for a striking look, yet still maintaining the simplicity of a two-register chronograph.

The feeling I get from this watch, is that it looks like a typical 60s/70s style chronograph, housing perhaps a Landeron 148 or Valjoux 77, but no. This Zenith A279 houses the famous 146D movement, a fantastic in-house manually wound column wheel movement that is a joy to use. Yeah, amazing. The round pump pushers are buttery soft and the calibre is well-finished.

What is more interesting about this watch, as I mentioned, is the context in which it was produced. Released in a transitional time when the El Primero movement was taking centre stage, with the race to create and automatic chronograph movement akin to being the first man on the moon, this watch was seen by Zenith as an afterthought. While the movement is pure quality, the case is slightly less so, which explains my earlier inclinations that it looks like a V77 or L48 watch.

That being said, don’t be disheartened by that, because that is exactly what I like so much about this piece. A kind of neither here nor there piece, this is exactly the kind of oddity collectors love. Do note that the chronograph seconds hand has been replaced, but don’t let that faze you, sourcing another is nothing difficult compared to the joy you’d get from this awesome 37mm chronograph. 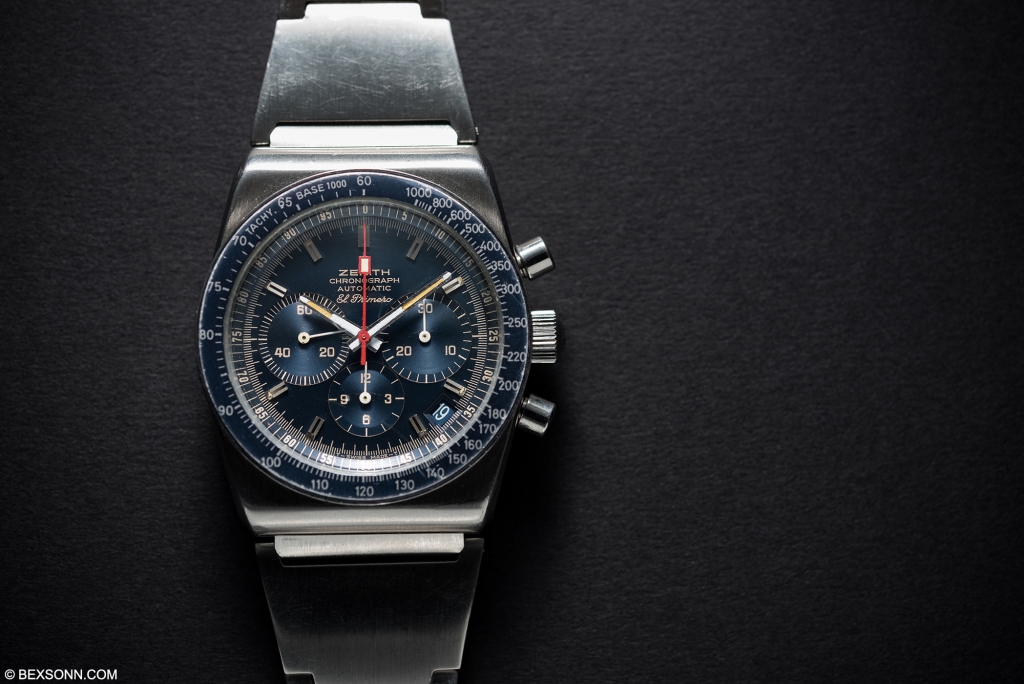 Speaking of the El Primero movement, is my final pick- a Zenith El Primero Ref. 01.0140.415. It is a later model, produced in 1972 and genuinely rare, with only 500 pieces ever made. General early El Primero numbers were very low, but this one particularly so. Considering they made 2500-3500 examples of the A 386, the most coveted model of them all, this is significantly harder to come by.

My theory is that the aesthetics of this is not as accessible as the traditionally shaped A386 but that blue dial and bezel combination is fantastic to look at. It comes with its original Zenith bracelet, which is this large hunk of metal and is certainly 70’s design at its best. The overall condition of this example is excellent, with no tarnishing visible on the dial and an impeccable bezel. Though this is a later reference, it comes with the same Defy case as the A781-782-783-7817, but instead with a fixed tachymeter on the bezel.

The El Primero movement is legendary and I feel the model line is under-appreciated in many ways. It is a high-beat, integrated movement, and while it is debatable who produced the first automatic chronograph movement, with the brands in contention, there is no doubt that Zenith would place in there somewhere. Still produced today, and largely unaltered, it shows the quality of it when it was produced. Furthermore, it is also a movement that is relatively exclusive, with only one other brand using it: Rolex, for the Daytona 16520. Some of the most iconic designs came out of Zenith and one that holds a lasting impression of an era, with no apologies to make. Alongside the history and the love-it or hate-it appeal, the El Primero has me thinking that this is a watch that will do very well in the coming years. With the rarity of these pieces, it is hard to say how this will go, and that my friends is the beauty of the auction.

The Watches of Knightsbridge auction will take place on the 19th November 2016 at their Headquarters in Knightsbridge, make sure you visit the official website for this month’s full catalogue.