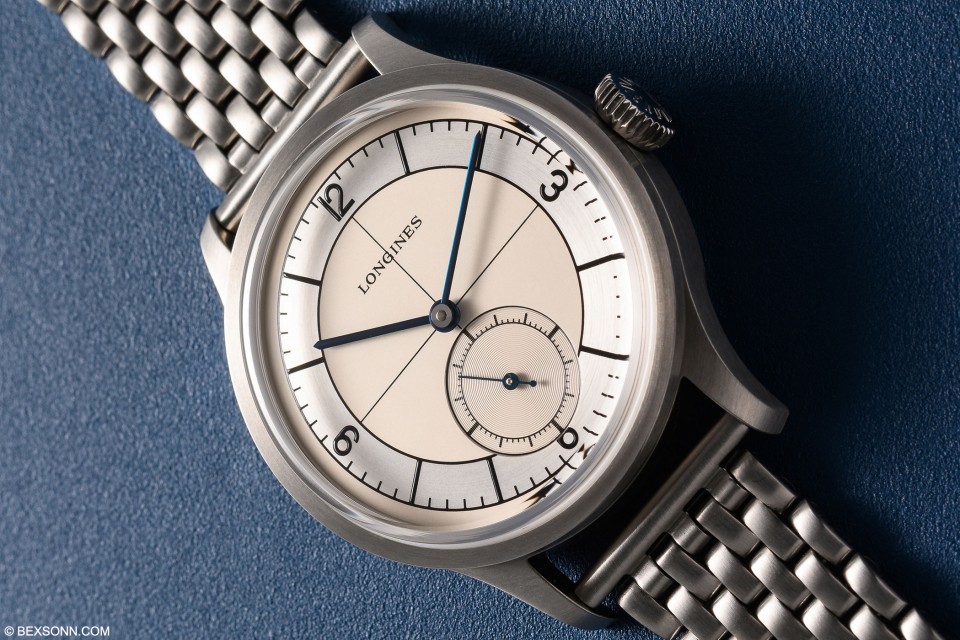 Longines appear to be making a lot of the right choices at this moment in time, when it comes to their watch design inspirations and this is a theme they’ve continued with this year. Some will, and rightly so, argue that they are no longer the company they once used to be but for the majority of watch buyers out there, Longines represents a real opportunity to buy a luxury watch at reasonable price point and this is perhaps more pertinent. However, what I think Longines are getting so right at this moment in time is creating watches that collectors and enthusiast not only want but also can actually afford.

Towards the end of last year Longines introduced the Heritage Classic; a watch based on a 1930s sector dial design taken from their extensive back catalogue and while it had a few critics at the time, overall it was very well received. I guess you could say that Longines’ abundant back catalogue of historic timepieces does allow them to reissue a myriad of watches that strikes a chord with collectors and enthusiasts alike.

The design of the Heritage Classic evokes the same spirit as its 1930s inspiration. The satin brushed case is a streamline affair, with a three part case. The middle section of the case has been satin brushed and features clean and sharp facets, with a matching large bezel. However, the snap on case back is polished and sports the old Longines logo. That said, it would’ve been nice to see a screw down case back, something more akin to that of the Tre Tacche’s from the same 1930-40s era – this would’ve been a nice touch. Nonetheless, Longines have used an old-style logo large crown, which balances nicely with the 38.5mm case.

Beneath the anti-reflective box-style sapphire crystal is the gorgeous and unfussy sector dial. The two-tone silver opaline dial is characterised into three distinct sections; on the satin-finished hour ring of the dial sits the Arabic numerals at 3, 6, 9 and 12 o’clock separated by sectors. If you look very closely, you’ll see the black ink used on this portion of the dial it is ever so slightly raised – adding some hidden detail. This section is framed by a thin outer silver opaline edge that bears the inscription “SWISS MADE” at 6 o’clock. The final section of the dial is the silver opaline centre, which features a crosshair and a small subsidiary running seconds at 6 o’clock, with sailed texture. The classical look of this Longines is emphasised by fine blued-steel hands, which gives it a vintage look and feel.

Most reissue Longines tend to include a date window, however, in-keeping with the original design of its 1930s inspiration, the Heritage Classic is free from this impediment and this is all down to the movement. The Heritage Classic is driven by a new exclusive movement; the calibre L893.5, which features a silicon balance spring. This movement is self-winding and though it would’ve been nice to see Longines make it a manual wound movement, it doesn’t detract from the watches classic feel. The sans date nature of this new movement specifically developed for the Heritage Classic, is what enables the small seconds display to be located under the central axis.

Completing the overall vintage-style of the Heritage Classic is a light blue or semi-matte black leather strap with beige stitching and in addition to this. Each example is also supplied with a denim-effect leather NATO strap and the tools required to change the strap, should you feel the need. Though as you can see my personal piece shown in the images has satin brushed beads of rice bracelet attached to it, which I think adds an even more vintage quality to the watch.

Longines have a long history of making some of the most aesthetically and technically pleasing watches in my humble opinion, so when I first laid eyes on the new sector dial watch, I was rather taken aback. This new piece has the perfect mix of yesteryear and modernity of today. The inspiration of the case design comes from an era where these watches weren’t just mere time telling devices but actual tools and the simplicity in its design lends to its utilitarian purpose. The balance of the sector dial is pure genius, with not only contrasting tones but contrasting textures of smooth and brushed.

Though, it is important to point out that one may assume that reissuing a historical piece such as this is a rather easy feat and on top of this making it affordable too – it is anything but. Getting the balance of the case, dial and hands right, along with the right movement can be difficult in itself and often compromises have to be made to make sure it is affordable. These are just some of the many things that have to be taken into consideration and these choices can result in an end product that misses the mark completely. However, this is something that Longines were able to mitigate with the Heritage Classic.

The overall execution of the Heritage Classic is brilliant, the tone-two nature of the sector dial coupled with the thin blued-hands is a masterstroke and the 38.5mm size of the case is just right; it’s neither too small nor too large. The balance of the dial affords ease of legibility, which makes reading the time a rather simple affair.

That said, with all the glowing praise if there is anything that kind of sticks out in my humble opinion that I would change it would be the way in which the number 6 has been cut off by the small seconds sub dial. Though not a huge issue, I do think had it been closer in layout to the original it wouldn’t have been so noticeable. Also, as already mentioned, perhaps the only other thing I would’ve like to have seen on the Heritage Classic is a screw-down case back, which I believe would’ve given it greater waterproofness than the 30 metres it has but other than that the watch is pretty much close to perfect.

Overall, there is so much more to love about the Heritage Classic than there is to loathe. I could be wrong, but I think it’s one of the best looking Heritage timepieces made to date in my opinion, which says quite a bit – considering some of the models Longines have come out with over the past few years.

The Longines Heritage Classic “Sector” (L2.828.4.73.0) comes on either a black or light blue strap, with an additional denim-effect leather NATO and retails for £1,760. For more information on this watch, visit the Longines website. Note: in case you’re wondering where to purchase the beads of rice bracelet I’ve attached to mine, use this link.