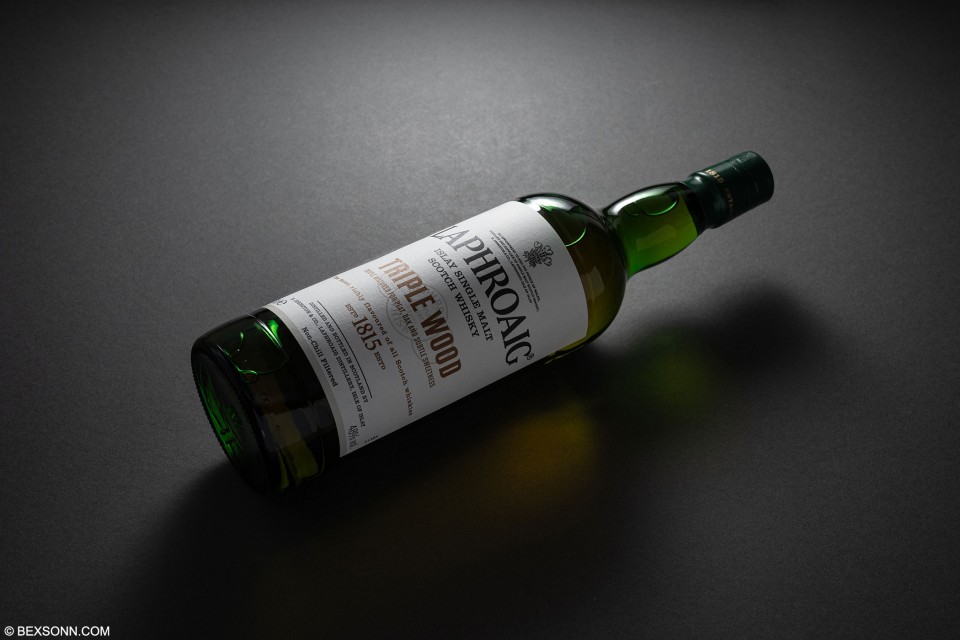 Laphroaig is a rather curious whisky, you either love it or loathe it. Founded in 1815, in Port Ellen, Argyll, Isle of Islay, Laphroaig are famed for their peated Scotch whisky, just like most of their fellow Island Scotch distillers. Laphroaig is known for being sweet, spicy and peaty, and this is the epitome of Islay Scotch whisky. Triple Wood is an extension of the Quarter Cask expression and is special for its triple maturation, which creates a unique blend of our signature peat-smoked liquid with softer notes of fruit and spices. First maturing in ex-bourbon barrels, second maturation in quarter casks and then a third maturation in European oak casks previously used for Oloroso sherry.

On the nose: you’ll get a lovely warm aroma of golden syrup, raisins, pear drops and vanilla. These initial notes are followed by notes of tropical nature, peat, brown sugar and salty caramel. Notes of cinnamon, star anise and liquorice start to emerge as well as toasted oats. Completing the nose are notes of crips red apples orange zest and green herbs. On the palate: notes of pear drops, raisins and vanilla are ever-present with a tonne of peat and salty caramel. Notes of fudge, mixed spices, star anise, cracked black pepper and fennel seeds start to appear, alongside mint and brown sugar. Rounding-off the palate are notes of charcoal, oatmeal, green herbs, espresso and a grassy note. The finish: long and spicy, with lingering liquorice, smoky peat and mint.

The verdict: The Laphroiag Triple Wood was, much to my surprise, a drop that I didn’t expect to tickle my nose and palate but I was completely wrong. The nose to palate is full of so much depth with notes I didn’t expect at all, with notes of peat throughout but never overbearing, alongside sweet notes. This is a dram that is as effortlessly brilliant and well balanced. With an ABV of 48%, in my opinion, you don’t really need to add any water. However, if you require water then only add a small amount but to experience the plethora of notes on offer, I’d suggest leaving the dram to breathe for approximately 3 – 5 minutes before indulging.