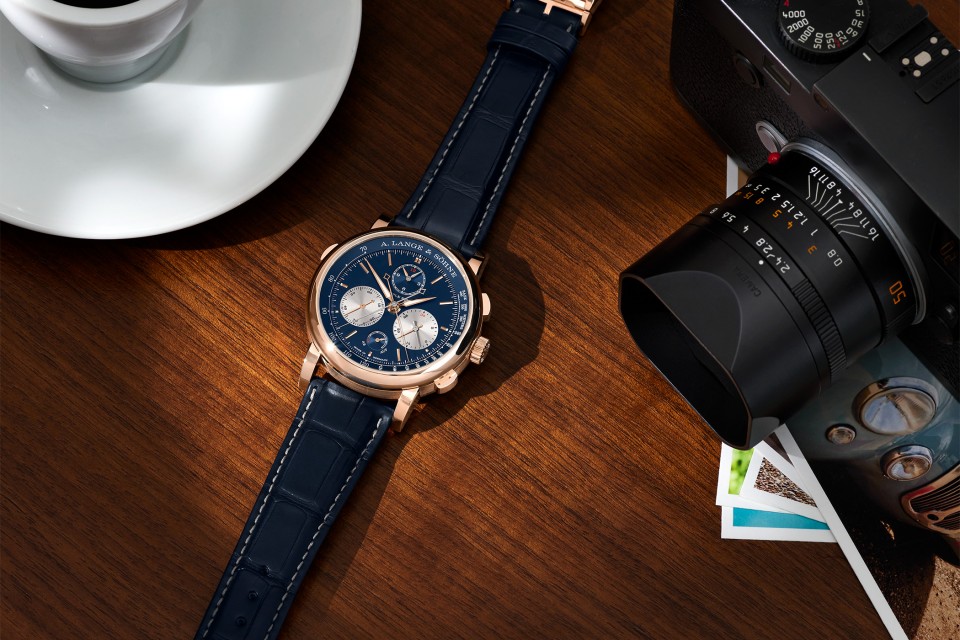 The Lange novelties of 2021 seemed to have passed us by but of course we couldn’t let this new timepiece pass us by. Lange have a habit of creating some of the most technical and eye-pleasing chronographs in their catalogue and one that caused a few raised eyebrows last time has been somewhat refreshed. Of course, this is no ordinary chronograph, it is a Triple-Split Flyback chronograph but just what does this mean? A few years ago, Lange were gracious enough to loan us the Double-Split Flyback chronograph and we were impressed, and while many will question its use, we thought we’d get our hands on it. Fast-forward to 2018 and Lange introduced an even more complicated chronograph into their model line-up – which brings us to 2021 and this refreshed Triple-Split Flyback.

Back in 2004 Lange introduced the Double-Split Flyback and at that time as Lange put it themselves it was a “watch in the watch”, when they introduced it. The principle of the rattrapante sweep-seconds hand has been extended to the jumping minute counter. This meant that for the first time ever, comparative lap measurements of up to 30 minutes – in Formula 1 races, to name but one example – were now possible in a classic, purely mechanical wristwatch. The Triple-Split further improved upon this, making it the first mechanical split-seconds chronograph in the world that allows multi-hour comparable time measurements. Additional rattrapante hands on the minute and hour totalisers make it possible to stop lap and reference times of events that last as long as twelve hours but just where and why would this be useful?

On 17 July 2016, German triathlete Jan Frodeno achieved a new world record for the triathlon long distance. In an amazing seven hours, 35 minutes and 39 seconds, he mastered the combination of swimming 3.8 kilometres, cycling 180 kilometres and running 42.2 kilometres. It took 20 minutes and 44 seconds longer for the runner-up, Joe Skipper of Britain, to reach the finish line. Among all mechanical rattrapante chronographs, only the Triple-Split would have been able to precisely record the times of the winner and the second-placed competitor in hours, minutes and seconds. 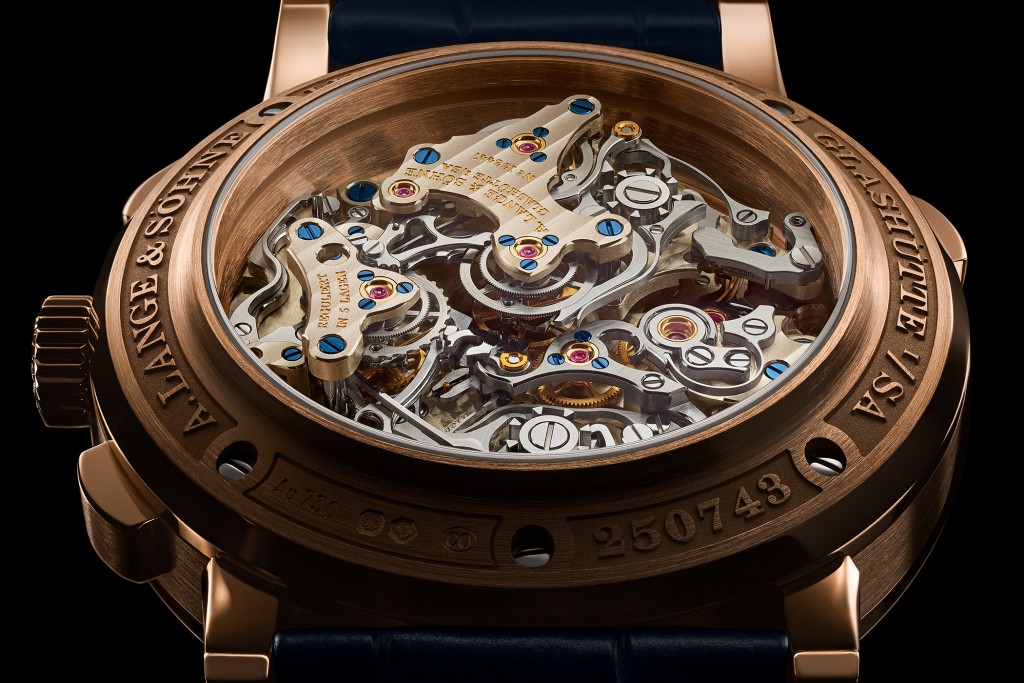 Turning a Lange chronograph over to view the movement is always a feast for the eyes and this exquisite piece is no different, so we’ll start here. The most astounding thing about this manual-wound calibre L132.1 movement must be its depth. It is a 3D mechanical architectural work of art. Crafted to the highest Lange quality standards, decorated and assembled by hand the L132.1 is a sight to behold. The calibre L132.1 movement is made up of some 567 components and when fully wound it will provide up to 55 hours of power reserve. Like all Lange movements the L132.1 features a beautifully hand engraved balance cock, though this one is a little hard to see, as it is partially hidden by some of the movements other components. 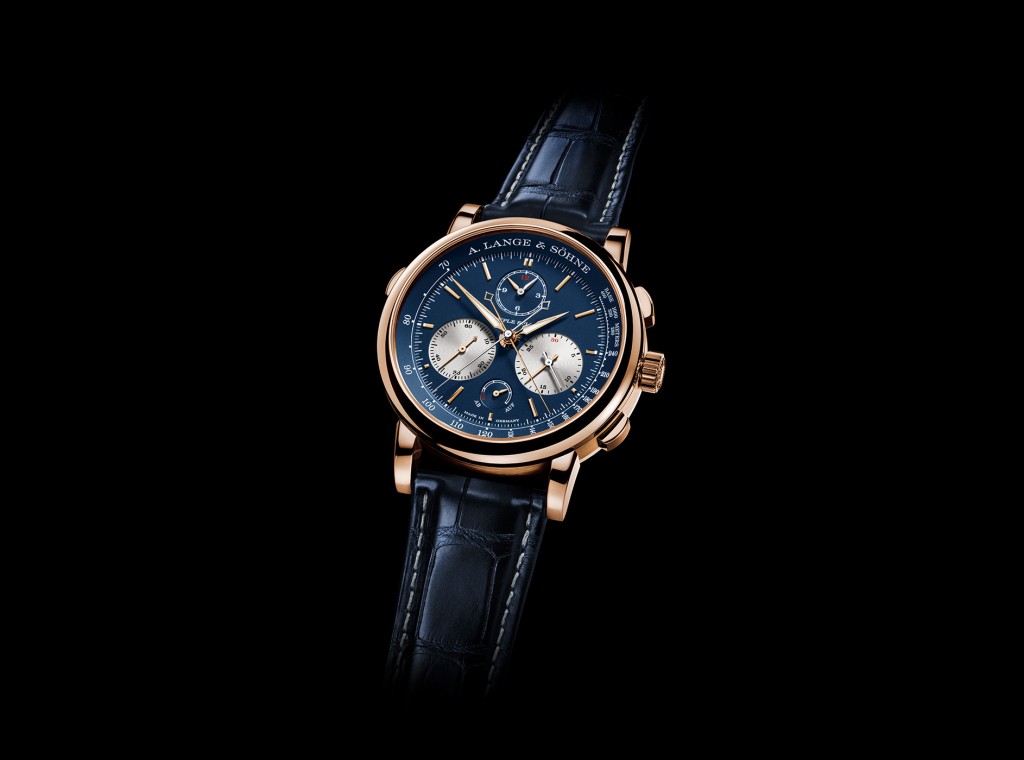 The dial is a deep blue and silver affair and makes use of ingot-style baton markers, though I do wonder if roman numerals would have added an extra element of sophistication. Looking at the centre of dial you’ll notice it sits below the inclined dial flange, which sports the 1000 base tachymetre scale and the inscription of A. Lange & Söhne is arched across the top. At 6 o’clock is the power reserve, which is well placed and balances out the dial nicely. Your eyes are gently drawn to the large register sub dials, which sit below the centre axis of the dial. 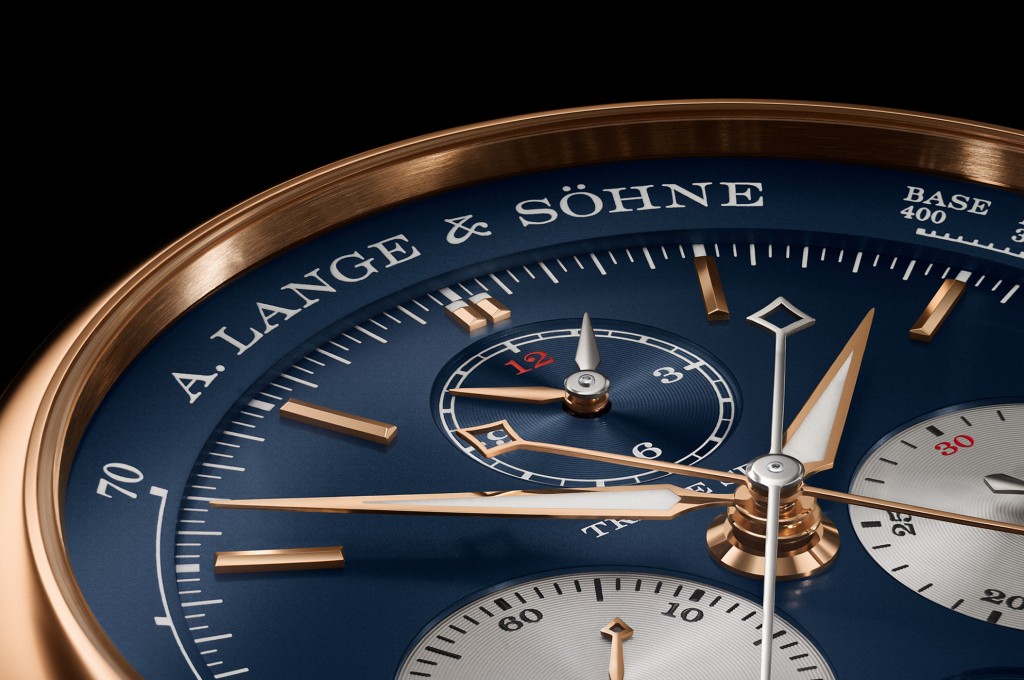 At 8 o’clock is the continuous seconds sub dial and at 4 o’clock is the recorded 30 minutes and split-minutes sub dial, and up at 12 o’clock is the split-hours counter. At the centre are split seconds, differentiated by white-gold and yellow-gold hands. Luminous alpha hands indicate the hours and minutes, lending a very industrious yet sophisticated look and feel to the dial. 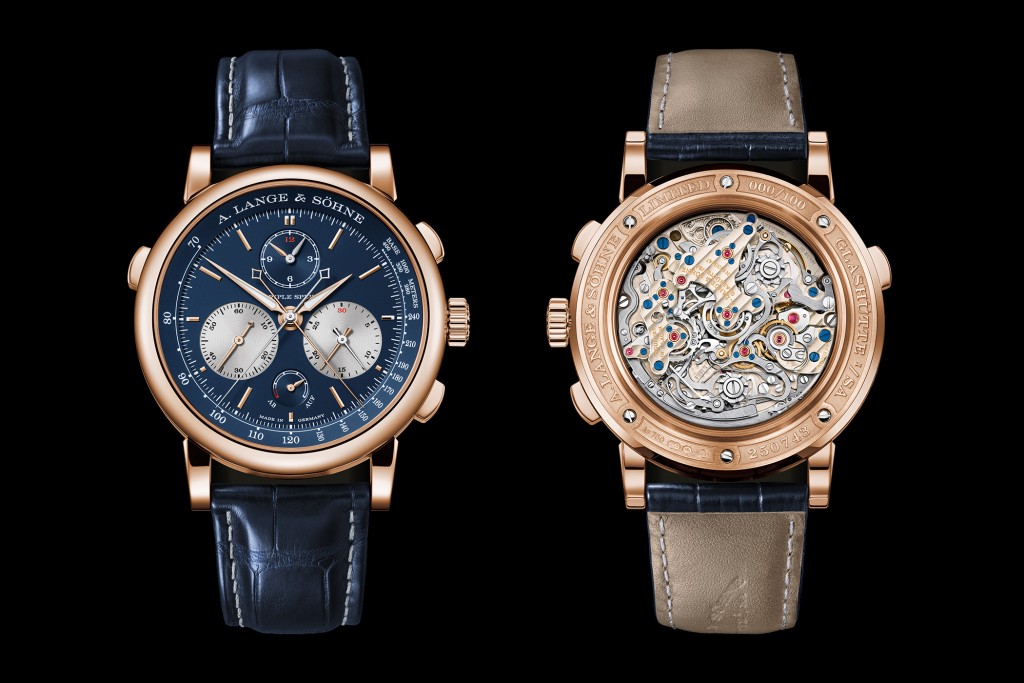 As for the case, it is big in my humble opinion, perhaps a little bigger than I am comfortable with. The case dimensions are 43.2 x 15.3mm, no different from the double-split but this is considerably larger than one would expect but you are getting a lot of watch in this package. The case is classic Lange: no fuss, simple but functional. Made in 18-carat pink-gold, all angles and curves have been polished to a mirror shine. One thing I’ve always loved about Lange’s timepieces are the way the lugs meet the case, and it is no different in this case; it is amazing how small details like this make all the difference to the overall look and feel of a timepiece. 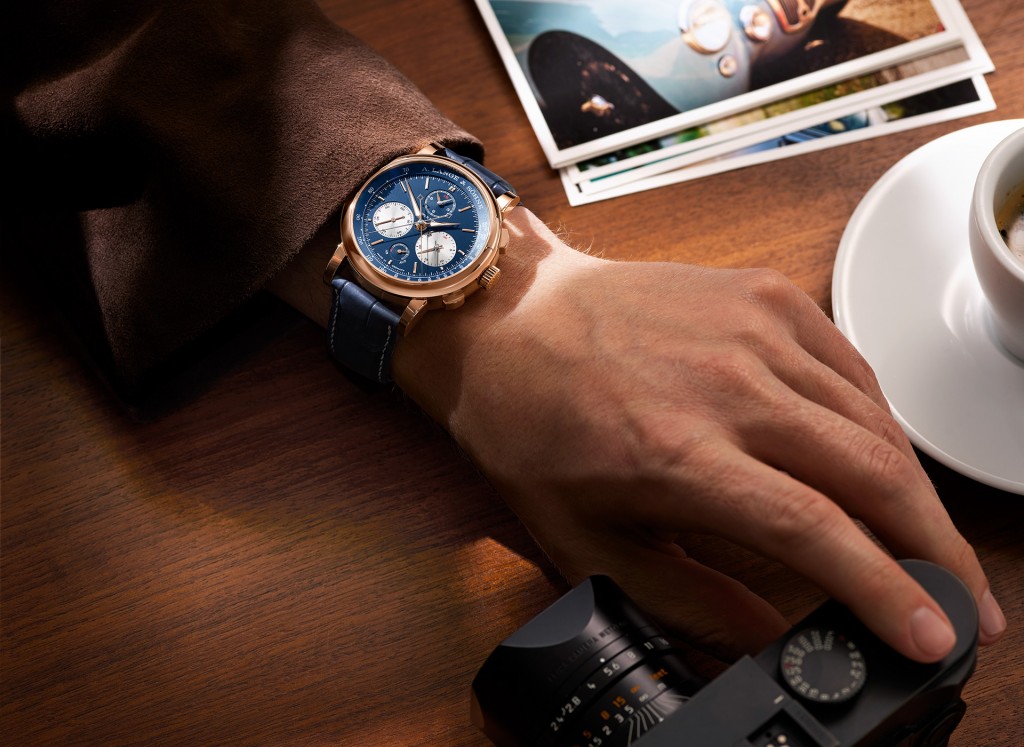 Like all of Lange’s timepieces the Triple-Split Flyback makes use of rectangular push pieces, located at 2, 4 and one between 9 and 10 o’clock on the case band. The case features a large, fluted crown that is the perfect size and has a gratifying feel about it, which is practical when considered it will get used quite often. Covering the dial is anti-reflective sapphire crystal and the same is used on the exhibition case back, which is secured using 6 screws. The case is secured to the wrist by a hand-stitched crocodile strap with solid white gold Lange deployant buckle.