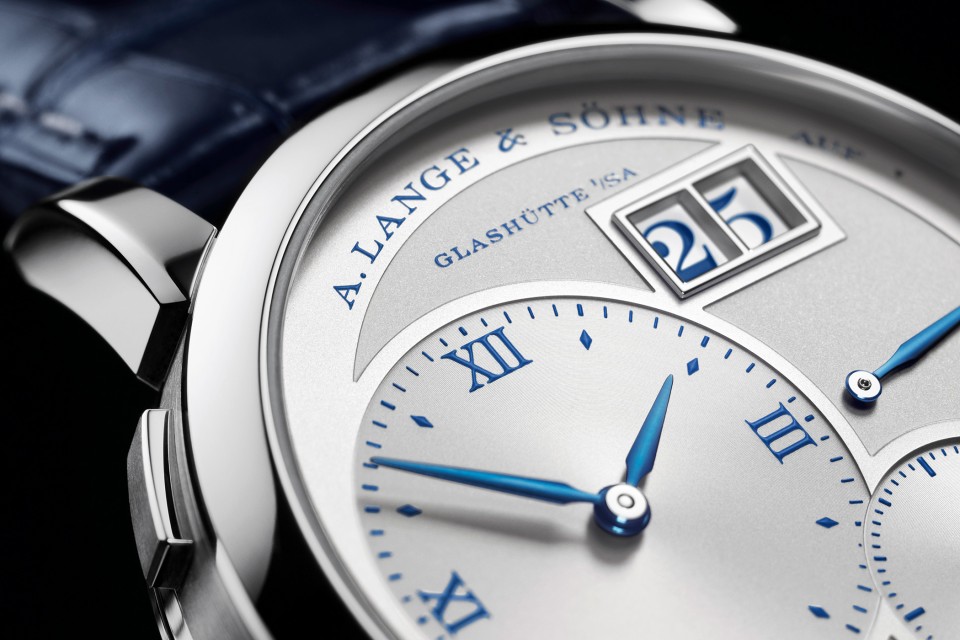 Five years ago, we posted a Lange 1 20th Anniversary piece that in featured a gorgeous guillouche dial. 5-years on, Lange are marking the 25th Anniversary of the Lange 1 with a jubilee edition. As we all know, the Lange 1 was the first watch from the A. Lange & Söhne’s resurrection back in 1994. The Lange 1 has been something of an icon for Lange and so it’s only right that it is of course celebrated. As such, the 25th Anniversary Lange 1 will be made exclusively in white-gold and limited to 250 pieces, featuring a an argenté dial and blue accents; a fitting timepiece for the occasion.

In 1990, Ferdinand A. Lange’s great-grandson, Walter Lange had the courage to relaunch the brand. Today, Lange crafts only a few thousand wristwatches in gold or platinum per year, though there are a very small handful of pieces that have been created in stainless steel. All Lange timepieces house exclusively proprietary movements that are lavishly decorated and assembled by hand. One of Lange’s biggest successes is the LANGE 1 with the first outsized date in a regularly produced wristwatch. The Lange 1 was introduced at the presentation of A. Lange & Söhne’s first wristwatch collection in Dresden on 24 October 1994, along with its outsized date window, striking design and dial layout, it became the face of the brand and the benchmark for many further developments.

This limited Lange 1 will feature an argenté-coloured dial in solid-silver adorned with printed deep-blue numerals, hour markers and dial text which create a striking contrast. As this is just a time only Lange 1 the dial layout is pretty much routine with an outsized date window at 1:30 – which also features blue numerals – hours and minutes at 9 o’clock, a seconds subsidiary dial with stop seconds at 5 o’clock and power reserve gauge at 3 o’clock. This simple layout affords no distractions, allowing you to admire the craftmanship of the dial and its differentiating textures.

This new Lange 1 signals the beginning of the “25th Anniversary” series: it is virtually unchanged since its inception 1994. Its movement is what reflects its technical evolution. The manually wound calibre L121.1 introduced in 2015 includes a precisely jumping outsize date display and a freely oscillating Lange balance spring. Paired with a large cam-poised balance, it assures superb rate accuracy. The opulently finished movement – as was the case with the first Lange 1 calibre L901.0 – features a twin mainspring barrel with a power reserve of 72 hours as well as typical Lange quality hallmarks. Noteworthy elements are the three-quarter plate made of untreated German silver, eight screwed gold chatons, and the hand-engraved balance cock. It exhibits a very special engraving: the outsize date with a “25” that symbolises the 25th anniversary. The manually executed lines of the new engraving pattern are blued for the first time and thus stand out with a particularly rich contrast.

The Lange 1 25th Anniversary is fashioned out of solid 18-carat white-gold and retains the usual dimensions of 35.8mm in diameter and 9.8mm in height. As mentioned, this piece is limited to 250 watches but also has another prominent feature that I’ve yet to mention: an engraved hinged cuvette crafted from solid white gold. The engraving depicts the Lange head- quarters that date back to 1873, the names of Walter Lange and Günter Blümlein, and a relief engraving of the inscription “25 YEARS LANGE 1”.