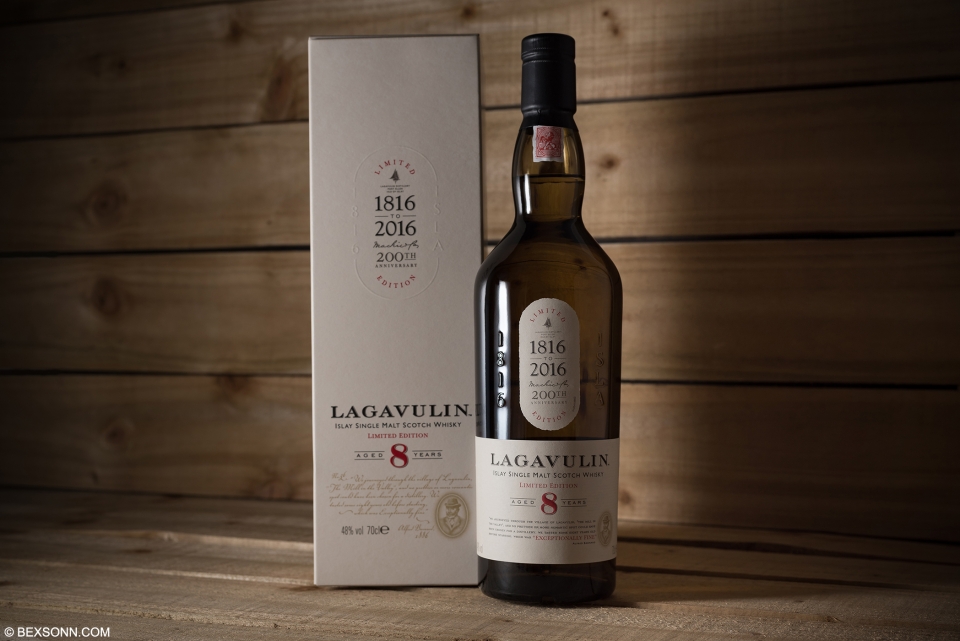 Last year a neighbouring Islay distillery celebrated their bicentenary, this year it’s Lagavulin’s turn. We’ve sampled quite a few drams from the Lagavulin distillery and have always been pleasantly surprised. This 8yo expression has been made in a limited edition of 20,000 bottles worldwide, in homage to Lagavulin’s timeless ability to produce exceptional malts. In celebration of the distillery’s 200th anniversary, Lagavulin have produced a reinterpretation of the 8 year old from the era of Alfred Barnard – who described this drop as “Exceptionally fine.”

On the nose: you get a very intense waft of sweet honey, closely followed by fresh green herbs, with hints of peat and iodine. There are notes of vanilla floating around in there, alongside butterscotch and strangely enough candy. Notes of lavender, oats and citrus zest start to emerge, with rosemary, beside hints of pears. Rounding off the nose are notes of dark chocolate, spices, cinnamon, oak and an undertone of earl grey tea. On the palate: that lovely sweet note of honey and green herbs are apparent, alongside marzipan and lovely nuttiness. It has quite a dry texture, however, the peat is more predominant on the palate. Notes of vanilla and tobacco start to emerge, as well as those notes of butterscotch, toasted oats, black pepper, cinnamon and liquorice. Completing the palate are notes of fresh pears, paprika and a dry smoke. The finish: long, sweet, peppery, with lingering oak and nuttiness.

The verdict: I’ve said it before and I’ll say it again, I really do appreciate a good peated Islay Scotch whisky and this dear readers is an insight to what used to be. The nose to palate take you on a rather interesting journey, with subtle hints of peat that are not too overbearing, alongside sweet notes of honey and the likes. This is a dram that is quite nicely balanced considering its tender years. With an ABV of 48%, in my opinion, you don’t really need to add any water. However, if you require water then only add a small amount but to experience the plethora of notes on offer I’d suggest leaving the dram to breathe for approximately 3 – 5 minutes before indulging.

This 200th anniversary, Lagavulin 8 Year Old Islay Single Malt Scotch Whisky can be found at any well-stocked whisky shop or online for approximately £55.