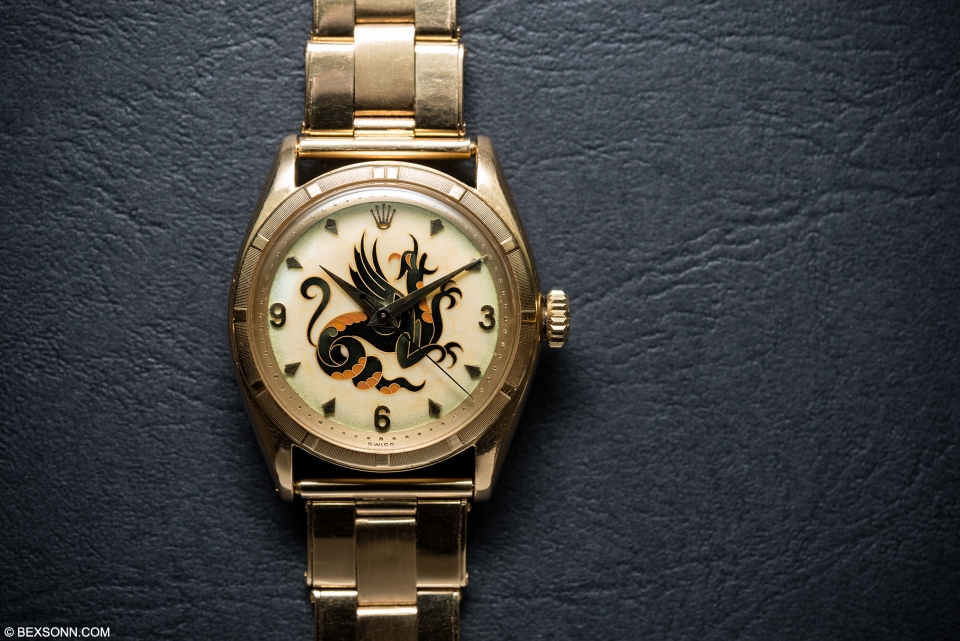 The term ‘unusual’, denotes that a given object is both not commonly occurring and remarkably interesting. The term ‘unusual’, is also something, when used appropriately, whets the imagination and desire of collectors of the highest calibre. At the very top of vintage watch collecting, the word ‘unusual’ is most apt, whether it be a blip in a given manufacture’s history, where a watch produced goes so against the grain of said philosophy or where a watch is produced in such small numbers that the very justification of it is questioned. Today, we are looking at a watch that challenges just that- “The Dragon” Rolex Ref. 6085 with a cloisonné enamel dial.

Offered for sale at the upcoming Phillips GWA 4 auction, this highly interesting piece sits strangely in the spectrum of collectors. Not understood by your average vintage watch lover, but ferociously desired at the top, I get it that cloisonné enamel dials with all of its colours would not be everyone’s cup of tea. For me, when I was first getting into watches not long ago, especially looking at auction catalogues, my eyes used to glaze over colourful cloisonné dials and straight to the Submariners and so forth. It was only once I started realising the craftsmanship and rarity of these pieces that my ears pricked up. 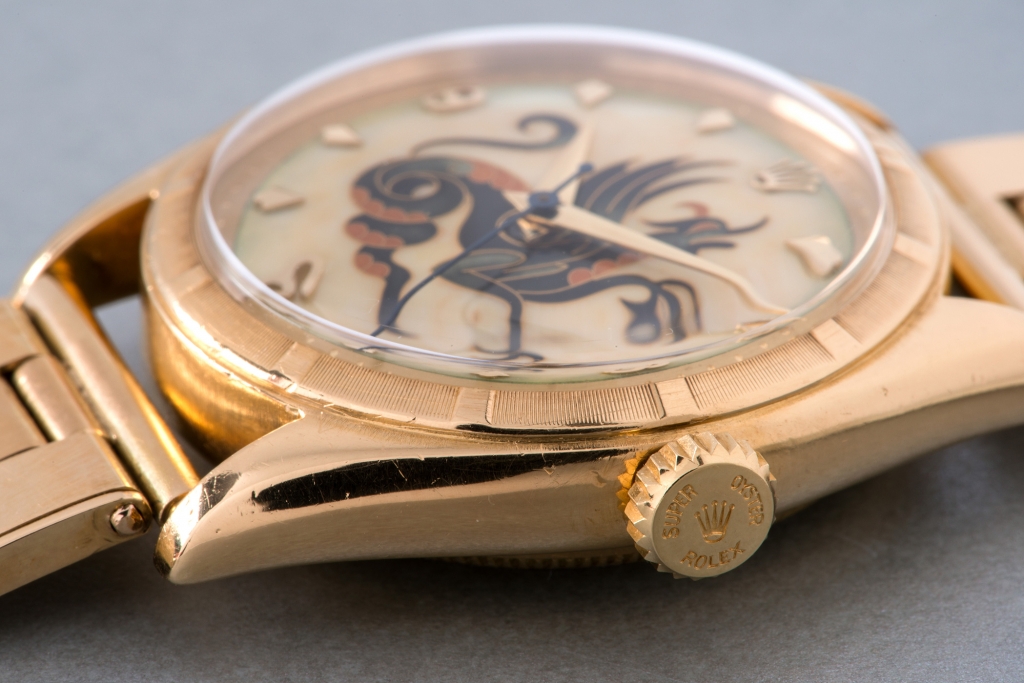 Objectively, Rolex cloisonné dials are some of the most coveted and desired Rolex out there. With a range of artworks depicted, from plain coloured dials to Viking ships, within this segment of watches, the rarest among them are the ones that depicts a dragon. This exactly, ladies and gentleman, with only five examples known in the market in this style, is about to hit the blocks in Geneva this month.

I would go as far as to say that this is my favourite variant of the five examples known. When one thinks of cloisonné enamel, it is of garish colours but this instead presents a more muted interpretation. With a predominantly black motif, and accented with tasteful bursts of orange, this is in my opinion, the most wearable Rolex cloisonné. The sober and restrained colour palette combined with the warm patina the yellow gold case has produced over the years makes for a strangely understated piece. Did I just say a cloisonné dialled watch was understated? Well, relatively.

While there are five known examples of Rolex cloisonné dials depicting the dragon motif, interestingly they’re are all on different references, making this Ref. 6085 quite possibly a unique piece. These are quite small at 33mm, but I do think at that size the balance achieved is just right. With a dial as elaborate as that, imagine if it was a 40mm watch instead; the elegance would be completely lost. 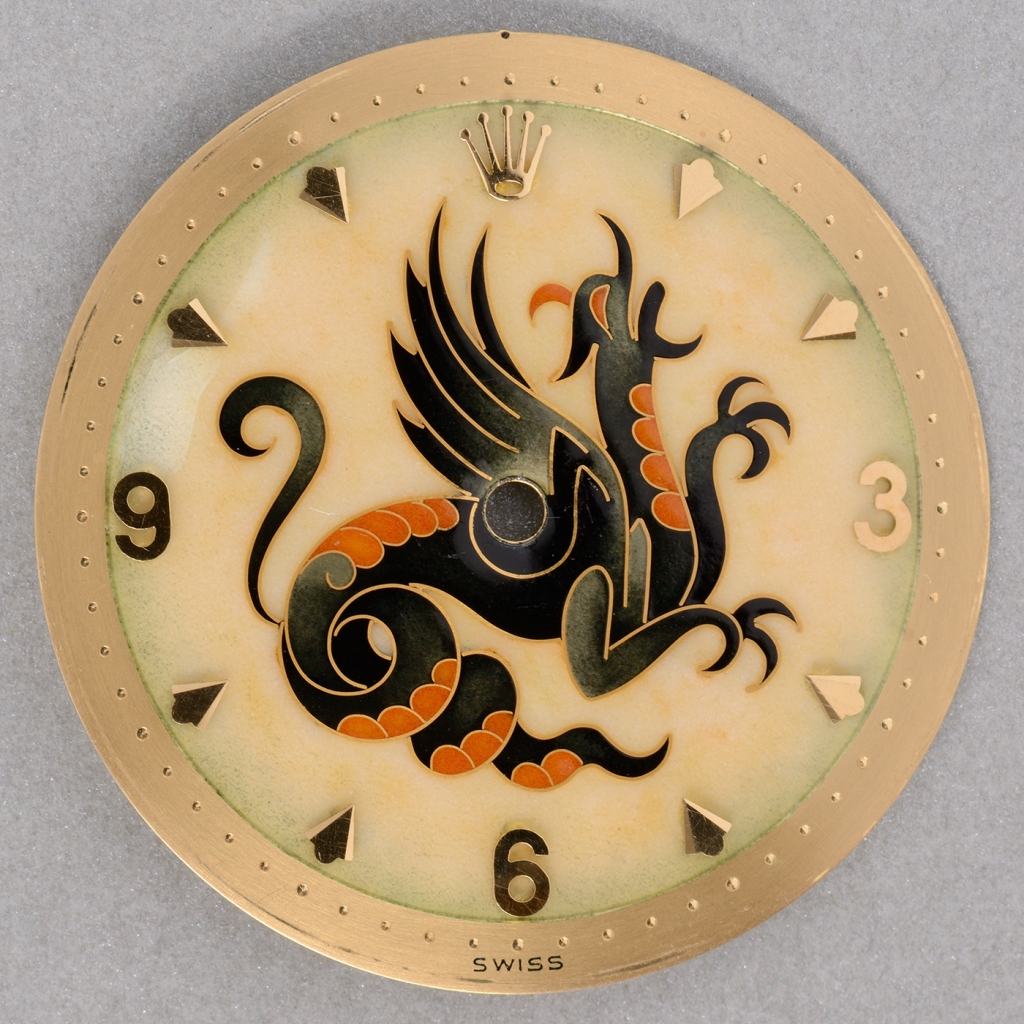 Largely produced in the 50s, these dials were made by the famous Stern Frères dial makers of Geneva for Rolex. This particular example was made in 1952 by a certain Mrs. Nelly Richards, with the numbers stamped on the back of the dial confirming its originality. The process of creating a cloisonné enamel dial is no easy task, especially one as intricate as this. Each dial has to be individually made by skilled craftsmen explaining the low numbers.

The process begins with the artist creating the desired outline of the motif by laying out thin wires of gold on the dial, creating partitions which is where the word ‘cloisonné’ comes from. From there, each part is filled with enamel powder of different colours and fired in an oven at around 1,000 degrees. At the end, it is hand polished and finished to make the dial flat. With a range of colours and depth of tones, the process is incredibly costly. Each colour has to be laid and fired in a kiln part by part, with a high possibility at each step that the dial cracks due to variances in heat and material. The rejection rate is extremely high. 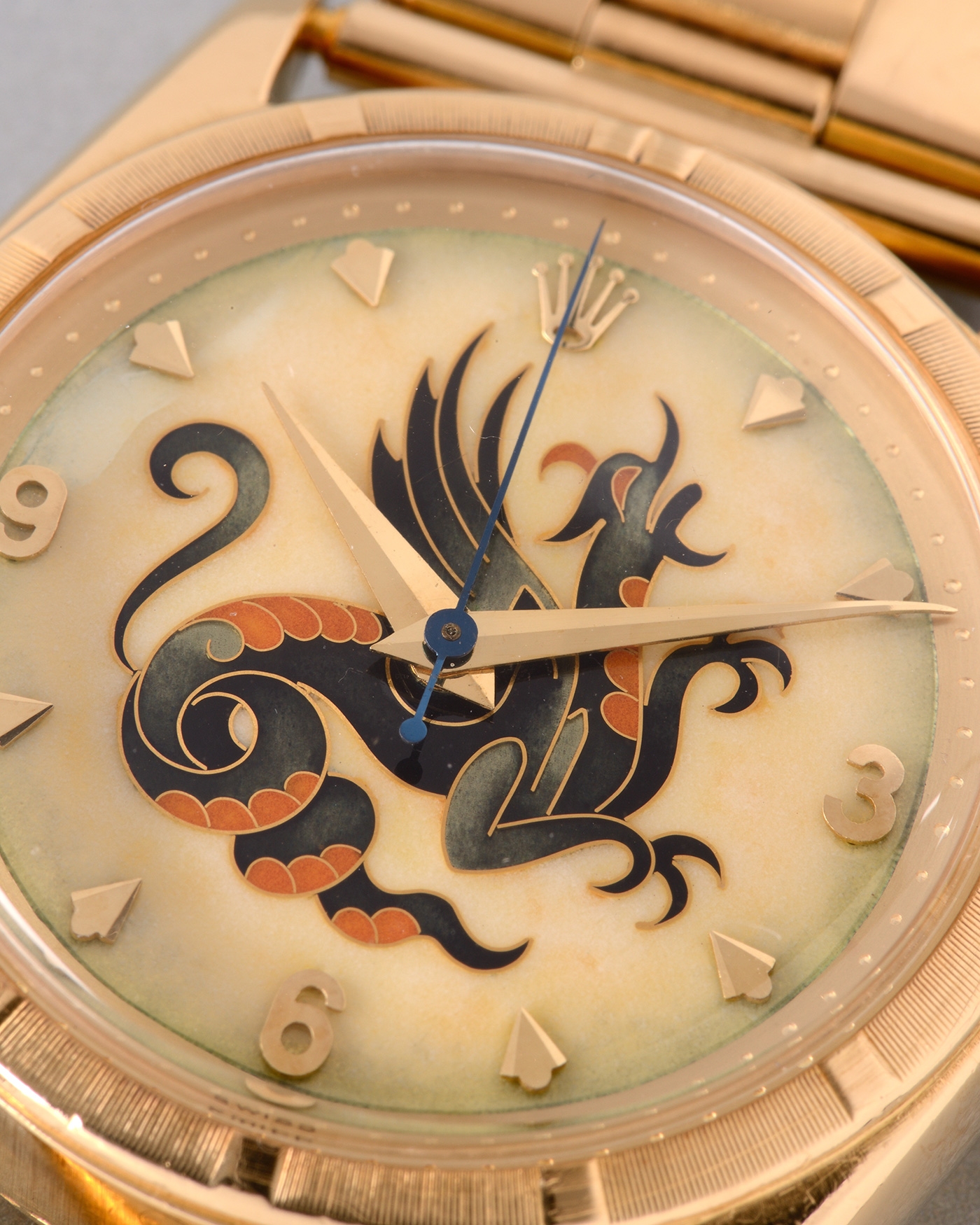 The beauty of enamel lies in its longevity, with colours produced 60 years ago still vibrant the day it was made. This ability to maintain its lustre, to me, makes it worth it; an artefact frozen in the history of time. It is once one understands this process of creating such a masterpiece, that you truly appreciate and realise how impressive this Rolex 6085 really is.

I suppose where the term ‘unusual’ comes into play, is how this watch is completely antithetical to the Rolex we know today. When one thinks of Rolex, we think of utility, ruggedness and on the other end, simple dress style watches. The Oyster Perpetual style of watch is underpinned by utility, with the ‘Oyster’ part denoting its waterproofness and the ‘Perpetual’ indicating that it is a self-winding mechanism. Most of the innovations that has come out of Rolex has been to address a need, such as trip-lock crowns, cyclops on a date wheel and multiple time zones. This is why you do not see a Rolex perpetual calendar, it’s just…unnecessary. Even then, a watch such as a Palledone or Stelline, that depicts a moonphase with a triple calendar, are so low in numbers for a reason. A moonphase? Too poetic and romantic. Who the hell needs that?

So when Rolex decided to work in conjunction with Stern Frères to make extremely decorative cloisonné enamel dials for their Oyster Perpetual cases, you get where we’re going with this. On top of that, the extremely low numbers due to both difficulties in producing and the madness of it all, what we get with this example, is a truly ‘unusual watch’.

For more lot information on The Phillips Geneva Watch Auction: Four that will take place on the weekend of the 12th & 13th of November at La Reserve Hotel, Geneva, visit the official Phillips Watches website to view the entire catalogue