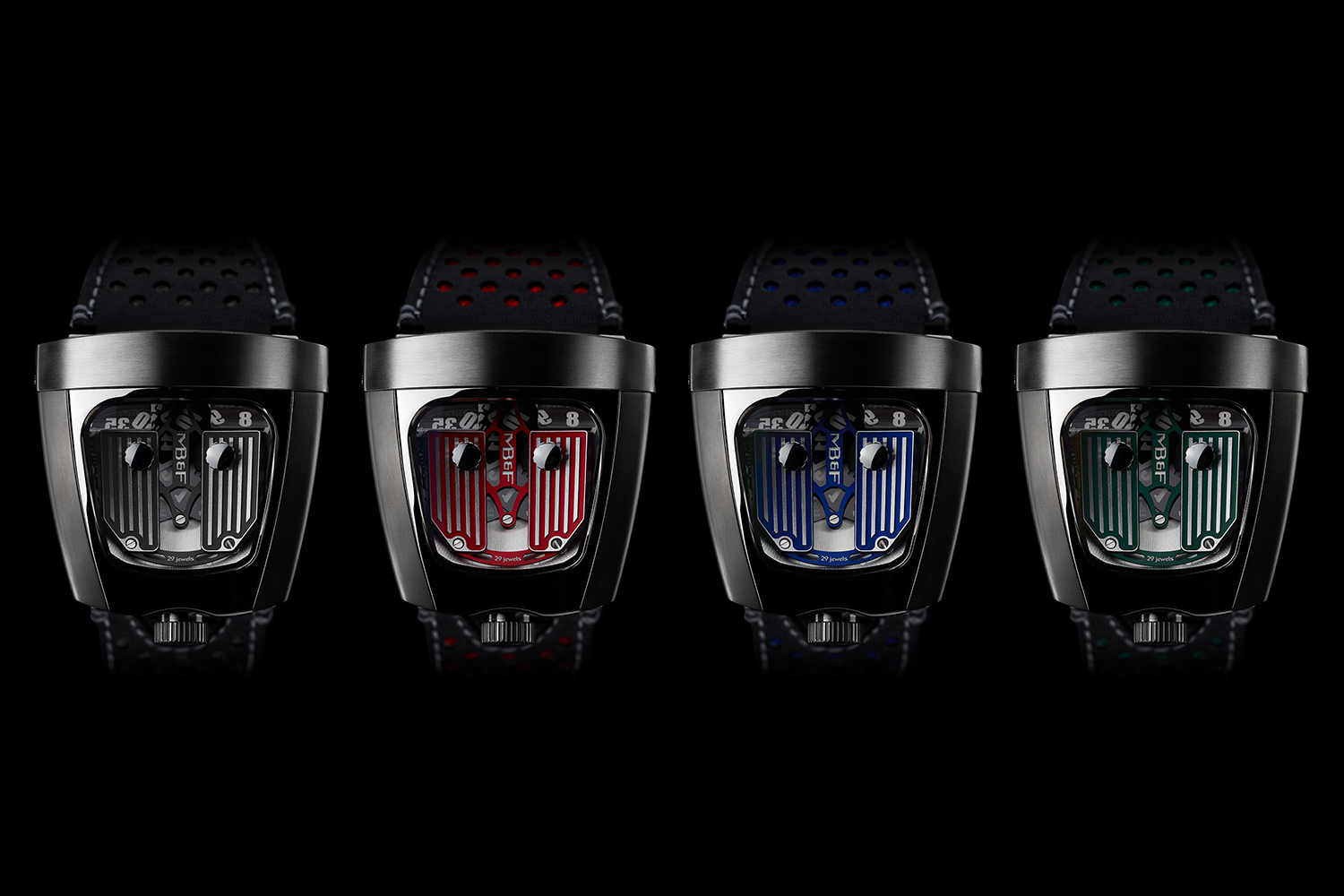 The MB&F Horological Machine X: “From the beginning, the idea for the HMX was to give something back to our friends: the collectors and supporters who were vital in enabling MB&F to reach its 10th anniversary.” 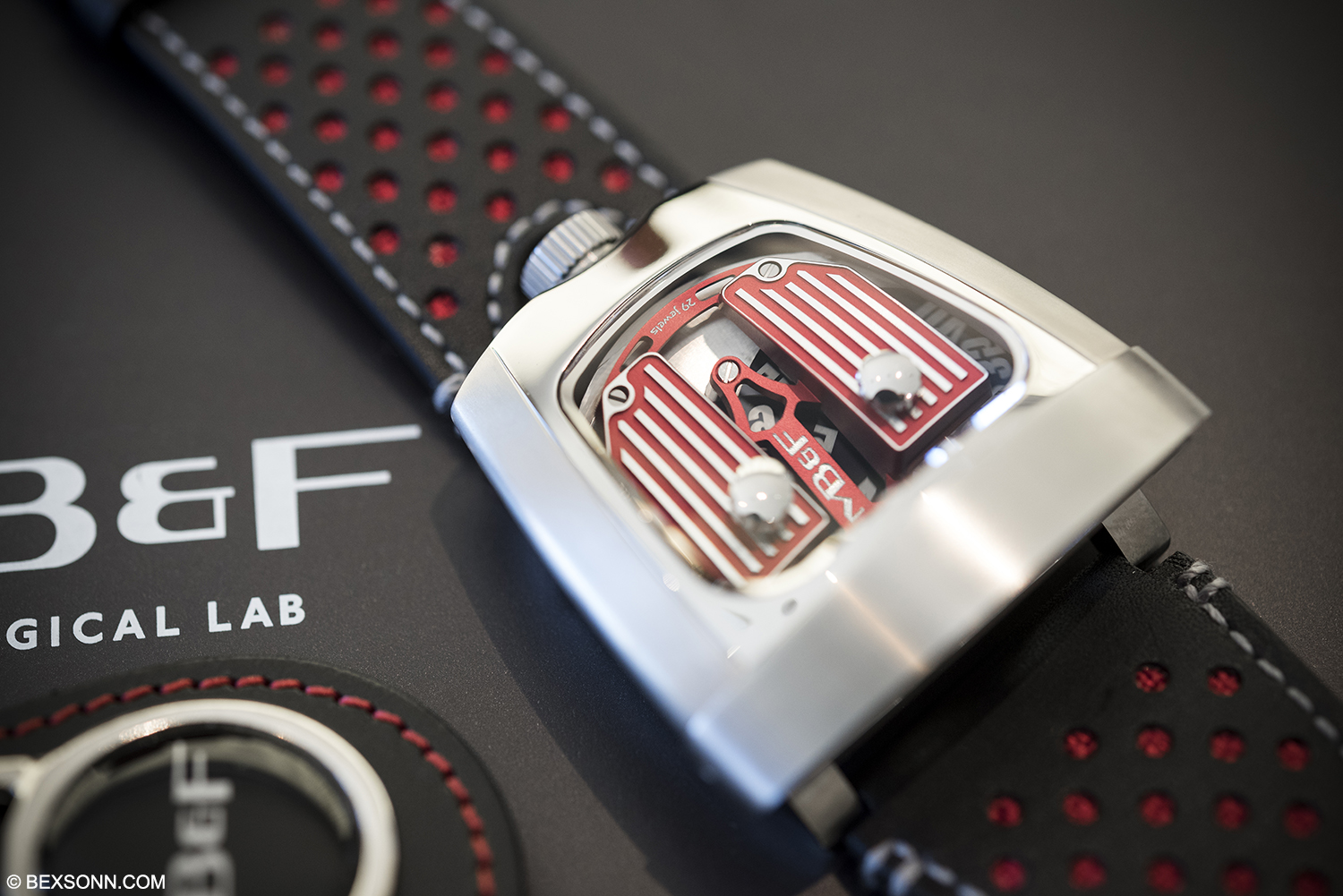 The HMX has been created with a plethora of innovative combinations of detail, form and composition. Much like the earlier HM5, this timepiece was inspired by sports cars most beloved by the manufacturer during his childhood. The influence of Maximilian Büsser’s desire to become a car designer is omnipresent in the HMX’s ‘make-up’, for example; the composition of the 46.8 x 44.3 x 20.7mm case fashioned in grade 5 titanium or stainless steel, depending on the purchasers preference, is very similar to an engine usually found on a sleek, offensively expensive ‘Supercar’. 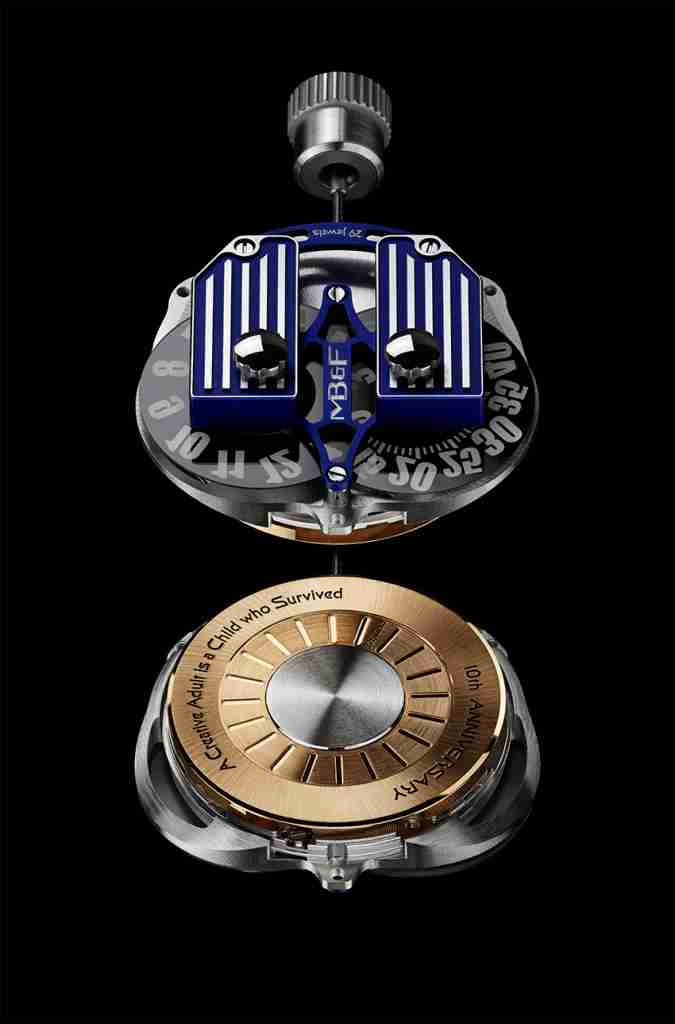 The HMX is elegant and fluid in its appearance breathing a welcomed new air of horological sophistication. The timepiece features in-house developed components such as; two optically engineered sapphire crystal prisms which magnify the bi-directional jumping hours and trailing minutes positioned horizontally inside the wider portion of the case structure. The hour and minute display on HMX are derived from circular discs rotating flat on top of the movement. Each of the two discs, one for the bi-directional jumping hours the other for the minutes, is printed with mirror image numerals that are reflected and magnified by two triangular-shaped optical prisms, reflecting the time, similar to the way a periscope works in a submarine. 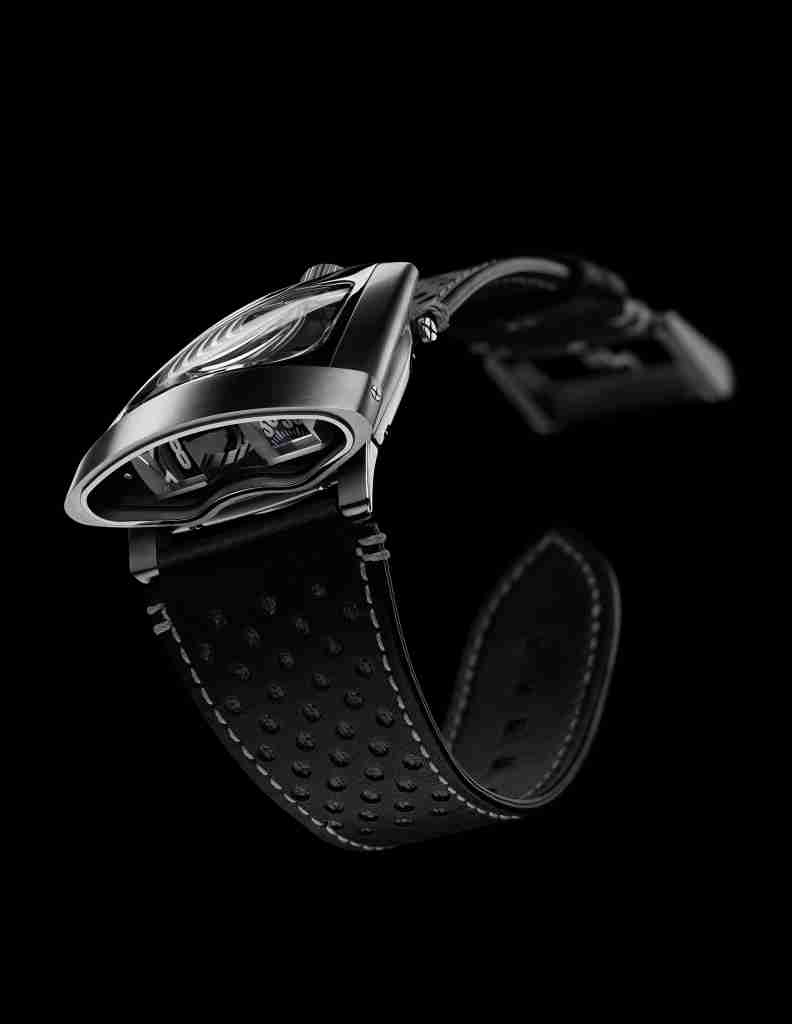 The sapphire prisms are wedge-shaped, the angles are cut precisely, calculated to ensure that light is reflected from the aforementioned horizontal indications, causing it to be perfectly legible. If one looks closely, they will notice two authentic oil caps, which the watch maker will need to unscrew when the owner requires their timepiece’s oil reserve to be topped up for jewel lubrication purposes. 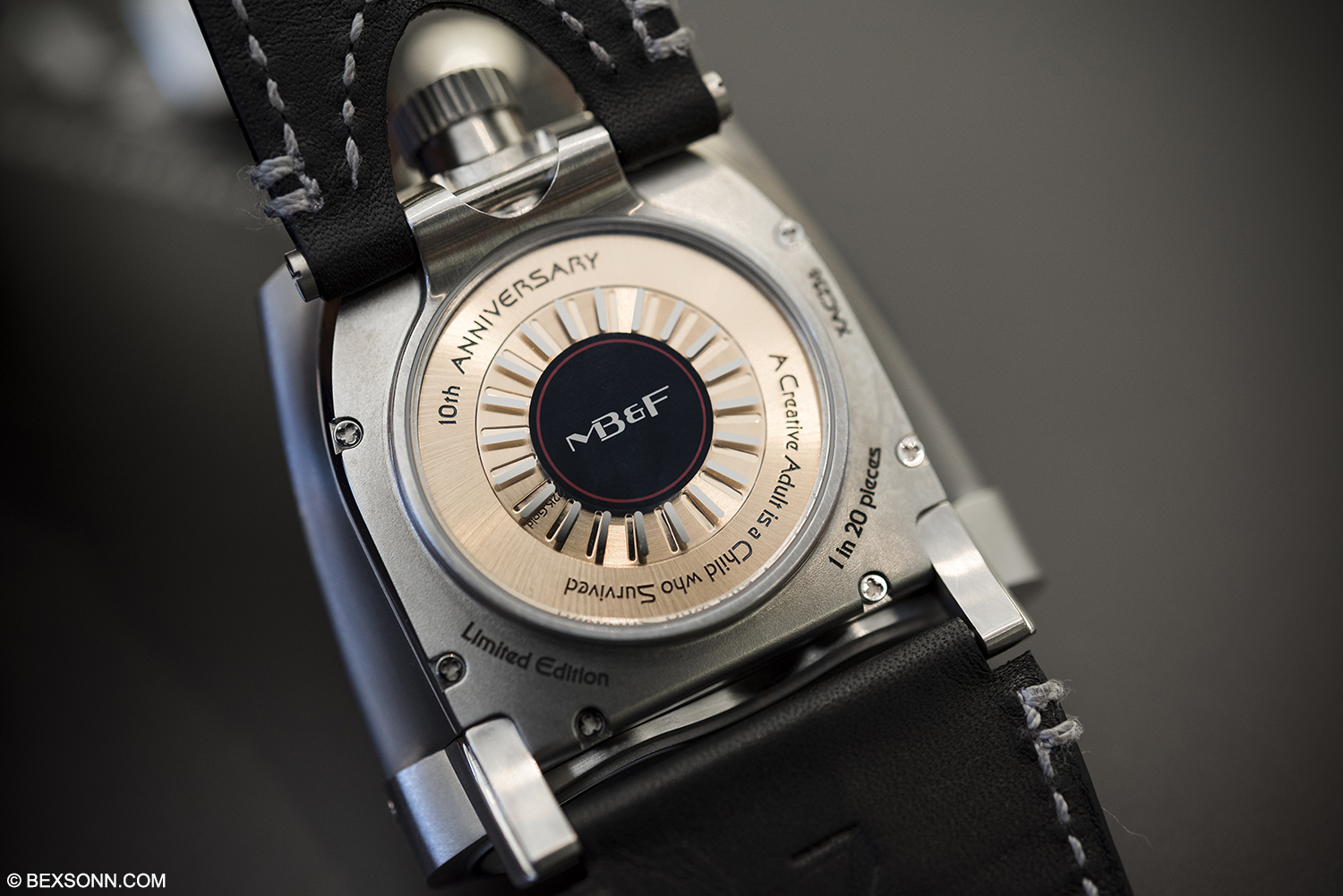 Inside the ‘framework’ of the timepiece is the manufacturer’s conscious choice of incorporating a 29 jewelled mechanical movement which winds automatically, oscillating at 28,800vph galvanizing the ‘engine’ and functional hour and trailing minutes. Decoratively, on its 22 carat gold reverse is the anniversary slogan; “A creative adult is a child who survived” engraved in bold black script. 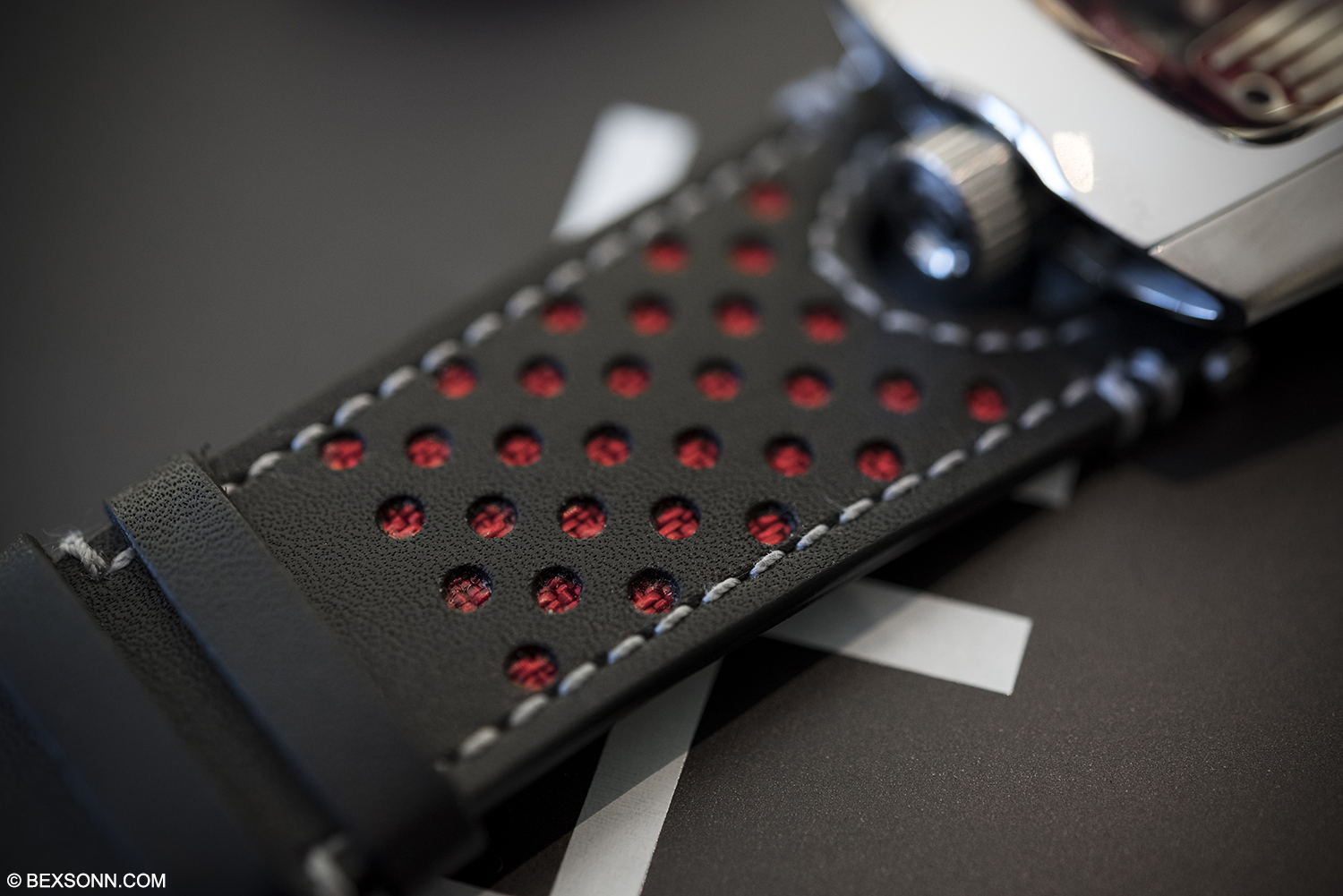 The HMX’s movement components are covered by anti-reflective sapphire crystal, protecting Mr Büsser’s creation he endeavoured to get “just right”. The HMX is secured by a partially perforated onyx calfskin strap with symmetrical stitching which compliments the lighter metal colour of the monogrammed crown neighbouring its surface. The detail of the timepiece’s strap and 3 dimensional horological engine, showcased on the front of the timepiece under sapphire crystal, is available in a variation of four diligently selected colours, paying homage to motor racing: Lotus Black, for one of the most successful teams in the history of motor racing; British Racing Green; Bugatti Blue, after Mrs Bugatti’s Gauloise cigarette packets and Ferrari Red. 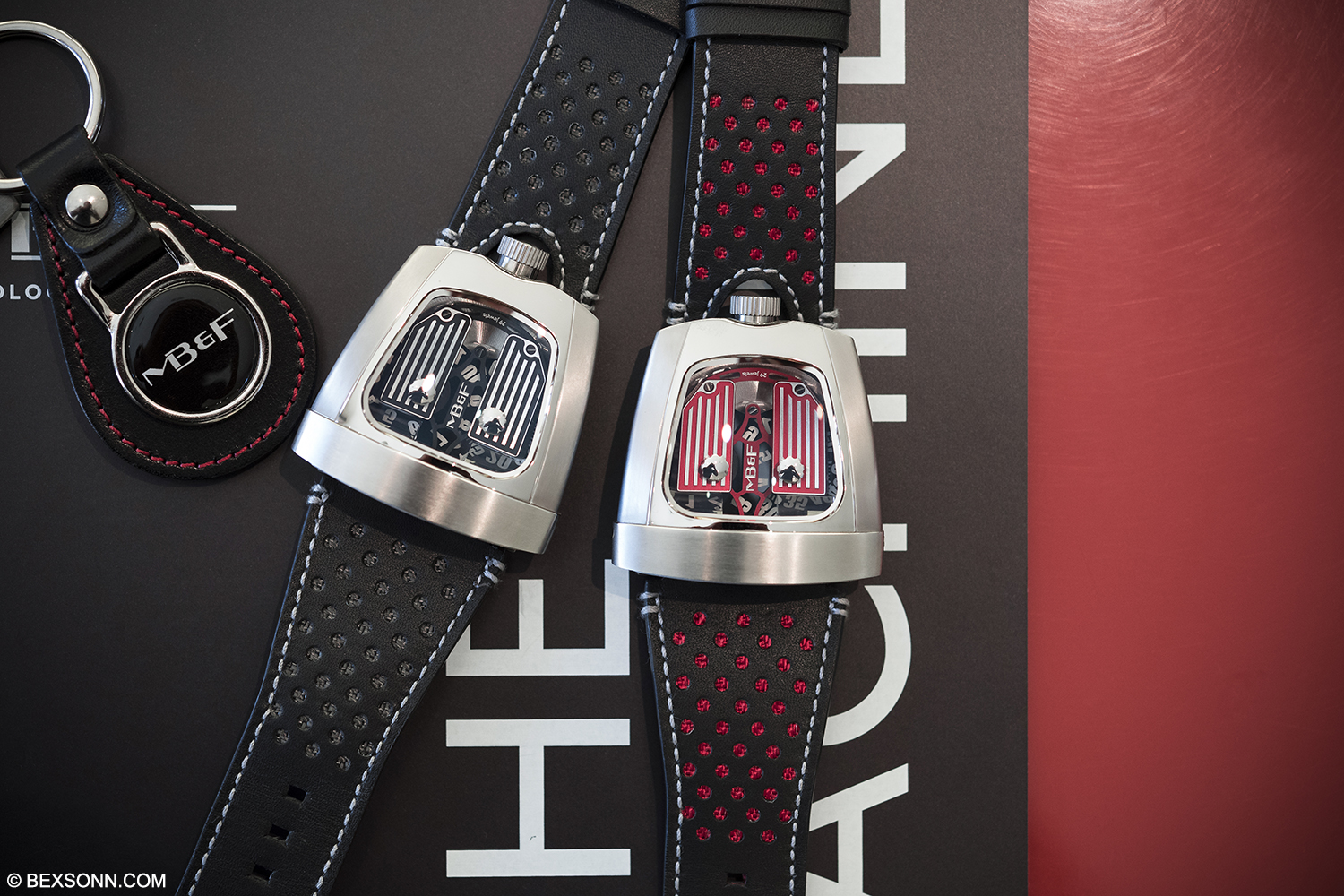 This timepiece is MB&F’s most affordable piece to-date, striking industry tradition whose history dictates that a celebratory piece is typically the most expensive. The action of pricing the 10th anniversary at such a modest price is indicative of the watch manufacturer, who continues to mock and challenge convention. Though this timepiece did leave one lingering question; of course we’ve only reached the HM6, so in the next few years what would the HM10 actually be called? However, we’ve been assured that this will not be a problem in the future.

The new Horological Machine X is limited to 80 pieces in total with 20 being made in each colour and retails at £24,900. It is available to purchase from selected MB&F outlets such as Marcus Watches. For more information on this piece of Haute Horlogerie visit the official MB&F website. 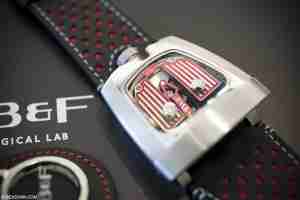 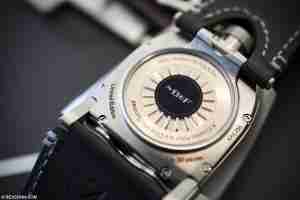 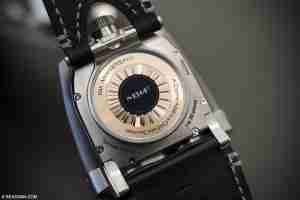 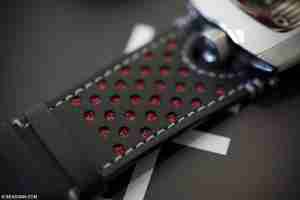 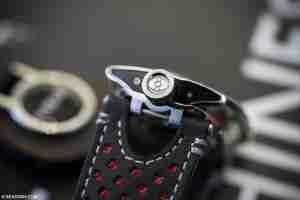 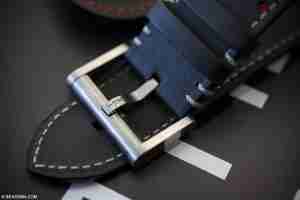 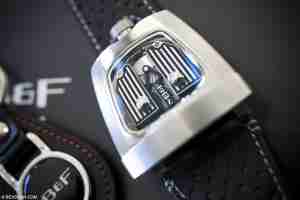 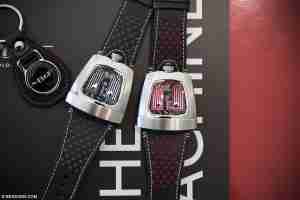 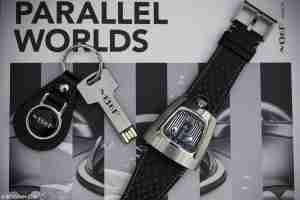 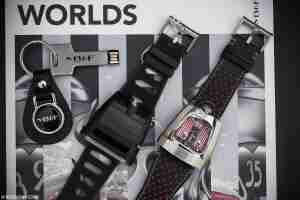 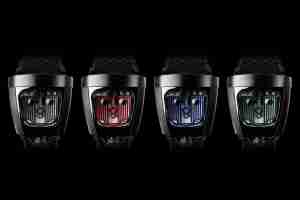 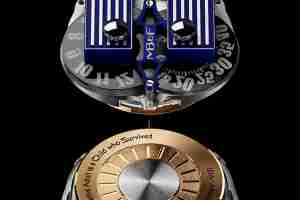 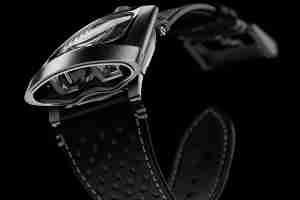 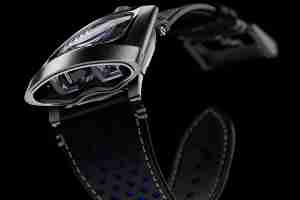 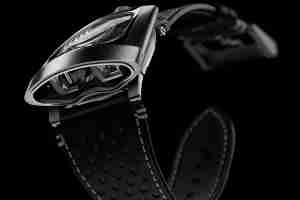 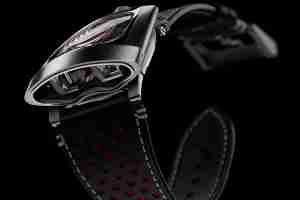 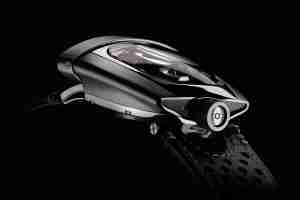