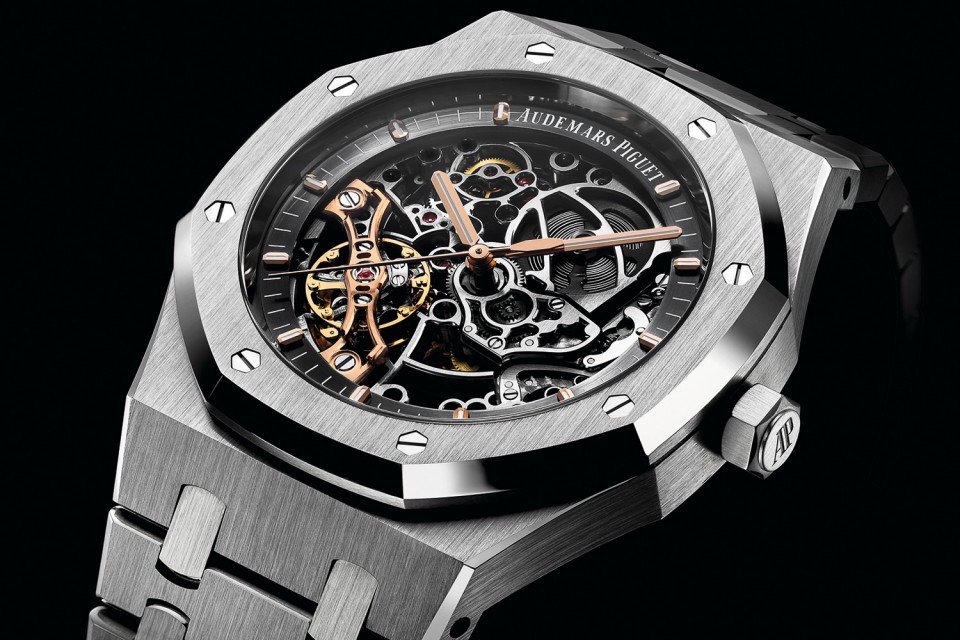 Royal Oak Double Balance Wheel Openworked: The Royal Oak is perhaps one of the most distinctive watches out there. With its masculine octagonal shape, exposed screws and integrated bracelet, it is easy to recognise from afar. Moreover, the watch in itself is a legend for pioneering the use of stainless steel in haute hologerie, thanks to a certain defiant Mr. Genta in the 70’s who was inspired by the porthole. What I’m trying to say is, a simple time-only Royal Oak, say a Ref. 15202 Jumbo or the larger Ref. 15400 is enough to get noticed. That being said, what Audemars Piguet has released this year at SIHH goes one step ahead of that: The Royal Oak Double Balance Wheel Openworked. 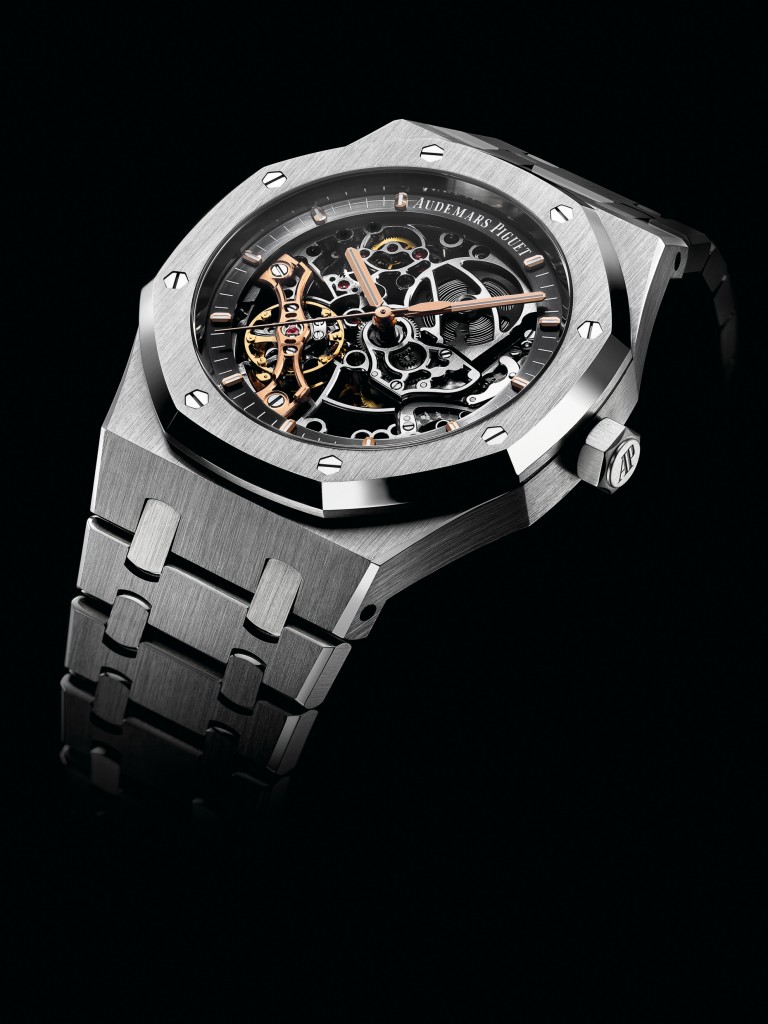 This is not the first time the Royal Oak has been skeletonised, but this weeks unveiling by Audemars Piguet features something really special: The Calibre 3132, featuring two balance wheels, the first time this has happened in any watch. As this is a world première for this feat, it makes sense that the guys at Le Brassus decided to reveal it through the openworked dial. 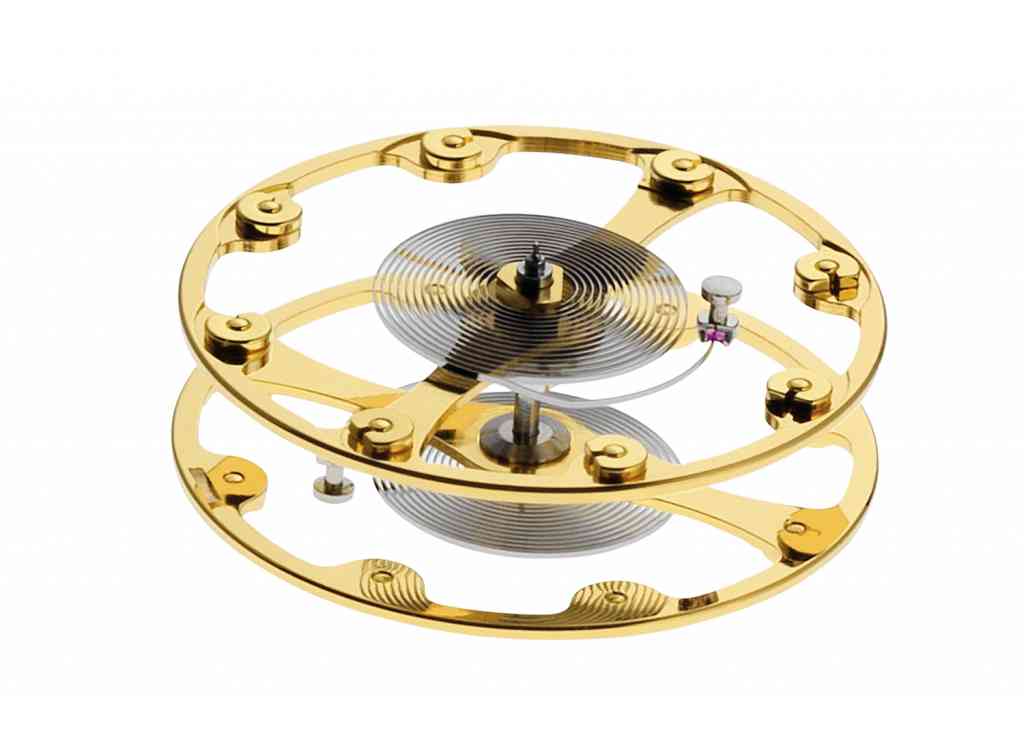 Beginning with basics, the balance wheel is a relatively simple mechanism, acting as the beating heart of the watch, as it swings it coils the balance spring, which after reaching its maximum amplitude starts to uncoil and releases energy, powering the watch. But where it gets complicated is the fact that the balance has to release energy in a very precise and consistent manner to keep accurate time and getting this right is made harder as the nature of a wristwatch entails that it is ever-moving and is prone to being knocked. Therefore, it has to be resistant to the likes of changes in temperature and defy gravity. 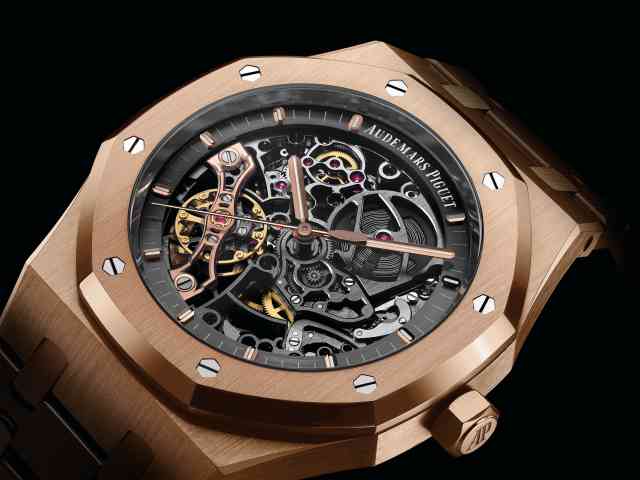 While the mechanisms of basic balance wheels in most watches already manages this to an extent, Audemars Piguet claims that the integration of two balance wheels in this new Royal Oak greatly improves the precision and stability above the existing mechanisms. Called the ‘Dualbalance’, it works by tackling the stabilising issues found on single balance wheels, as single wheels are prone to errors and loss of stability through friction, and this affects its rate. The thinking is that through fixing a second balance wheel and balance spring assembly on the same axis, this patented mechanism adds greater mass and cancels out each others errors and self regulates in its varying positions, consequentially resulting in greatly improved stability and precision. 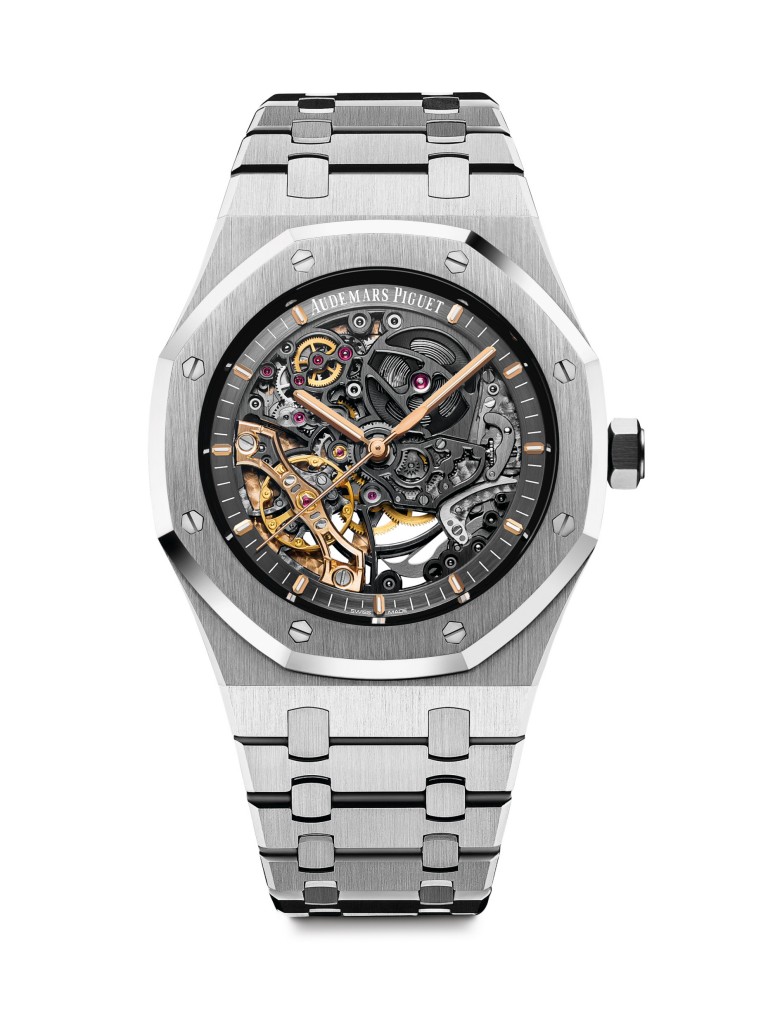 This openworked Royal Oak is based of the 41mm Ref. 15400 and in terms of the case and bracelet, what you get is similar, with the superlative finishing you would come to expect of a Genta bracelet, brushed, polished and bevelled to perfection. The openworking though brings this watch to a different level. It is common thought that openworking, or skeletonisation is merely an aesthetic and artistic endeavour, but this is a facile misconception as cutting away material to reveal the movement is one that involves a great degree of watchmaking savoir-faire. A perfect balance must be found between cutting away the right material and artistic beauty as too much removal can affect the watch’s tolerance and shock resistance.

What you get in this openworked Royal Oak is exactly that, with the hand decorated and finished movement the best you will see in watchmaking. What stands out really is the finishing of the interior angles, something that to this day milling machines are still unable to do and can only be achieved by hand. Accenting this slate grey dial is a rose gold balance bridge to showcase the double balance wheel and rose gold hands to stand out and improve legibility.