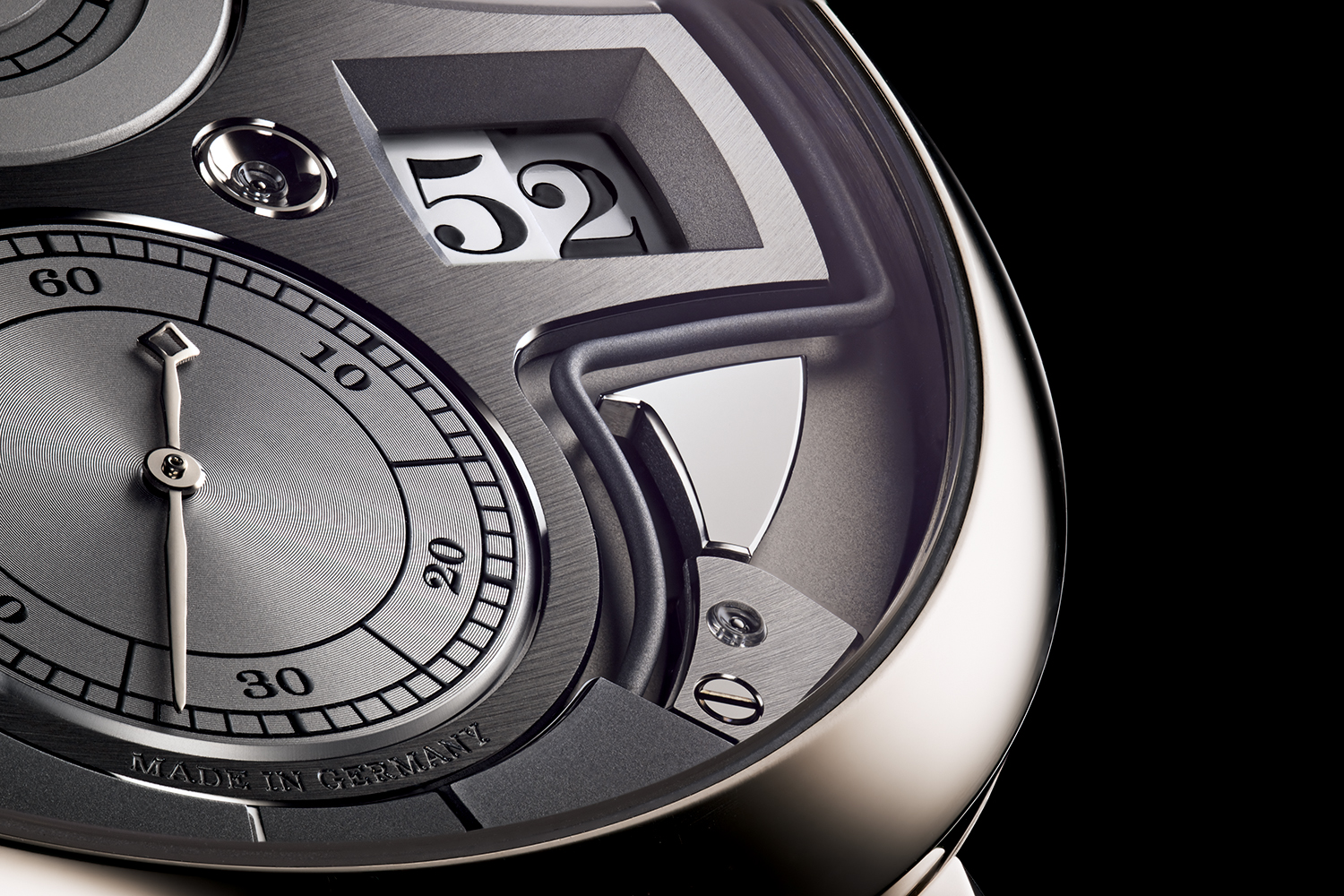 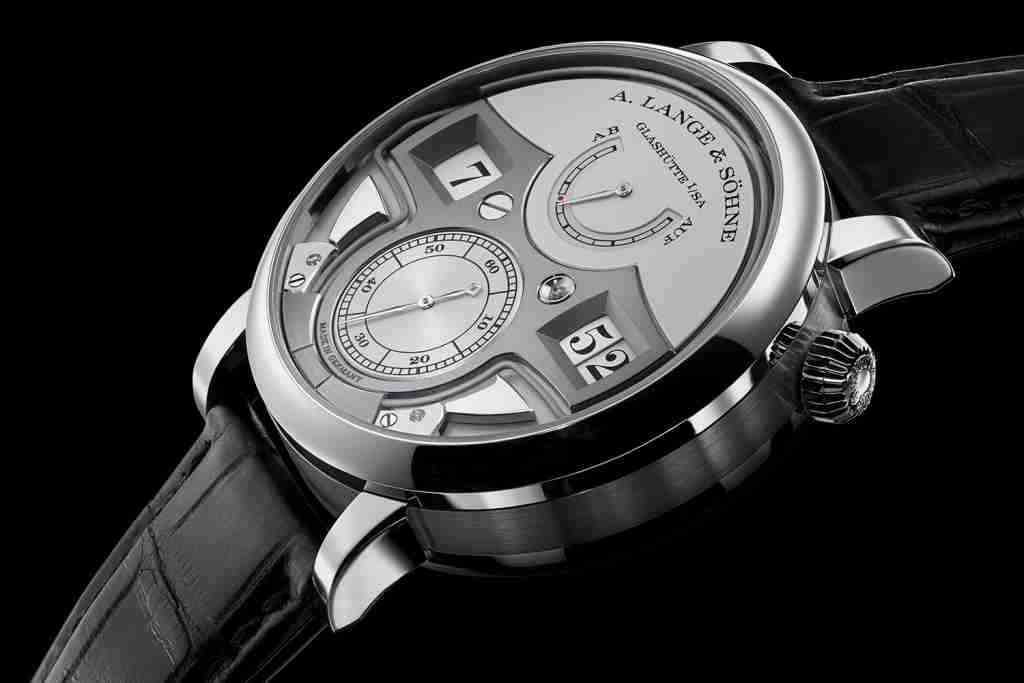 Lange Zeitwerk Minute Repeater: The 25th Salon International de la Haute Horlogerie is here and with that, there will of course be a plethora of exquisite timepieces showcased. But one that has already caught my eye is this Lange Zeitwerk Minute Repeater. I’ve always been intrigued by this piece and it was good to see these being assembled in person just a few months back at the Manufacture in Glashütte. It was rather interesting to learn that the Zeitwerk is the only piece made by Lange that is assembled from start to finish by the same person. We’ve spoken about chronograph complications and just how difficult they are to make, and maybe even something along the lines of them be the 2nd hardest complication to produce? Well, the minute repeater is the first and you’ve already heard me say, Lange don’t do things by halves! 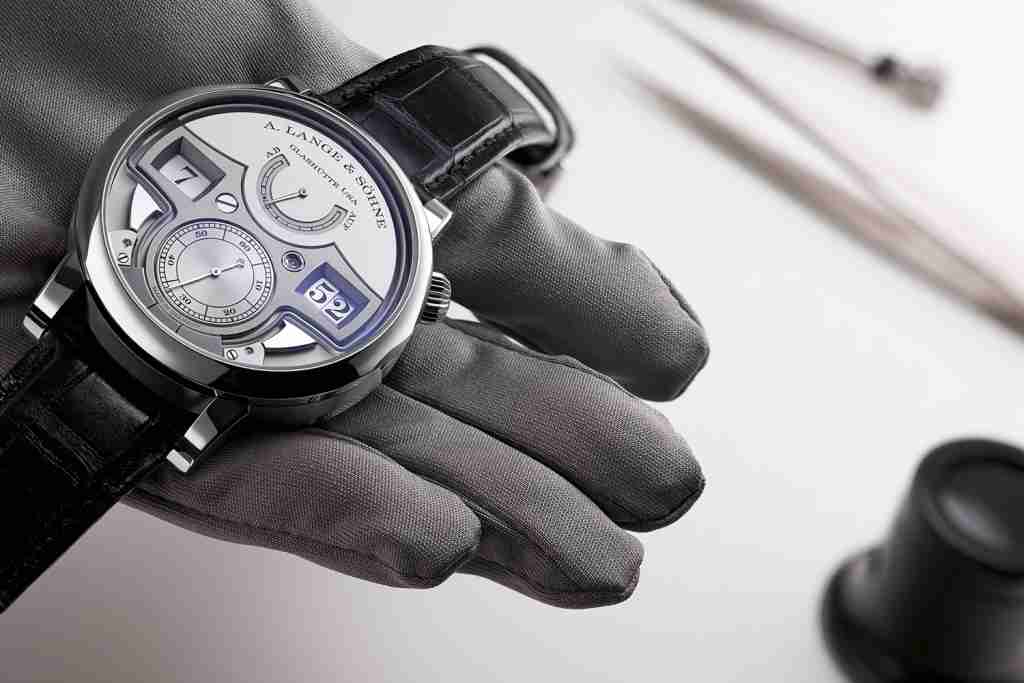 The Zeitwerk is a piece we’ve never really focused on here but admittedly have admired for some time and it’s not hard to see why, just look at how cool it is! The Zeitwerk is nothing new and has long been a part of the Lange line-up. This Minute Repeater version even utilises the same case as Zeitwerk Striking Time, however there is a difference.

This new iteration of the Zeitwerk is the first A.Lange & Söhne model with a striking mechanism that makes use of a decimal minute repeater that sounds the hours, ten-minute intervals and minutes – rather than your more traditional hours, quarters and minutes. As I mentioned above Lange don’t do things by halves and achieving this feat is no easy task but being Lange, who always strive for precision, it only makes sense they produce a more accurate minute repeater. 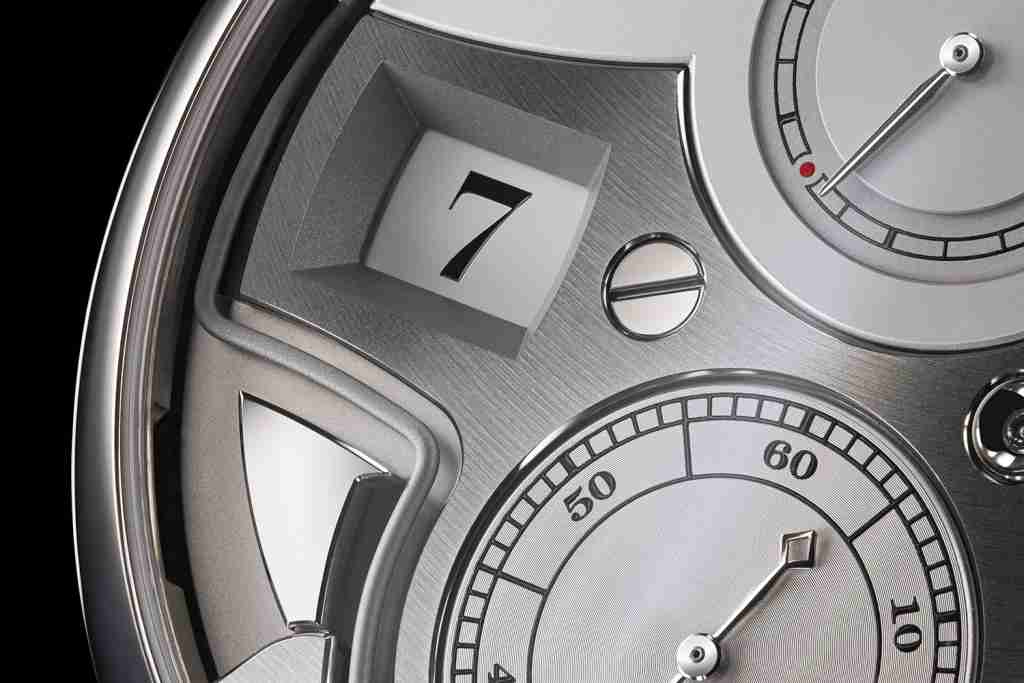 Of course being a Zeitwerk the time is eloquently displayed via a jumping hour digital display, which makes use of an hour ring and two-minute discs. Inherently jumping discs of any sort require more power, so Lange devised a patented constant-force escapement, which delivers a uniform amount of energy during the entire power-reserve period.

Traditionally a minute repeater is activated by a slide leaver usually located on the case band, however, the Zeitwerk Minute Repeater features an elaborate pusher system for activating the striking mechanism at 10 o’clock. To maximise the quality of the sound, the engineers calibrated the movement with the case down to the smallest detail. To make sure the minute repeaters resonance is never interrupted, due to depletion of mainsprings power, the striking mechanism cannot be activated if the remaining power reserve is less than twelve hours. This is smartly indicated by the power-reserve at 12 o’clock, with a red mark. 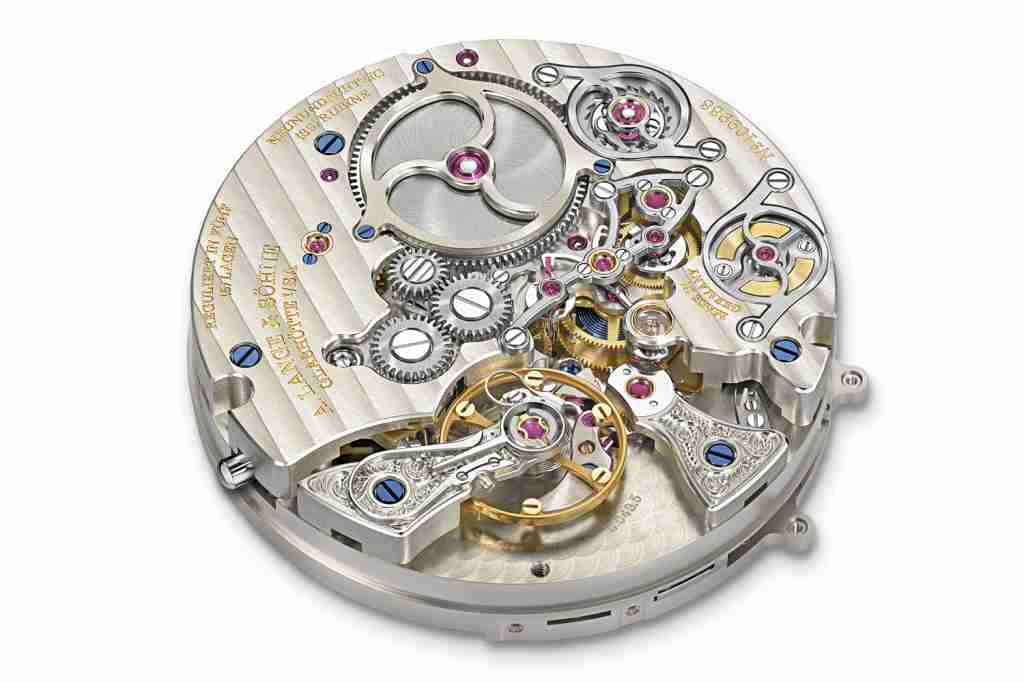 The Zeitwerk Minute Repeater houses the, 771-part movement, L043.5 manufacture calibre, which has been beautifully hand-finished. Beneath the unique hand-engraved balance cock, the balance wheel with eccentric poising weights and a free-sprung balance spring crafted in-house breathes with a frequency of 18,000 semi-oscillations per hour. The resonant timekeeping instrument with a diameter of 44.2 mm is available exclusively in platinum.

The dial is, largely, made up of solid-silver that has a satin finish, which is nicely broken up by a time bridge made of black-rhodiumed German silver. This frames the hour and minutes apertures that are located on the same plane. The black-polished steel gong hammers are visibly arranged on both sides of the large subsidiary seconds dial. The hours are struck on the left, the single minutes on the right. For the double-tone ten-minute counts, both hammers strike both gongs slightly offset in time. 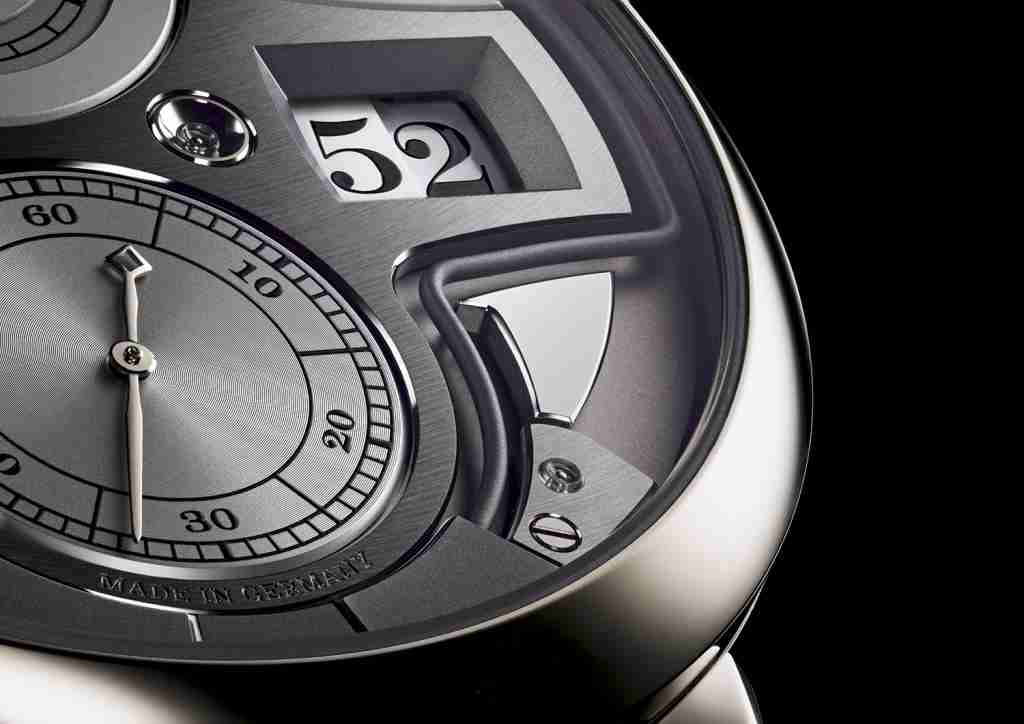 The Zeitwerk Minute Repeater is only the second model of the Zeitwerk family to feature a chiming indication. With its already downright cool looks, this timepiece displays Lange’s appetite to push the envelope further with in their ever-growing and impressive repertoire of creative haute horlogerie.

The Zeitwerk Minute Repeater will retail at €440,000 and as mentioned before is only available in platinum. For more information, visit the official A.Lange & Söhne website. 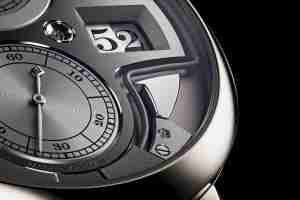 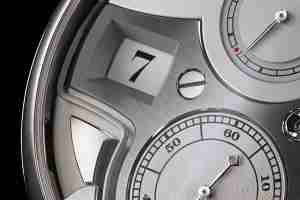 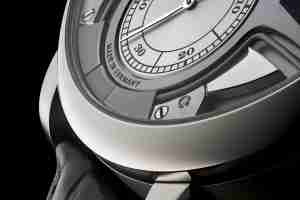 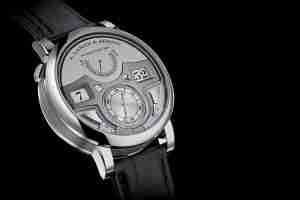 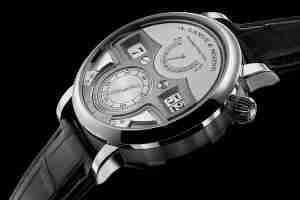 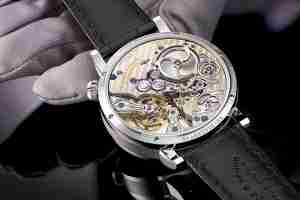 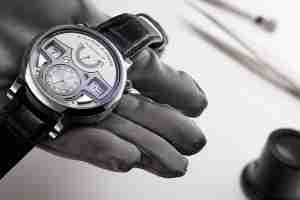 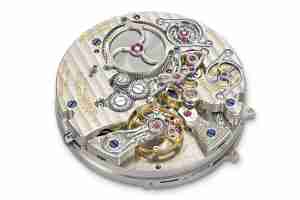