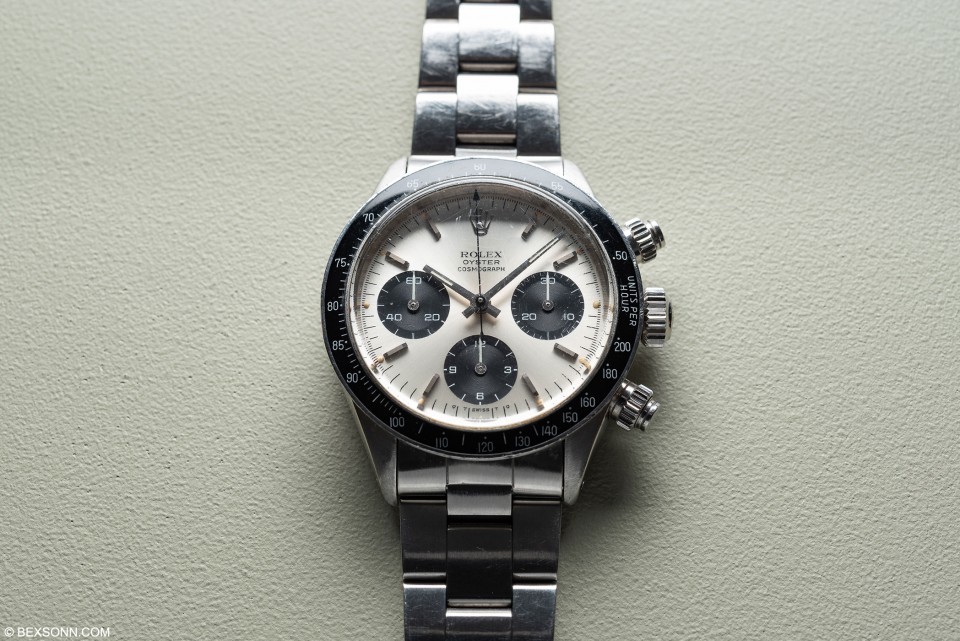 Auction season is drawing to a close and of course that means New York is the last destination of the year where watch auctions will be held. A couple of months ago we highlighted some rather intriguing lots that went under the hammer in September at Sotheby’s second London auction of the year. As mentioned before, Sotheby’s are a well-seasoned auction house when it comes to selling watches. Over the many years in doing so, they’ve set some enviable records along the way. And as testament to this, just a few weeks ago they set a new record for the most expensive Patek Philippe ref. 2499 ever sold at auction – a rather enviable feat. As also mentioned, there has been a bit of a staff shuffle at Sotheby’s, with Sam Hines, once of Bacs & Russo in Association with Phillips, now Senior Director and Head of Watches Worldwide for Sotheby’s and the gentleman who brought the gavel down on the new world record just mentioned. During our visit to Geneva we paid, Leigh Zagoory (also once of Phillips) a visit to look at some of the lots coming up for sale in their December New York auction. 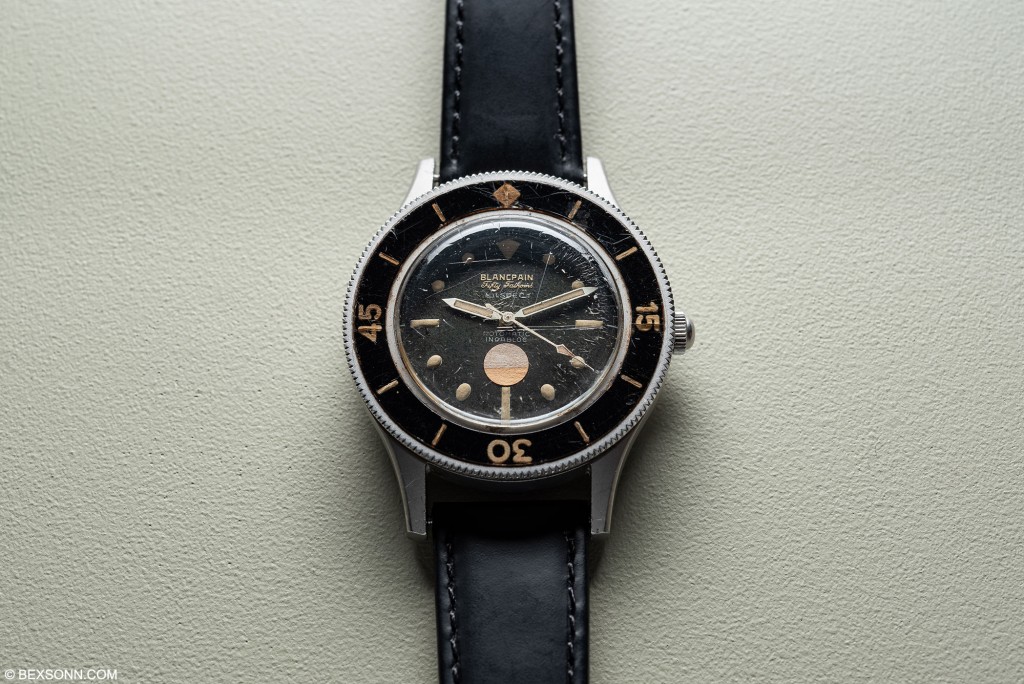 Lot 71: Born out of the product of passion by French military combat divers’ elite troops’ captain Robert Maloubier and Lieutenant Claude Rifau who were on a mission to source a wristwatch fit for their frogmen. The Blancpain Fifty Fathoms, as many of you may or may not know, is the original divers watch. Named the “Fifty Fathoms” after the British measurement of 50 fathoms, which was then considered the maximum depth a diver could make with the oxygen mixture used during those days. Released before the Seamaster and Submariner, propelling it into iconic watch status territory, ordinarily making it sought-after. 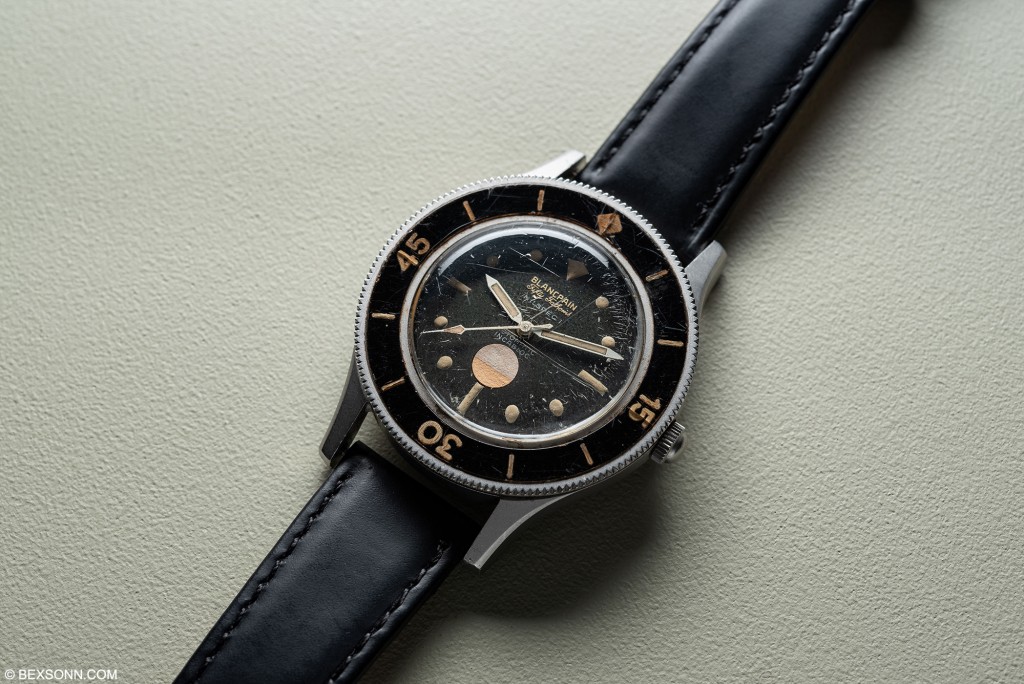 The example you are looking at is the highly desired MILSPEC I version with a humidity indicator at 6 o’clock. That said, despite some military specifications, this particular example is actually a civilian model as denoted by its two-body part case, bi-directional bezel and the luminous diamond hour marker at 12 o’clock. I must note that the radium in this Fifty Fathoms read rather high on our giga counter. This Milspec 1 Fifty Fathoms is in excellent condition with a superb black glossy dial and presents many hunting for such an example, a rare opportunity to own a watch that is not only in great condition but one that has aged rather well. 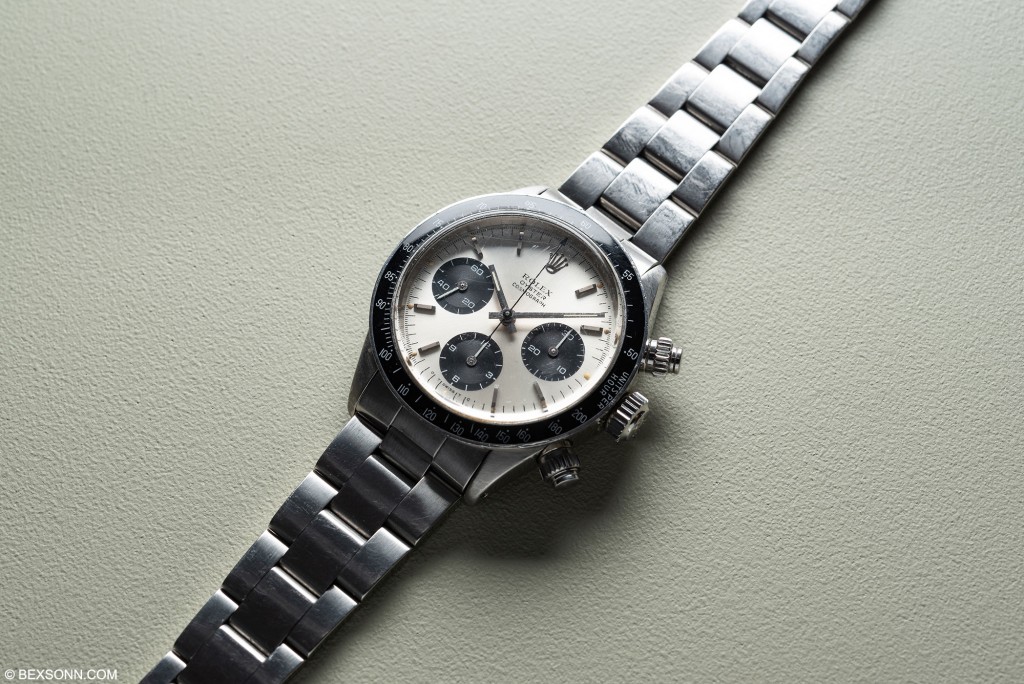 Lot 82: Most, if not all, of us are by now familiar with the Rolex Daytona but even till this day, when tasked to think about the quintessential sports chronograph of the last 5 decades, few will come to mind, but none are more iconic than the Rolex Daytona. As most of you will know by now, the Daytona was introduced as a motorsport racing wristwatch, with earlier examples exhibiting pump push pieces but Rolex had always wanted to remain true to form and so introduced the 624o: their first Daytona to incorporate screw-down chronograph push pieces. The 6240 was quickly superseded by the 6263 & 6265, which were introduced circa 1969. This particular example features a rare silver sigma dial, which has aged beautifully, with the Greek sigma letters either side of “T SWISS T” – signifying the use of white gold hour markers and hands.

This example is perhaps no different to countless others that we’ve laid our eyes on but we always hear the same cliché when it comes to vintage watches “if this watch could talk, the amount of stories it could possibly tell”. Of course, this watch can’t talk but it’s one and only previous owner can tell us a story or two, and when we reached out to Sotheby’s about the origins of this piece and its owner, the original owner replied gladly with the heart-warming story of this watch below.

“In the 1960s I was a dental officer with the US Army Europe in Germany and met a young German girl who became my wife who left her family and came back to America with me. We celebrated each Christmas in her hometown, a small town near Lake Constance called Isny im Allgäu. In December 1976 our second daughter was born and we were returning with our two children to Isny for Christmas. My German in-laws asked what I wanted for Christmas and taking advantage of their generous spirit perhaps enhanced by the addition of a new grandchild I asked if I could have a Rolex. I had become aware of the mark and had wanted one for a long time. When asked what type or model, I thought a Submariner like Ian Fleming’s James Bond would be cool but thought instead that a stop watch would be a better choice as I held a pilot’s license and back in those days before GPS small plane navigation was by dead reckoning and precise timing of landmarks. So it was to be a Cosmograph although I had no idea of its designation at the time. Isny was close to the border of Switzerland and Austria and my brother-in-law popped over the Swiss border to buy the watch. I wore that watch every day for almost 40 years. I was reminded of its presence each day as it required manual winding and it reminded me that I had to rise each morning to tend it. The watch was with me through my years as a pilot, as a dentist, as a lawyer and as a teacher. It reminded me of the wonderful Christmases with a loving family in a fairytale town which dated back to 1042. Unlike a fairytale, my marriage ended but the watch remained with me reminding me of being young in a magical town at Christmas with candlelit trees and snow. 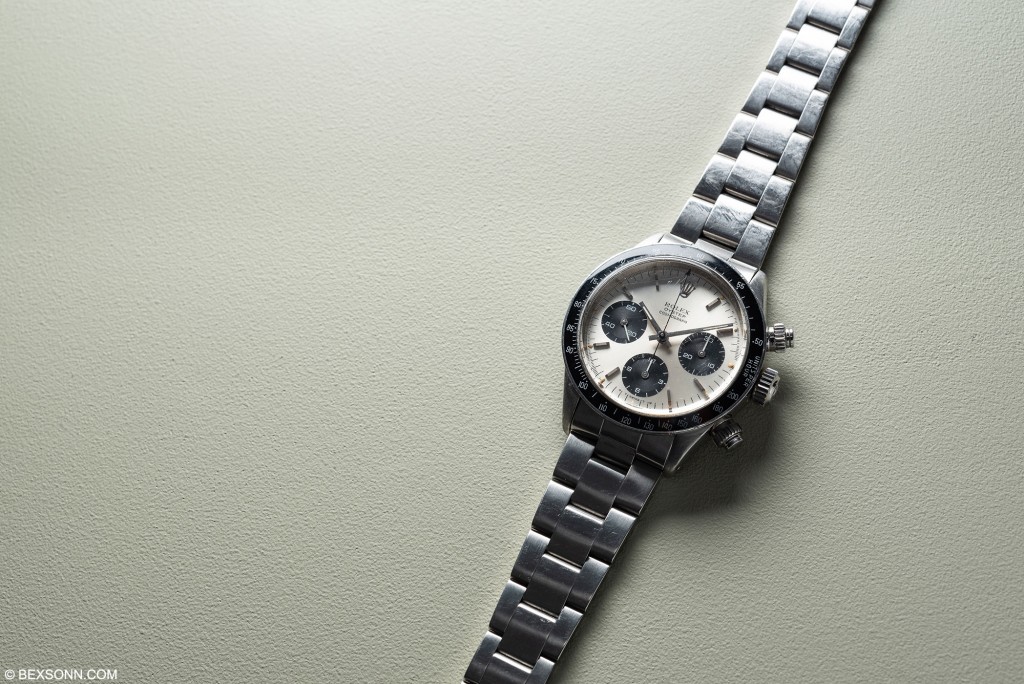 I was unaware of the watch’s appeal until one day in 1991 when I was with my soon to be wife in New York’s Tiffany store shopping for a wedding ring. My hand was resting on the counter when suddenly a man grabbed my wrist and excitedly proclaimed that I was wearing a treasure. Thereafter, I became increasingly aware of the watch as a venerated collector’s item. Then one day Rolex told me they could not service it any longer for it was “vintage.” At that time, I found a watch guild member, Rick Luts, in faraway New Jersey to care for it and I then carefully placed the watch in a safe place and started to wear a Rolex GMT instead only to take out the Daytona for special occasions and bragging rights and to see who would recognise it so I could regal them with its story. I was never what people call a watch person, but I will miss that watch which made me one and I shall miss it and those days 42 years ago.”

As you can see, this rare and fresh to market 1970s Rolex Oyster Cosmograph Daytona not only comes from the original but also has been lovingly worn for the past few decades. It comes with its original Rolex guarantee certificate and has been nicely paired on an oyster bracelet but also comes with a spare jubilee bracelet too. 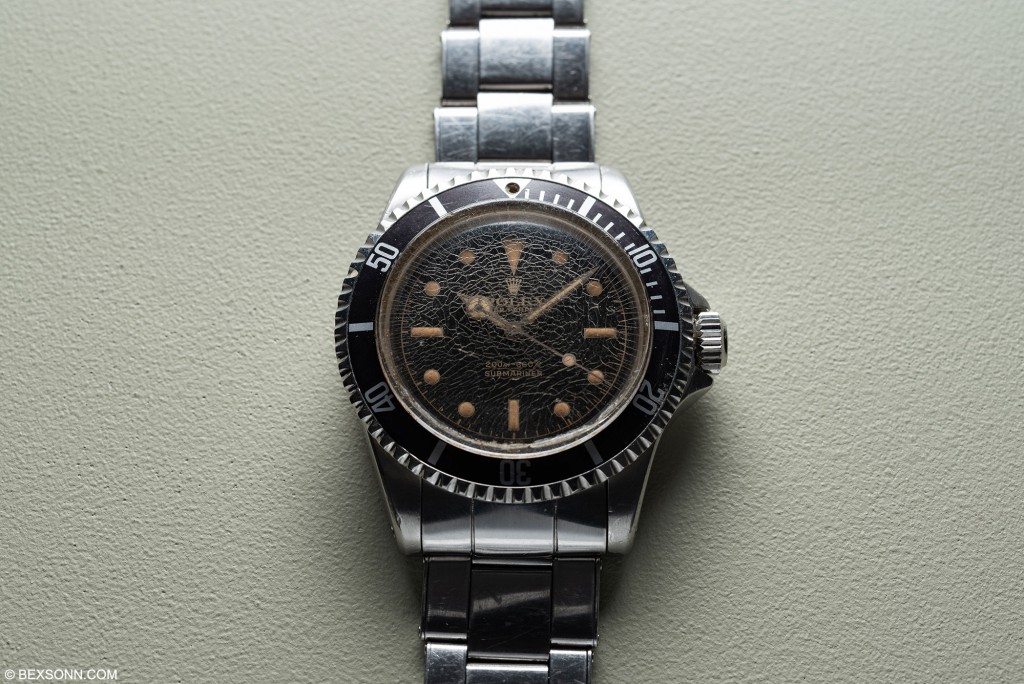 Lot 248: There is no denying that the Submariner is the ultimate tool watch and we have highlighted quite a few variations here. But there’s nothing quite like showing our readers an honest, humble and modest 5512, albeit, with a few sought after details that make collecting Rolex timepieces so intriguing. I’m always told it’s the finer details that make Rolex timepieces not only interesting but highly collectible. The luminous markers and matching hands (despite the condition of the minute hand) have aged to a lovely cream colour. Furthermore, it also impresses with a chapter ring and a crazed plexi that adds a lot of character, however, any potential buyer may want to have that changed. 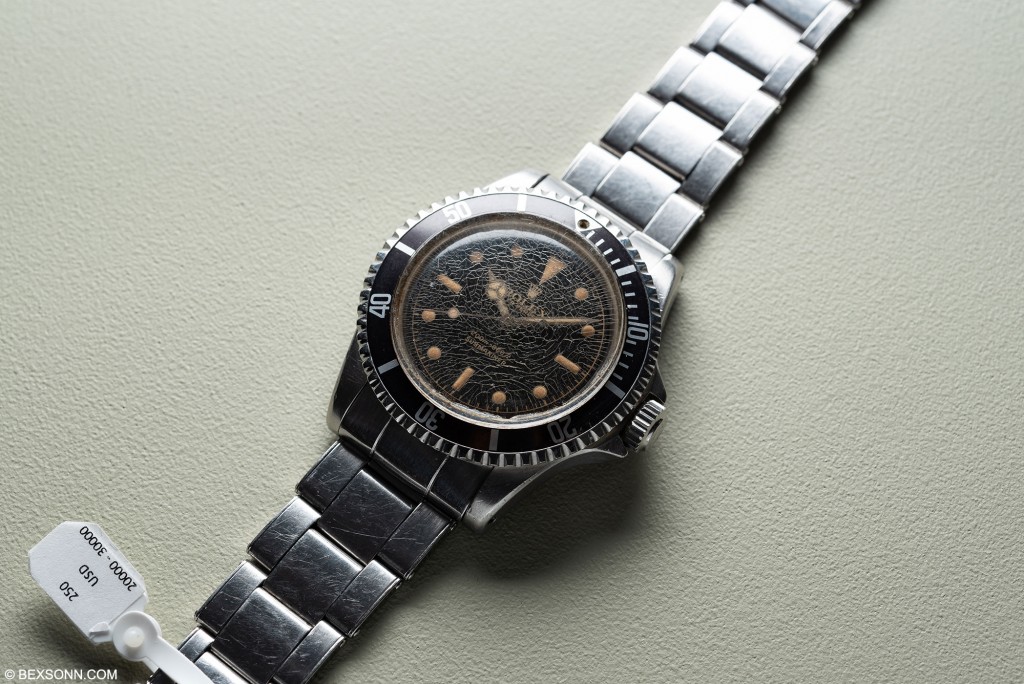 This Submariner 5512 also features, what is known to collectors as “Pointed Crown Guards” or “Cornino” – Italian for small horn. The origination of this detail is rather interesting. The very first crown-guard cases featured large square crown guards, however, clients weren’t overly pleased with bulkiness of this feature. So, Rolex filed away the square crown guard of the cases they had in stock, leaving only a small pointed guard. Thus, the “Cornino” was born. Moreover, this 5512 is being offered at auction via the descendants of the original owner. 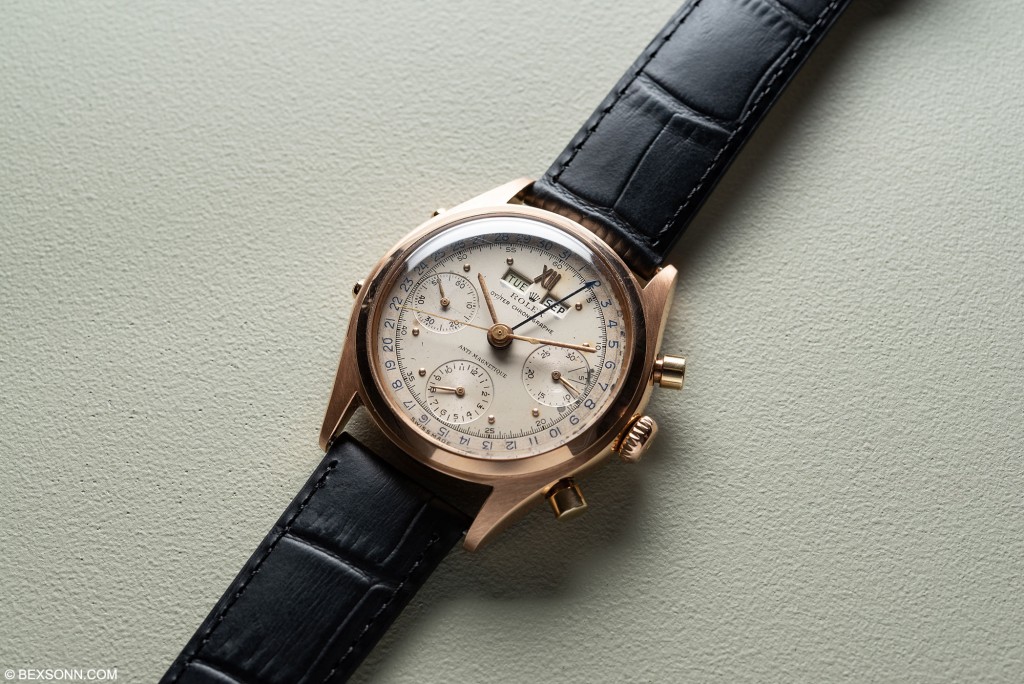 Lot 257: The Rolex “Jean-Claude Killy” Dato-Compax has always been an interesting piece but how it actually got its nickname is even more so. Jean-Claude owned a yellow gold 6036 and mentions it in the preface of a book in 1996. However, Antiquorum began using the ‘so-called Jean-Claude Killy’ for this reference around 1997/1998, since then the nickname has trickled down to all similar models regardless of reference. That said, it is widely thought that he owned the steel version but in fact the true JCK is yellow gold. In production for approximately 20 years, from the mid-1940s to the mid-1960s, during its lifespan only four references were made: the 4767, 5036, 6036 and 6236. 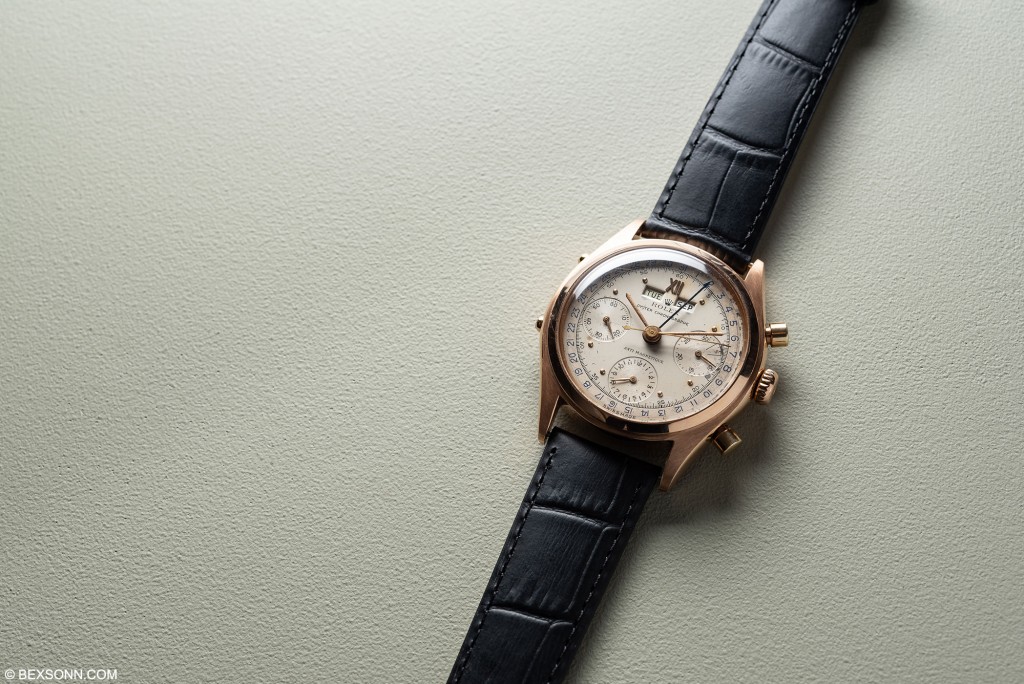 Of all the Dato-Compax examples we’ve featured over the years, we’ve never featured a reference 5036, until now. This 5036 appears to be in outstanding condition. The case appears to be crisp, with pronounced lugs and comes on a black leather strap. The dial has a warm creamy patina to it, though it does show signs of ageing and oxidisation but it is honest and lends a lot of character to the watch. It is known that the reference 5036 had quite a short production run of only 3-years, between 1948 and 1951, and it is estimated that only 50 examples of this reference were made in pink-gold.

For more lot information on The Sotheby’s New York Important Watches Auction that will take place on the 5th December at their New York HQ at 3pm BST, visit the official Sotheby’s website to view the entire catalogue.