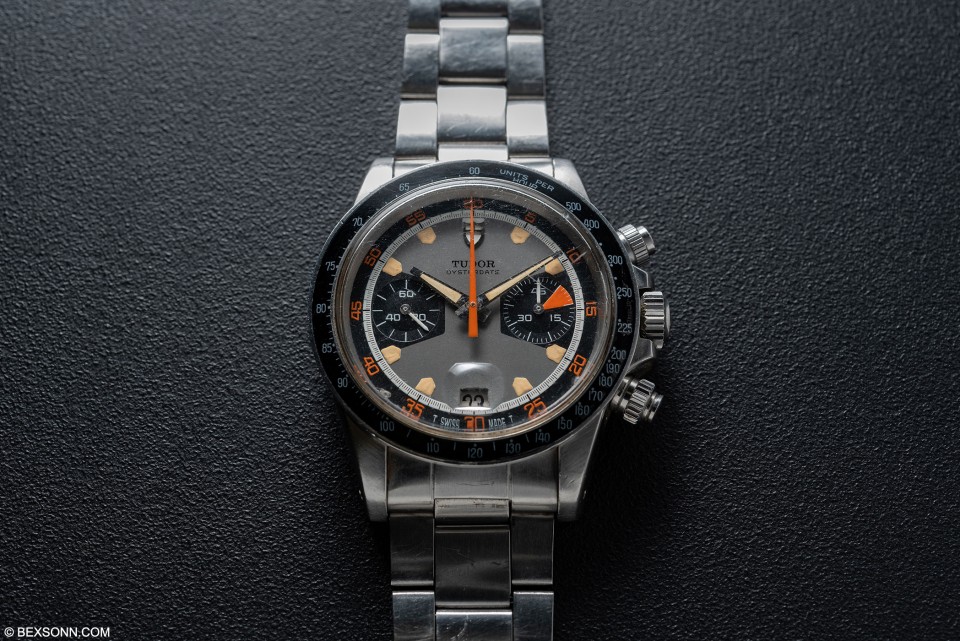 Just last week, we had the chance to get up close a personal with some of the watches coming up at Brunn Rasmussen’s November auction. Last time round we featured two of our favourite lots from their May auction: one a ‘Paul Newman’ Rolex Daytona and the other a Double Red Sea-Dweller, both of which performed rather well. As mentioned before, they’ve quite recently been touring different countries with a handful of some of their top watch lots in tow and just last week we paid their representatives a visit when they came to London. Naturally, we thought we’d highlight a couple of the lots we managed to shoot.

I’m sure by now that most of our readers are familiar with the Rolex Daytona, however, their sister company, Tudor, also made chronographs that has these days become very, very collectible. The Tudor Chronograph, of course came some years after the Rolex Cosmograph Daytona but what it gained was an Oyster case and screw-down pushers. In 1970 Montres Tudor SA, launched the Oysterdate Chronograph references 7031 and 7032. Though there was very little difference between the two references (one featured a black acrylic tachymeter and the other a stainless-steel tachymeter bezel) the biggest difference that these watches shared over their bigger brother: the Daytona, was the fact they featured 40mm cases. 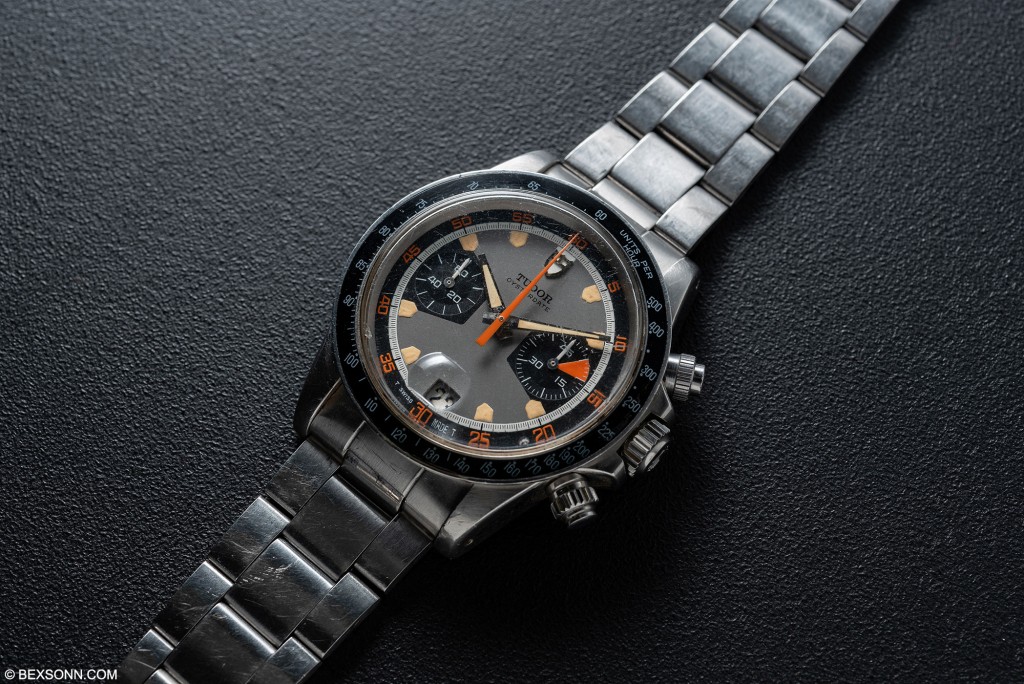 For their first ever chronograph, Montres Tudor decided to use a trio of colours on the dial on the ref. 7032/1, including a very bright and vibrant orange but these were perfectly balanced, alongside its most predominant feature; the trapezoid subsidiary dials and pentagonal hour markers. These were all shaped like the home plate on a baseball field, which led to collectors dubbing it the Home plate. While the Tudor Chronograph 7032/1 doesn’t have the same racing pedigree link as the Daytona, it can at least boast of some at one time or another. 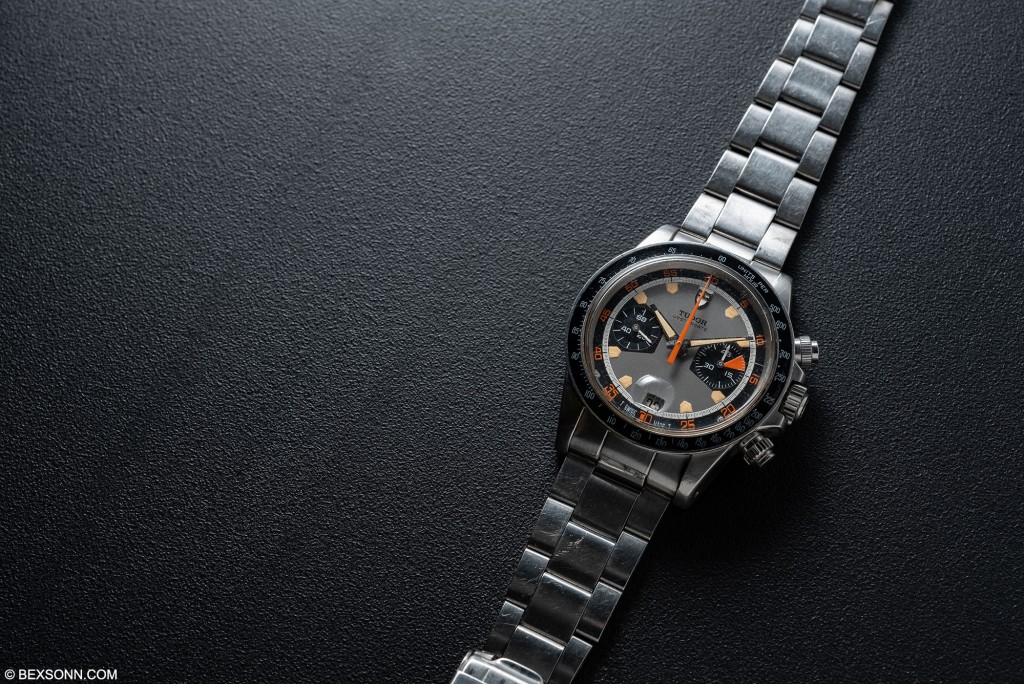 These very early 7031 and 7032 series Tudor Chronographs utilised the manual-wound Valjoux calibre 7734, with a 45-minute accumulator, at the 3 o’clock position. Like the Daytona 6263, the Tudor 7032 and 7031 featured the aforementioned screw-down pushers and square crown guards, like those seen on early Submariners. However, as a manual-wind chronograph with great water-resistance the Oyster created the small problem of having to unscrew the crown every time you needed to fully wind the watch again.

This example appears to be in great condition, with nice warm lume and a clean dial – something these early Tudor chronographs tend to suffer with quite badly. The case is in honest condition, with a few knocks and bumps here and there. Perhaps the one standout issue is that of the pusher, though this may actually play into the hands of any potential bidder. You’ll notice the push piece at 2 o’clock is a ‘millerighe’ execution and the one at 4 o’clock is more akin to a MK1. That said, the watch appears to be in good overall condition and is up for auction at DKK 100,000 – 150,000 (approx. £12,000 – £18,000). 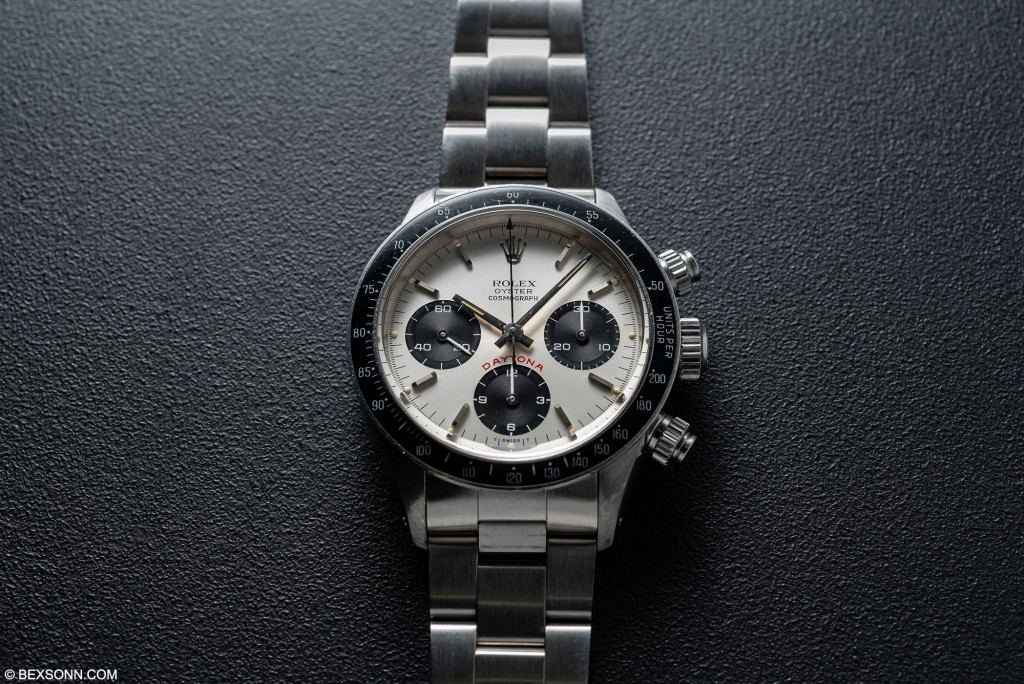 Most, if not all, of us are by now familiar with the Rolex Daytona but even till this day, when tasked to think about the quintessential sports chronograph of the last 5 decades, few will come to mind, but none are more iconic than the Rolex Daytona. As most of you will know by now, the Daytona was introduced as a motor sport racing wristwatch, with earlier examples exhibiting pump push pieces but Rolex had always wanted to stay true to form and so introduced the 6240: their first Daytona to incorporate screw-down chronograph push pieces. The 6240 was quickly superseded by the 6263 & 6265, which were introduced circa 1969. This is probably one of the truest forms of a Daytona and the fact it is a ‘Big Red’ makes it one of the most sought-after vintage timepieces of the Rolex Cosmographs. It is water-resistant to Rolex standards but it is also manually wound making it inherently more accurate. I must admit, once you’ve seen one of these in the metal you’ll notice how much more modest and detailed the 6263 is over today’s current Daytona. 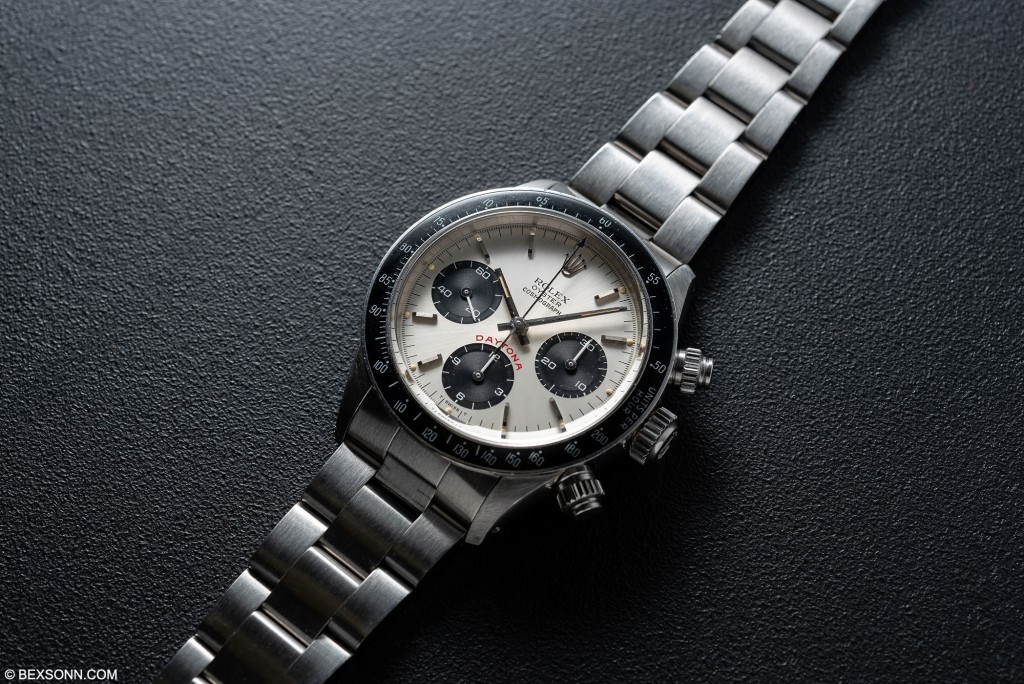 It’s just a simple, no fuss, no bling sports chronograph. This 1980 Rolex Oyster Cosmograph Daytona has the same case diameter of 37mm as its predecessor, however, it is fitted with screw down chronograph pushers and the movement is also based on the reliable Valjoux 72, the Rolex 727. This 6263 has of course been fitted with a black acrylic bezel, which remains intact and in good condition. It sports a silver dial, with three black sub dials, also known as a ‘Panda dial’ by collectors for obvious reasons, with aged tritium dots which appear in order. While we’ve highlighted many Daytonas before, the main reason I highlighted this 6263 is its condition. It features a well-preserved case as well as original pushers, bezel and bracelet, hence the reason Bruun Rasmussen have placed an estimate of DKK 400,000 – 500,000 (approx. £48,000 – £60,000) on it.

For more lot information on Bruun Rasmussen’s upcoming auction that will take place on the Thursday 29th November, visit their official website to view the entire catalogue.