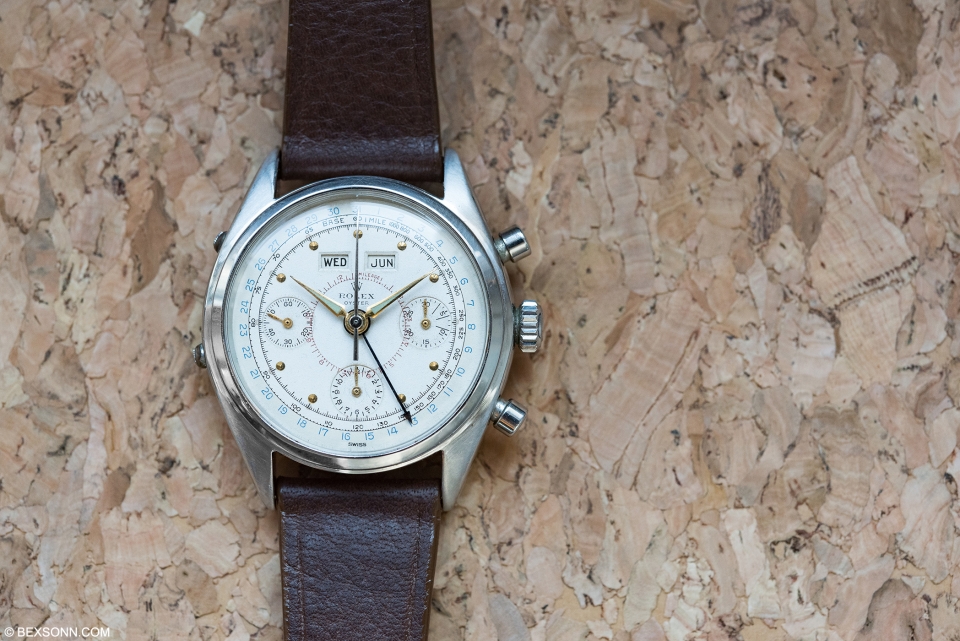 While it feels like it’s been going on for a while now, the last leg of the auction season is about to take place, after Geneva, after Hong Kong, we finish off in New York. This week, we take a look at what Christie’s New York has to offer and whether it can hold up against the other two giant watch capitals. 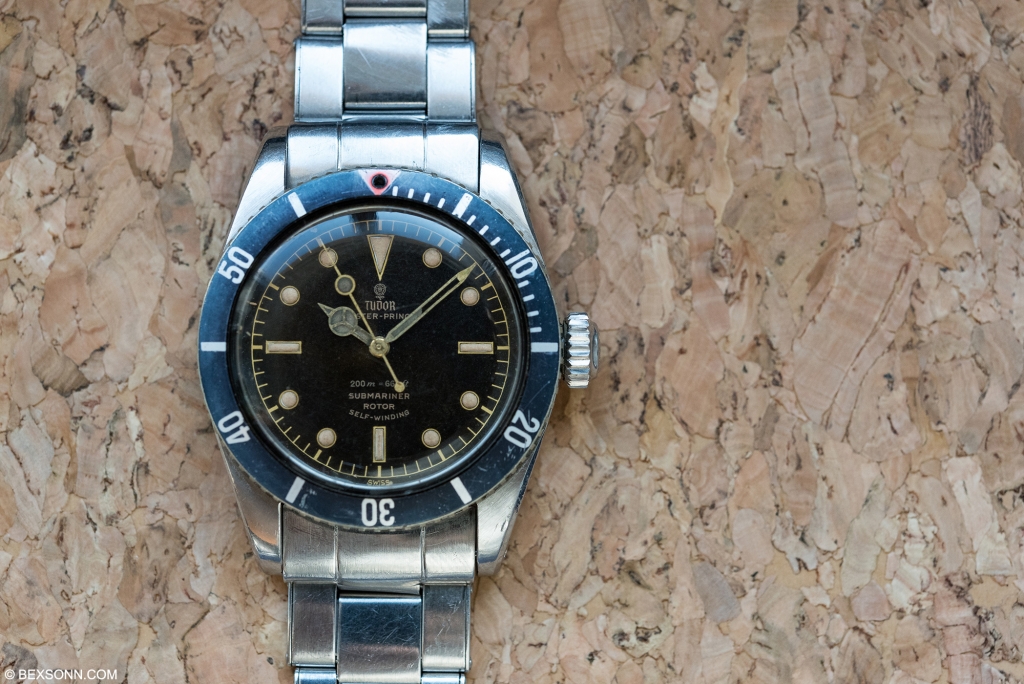 This is one of the important Tudor Submariners to own. The Ref. 7924, dubbed the ‘Big Crown’, due to its large 8mm crown and similar to its big brother, the Rolex Submariner 6538. New to this model when released in 1958, was the increased depth rating, doubling that of its predecessor and also sporting a thicker case. The no crown guard look for a tool watch, with its simplicity and symmetry is a look that is admired by many collectors. I tend to agree that there is certainly a purity with Rolex/Tudor sport models without crown guards, both in its design and primitive functionality.

This particular Ref. 7924, is fresh to the market and has a remarkable case, with strong bevels and a very thick case. This example is definitely not a safe queen though, with cracked lume on it minute hand and slight tarnishing on the dial. While there is noticeable wear to the watch, the thick case makes up for it and I do think that its rarity will play a role in the success of this Submariner. 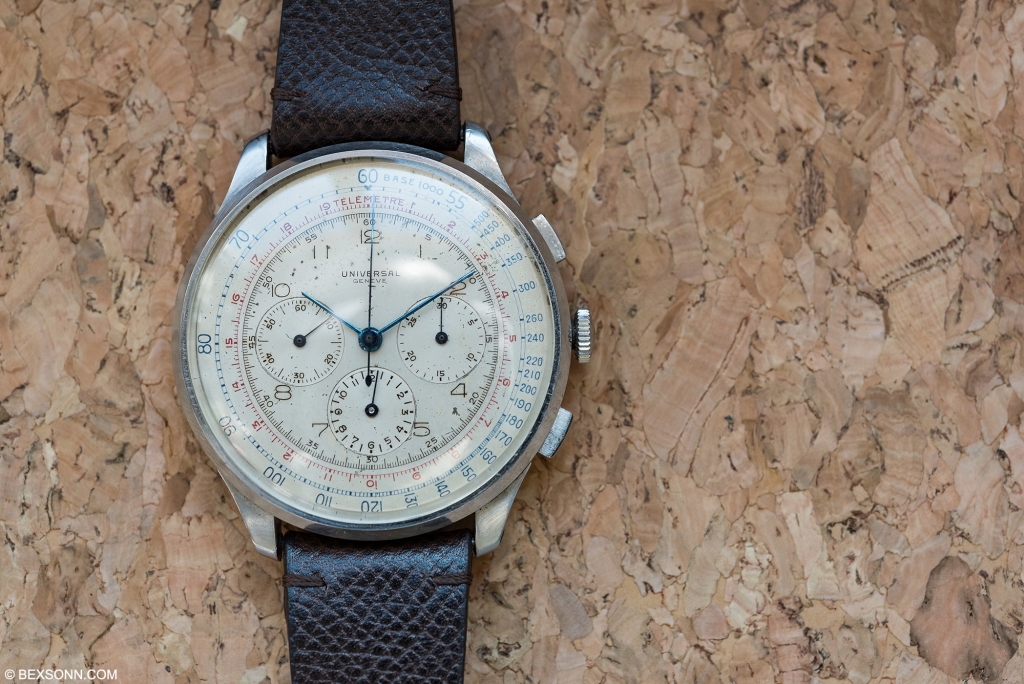 If you think about rare Universal watches, perhaps a Tri Compax will come to mind, or a Nina/Evil Nina Compax, but for the true connoisseurs of Universal Genève out there, there is a grail in the form of this behemoth 46mm Compax.

Sure, even by today’s standards 46mm is large but it is not unbelievable for someone to be wearing  a watch of that size. What you have to remember though, is that while the diameter of a watch is a good indication of its size, it doesn’t tell you how it wears. A Panerai of similar size will wear much smaller as it has a thicker bezel and more going on but when you consider this UG, with a thin bezel and large dial, this is perhaps the equivalent of wearing a dinner plate on your wrist.

The size is justified, as it was a very specialised model made for racing and the military but to have a watch made in that day at this size, where the norm was perhaps a dainty 35mm Calatrava, is absolute madness. This is a truly rare watch, with only a handful of examples in this case style known to exist. The dial does have some wear to it but when are you going to find another example? 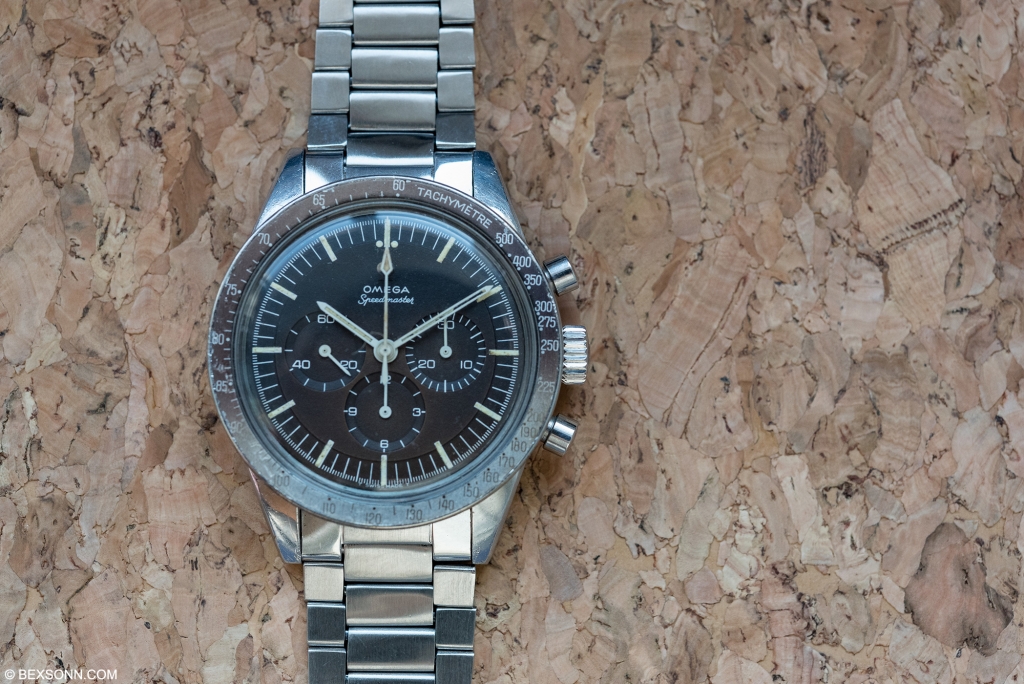 This lot is perhaps one that caught my eye the most, in what has to be the one of the most unusual Speedmasters out there. This 105.003-65, dubbed by collectors as the ‘Ed White’, doesn’t need much explaining. One glance and you will know what I am on about.

It is widely known and seen, that Speedmaster bezels can age to a blue/grey tone, but it is very unusual to find ones that have aged to a brown colour. Certainly a very curious phenomenon, I have only seen a couple that have become like this. But where this example is so unique, is the way it has turned into this colour. With a gradient of hues running along the bezel, it finishes at the bottom where the bezel is completely devoid of colour, showing bare steel. What you get is almost a two-tone bezel, as the lot essay mentions, reminiscent of a ‘Root Beer’ GMT-Master.

What is even more intriguing about this is that similarly, the dial has gone tropical, but working in reverse. Where the bezel starts brown at the top and silver at the bottom, the dial starts brown at the bottom and graduates upwards to a darker tone. On one hand, what you get is an uneven colouration of a dial and bezel, but when put together, it strangely results in a pleasing asymmetrical two tone that I think works very well. I’d really be interested to know what kind of chemical reaction and scenario took place for something like this to happen as I doubt you will find another like this!

Of course, it goes without saying that this example sports the correct DON (Dot over ninety) bezel and correct handset, with a spear chronograph hand. The case looks to be in excellent condition and comes on a flat link bracelet. 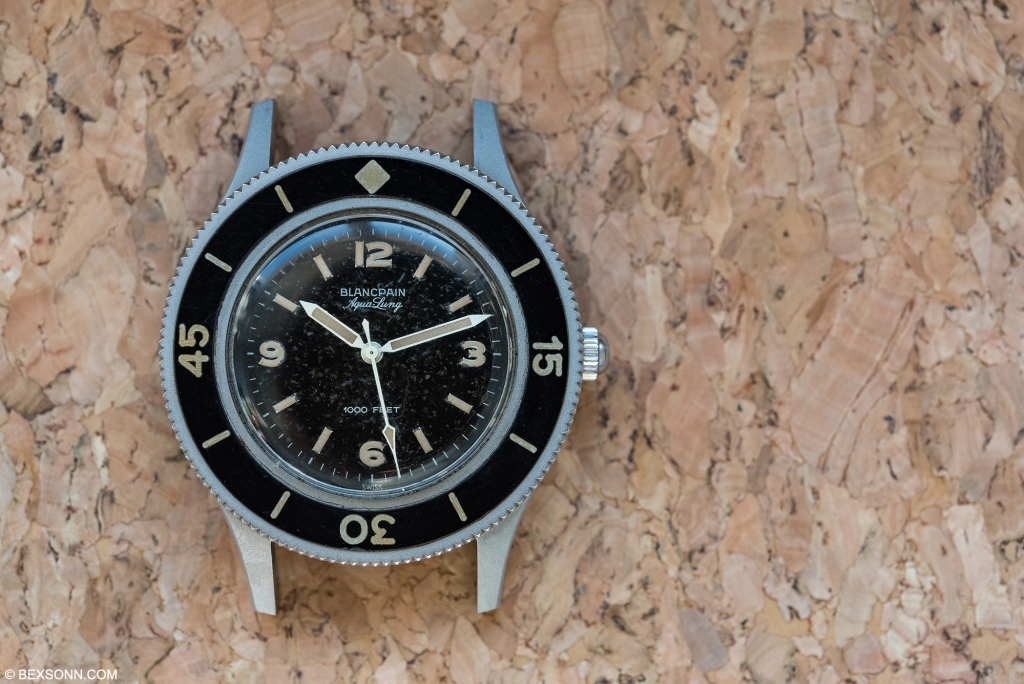 Vintage Blancpain dive watches have over the years become increasingly popular, partly due to its overall good looks and its association with the military. With its characteristic thick bezel and utilitarian layout, it’s easy to see the appeal.

This example is a civilian Blancpain Aqua Lung, marketed in the US during the late 50s. It looks similar to perhaps the more popular Fifty Fathoms, except with a larger depth rating at 1000 feet. The watch on inspection looks remarkable. Why? Because it is in New Old Stock condition. That’s right, you heard me, it’s never been used before. The lot essay reports upon magnification, no scratches can be found where the springbars are, implying that they have never been removed before. In an age where the term New Old Stock gets frivolously thrown around, with a few forum sales beginning to use ‘LNOS’ (Like New Old Stock), this is what it truly means to have a watch that is NOS. Don’t be surprised if this flies, especially in a time where collectors are increasingly becoming aware of the value of condition. 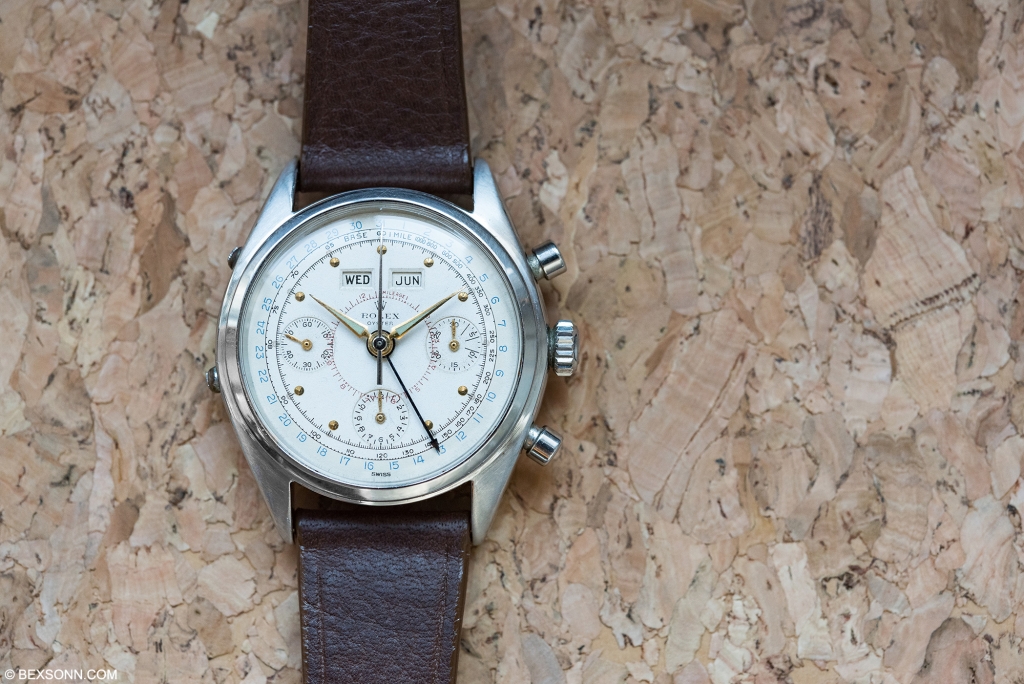 The Rolex Dato-Compax is a firm favourite of ours here and things always become a little more interesting when it’s a variation we’ve never laid eyes on before. The 6036 is the only Rolex Oyster model ever made to have featured a full calendar and chronograph, making the nicknamed “Dato-Compax” aka “Killy” (named after Olympic Skiing champion, who just so happened to wear such a piece) a simply rare and unusual Rolex. In production for approximately 20 years, from the mid-1940s to the mid-1960s, during its lifespan only four references were made: the 4767, 5036, 6036 and 6236. 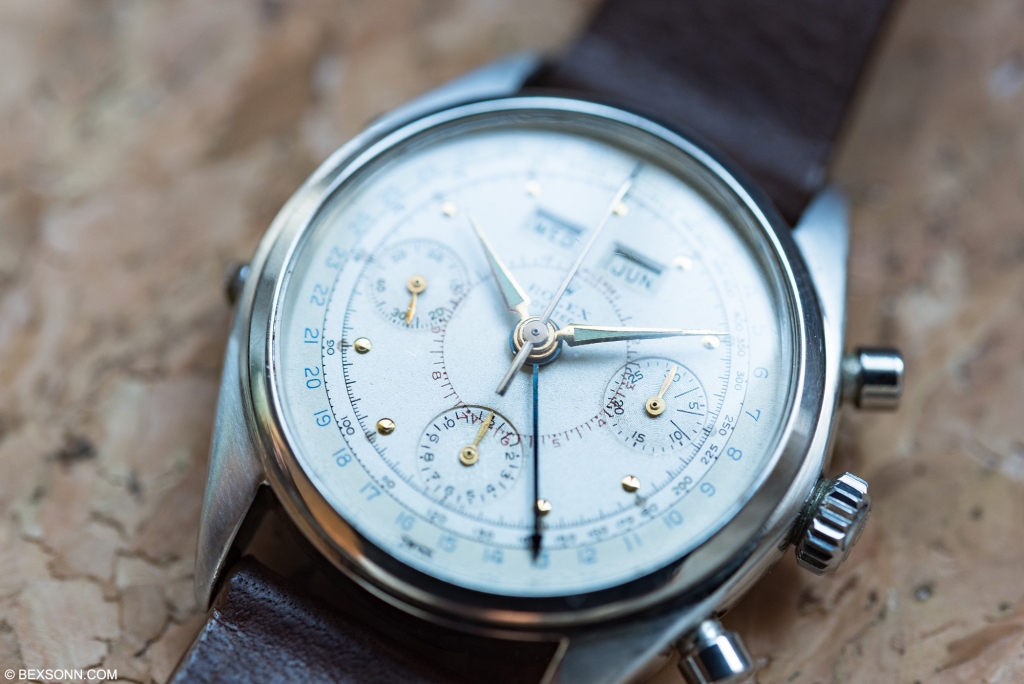 This 6036 has been consigned by the descendant of the original owner and moreover, it features design traits that I for one have never seen before. This 6036 example features small seconds, minutes and hour registers, similar to those seen on a 6234. But as well as featuring a tach-o-meter and calendar scale, it also sports an inner central telemetry track, printed slightly off-centre to accommodate the day and month apertures. It is thought that this 6036 may just be unique and was made by Rolex for one Leonard Shapiro, a well-respected New York jeweller who specialised in making jewellery from gold and platinum. This 6036 is a very interesting discovery and is one that will perhaps have collectors reaching for their paddles.

All in all, there is a very strong vintage showing here that caters for the growing vintage market in New York and America in general. There are many other pieces that though I didn’t highlight, I do think are interesting, including a Spillman case Universal Genève Compax and an Omega Railmaster/Flightmaster made for the Peruvian Air Force to name a few. I have no doubt that just like the vintage pieces in Geneva and Hong Kong, they will meet expectations.

For more lot information on Christie’s New York auction that will take place on the 6th of December, alongside part 4 of the Nautilus 40 sale, at the Rockefeller Plaza, New York, visit the official Christie’s website to view the entire catalogue.