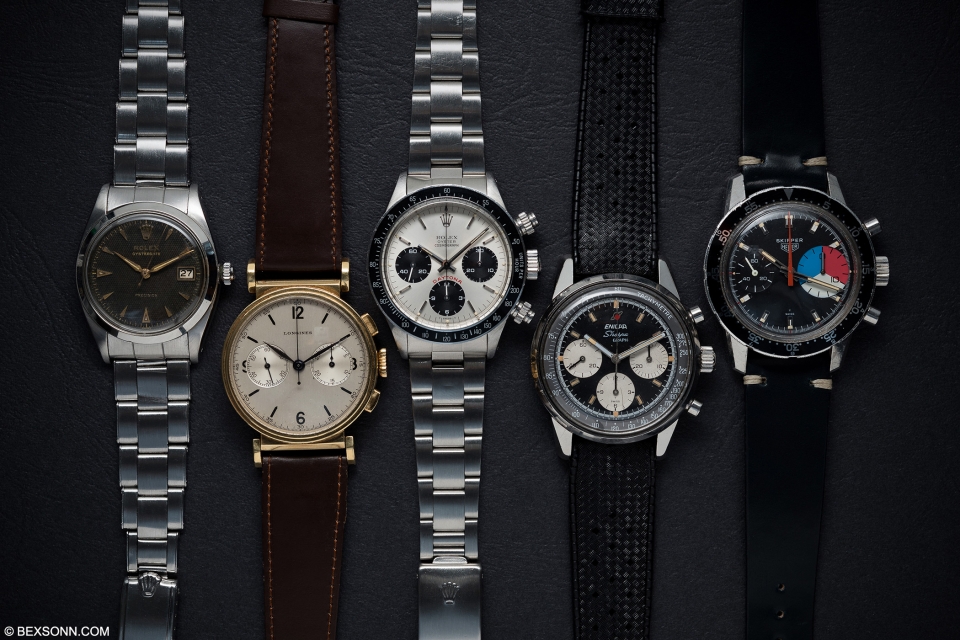 Feels strange to say it but we are heading towards the end of the year now and of course this means that the penultimate autumn Watches of Knightsbridge auction is upon us. While they may not have the gems that adorned the cover and many of their inner pages of their last auction, they still have many interesting and collectible pieces that are definitely worth mentioning. Last week we spent some time over at 64 Knightsbridge to get hands-on with some of the timepieces in the upcoming September auction on the 17th. As per usual we decided to pick out some of our highlighted lots and share our thoughts on them. 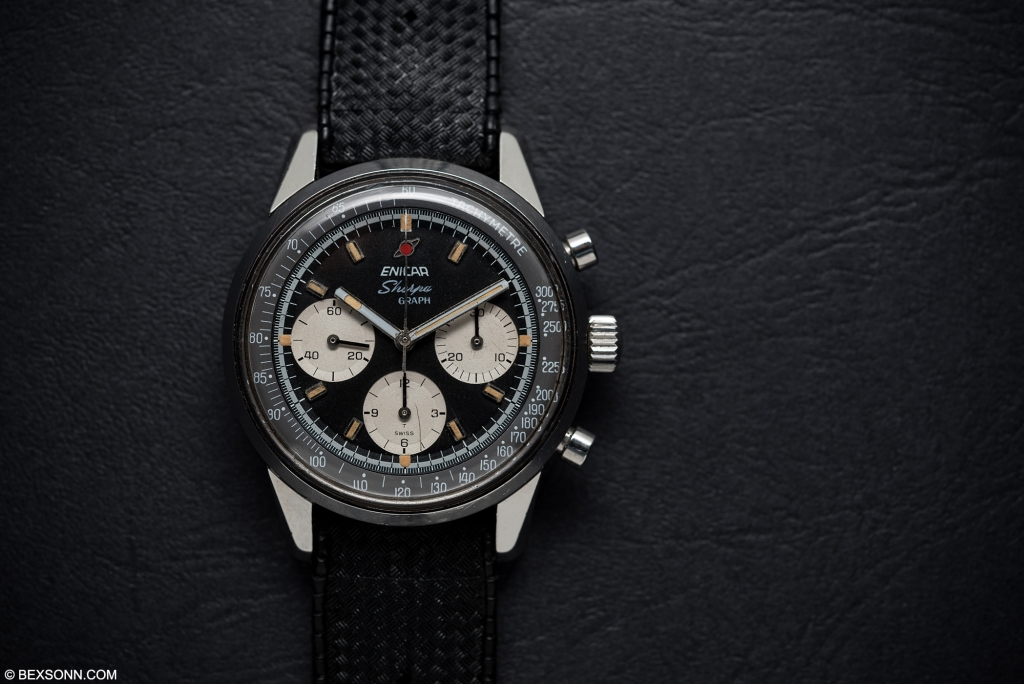 Lot 84: The Enicar Sherpa Graph is perhaps a chronograph timepiece that doesn’t immediately come to mind when thinking about iconic chronographs but believe me when I say it is a very special timepiece indeed. No doubt that many of you would’ve heard of famous, Scottish, formula 1 racing driver Jim Clark, who became a two-time F1 world champion and also an Indy 500 champion too. But unlike a lot of drivers from that era, Jim Clark actually had a real interest in wristwatches and was also seen donning chronographs for other watch brands at the time too. That said, Jim Clark was seen mostly wearing a Sherpa Graph and while he wore a slightly earlier model, which has different details, people still refer to these ones and later model because of the reverse panda dial. Simply put, Jim Clark and the Enicar Sherpa Graph association, is somewhat the same as Paul Newman and the Daytona. This particular Enicar Sherpa Graph features a black dial with inlaid luminous silver batons and matching hands, with three white registers, recording hours, minutes and continuous seconds – also referred to as ‘Reverse Panda dials’. It also features a grey inner tach-o-meter scale and a red lollipop seconds hand. Inside, is a heavily modified Valjoux calibre 72 manual wind chronograph movement, housed in a, large for the time, 40mm steel case. It comes on a black rubber strap, with its original crosshatched crown and the watch appears to be in really working good condition. 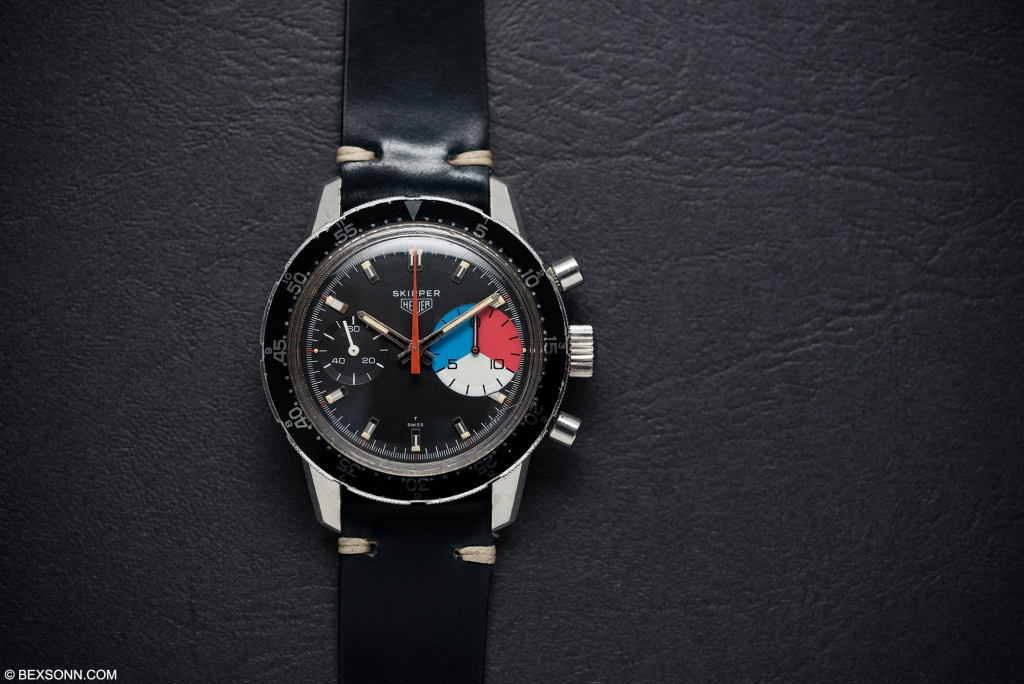 Lot 86: We’ve highlighted a few Heuer Autavia’s in the past and even highlighted a Mareographe from the last auction, which has its ties to the sea. The Skipper is a name mostly associated with Heuer and it was this name that distinguished their normal chronographs to their yachting chronographs. The special function on the Skipper, was the Regatta timer, evident in the tri-colour subsidiary dial that was used to time the countdown of 15 minutes the sailors have before they cross the starting line of a regatta. One of the first regatta timepieces made by Heuer was cased in a Carrera case reference 2447 but subsequently, all others used Autavia cases. And this ref. 7764 is one of the first in a long line spanning some 20 odd years but more interestingly, it is said that only very, very few were created during these years and this reference 7764 is amongst the rarest. This Autavia Skipper features a matte black dial with part luminous white inlaid silver batons and large 15-minute regatta countdown register, as well as a sub dial displaying continuous seconds. Inside is a Valjoux base calibre 7730, signed Heuer-Leonidas SA on the bridge. The case measures 41mm in diameter, which is stamped with a Autavia reference 7763 and comes on a blue leather Horween strap. 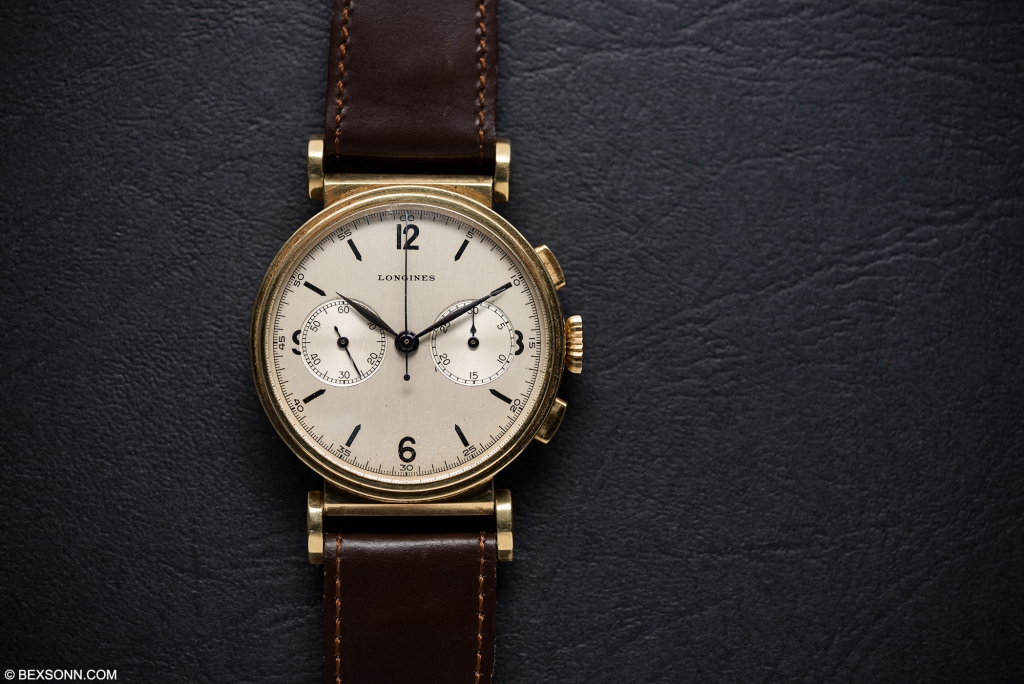 Lot 191: We’ve highlighted a few Longines chronographs before but none are more special than those that house the calibre 13ZN. You may or may not already know, that the Longines calibre 13ZN was first introduced in 1936 and because of its size, would prove to be rather useful to many pilot-type chronograph timepieces. Faithful to its name, the 13ZN also incorporates a ‘fly back’ mechanism, meaning that the chronograph function doesn’t require stopping before resetting it to zero. But above all of this, the calibre 13ZN not only is the part technologically but looks the part too; it is a beautiful movement that just oozes finesse, both in its design and finish. And to add to this, just look at the case this particular 13ZN has been housed in; it’s just pure elegance. This, 1936, 18-carat gold Longines 13ZN features a silver dial with black markers and Arabic numerals at 3, 6, 9 and 12 o’clock. Two subsidiary dials, recoding minutes and continuous seconds. This Longines 13ZN, sports a beautiful art deco case that is very in-keeping with the era in which it was produced, featuring articulated lugs and measuring just 37mm in diameter. 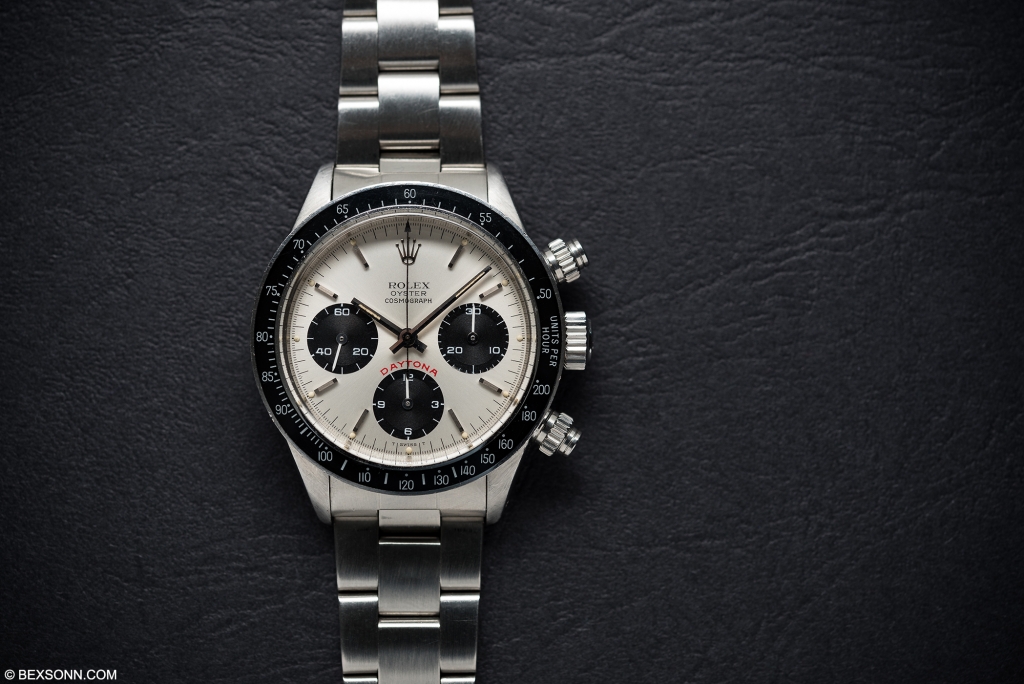 Lot 258: When tasked to think about the quintessential sports chronograph of the last 5 decades a few will come to mind but none are more iconic than the Rolex Daytona. The Dayton was introduced as a motorsport racing wristwatch. This is probably one of the truest forms of a Daytona and the fact it is a ‘Big Red’ makes it one of the most sought after vintage timepieces of the Rolex Cosmographs. It is water-resistant to Rolex standards but it is also manually wound making it inherently more accurate. I must admit, once you’ve seen one of these in the metal you’ll notice how much more modest and detailed the 6265 is over today’s current Daytona. It’s just a simple, no fuss, no bling sports chronograph. This 1978 Rolex Oyster Cosmograph Daytona has the same case diameter of 37mm as its predecessor (6241) however, it is fitted with screw down chronograph pushers and the movement is also based on the reliable Valjoux 72, the Rolex 727. This 6265 has been fitted with a black (6263) Bakelite bezel, which remains intact and in good condition. It sports a silver dial, with three black sub dials, also known as a ‘Panda dial’ by collectors for obvious reasons, with aged tritium dots which appear in order. 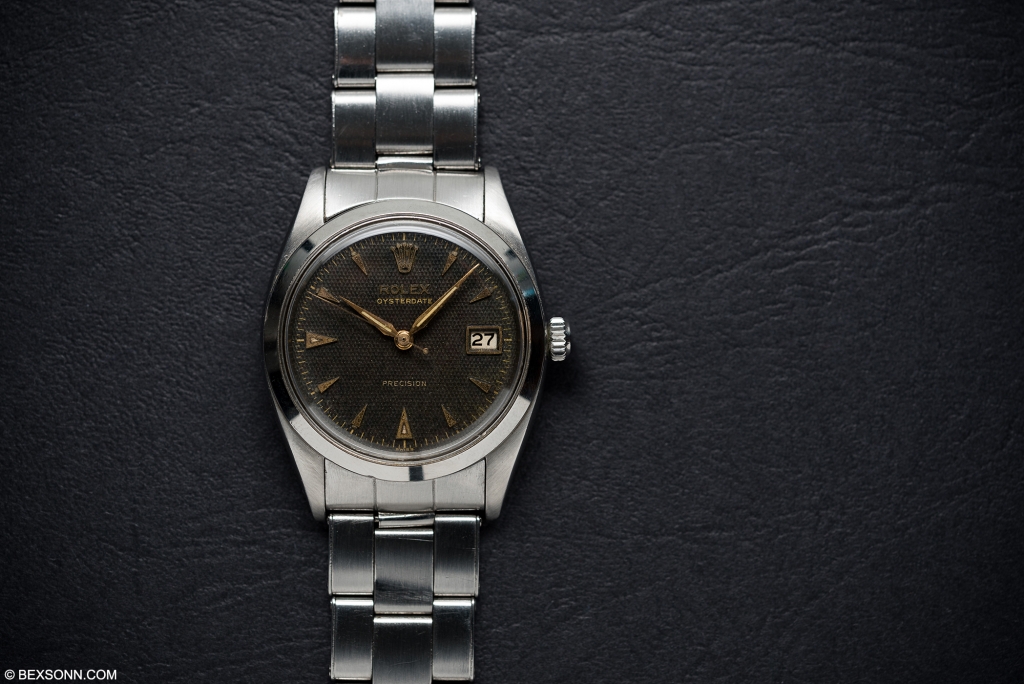 Lot 303: It may seem rather strange that we’ve chosen to highlight a Oysterdate Precision but let’s just say I truly believe far too often these pieces are overlooked in favour of Datejust’s. This particular example is, arguably, more attractive than a Datejust. This reference 6494, is one of the earlier Oysterdate Precision’s and as you can clearly see, its design is simple, minimalistic but above all, clean. This particular Oysterdate features a black honeycomb dial, which has turned to a ‘tropical’ brown hue. It sports gilt dagger batons and hands, as well as gilt font and minute track. The date window is nicely outlined in gilt and features a black and red ‘roulette’ date wheel. Housed in this 35mm case is the Rolex calibre 1210 manual-wind movement, which comes on riveted Oyster bracelet. I think it’s important to add that any Rolex sports model featuring a honeycomb dial, immediately demands a premium, so it will be interesting to see how this one performs.

The Watches of Knightsbridge auction will take place on the 17th September 2016, make sure you visit the official website for this month’s full catalogue.