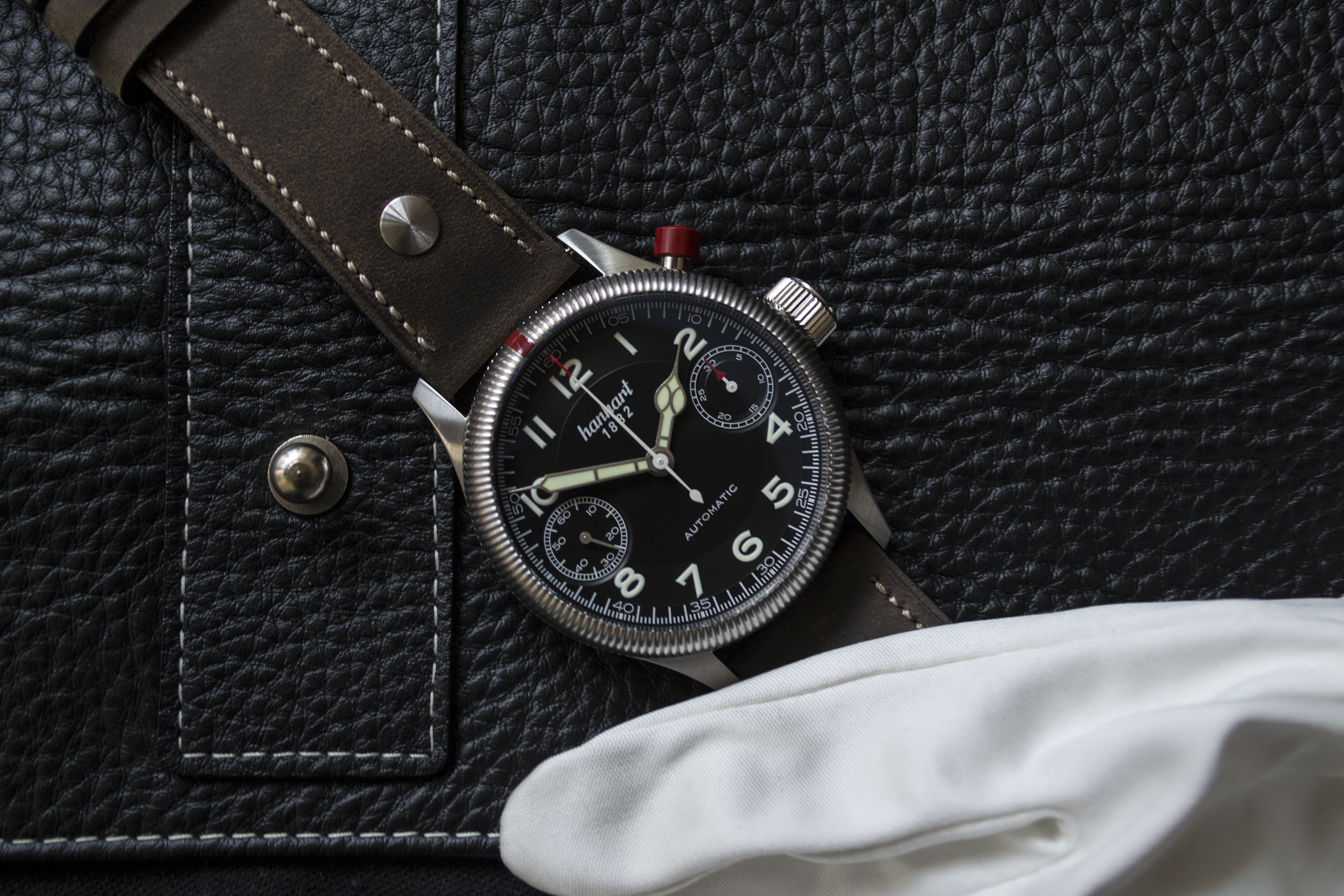 Hanhart Pioneer MonoScope “Mono-Pusher Chronograph” Ref: 733.210-001: For those of you who are unaware of Hanhart, I shall touch on a brief bit of history of the Swiss-German watch manufacturing company – that only last year celebrated its 130th anniversary. 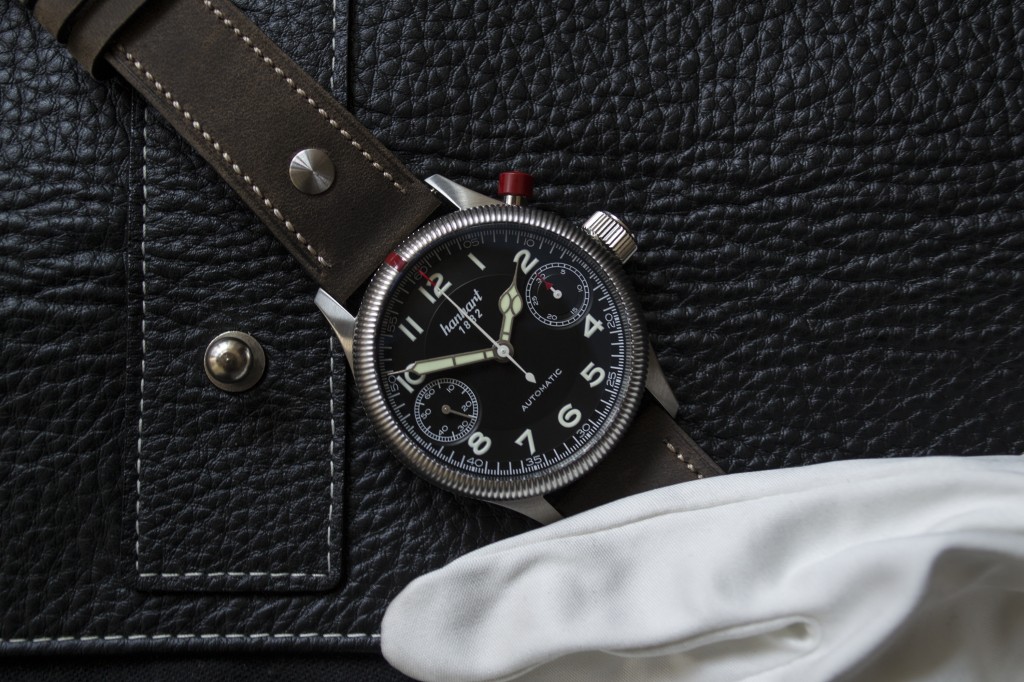 Hanhart has been producing timepieces since 1882 and have been a leading force, particularly in the wristwatch chronograph area. Development of these types of wristwatches began in response to the military requirements in the last third of the 19th century and the early decades of the 20th century. Hanhart was one of the first manufacturers producing pilot’s chronographs containing a movement with column wheel (which must be said, was quite state-of-the-art back then). As a pioneer in this area, the Hanhart manufactory in Gütenbach introduced the first German-made pilot’s chronographs not to be fitted with a pocket watch movement. Hanhart’s timepieces featured its own Calibre 40 and Calibre 41 movements, newly designed entirely from scratch. These timepieces had a significant impact on both the technological and aesthetic development of the pilot’s chronograph.

Moving onto the timepiece itself. This is the Hanhart Pioneer MonoScope “Mono-Pusher Chronograph” (released in 2012).  I must admit, at first, I wasn’t too into the looks of it but after some considerable wrist-time – it grew on me, greatly! The 45mm x 16mm brushed stainless steel case design is quite imposing but it doesn’t feel that large once it’s on your wrist. The classic pilot’s design case gives it a very sleek look and the fluted rotating bezel with matching crown definitely adds to the effect. 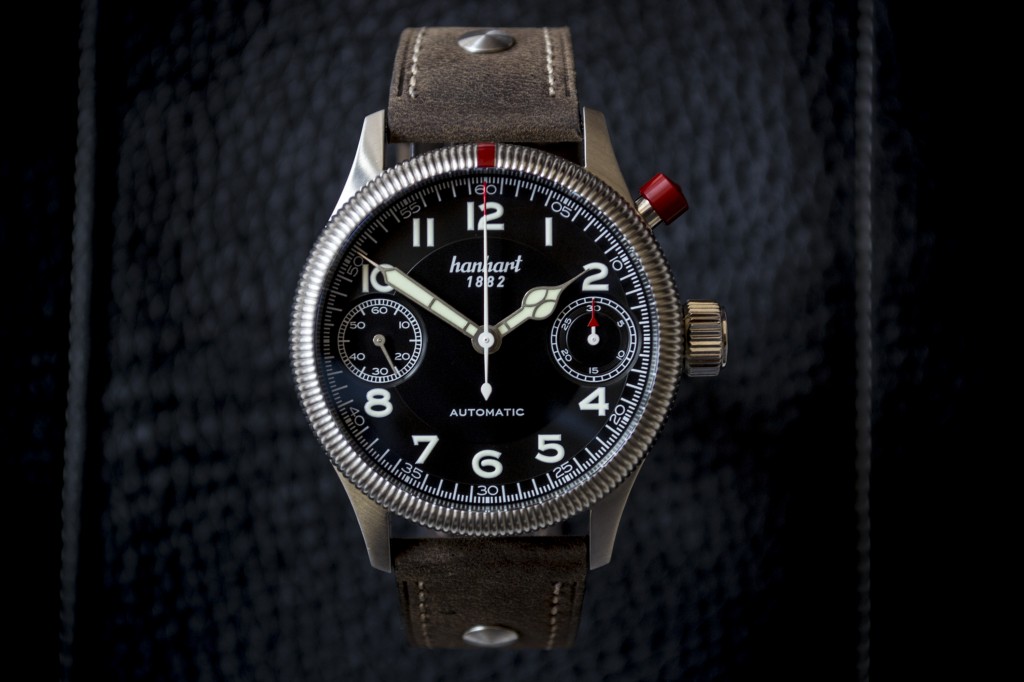 The Red Button: Legend has it, that a pilot placed a kiss lovingly on her brow as she slept before quietly leaving the apartment. As he looked at his Hanhart watch in the hangar, a smile flitted over his lips: she had painted the button with her red nail varnish so that he would think of her always and return safe and sound…. Hmm, not so sure any man nowadays would take so kindly to his missus defacing his watch with her nail polish…?! 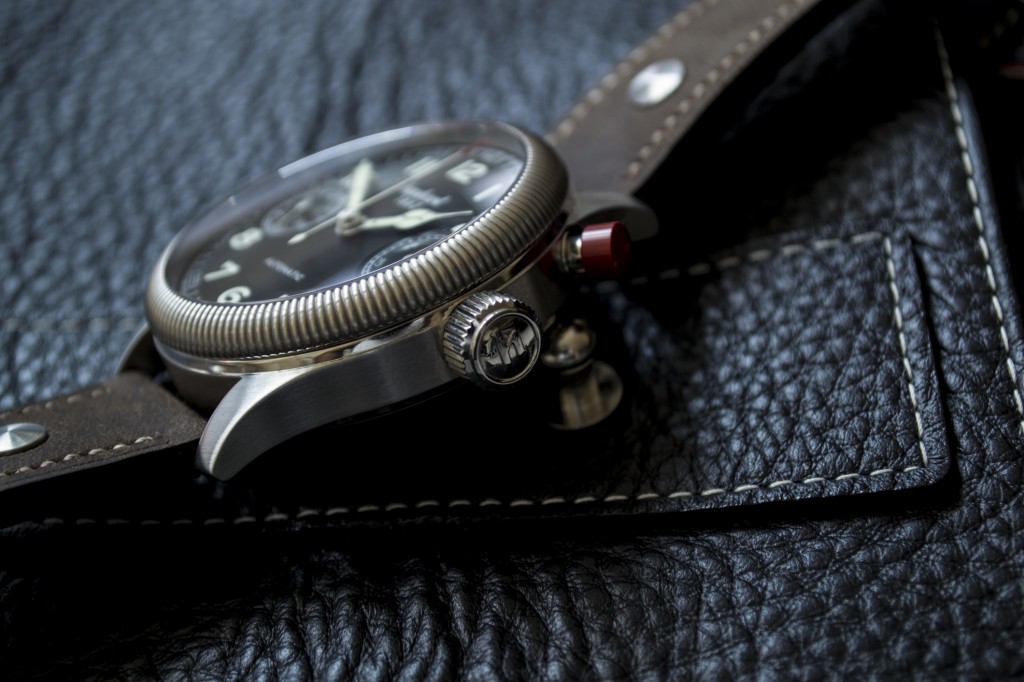 As for the dial, which is covered by a convex sapphire glass (anti-reflective on both sides), you’ve just got to love its classical look. It would be what every pilot would need – a large and legible luminous Arabic type dial. The striking feature of this dial is the bi-compax arrangement of the two sub-dial displays at 3 o’clock and 9 o’clock, the placement of them right on the edge makes it look clean, simple and uncluttered. I absolutely love the different textures and layers of this dial, not to mention the luminous (serpent shaped) cathedral hour and minute hands. Along with the red tipped chrono 30-minute sub-dial indicator and seconds hand – which adds much more character to this timepiece. 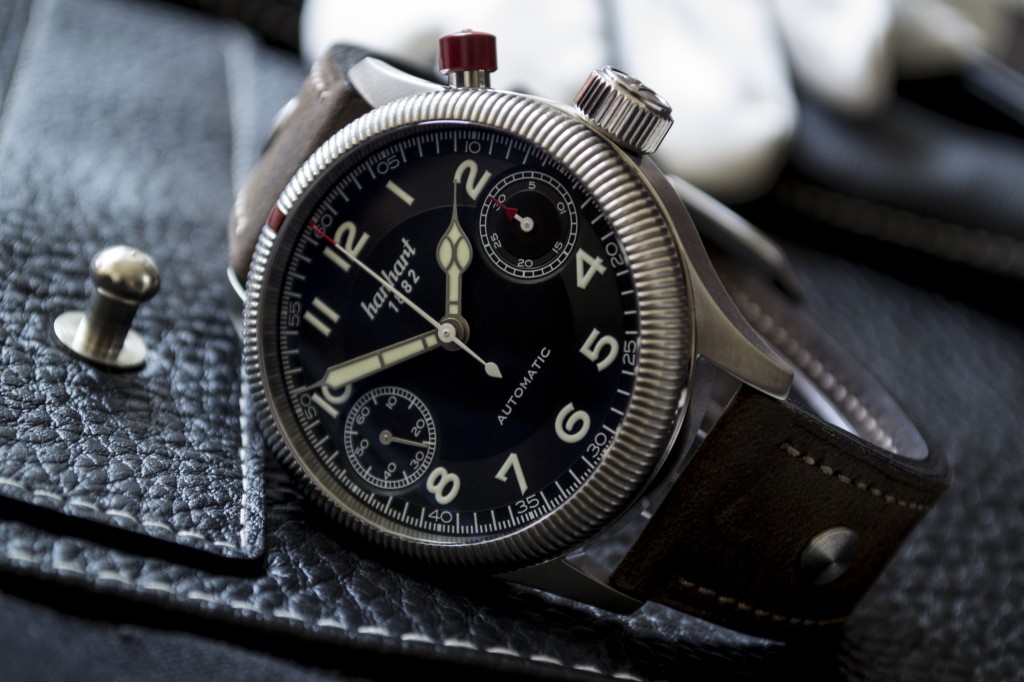 Inside the case is a HAN4212 (based on an ETA/Valjoux 7750) modified automatic chronograph movement (bi-compax), with exclusive module, increased crown-to-button and single-button conversion. Containing 31 jewels and with a power reserve of 42 hours.  The chrono mono-pusher is crisp and clean, requiring a modest bit of pressure to bring it to life. 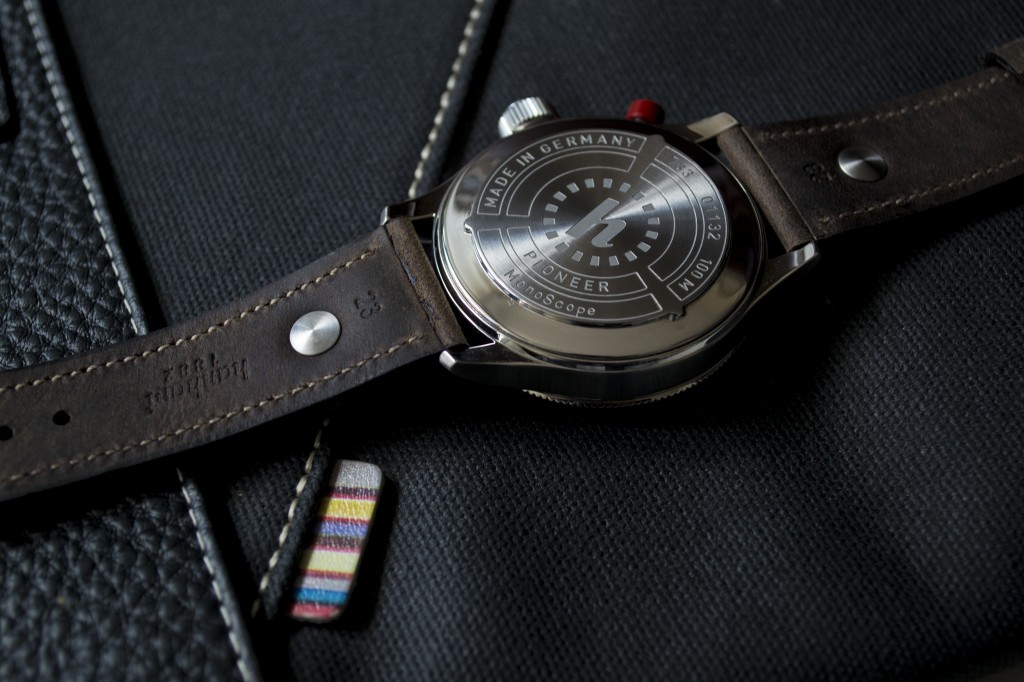 In all honesty the strap was probably the one thing I loved straight away. Instantly it had a well-worn feeling, which is surely down to it being beautifully constructed out of calfskin. This definitely lends to the comfort of wearing it. 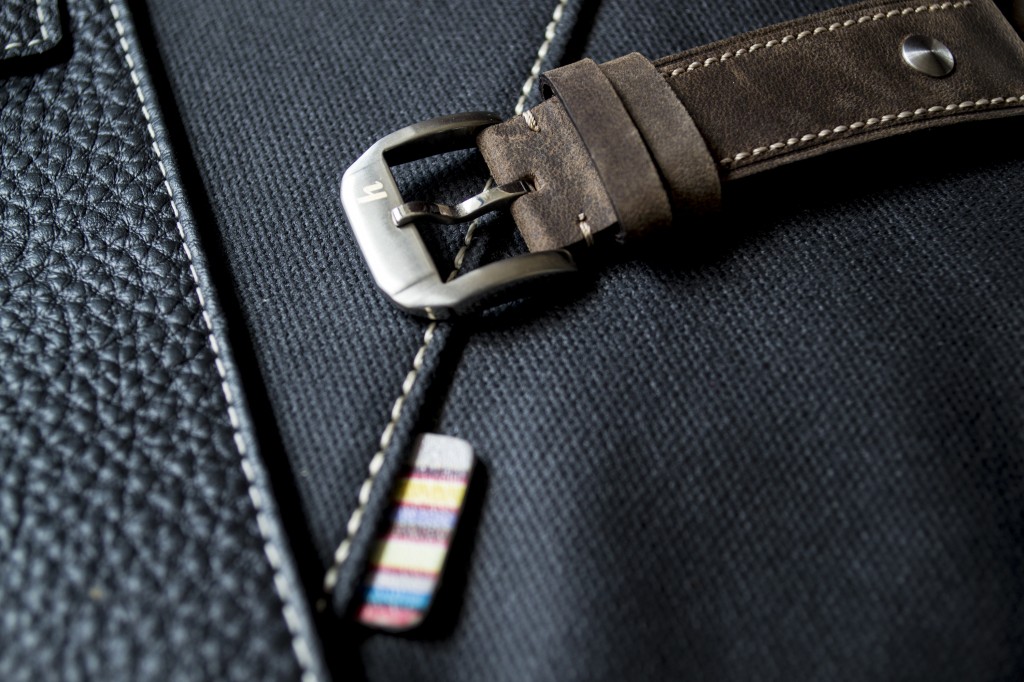 This Hanhart Pioneer MonoScope is priced at £4,530 and is quite versatile too. It can be worn with a suit and also just as easily with casual attire. For me however, if I were planning to purchase one of these Hanhart timepieces – I’d have to go for its smaller brother, the Pioneer MkI. For more info on this Pioneer MonoScope check out the official Hanhart website.