Hands-on with the Urwerk UR-210 Red Gold 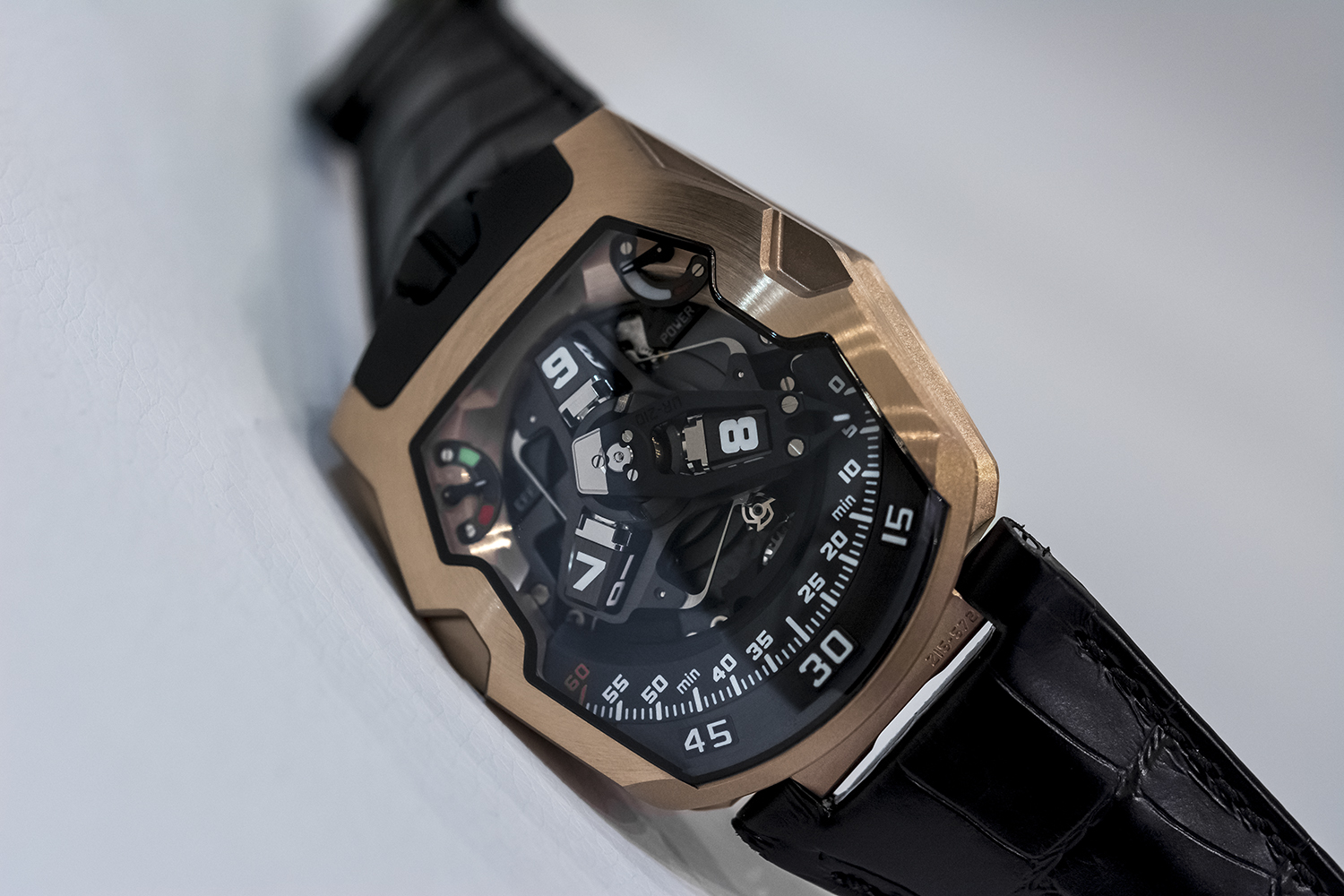 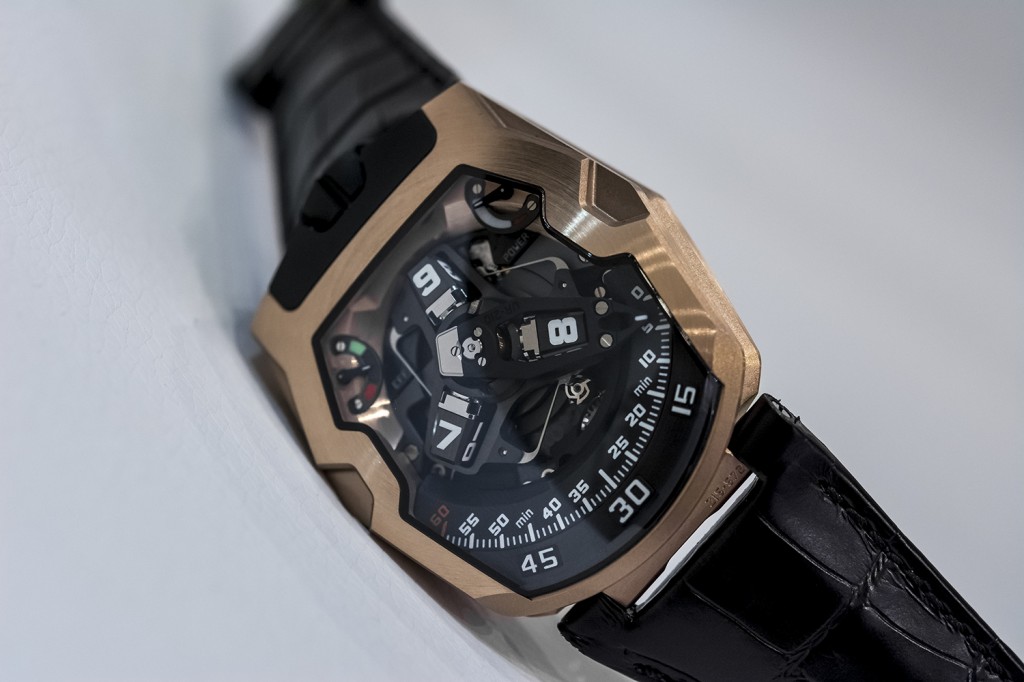 Urwerk UR-210 RG: A few weeks back at Salon QP we managed to get our hands on the EMC but we also found time to get our hands on the UR-210, nicknamed the “Maltese Falcon” because of the shape of the minutes hand.  Probably the most intriguing fact about this timepiece is that it has a mechanism (“winding efficiency indicator”) that tells you if you’re being active enough – sounds rather controversial, doesn’t it?

We did an article a little while ago about the UR-110 nicknamed the “Torpedo.” And we loved the shape, dimensions, the layout of the dial and just how futuristic it looked. What is instantly noticeable about the UR-210, is how more open the dial is and just how more wearable it appeared but still had all of Urwerk’s technical excellence and this in my opinion is what Urwerk is all about. 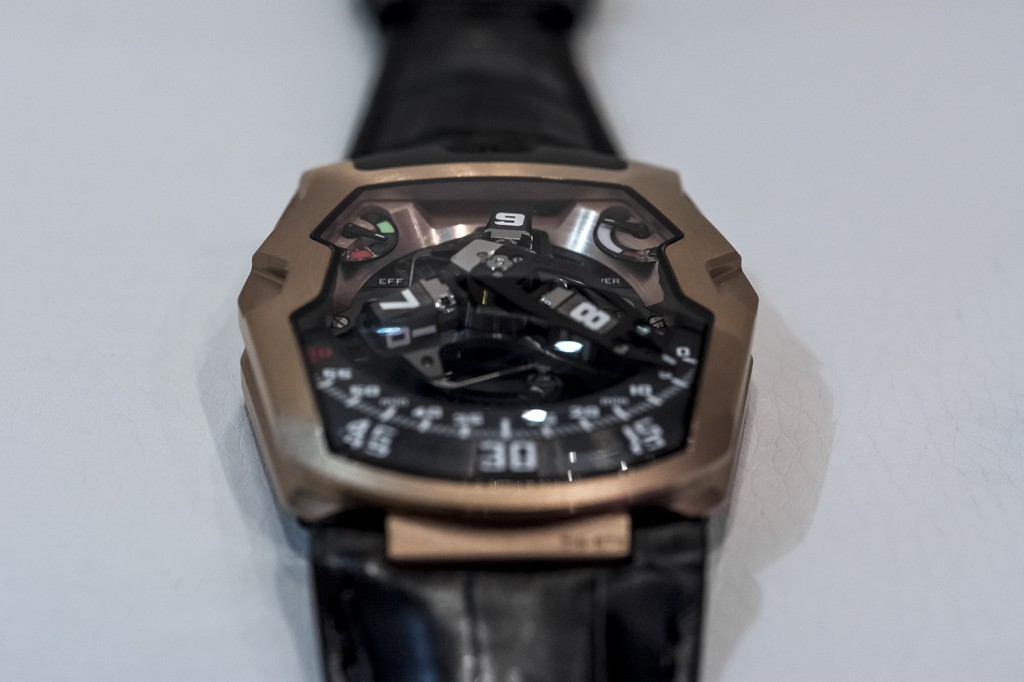 The UR-210 features a satellite complication with retrograde minutes using Urwerk’s UR-7.10 Caliber. The principal feature is a high-tech, oversized, three-dimensional retrograde minute hand. Its function is to enclose the hour satellite and indicate the time as it transverses the 0-to-60-minute scale. This one-hour journey through time, tracing an arc of 120°, is smooth and fluid. However, the true nature of the piece is revealed at the end of the 59th minute. A sharp distinct “click” signals the return of the minute hand to its starting point. In less than 0.1 of a second the hand flies back to dock with the next hour satellite. It is literally mechanical poetry in motion! 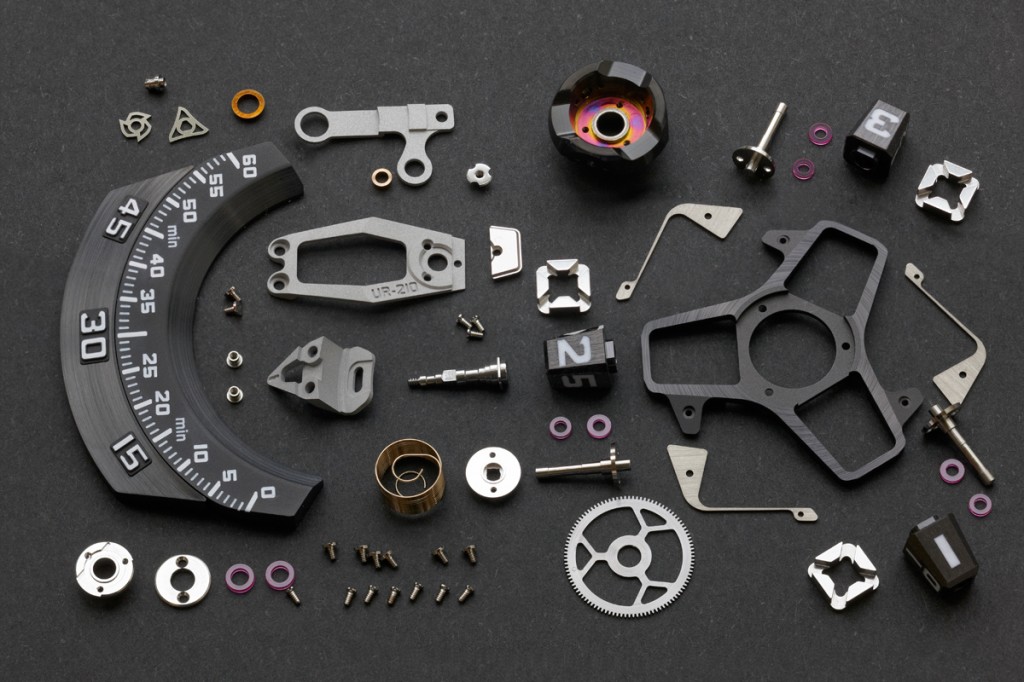 In the top right-hand corner is the power reserve gauge and in the top left-hand corner of the dial is the efficiency gauge. Now, you would have thought that this is probably a nice little gauge the timepiece could probably have done without but lets put this in a bit of perspective. We know the UR-210 is an automatic timepiece but you don’t see the rotor, this is because it is hidden.  You do see a pair of turbine shaped gears that turn with the rotor. You’ll notice that on the rear of the watch is a selector wheel. Using your thumb you can switch it to “Full, Reduced, and Stop.” These either allow the rotor to fully spin, spin with some resistance, or be locked. 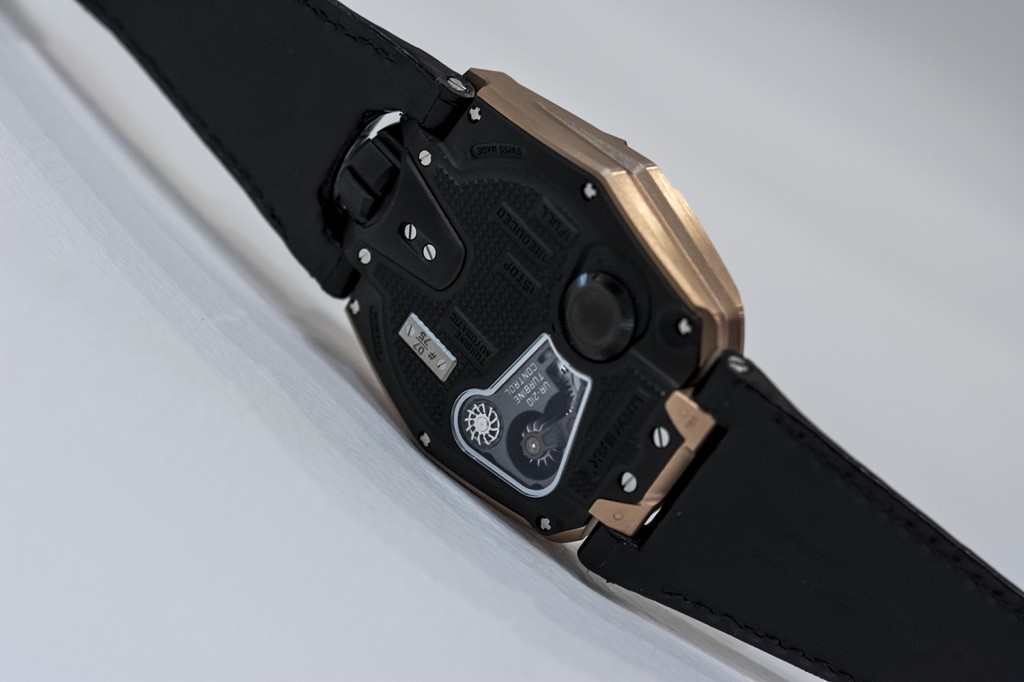 An automatic winding system is inherently weak and during shock or extreme forces it can malfunction. Urwerk have integrated a system to negate this effect. By turning the selector into Stop mode, this will stop the automatic rotor winding and will protect the movement during rigorous sport activities. Turning the selector to “Reduced” slows down the winding rotor (which is part of the “Turbine Control” system). The efficiency of the spinning engages an extra gear and slows down the winding. This is more useful when you want to protect movement while engaging in less rigorous sport activities. The rest of the time you can keep it on “Full.”

Having a power reserve indicator makes the “stop” function for the Turbine Control system more practical. So, the efficiency indicator is designed to be like a 2nd power reserve indicator. It remembers how much winding you have given the UR-210’s movement in the last two-hour period and this is indicated on a scale from red to green, displaying just how much love you’ve given the mainspring barrel. 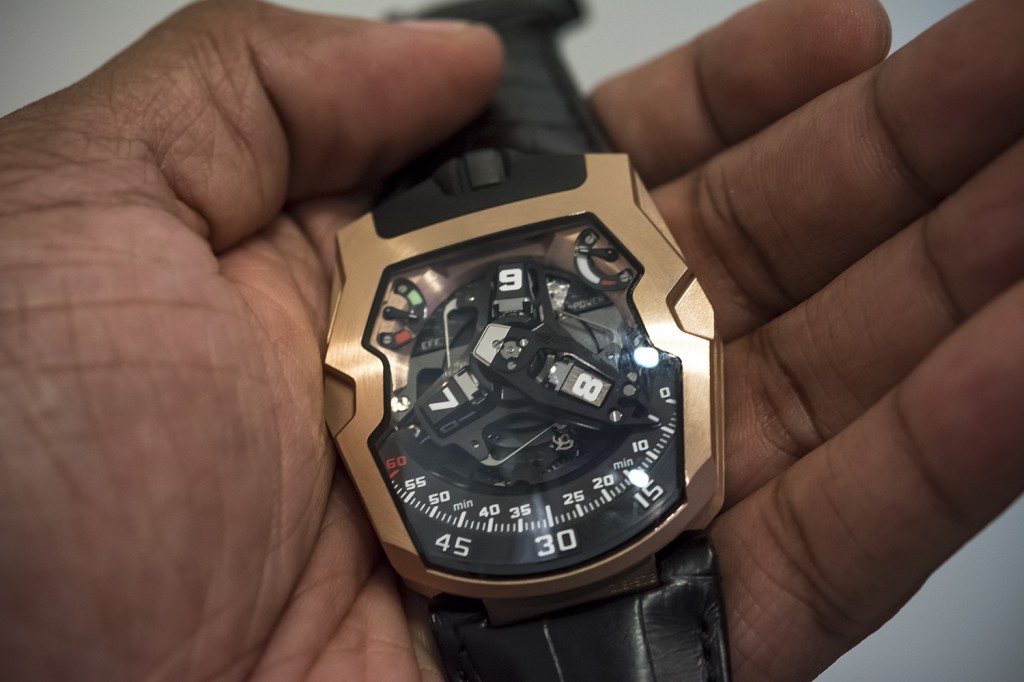 As for the case, this particular model is made out of a combination of Red-gold and Titanium. I must admit I’ve definitely warmed to the idea of owning a red-gold timepiece – especially when they look as cool as this. The case measures 43.8mm x 53.6mm x 17.8mm. This sounds quite large but actually, it is rather wearable and comfortable on the wrist.