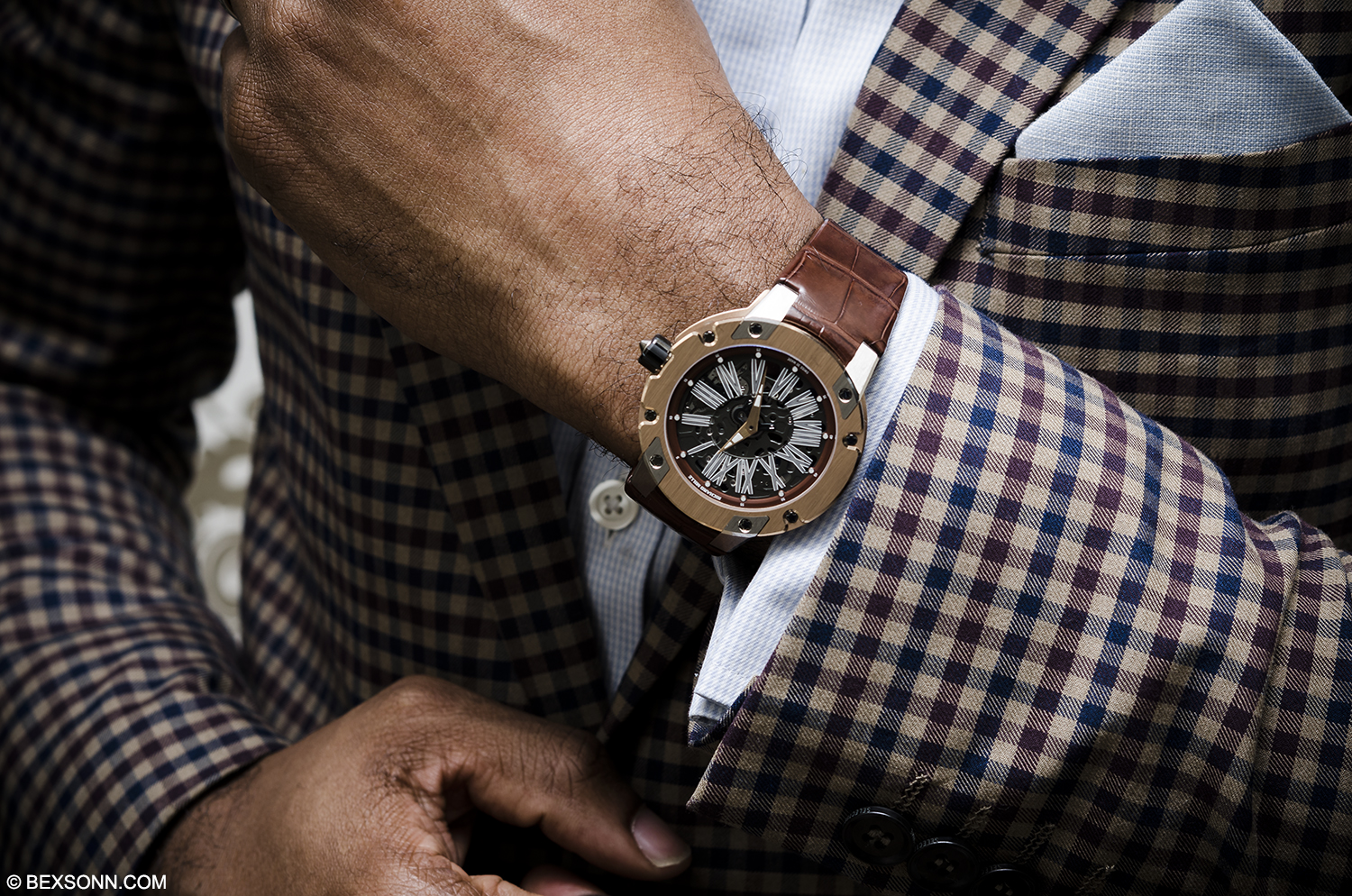 A couple of months back we were lucky enough to get our hands on this Richard Mille RM033 extra flat. There are a lot of Richard Mille timepieces, which we are in fact big fans of, yet because of the sheer bulkiness and ostentatious pieces that are produced, I personally just couldn’t see myself wearing one. But as the saying goes, horses for courses and in fact in this case it is very true. You see, this RM033 extra flat is probably the only Richard Mille I could ever see myself wearing and truth be told, I did for a good few weeks.

Richard Mille are known for creating curvaceous, tonneau-shaped wristwatches with unbelievable exposed and minimalistic movements; when seen in the flesh you’ll feel as though you are peering into a highly tuned racing car engine. Now if you were not aware, many of Richard Mille’s timepieces are fabricated by none other than Audemars Piguet’s Renaud et Papi division, to Richard Mille’s specification, which combines the highest levels of watchmaking, traditional hand decoration and finishing that results in some truly breathtaking timepieces. 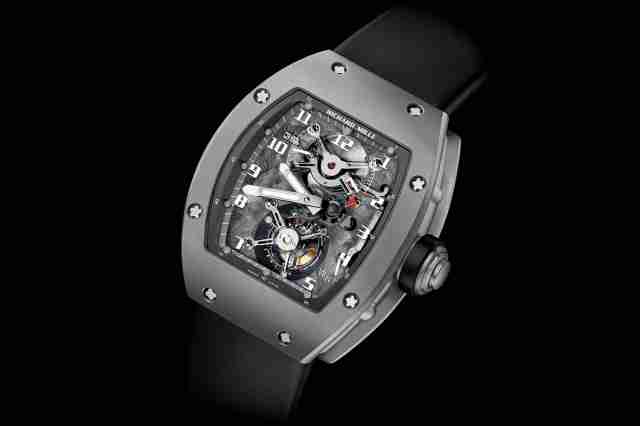 While Richard Mille does seek to create beautiful timepieces they are by no means created for the sake of high-end luxury wrist-candy. The brands development of watches that are built around modular constructions with built-in shock absorptions means that their timepieces are made to be worn in extreme conditions when and wherever possible. 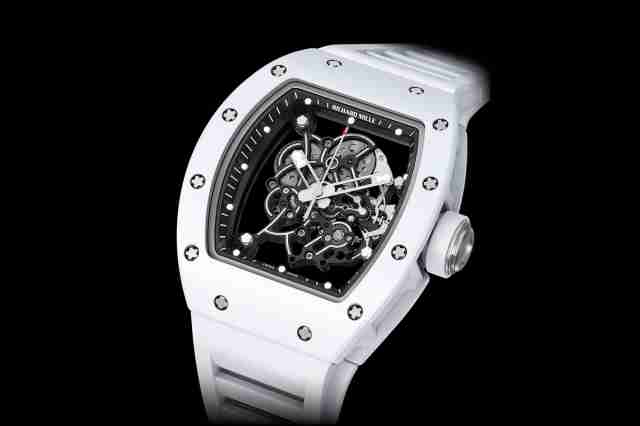 Now, most watch brands recommend you against wearing your mechanical wristwatch when playing sports, due to the watch succumbing to high amounts of shock but even more so, imagine that wristwatch has a tourbillon…? Not Richard Mille. We’ve seen them on the wrists of Rafael Nadal and Bubba Watson, both of which have played in world-class tennis and golf tournaments respectively. Felipe Massa was even wearing an RM 006 when he slammed into a protective tyre barrier at 120 mph while qualifying for the 2009 Hungary Grand Prix. He suffered severe head injuries and almost died. However, the watch was fine. 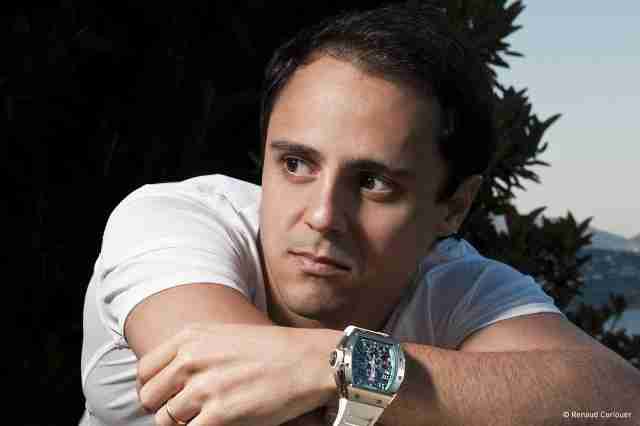 Though Richard Mille is a young brand (founded in 2001) it has achieved some impressive awards in the world of haute horology and you can see why, considering their innovative and thoughtful designs. But for a long time Richard Mille only housed movements in tonneau-shaped cases, however, in 2007 this changed. First there were rectangular shaped cases (RM 016) then the more traditional round shaped cases, which included chronograph and diver pieces. And though case shapes changed by no means were they intended to be dress watches as they were still produced to be worn in extreme circumstances – so most still sported the large and not so versatile cases, until the introduction of the RM 033 Extra Flat.

In 2011, Richard Mille introduced the more versatile watch, the Extra Flat RM 033. The round case design of the RM 033 measures 45.70 mm x a mere 6.30 mm in thickness, making it their thinnest wristwatch to date. The thing is when you write down the diameter of the RM 033 it still sounds and is quite large, and for me at least upwards of 42mm starts to enter a realm of rather large for the wrist even though mine do measure a reasonable 7 inches. 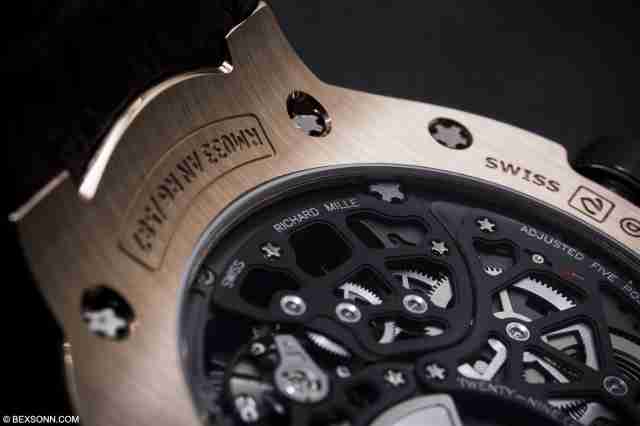 The case features a curving case back which has become a trademark of the entire Richard Mille collection and this detail has been well thought out. It allows the timepiece to fit snuggly onto your wrist with minimal or no discomfort at all. But this is also due to the fact that the curved lugs have actually been integrated into the case. The lugs are actually fixed in place by 8x Spline screws, of which 4 can be seen on the front of the case and 4 on the case back and according to Richard Mille the lugs have actually been attached in this way for easy replacement in case of damage.

This tripartite case is water-resistant to 30 meters, ensured by two nitrile O-ring seals. It is assembled with 16 spline screws in grade 5 titanium and abrasion resistant washers in 316L stainless steel. This particular RM 033 is made of a combination of rose gold and titanium which has been finely brushed vertically on all sections. Though the construction does make for a stunning looking timepiece some of the edges are quite sharp. 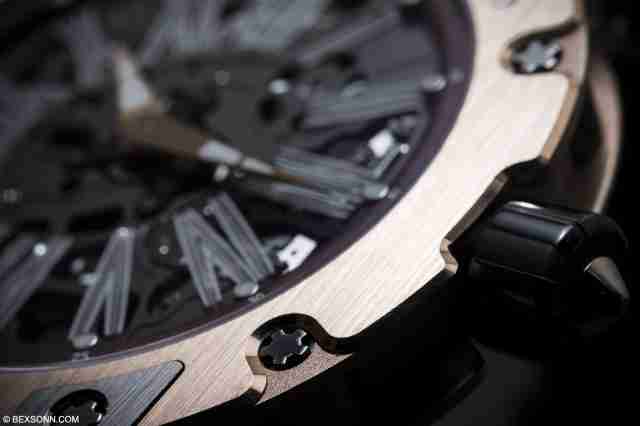 The RM 033 dial is very intriguing even though it is a very simple time only wristwatch. The dial is covered by anti-glare sapphire crystal, where you will see 12 stylised Roman numeral markers placed on another piece of sapphire crystal which has a slanted oval-shaped cut out. On the outer carbon fibre ring you’ll see luminous dot makers and at 12 o’clock the small inscription of ‘RICHARD MILLE’. The hands on this particular model are made of 18 carat brushed rose gold and feature triangular-shaped luminous. The largely fluted crown is made from ceramic and sealed with double seal O-rings. 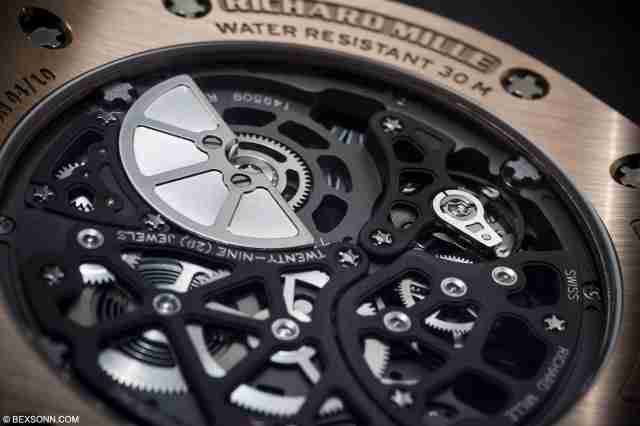 The movement: the mechanical engine that makes this extra-thin Richard Mille wristwatch possible. The caliber RMXP1  self-winding movement measures a mere 2.6 millimetres thick and features a decentralised bi-directional rotor, that has been designed to offer perfect weight distribution as well as efficiency in winding, not to mention compact dimensions of the extra flat skeletonised movement. As mentioned above that APRP make most of Richard Mille’s movements, they also employ other manufacturers to do so too and in the case of this RMXP1, the base caliber is manufactured by Vaucher to Richard Mille’s specification (in the image below, if you look closely underneath the rotor, you’ll see the Vaucher emblem). 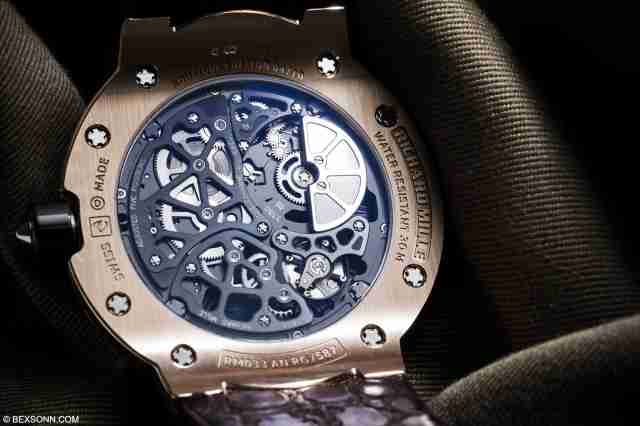 The caliber RMXP1, with 29 jewels and beating at 3Hz, has a free sprung balance with variable inertia, which allows for greater timekeeping accuracy. For the creation of the RMXP1 caliber, the baseplate, bridges and balance cock are made of titanium. The baseplate made from grade 5 titanium is coated with Titalyt®, which is a treatment that protects it from corrosion and increases its hardness. The black PVD coating for the bridges allows the entire ultra-thin assembly to be given great rigidity, as well as precise surface flatness which is essential for the perfect functioning of the gear train as well as stability of the movement. Through the sapphire crystal case back you’ll see some beautiful contrasting shades of grey, which creates depth and works very well with the rose gold. 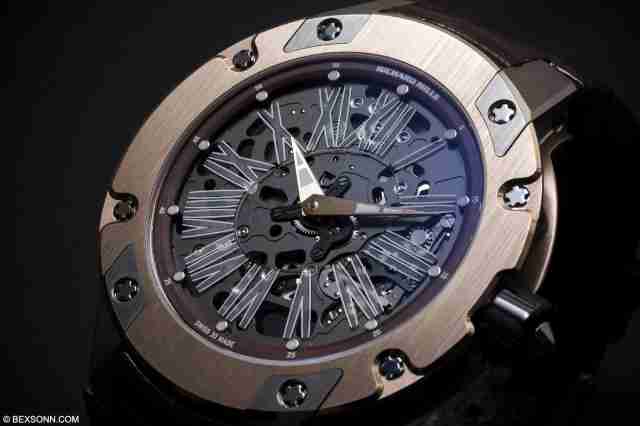 As mentioned before there is an extensive use of spline screws; on the outside you’ll be able to see another four large screws and these fix the movement to the case in conjunction with the nitrile O-rings, as mentioned above – this increases the RM 033’s shock-resistance.

Conclusion: The RM 033 that I managed to get my hands on was the rose gold and titanium boutique only limited edition and this one came equipped with leather alligator straps, which in admission were a little rigid. I can’t help but think it would’ve been a little bit more comfortable on a nice supple rubber strap, though it may have looked a bit out-of-place with the rose gold? One other thing that quite surprised me was how unexpectedly noisy the automatic winding-rotor was but I must admit, it did become slightly less noticeable over time. Make no mistake this is an absolutely incredible wristwatch which was an utter joy to wear and probably one of the nicest things about it, is that no one really notices you’re wearing a timepiece worth upwards of £100,000 on your wrist, that can be worn with formal, casual or sporty attire. These traits alone easily makes it the most versatile Richard Mille on the market to date in my opinion. 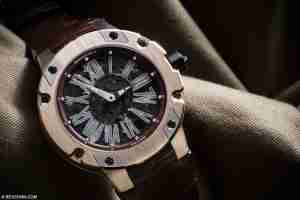 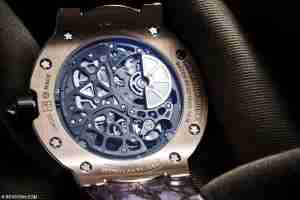 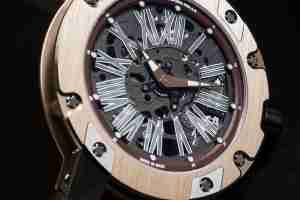 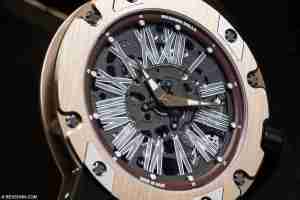 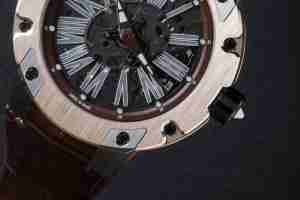 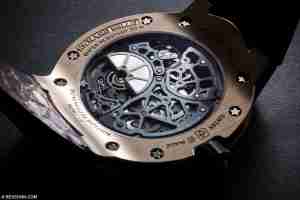 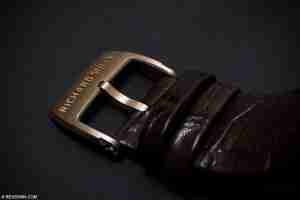 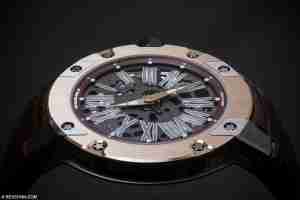 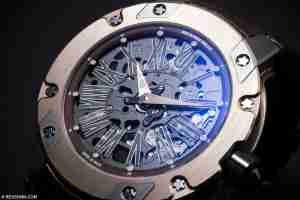 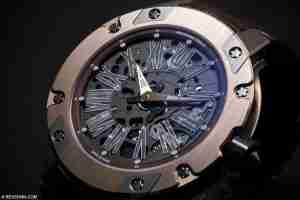 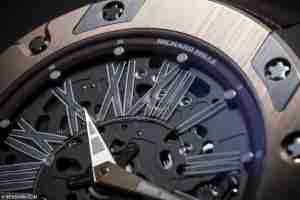 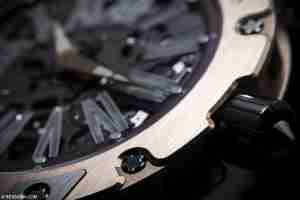 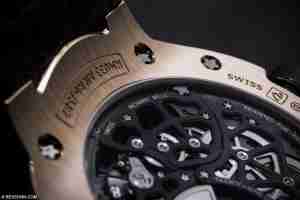 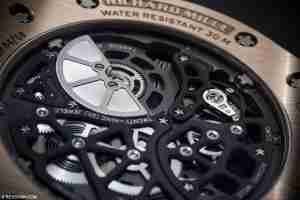 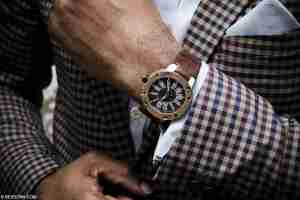