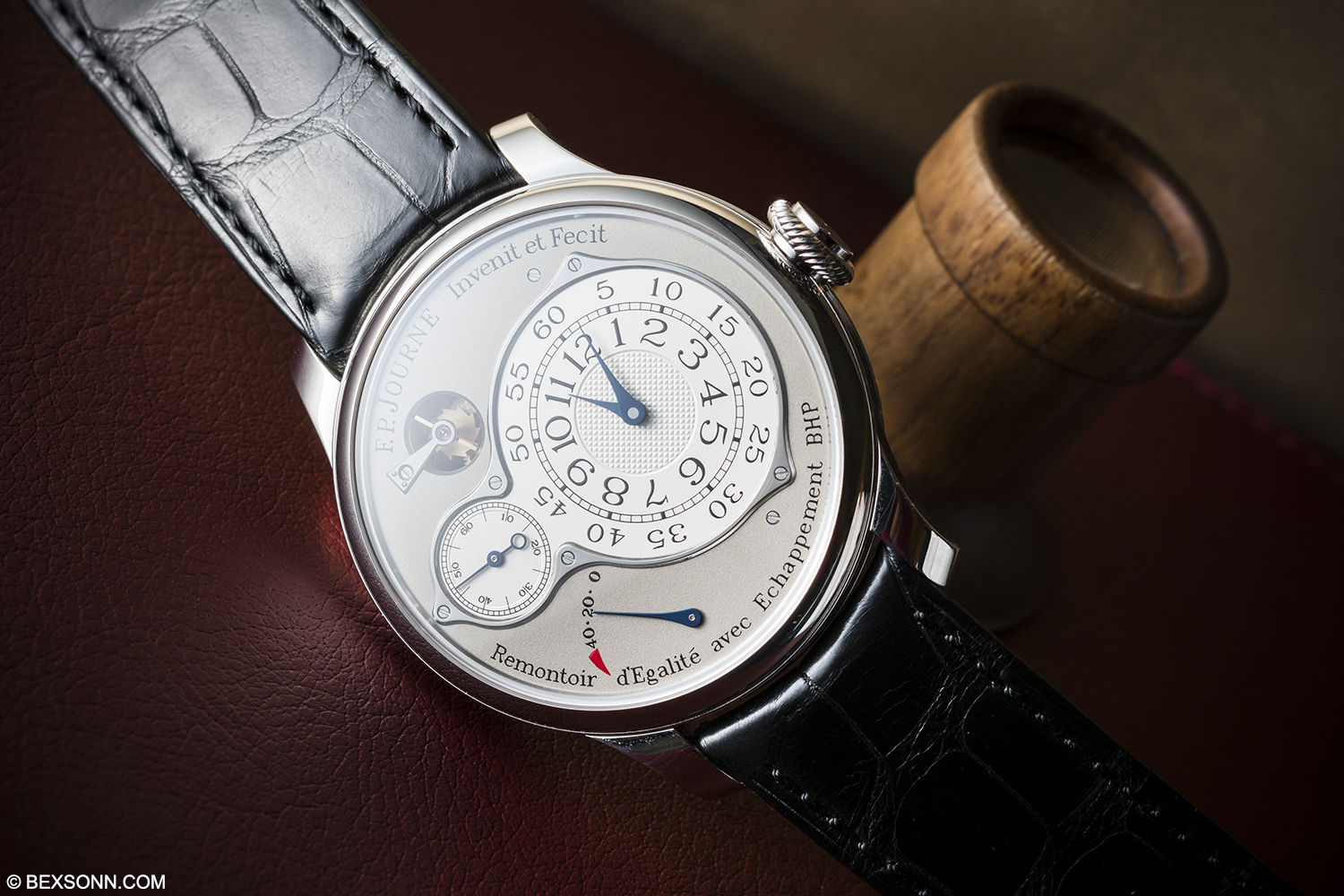 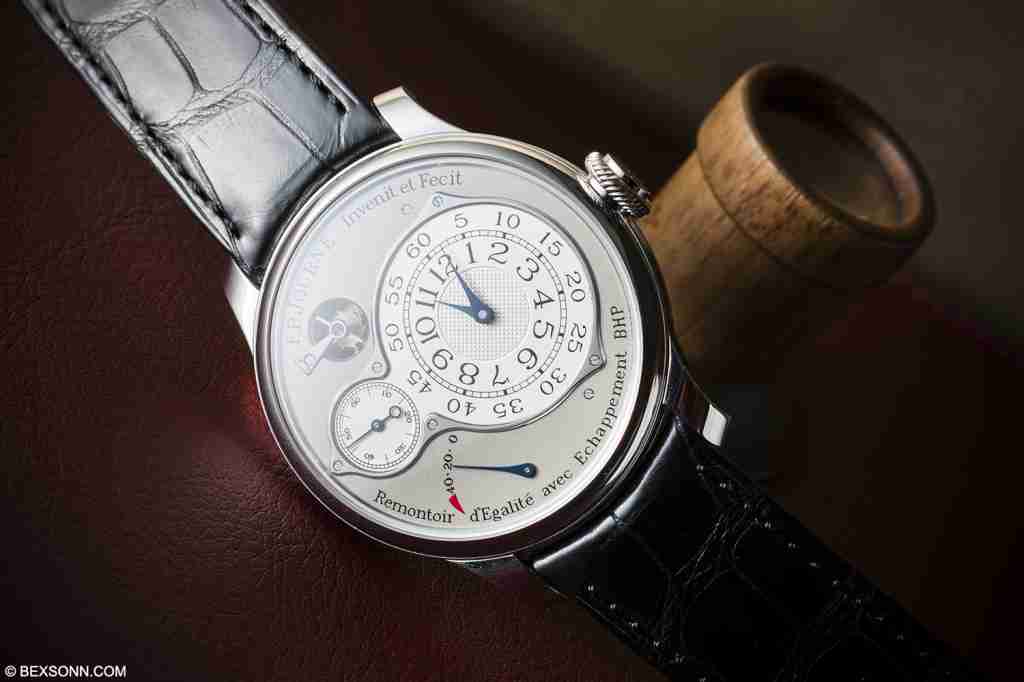 F.P. Journe Chronometre Optimum: F.P. Journe, where do you start? Mention the name F.P. Journe to any WIS (Watch Idiot Savant) and their ears will prick up and their eyes will be filled with glee and their lips will moisten. Why you may ask? Well, F.P. Journe in my opinion creates some of the most exquisite timepieces in the world today. This is not hyperbole; I really do mean it. Avid watch collectors and enthusiasts absolutely adore F.P. Journe but I feel that not very often do people really look into what he has created and his philosophies, admittedly I’m guilty of that too. Until now I hadn’t really delved into the world of F.P. Journe and the 15-year-old manufacture that produces less than 900 pieces per year. But slowly as I start to research and read what he has done, only now can I really begin to admire what François-Paul Journe has accomplished.

It is accepted that in this day in age modern machinery must be used to adhere to supply and demand, and while Journe utilises these methods he also strongly believes to achieve great Haute Horlogerie in the world of watchmaking things must be done the old-fashioned way, that being by hand. Having completely immersed himself into “the golden age of watchmaking”: the 18th century, with the likes of Abraham-Louis Breguet, Antide Janiver and other master-watchmakers from this era, François-Paul studied what they had created using what they had at their disposal. And you can see when you look at the Chronometre Optimum these practises honed have been utilised. 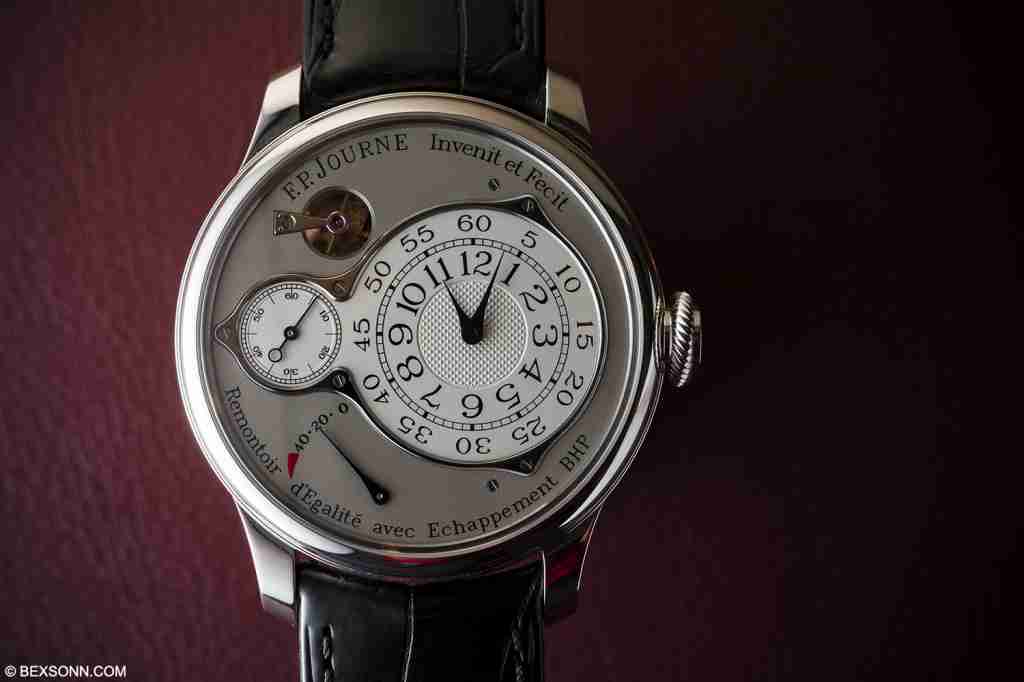 The Optimum is the end product of a long career in watchmaking and a piece which Mr. Journe himself refers to as the ultimate chronometer. The Chronometre Optimum was actually designed in 2001 and inspired the 2004 Tourbillon Souverain with Dead Beat Seconds but due to François-Paul’s busy watchmaking schedule he wasn’t able to produce the Optimum until 2012. Journe’s number one goal was to make a watch with less internal friction, a constant force on the escapement to ensure equal distribution and an escapement without lubrication to ensure stability. In the 18th century there were several lubricant free escapements, such as the Robin escapement or Breguet’s natural escapement but none of these are suitable for wristwatches. 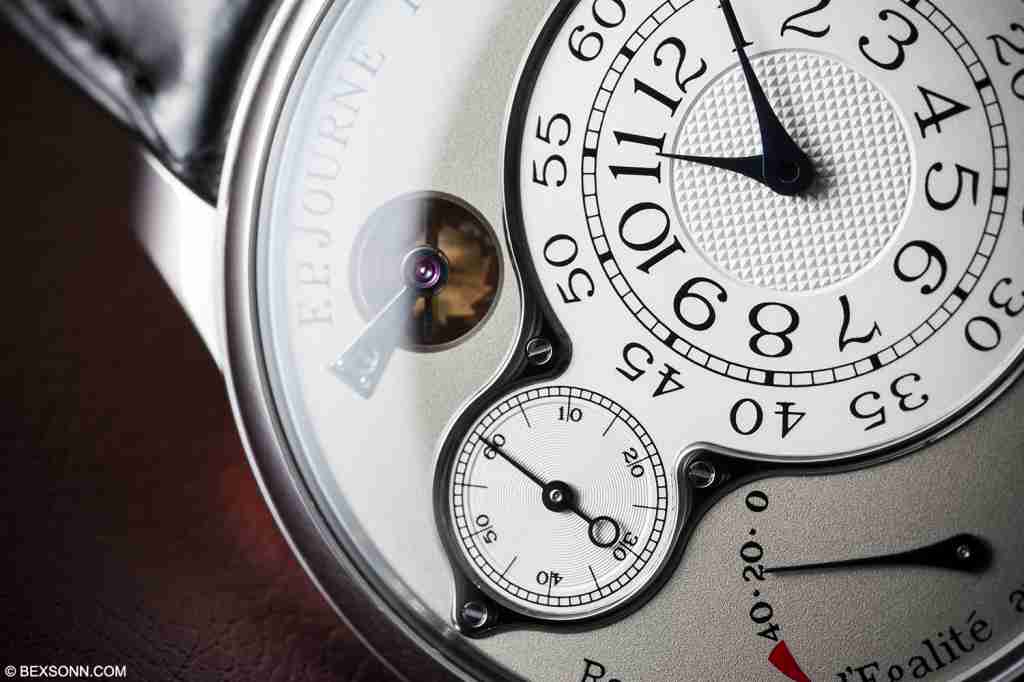 As a base the Optimum uses the double barrel from the Chronometre Souverain, with its two springs that ensures the stability of the driving force of this movement, emblematically made of 18-carat rose gold, and also less friction on the main gear. The patented remontoire d’Egalite, is a small wheel that creates the constant-force applied to the escapement to make it constant, it stores and releases energy to smooth out fluctuations in the power transferred. The effects of the remontoire d’Egalite can been seen through an aperture on the dial between 10 and 11 o’clock. However, this remontoire for the first time is made of titanium, which maintains its balance in different positions, for greater efficiency. 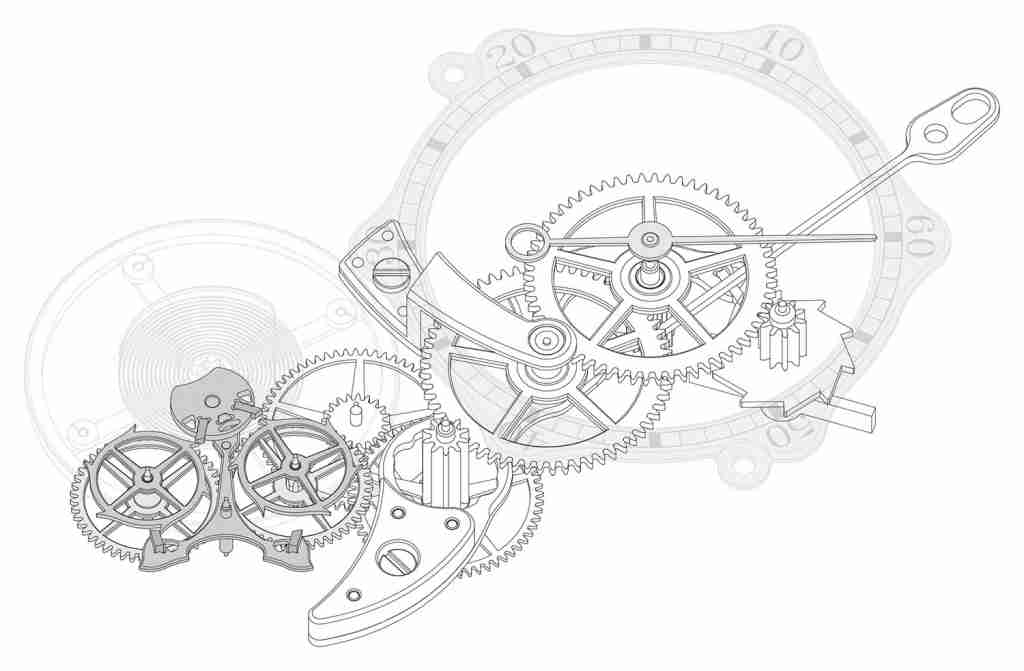 Then there is also the use of the (EBHP) High-Performance Bi-axial Escapement, which has also been patented. You see François-Paul thought about making a simple chronometer, he wanted to achieve precision and knew when lubricants start to dry up the performance of the timepiece was effected, so he wanted to eliminate the use of lubricants. To combat this Journe used a traditional method, a two-wheel direct impulse escapement that functions without the need of any oil. This divides the pressure on the escapement wheels but also has far greater output than the majority of escapements: 50 hours without loss of amplitude. 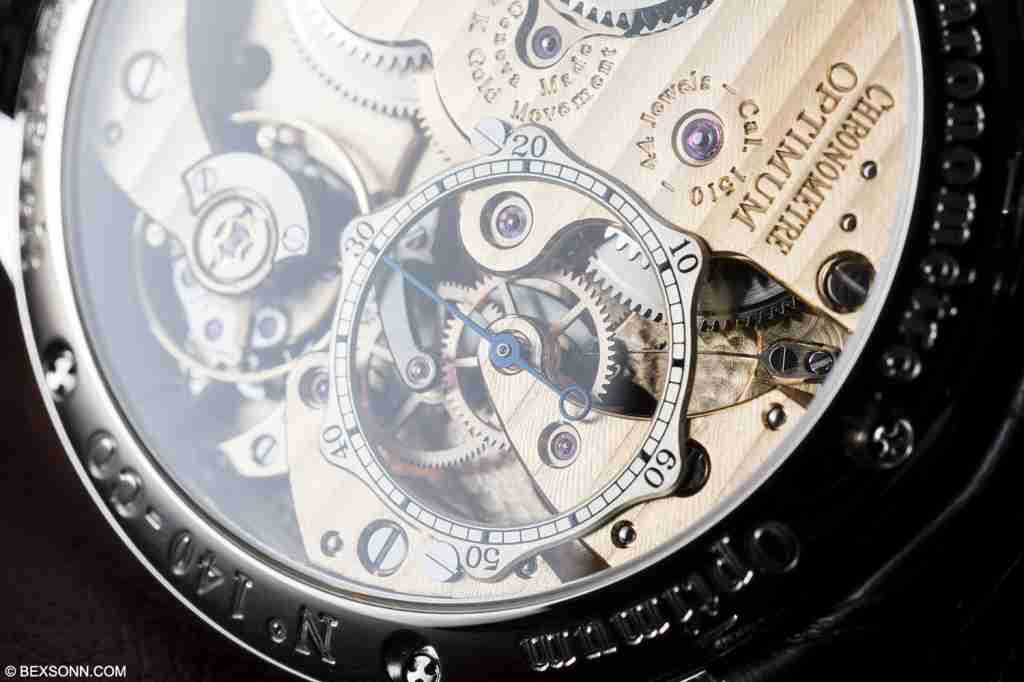 So we know the Chronomètre Optimum encompasses a majority of exceptional components brought together for the first time in one watch: two barrels in parallel, the constant-force remontoire, the new EBHP revolutionary escapement, and the natural dead beat second. But the Optimum is of course a piece that is elegant and also very wearable on its alligator strap, though some may see it as being a bit on the large size for a dress watch due its maximum case size of 42mm. 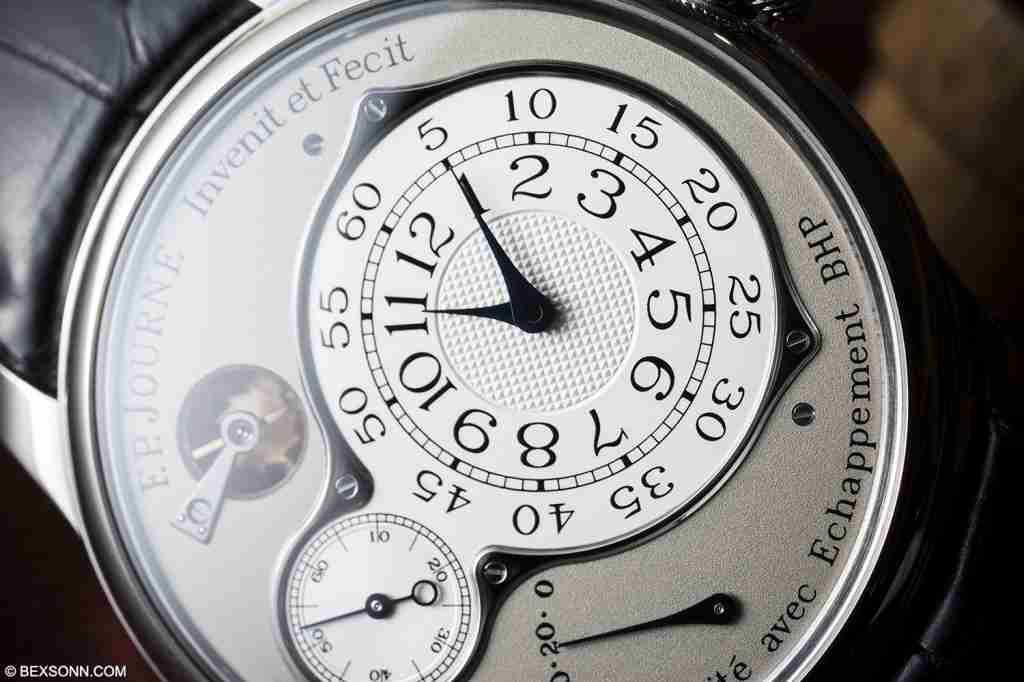 This particular case is made from platinum and features a beautiful knurled crown – which reminds of a bollard with a docked boats rope wrapped around it – with sapphire crystal. The time is displayed via two off centre concentric circles split by a railroad track with the minutes displayed on the outer circle and hours displayed on the inner, and the very centre guilloched with clous de Paris. A small sweeping engine-turned second’s subsidiary dial sits to the left at 9 o’clock. Also on the dial is the power reserve gauge just below the second’s sub dial. 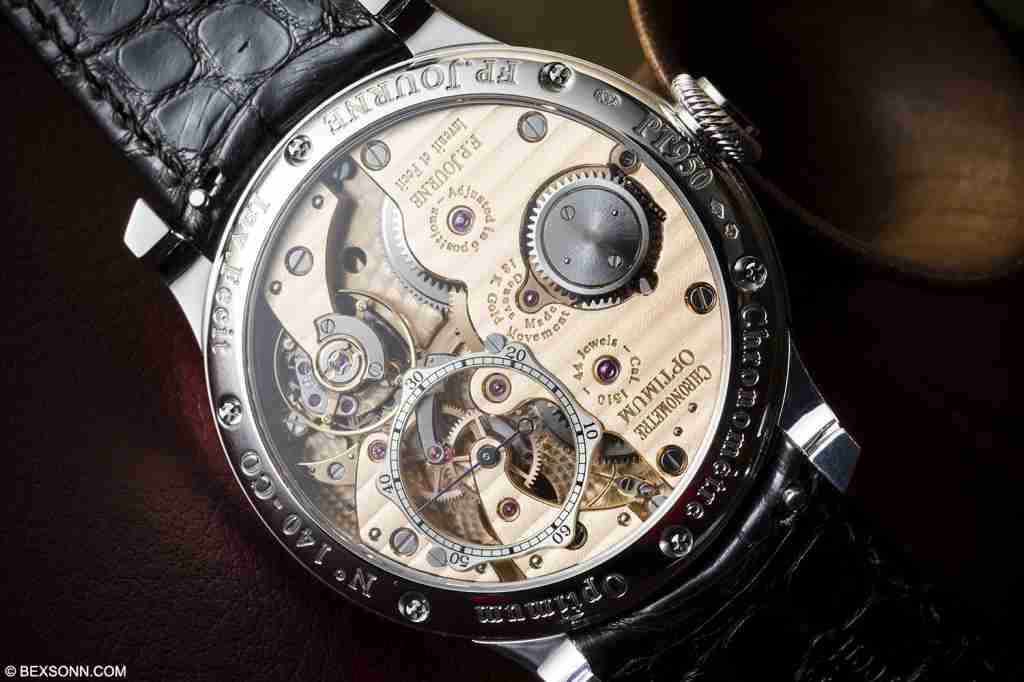 Turning the Optimum over and looking through the sapphire case back, you’ll be able to see the beautifully finished 18-carat gold calibre 1510 movement that features circular graining on the baseplate, Geneva waves on the bridges and you’ll also be able to see another effect of the remontoire – the natural dead beat seconds that actually ticks in the opposite direction. 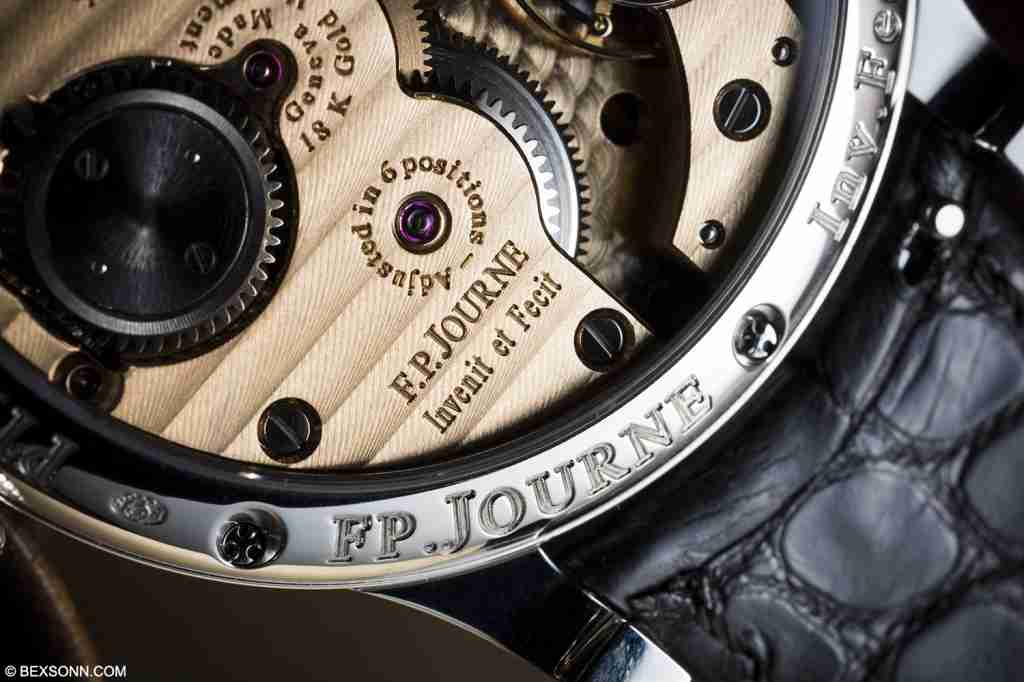 The way in which François-Paul Journe has gone about making this timepiece has to be commended, his watchmaking philosophy is to make watches that will still work in 200 years. Those made 200 years ago are still in working order today (if they have been maintained regularly). It is for this reason that he only uses solid materials that have proven their worth rather than modern materials that will probably be unable to be repaired in a few decades. It is philosophies like this that make F.P. Journe haute horlogerie pieces so adored by collectors and so revered throughout the watchmaking industry.

For more information on the Chronometre Optimum, visit the official F.P. Journe website. 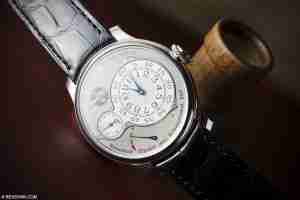 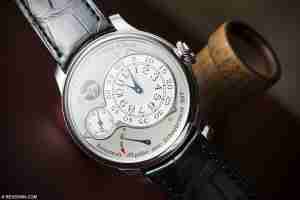 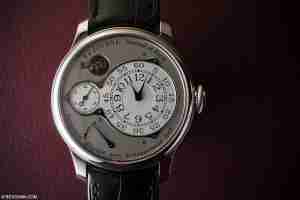 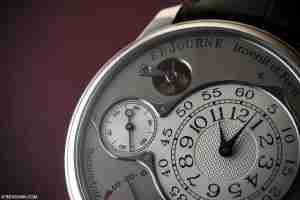 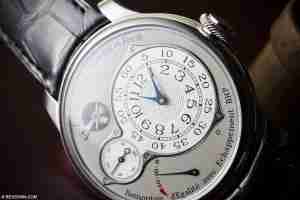 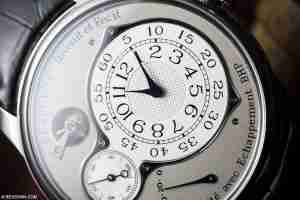 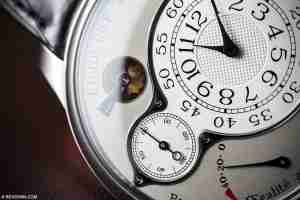 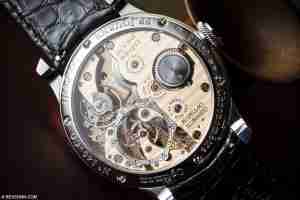 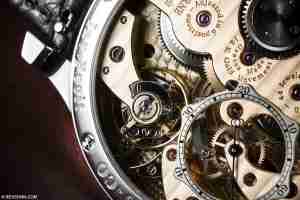 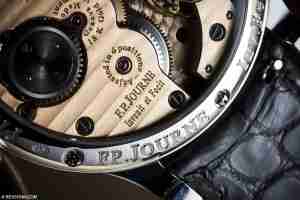 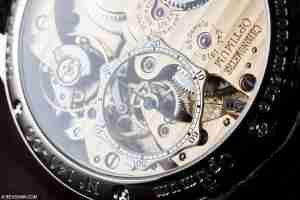 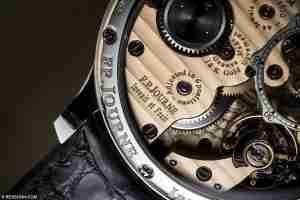 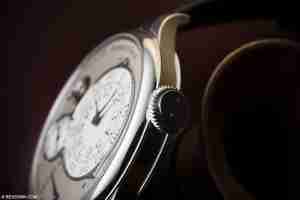 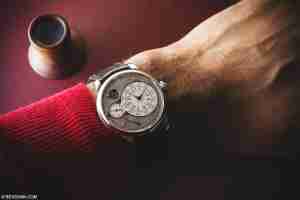 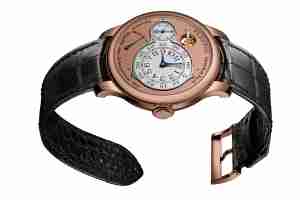 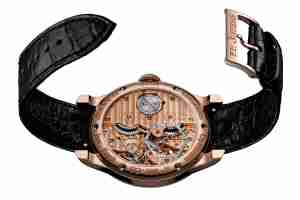 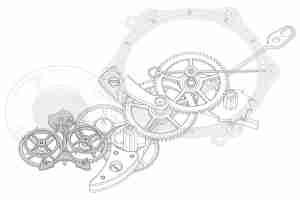