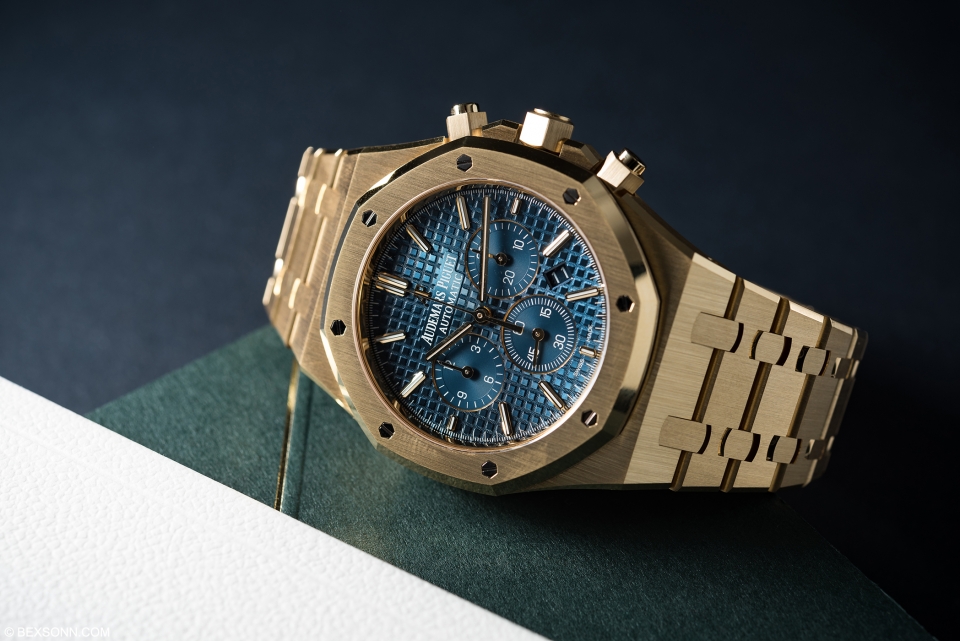 If one thing was evident this year, you could not mistake the emphasis Audemars Piguet has placed on gold and to be more specific yellow gold. Way back in February, we attended  AP’s Yellow Gold party and here we saw many of the yellow-gold timepieces they launched during SIHH. Of those pieces, one of them was this yellow-gold Royal Oak chronograph. We all know what chronographs are useful for, i.e. tracking time over distances at events such as motor racing or horse racing, to mention a few. But what better way to do this than with a Royal Oak chronograph. The Royal Oak is steeped in history and is perhaps one of finest pieces Gerald Genta designed. However, it was designed to make wearing a simple, time only sport steel timepiece elegant but does this still work when a chronograph has been added, it has been up-sized and it’s made using solid gold? Just maybe. 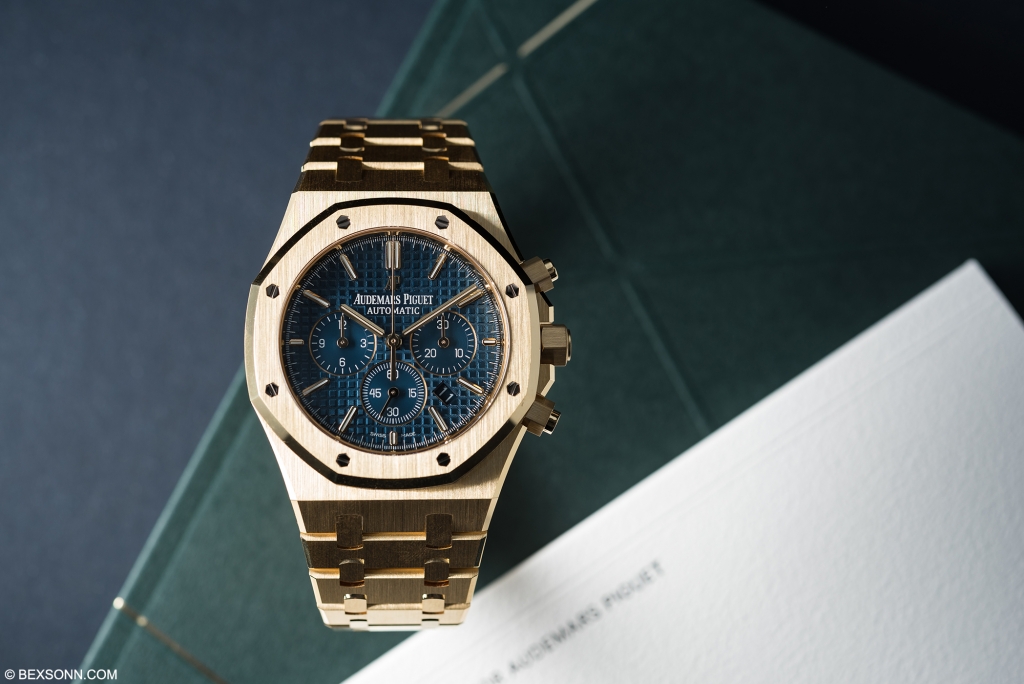 The Royal Oak Chronograph ref. 26320 is nothing new, in fact it first made its début at SIHH 2012 as an update to the ref. 26300 which a good friend of mine, Robert-Jan Broer of Fratellowatches, owned for a while before trading it – personally it was one of my favourite modern chronograph pieces during that time. It had quite a nice balance to it and while the case was perhaps a little thicker than one would’ve liked, it measured below the magical number of 40mm – 39mm to be exact. This new yellow-gold variation of the 26320 measures 41mm in diameter, while this is just a 2mm increase, the difference is noticeable. That said, it seems to work better on the wrist as the proportions, somehow, make it feel slimmer. 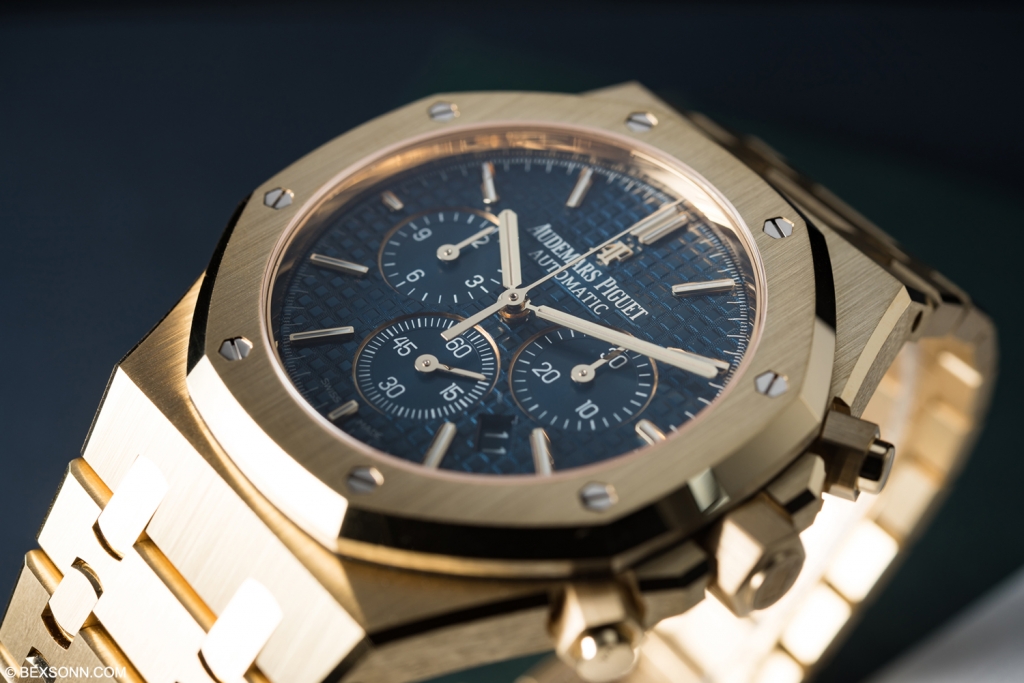 The dial, in typical AP fashion, sports a Grande Tapisserie (hobnail) pattern, which is also known as clou de Paris, three subsidiary chronograph register that features a very thin gold outer ring, matching the case material. The dial makes use of long, inlaid, applied luminous gold hour markers, with a date at 4:30, which actually works well, despite the fact it does impose upon the hobnail pattern. A close-up of the dial reveals  intricacies of its hand turned guillochage, which is created by using an engine lathe and a straight-line machine, the former of which, moves in a circular motion, while the latter moves in straight lines creating this beautiful patterned dial. Beneath the dial is the calibre 2385, an automatic movement, which deploys a column-wheel that is on this occasion hidden behind a solid case back. 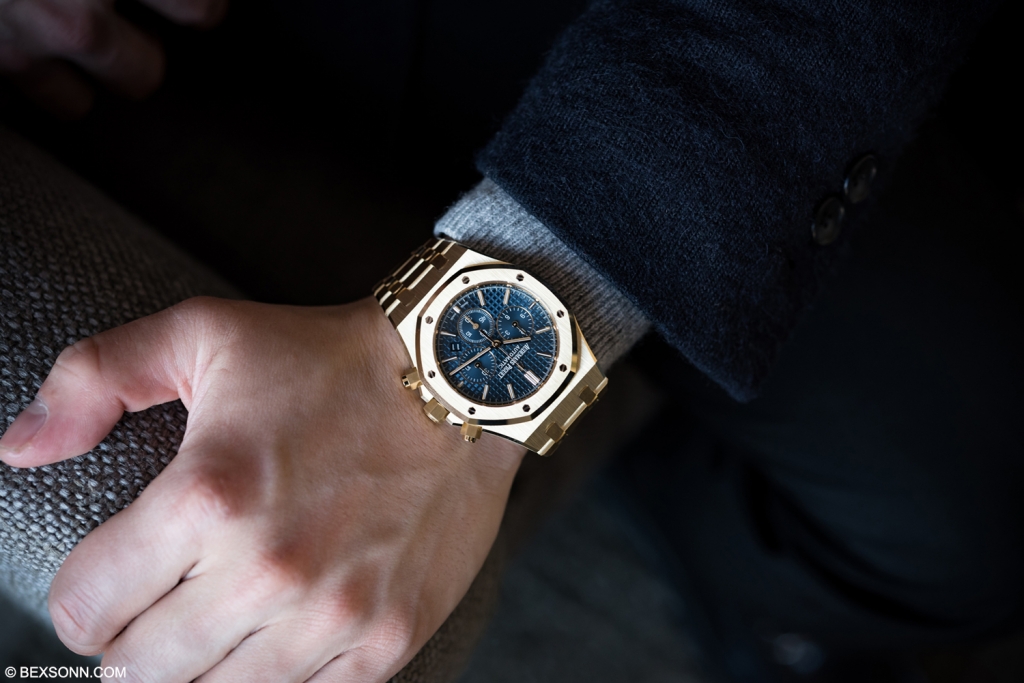 Now, I am completely aware of some people’s angst towards gold wristwatches and I can appreciate their stance but I do believe there is a time and a place for it. While it is true that the reputation a gold timepiece reflects upon its wearer can be seen as quite negative, I believe if executed tastefully, it can work. There is no doubt this Audemars Piguet Royal Oak Chronograph 26320 has been beautifully crafted, however, the stigma attached to such pieces can’t be ignored. Would I wear it? Sure but only with very specific attire. The 41mm Royal Oak Chronograph, lacks a little in the elegance area, which is of course the point; it’s a sports watch that is bold. However, I will say that while the terms gold and sports watch, in the same sentence, do at times appear contradictory but every now and then the likes of AP can produce such a timepiece that breaks the rules.

The Royal Oak Chronograph is available with either a blue dial (as seen in these images) or a silver-toned dial, priced at £41,300. For more information, visit the official Audemars Piguet website. 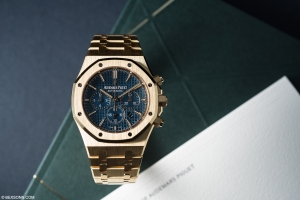 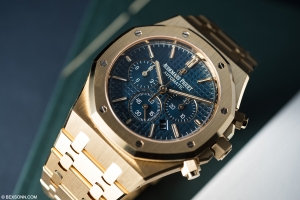 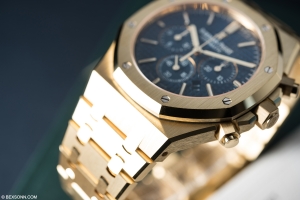 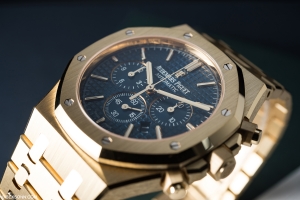 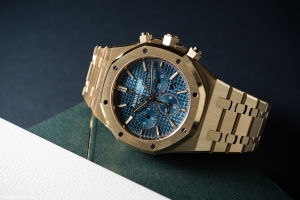 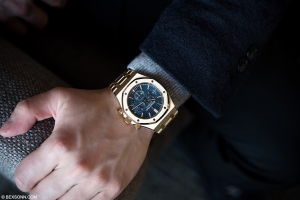