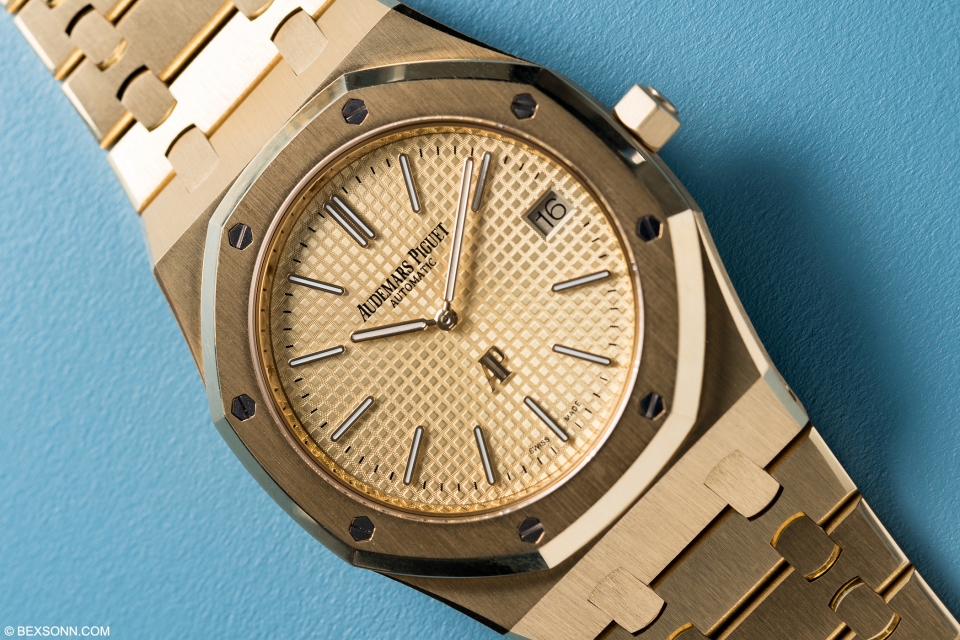 Last year at SIHH, Audemars Piguet, were decidedly contrarian and placed are rather large emphasis on Gold. So much so that just after 2016’s SIHH they threw a large party at Phillips HQ in London and just in case you were wondering that party was dubbed the Yellow-Gold AP Party, which of course we attended. Fast-forward to 2017 and it would appear this theme is still in effect. That said, some would argue that yellow-gold has never been as vogue as it is right now, however, I don’t believe it ever went out of fashion to be honest. Nonetheless, this year at SIHH 2017 the one piece that seemed to have most people excited, me included, was the announcement of the new Royal Oak Extra-Thin ‘Jumbo’ reference 15202, which is a reincarnation of the classic ref. 5402 in yellow-gold that was first released way back in 1977. 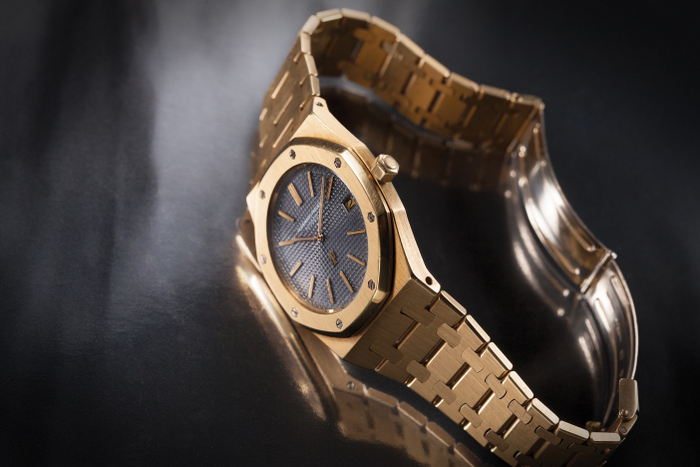 Audemars like celebrating milestones. We know the first ever reference 5402 was released in 1972 and in 1992 AP followed this up with a 20th anniversary piece – the reference 14802, of course by this time some updates had been included too, most notably the exhibition case back. This update arguably departed from the classic Monobloc design, though many still believe the new design can still be considered Monobloc. This anniversary brought about just 280 pieces in yellow gold out of the 1000 produced overall. We also know that in 2012, Audemars introduced the 40th anniversary 15202 in stainless steel and rose-gold that featured the same ultra-thin dimensions of 39mm x 7mm and still housed the same self-winding calibre 2121. Though, the most notable change being the relocation of the AP logo at 6 o’clock from 12. It goes without saying that is was of course a success. 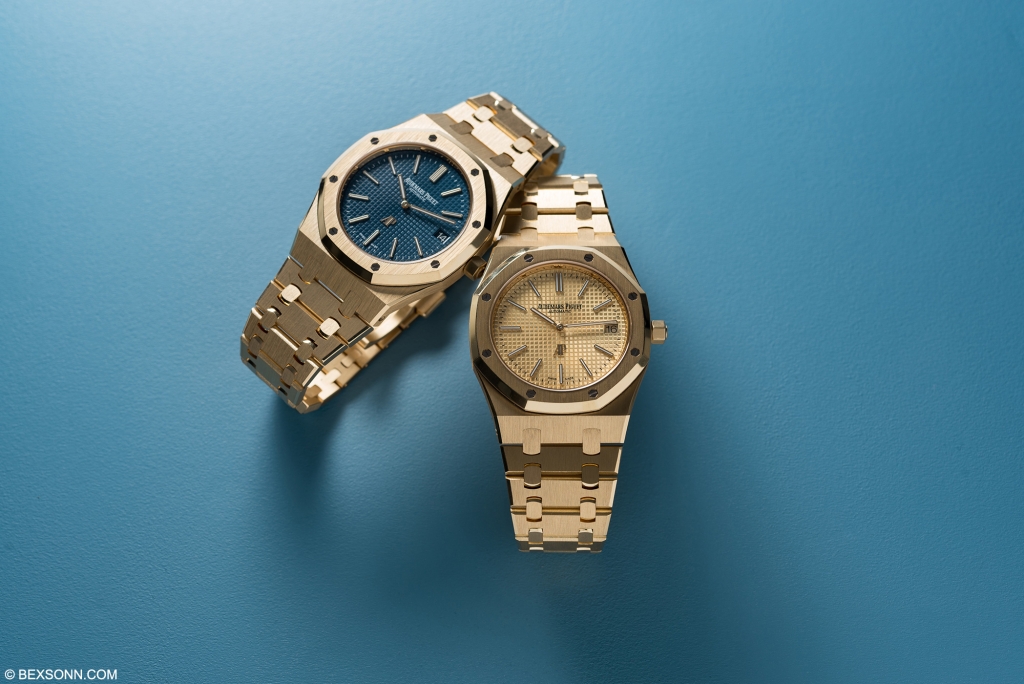 The SIHH 2017 AP Royal Oak Extra-Thin ‘Jumbo’ reference 15202 in 18-carat yellow-gold is much of the same, which is why it is still so popular and also why it is timeless. It is the same iconic and dependable watch it was 40 years ago, albeit with a few tweaks here and there. I think the most interesting fact here about this new 15202 is that this is the first time the ‘Jumbo’ is making an appearance in yellow-gold in some 20 plus years – something that is easily forgotten. 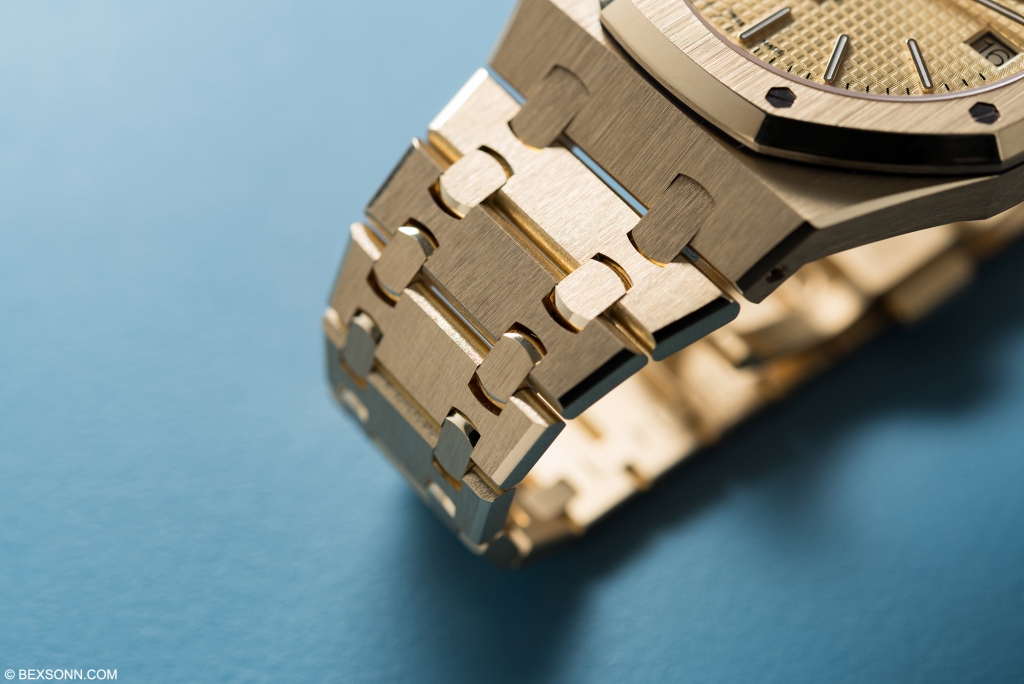 The case on this new yellow-gold RO ‘Jumbo’ is expectedly excellent and measures the same 39mm in diameter, however, 1.1mm has been added to the case depth to accommodate the sapphire exhibition case back. The Genta designed bracelet of the Royal Oak is second to none, with a combination of brushed surfaces and polished bevels, it really showcases the excellence of the manufacture. While the AP folding-clasp is easy to use and the bracelet is extremely comfortable, the weight of the watch, as it is solid gold, is something that one would need to get used to. 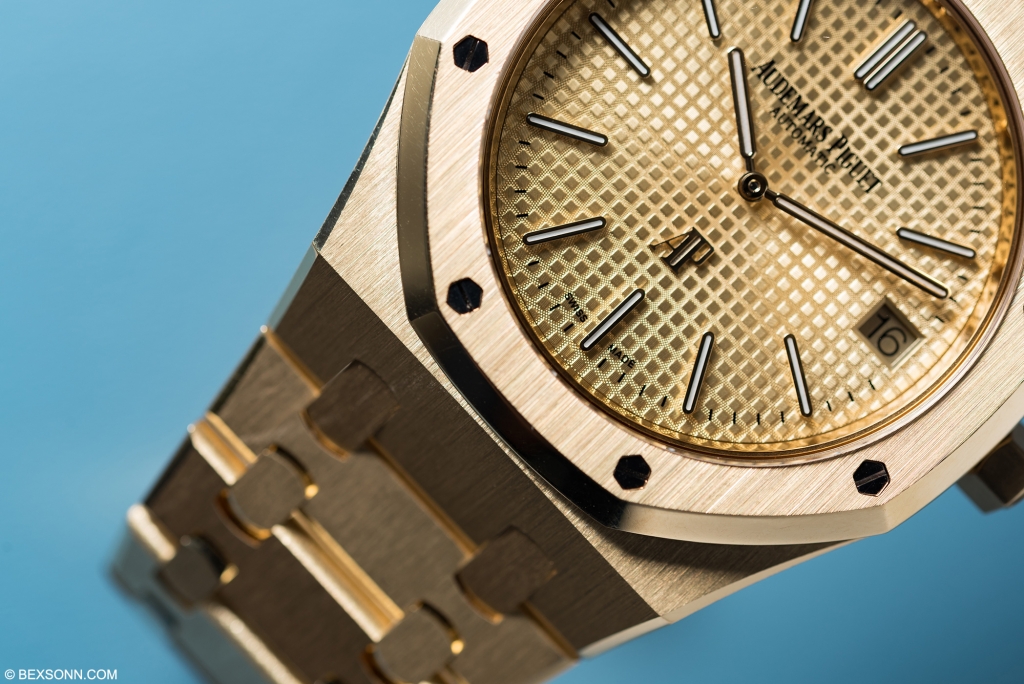 The Audemars Piguet 15202BA features the all familiar petite tappiserie dial, which is one of my favourite aspects of the Royal Oak. The ability for the dial to reflect off different gradients based on different light sources is a joy to behold and it is further emphasised by the warmth of the gold case. That said, the biggest news from the Le Brassus based watch manufacturer is the new pairing of the yellow-gold case with blue petite tappiserie dial. And while we’ve seen a champagne dial on a ‘Jumbo’ before (5402BA), it still looks very, very impressive. The yellow gold applied markers and baton hands are classically in the style of the Royal Oak, filled with luminous material. 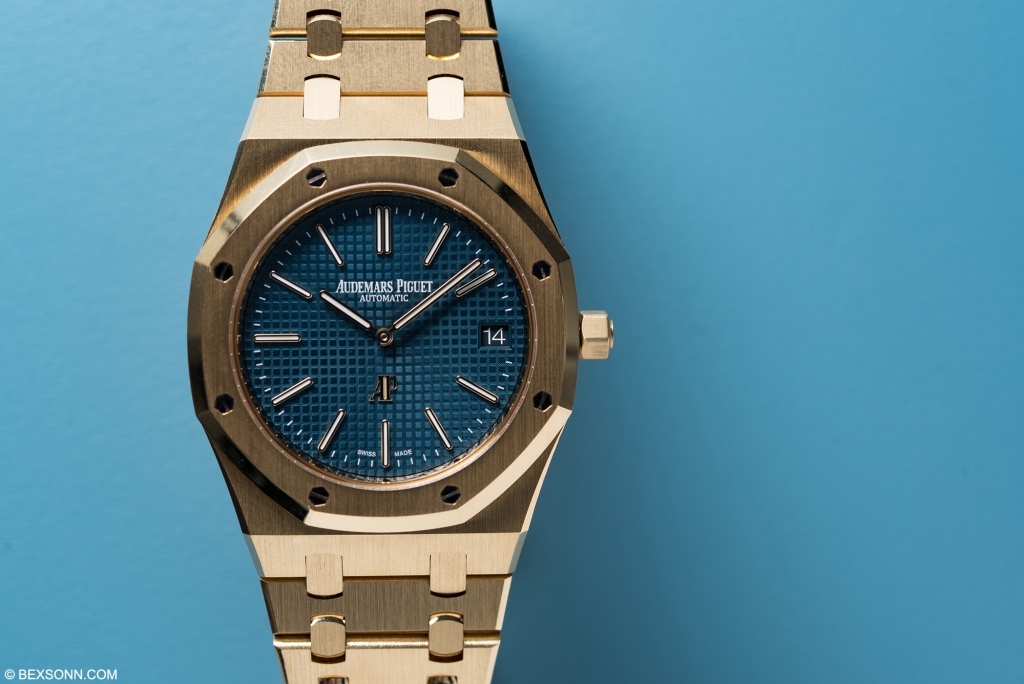 Both dial combinations have been well-executed, with the champagne offering more of an immediate attraction and the blue feeling more classic, despite the fact it has never been done in this fashion before. Another nice touch is the use of a date disc that matches the dial colour, as not to intrude on the flow of the dial. 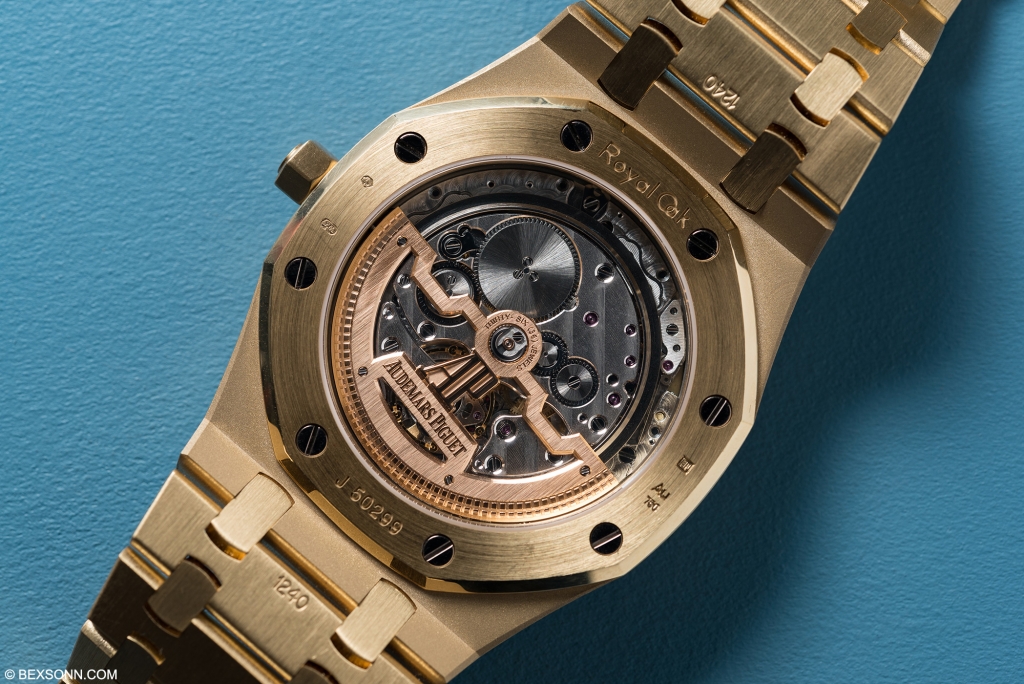 Powered by the self-winding calibre 2121, which was developed by JLC as the calibre 920, half a century ago, it pays tribute to the original Royal Oak model, embodying the distinctive features and extensive finishing techniques that define the world’s first luxury sports watch. Featuring a bidirectional 22k rotor expertly engraved with the coat of arms for the Audemars and Piguet families, it is finished in true haute horlogerie standards with all edges and screw heads bevelled and polished and the familiar Côtes de Genève on the bridges – providing a power reserve of up to 40 hours. 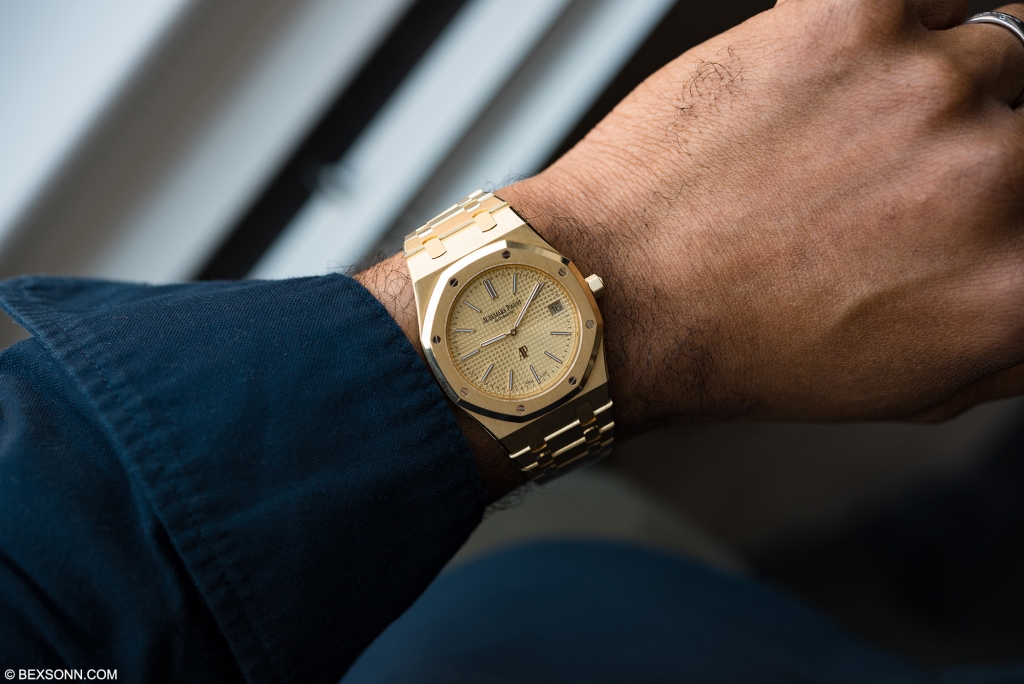 The AP Royal Oak Extra-Thin Jumbo has an air of timelessness to it, which is by and large because of one defining factor: good design. Good design is timeless but this element alone isn’t enough. The brand itself also have to believe in the classic nature of the product too – hence its popularity and longevity. Very few watch brands tend to do this and often we see watches that have been upsized, bloated and tweaked beyond recognition that in time fade, simply because it is designed with a “whatever is in vogue” kind of attitude. The Royal Oak was a bold design, a design that still pays dividends today and one that will still look just as ageless and elegant tomorrow.

The Royal Oak Extra Thin in 18-carat yellow-gold ref. 15202BA, with either a champagne or blue dial, is priced at $55,400. For more information on this new piece, visit the official Audemars Piguet website 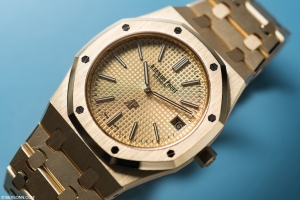 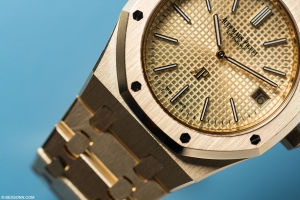 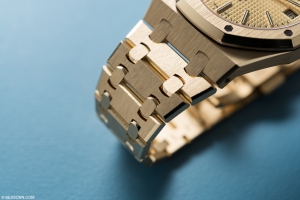 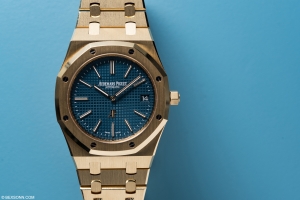 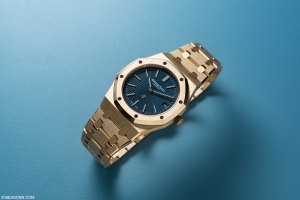 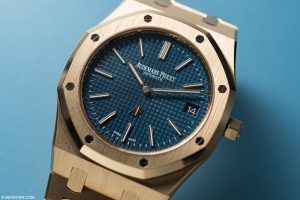 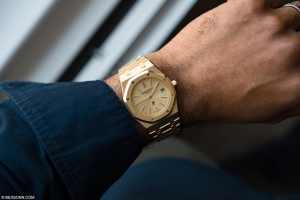 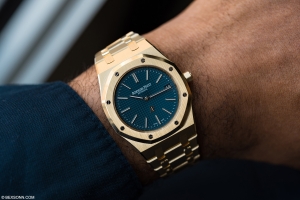 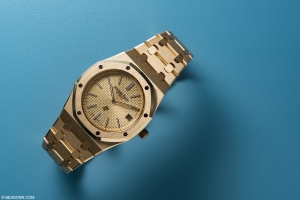 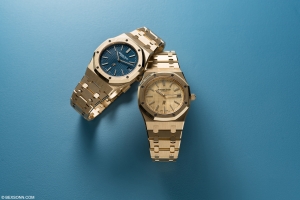 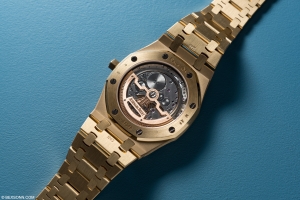 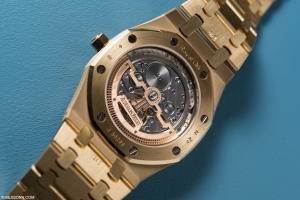 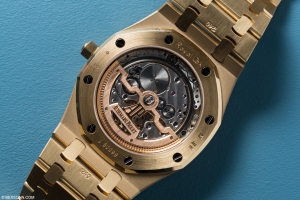 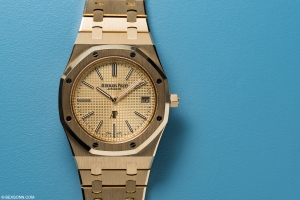 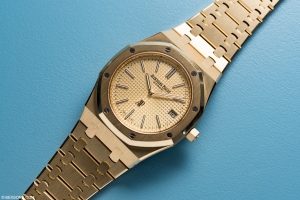 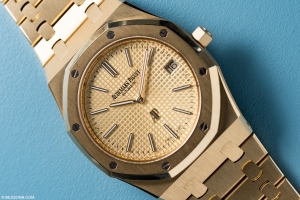