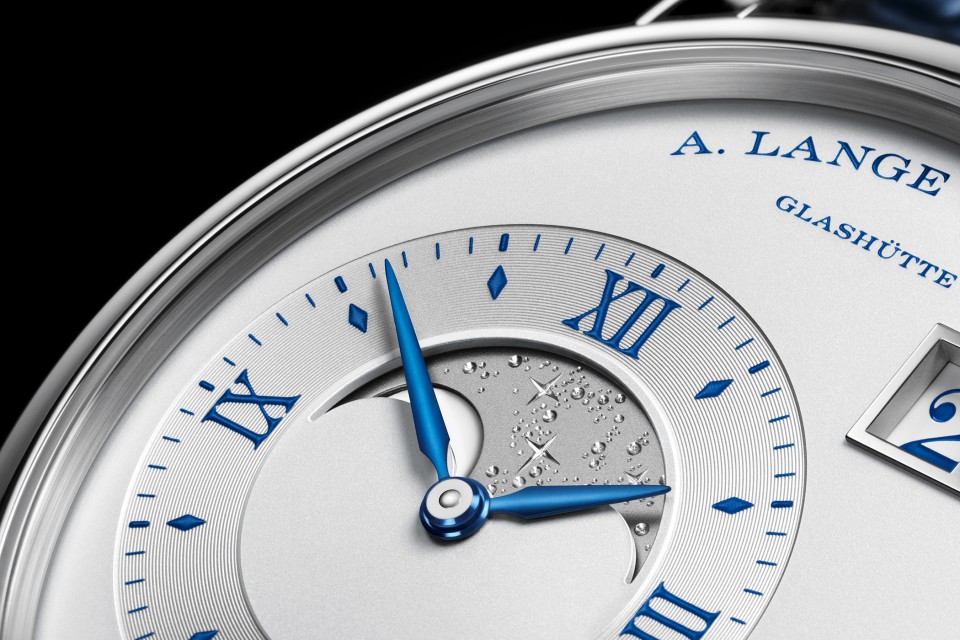 As you will have read last month, A. Lange & Söhne are celebrating 25 years since the launch of the Lange 1 and to co-inside with this, are releasing special limited-edition pieces. Just a couple of days ago, Lange added a second piece to the jubilee edition: The Grand Lange 1 Moonphase. The Grand Lange 1 Moonphase uses the same basic layout and structure of the Lange 1 family but in addition features a moon phase complication. Not only is this new 25th anniversary Grande Lange 1 stunning but also it is designed to remain accurate for over 100 years.

The Grand Lange 1 Moonphase is aesthetically simple but technically, it is very sophisticated. The Moonphase display is connected with the hour-wheel continuum. As a result, it is constantly in motion, just like the moon itself. The increments are so small they cannot be detected by the naked eye. Because the motion is so slow it allows the moon phase to be turned very precisely, thus enabling the moon phase display to indicate the time that elapses from new moon to new moon with an accuracy of 99.9978 percent.  The average synodic month lasts 29 days, 12 hours, 44 minutes, and 3 seconds. For the sake of simplicity, most classic moon-phase displays round this cycle down to 29.5 days. The resulting deviation of 44 minutes and 3 seconds per lunation adds up to one day in merely two and a half years.

The Grand Lange 1 Moonphase features a seven-gear transmission, which reduces the deviation per cycle to less than one minute. Once correctly set, and assuming that the watch runs continuously, the display would only have to be corrected by one day every 122.6 years. Moreover, the display can be adjusted separately by using an adjuster incorporated into the case band between 7 and 8 o’clock.

The 41mm solid white-gold case houses the manufacture calibre L095.3, which has been lavishing decorated. The untreated German silver ¾ plate displays the Glashütte ribbing that affords a view of the screw balance with a balance spring developed and manufactured in-house. This is held in place by a hand-engraved balance cock with a special engraving: the number “25” in the Lange-typical outsize date window, surrounded by a floral pattern. All engraved recesses are accentuated with a blue coating.

The new 25th anniversary Grand Lange 1 Moonphase is technically sound but is also just as aesthetically pleasing. Combining an off-centre dial, the oversized date and a lavishly finished manufacture calibre, the Grande Lange 1 Moon Phase features all of the iconic hallmarks of A. Lange & Söhne’s most famous timepiece family.  The moon phase disc itself is made entirely out of white-gold, which has been hand-engraved with six stars and numerous small dots to depict a starry night sky. Together with an inlaid golden moon, that adds a three-dimensional effect. The argenté- coloured dial made of solid silver with blue-printed numbers, indices and a blue date and a colour-coordinated blue alligator leather strap with grey stitching.