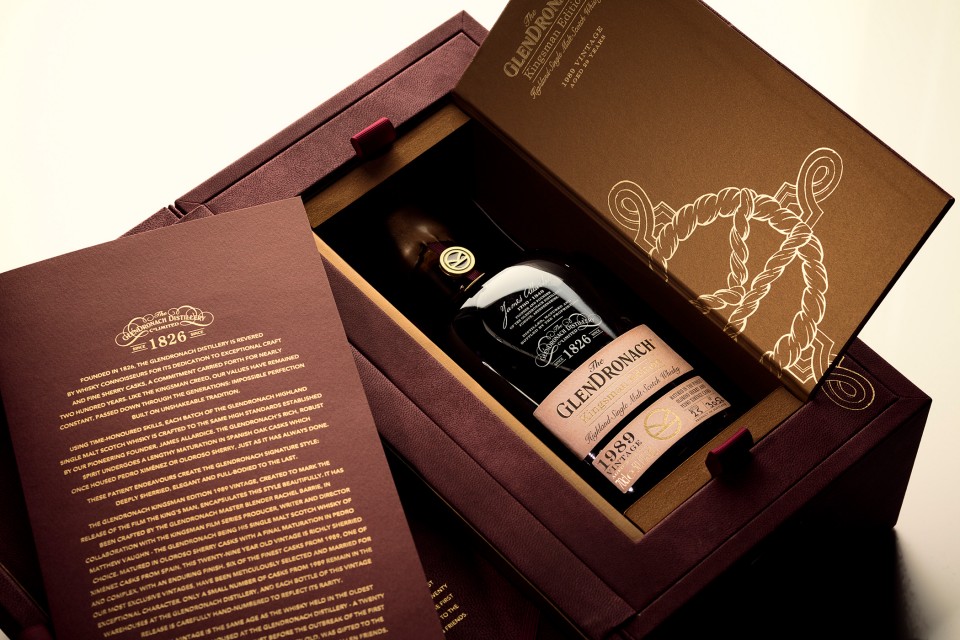 The GlenDronach Distillery is pleased to announce the exclusive release of The GlenDronach Kingsman Edition 1989 Vintage, the second expression created in collaboration with Matthew Vaughn, to mark the upcoming release of “The King’s Man” by 20th Century Studios and MARV, coming to theatres soon.

The GlenDronach Kingsman Edition 1989 Vintage has been expertly crafted by Master Blender Dr. Rachel Barrie, in collaboration with the Kingsman film franchise director Matthew Vaughn, from a selection of just six of the finest casks from this rare vintage year. Matured in Oloroso sherry casks with a final maturation in Pedro Ximénez casks from Spain, this twenty-nine-year-old Single Malt has an exceptional depth of character, truly befitting a Kingsman.

“The King’s Man” is set during World War 1 and invites audiences to discover the origins of the ‘very first independent intelligence agency’. As a collection of history’s worst tyrants and criminal masterminds gather to plot a war to wipe out millions, one man must race against time to stop them. Like the Kingsman creed, The GlenDronach’s values of dedication and integrity have remained constant, passed down through the generations; impossible perfection built on unshakeable tradition.

This exceptional 1989 vintage is inspired by the oldest bottle of whisky housed at The GlenDronach Distillery – a twenty-nine year-old whisky bottled in 1913, just before the outbreak of the first World War. Three friends had each purchased a bottle before leaving for war, vowing to open them together on their return. Tragically, only one of them returned home. Having never opened his bottle, his family later gifted it to the distillery, where it remains unopened and displayed in remembrance of fallen friends.

Kingsman Film Franchise Director, Matthew Vaughn said:  “There is an important line which says, “Reputation is what others think of you, character is what you are”. Strength of character and dedication to upholding the highest values perfectly encapsulates the true spirit of both the Kingsman agency and The GlenDronach Distillery. I hope Kingsman fans around the world will enjoy this Single Malt as much as I enjoyed partnering with Rachel Barrie and The GlenDronach to create it.”

Dr. Rachel Barrie, Master Blender at The GlenDronach Distillery, commented:  “Working closely with Matthew, I have selected casks of the most exceptional character for this rare 1989 Vintage, with smouldering aromas of dark fruits and sherry-soaked walnuts, vintage leather and cedar wood. On the palate, dense autumn fruits meld with date, fig and treacle, before rolling into black winter truffle and cocoa. In the exceptionally long finish, notes of blackberry, tobacco leaf and date oil linger to conclude the rich tasting experience.

3,052 bottles have been made available to purchase and all have been labelled, numbered and wax-sealed by hand, each adorned with an iconic, bespoke Kingsman insignia. The luxurious gift box also bears the signatures of both Dr. Rachel Barrie and Matthew Vaughn and we can’t wait to get our hands on a sample to share our tasting notes on this latest Kingsman expression.

The GlenDronach Kingsman Edition 1989 Vintage will be highly collectible for both whisky connoisseurs and Kingsman film fans around the world. This limited edition bottling will be available from specialist retailers worldwide from 1st September at the recommended retail price of £775. For more information visit glendronachdistillery.com.