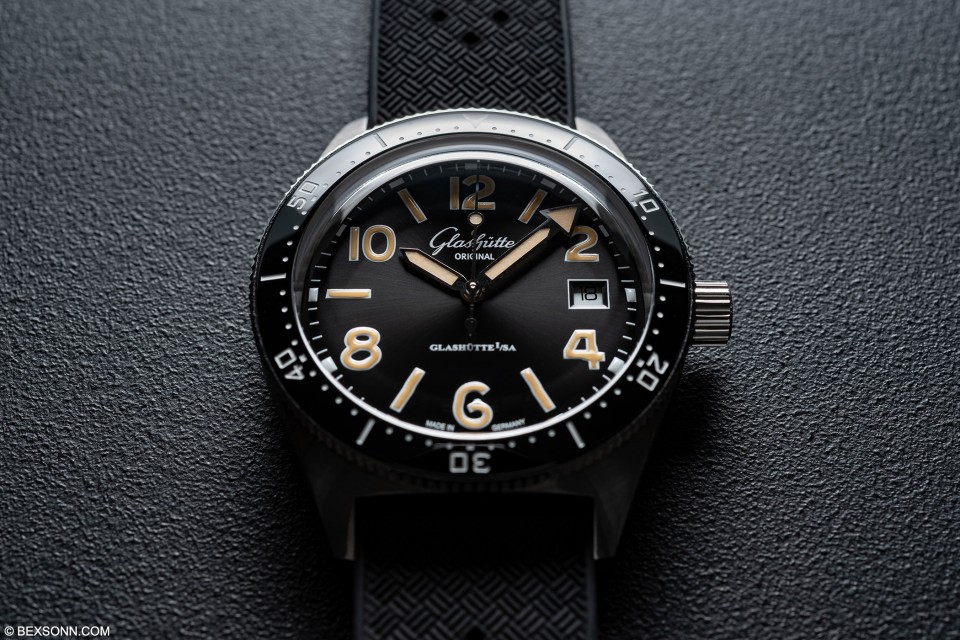 Over the past few years we’ve seen an ongoing trend of watch manufacturers re-create watches they made decades ago. And while there are no signs of this stopping anytime soon, something you’ll likely have heard me say previously is that not many get this balance just right. While Baselworld was of course a rather short and sweet affair for us, it was noticeable the Swatch Group was missing. That said, just last month The Swatch Group revealed some novelties for 2019 and among the pieces introduced, a vintage-inspired watch from Glashütte Original piqued our interest. It’s not often that a watch manufacturer from the green, rolling hills of Glashütte introduces a vintage-inspired timepiece, simply because not many of them have continuously been around that long. But reaching into the archives is something that Glashütte Original can do and in doing so have recreated the SeaQ, which is part of their new range called “Spezialist”.

As mentioned, the new SeaQ was inspired by a wristwatch made by Glashütte Original back in 1969. To get a full understanding as to how a high end German watch manufacturer such as this have created a somewhat simple dive watch, you’ll have to go back to the time that Glashütte Original was under control of the government of the German Democratic Republic (GDR) or more widely known as East Germany. The Glashütter Uhrenbetriebe, as Glashütte Original was known at that time, wasn’t a watch manufacturer focused on producing high-end watches as it is today but more one that made watches for specific needs. Back then, G.U.B made accessible and functional watches of which one of those models was the Glashütte Spezimatic Type RP TS 200, the blueprint for the new SeaQ collection. It was a utilitarian watch that was part of the diverse history of Glashütte.

Some 50-years on, Glashütte Original have released a limited edition tribute SeaQ (the SeaQ 1969), a watch that is almost identical to the piece made in 1969 and also another example of the SeaQ which will be unlimited. The limited edition SeaQ 1969, the Saxon manufactory takes up this tradition, citing the historic inscription on the black dial and the number of jewels. The historical model (as seen above) read, “Rubies 26” represents the promise of quality associated at the time with the Spezimatic calibre 75. While “Shockproof” referred to the construction of the diver’s watch, renowned even then for its particularly stable design.

The limited edition SeaQ sports green hands, while faux patina has been used on the Arabic numerals and indexes. The SeaQ 1969 is available in a limited edition of 69 pieces; the limited edition number can be found on the engraved case back. The sunburst black dial of the unlimited version of the SeaQ features Arabic numerals, indexes and hands accentuated with a touch of faux patina. The engravings on the case back offer decorative enhancement in the form of the trident maritime symbol, the Glashütte Original Double-G and 20 waves, which symbolise the 20 bar water resistance.

The case of both SeaQ models measure a rather restraint 39.5mm and like all dive watches features a unidirectional, counter-clockwise rotating bezel with perceptible clicks, enabling certain determination of the dive time. The scratch-resistant demarcated ceramic bezel has been fitted with a Super-LumiNova coated triangle marking the dive start time.

The original SeaQ was housed in the iconic Spezimatic calibre 75 but trying to carry that name over to this new SeaQ model just wouldn’t have worked – hence the reason this name is absent from the dial. That said, both models of the SeaQ do use an adapted version of the award-winning calibre 39, which has been modified to meet ISO standards for a divers watch. The calibre 39-11 movement features hours, minutes and seconds (with second-stop), the all-important date mechanism and has a 40-hours power reserve.

The SeaQ 1969 comes with two alternative strap versions: one with a striking embossed rubber strap, the other with a water-resistant nylon mesh strap. While the SeaQ is offered with three strap versions each: a stable, flat stainless steel bracelet with 8-step fine adjustment mechanism; a robust, water-resistant nylon mesh strap, and a distinctive rubber strap with embossed design all guarantee a secure fit on the wrist.

The Glashütte Original SeaQ is an absolutely stunning watch, it is very reminiscent of early dive watches that were rather slim. The 39.5mm case, in my humble opinion, is perfect and though many may think it is a bit small, G.O have also catered to those needs by also offering the larger 43.2mm SeaQ Panorama Date, which is also part of the new Spezialist range. The design of the SeaQ and SeaQ 1969 really captures the lighter look of earlier dive watches but even more impressive is that this hasn’t had a bearing on the dive depth rating of 20 bar (approx. 200m). All-in-all I think the SeaQ and SeaQ 1969 is a masterstroke from Glashütte Original, it is so well executed, however, I must point out that all this goodness does come at a cost – starting at £7,000 to be exact. That said, it is a rugged yet charmingly comfortable timepiece to wear.