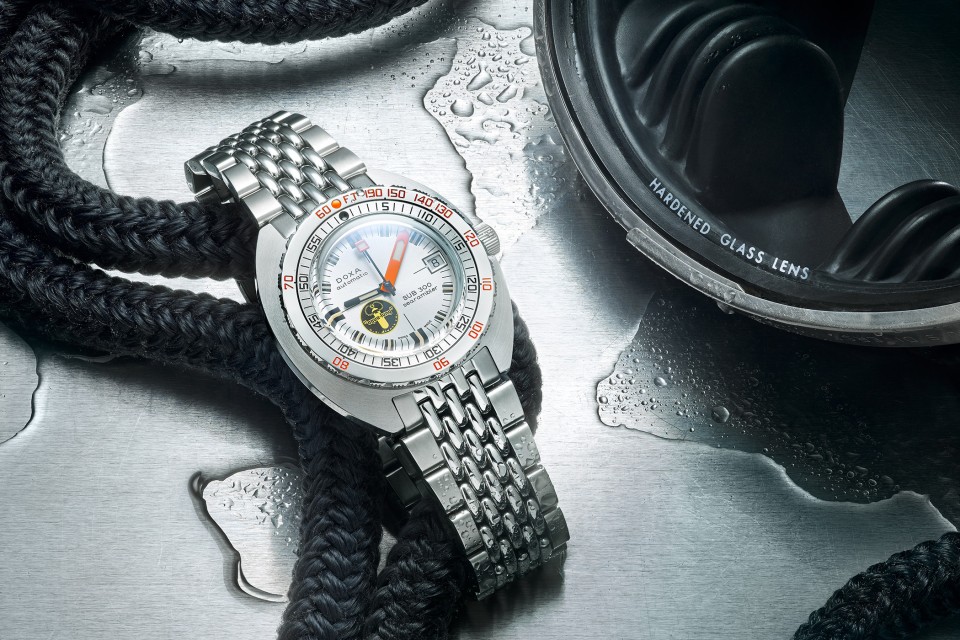 Doxa isn’t a brand we highlight often but over 50 years ago, they introduced their SUB 300 model at a little known watch fair called Basel. There was an Orange dialled release, which was designated the moniker ‘Professional’, a Black dialled iteration dubbed the ‘Sharkhunter’ and Silver dial version that was given the title ‘Searambler’. Doxa even went a step further, releasing the SUB 300T, which sported the more well-known yellow dial, carry the name ‘Divingstar’ – this sported a slightly larger case, dial and bezel. That said, of late we’ve seen watch brands issuing limited remakes of what made them famous in their earlier years, Doxa have done quite a bit of this in the past to great success too and while diehard Doxa aficionados may bemoan these re-issues, one has to admit – they’ve been very tastefully done. Just a couple of days ago, Doxa announced another limited-edition remake: the Doxa SUB 300 Searambler Silver Lung, that I have to admit, looks stunning. 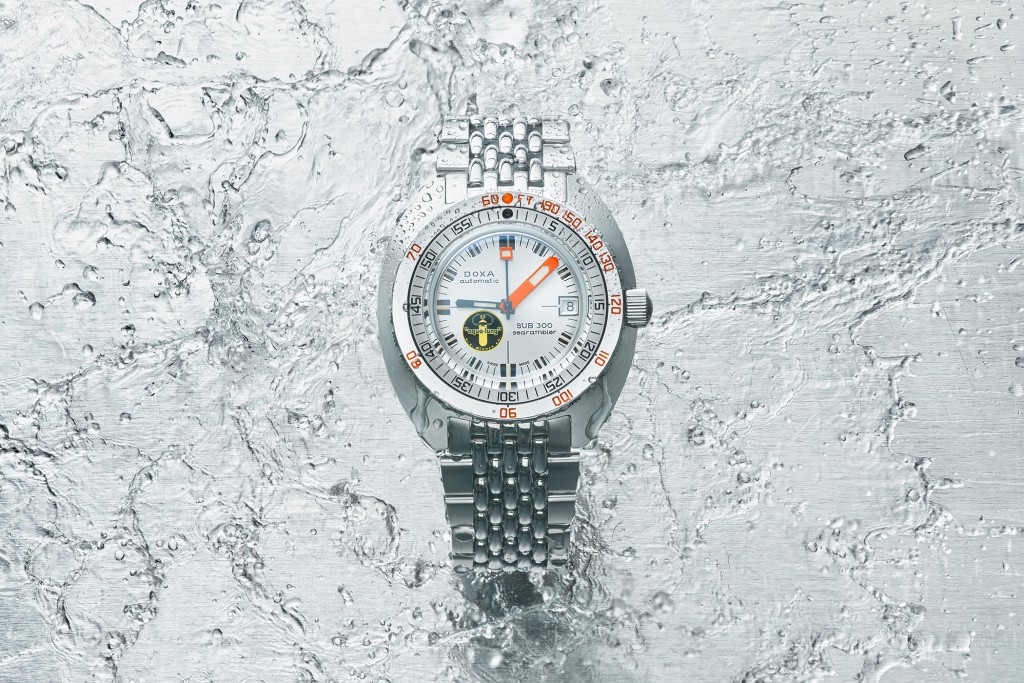 The SUB 300 Searambler ‘Silver Lung’ is the successor to the very successful and fastest-selling Doxa of all time: the 2017 SUB 300 ‘Black Lung’, designed in collaboration between Doxa and renowned diving gear maker Aqua Lung. The Black Lung served as a blueprint to this very special SUB 300 and is a faithful homage to a rare, and highly collectible silver-dial vintage Doxa SUB created in partnership with Aqua Lung in 1967.

When the Black Lung was delivered back in 2017, it was done so with Doxa’s iconic ‘Professional’ orange dial. The Silver Lung, however, is fixed with another of Doxa’s signature dials: the brand’s “Searambler”, which features a satin brushed silver dial. The introduction of the SUB 300 ‘Silver Lung’ continues the yearlong 50th anniversary celebration for Doxa Watches, whose pioneering SUB would first plumb the ocean depths in 1967 as the first purpose-built dive watch for the emerging recreational scuba diving market. Loved for its stark contrasting orange dial and professional-grade build quality, the SUB became the benchmark against which all other dive watches were measured, and ultimately won the approval of the pioneers of modern diving. 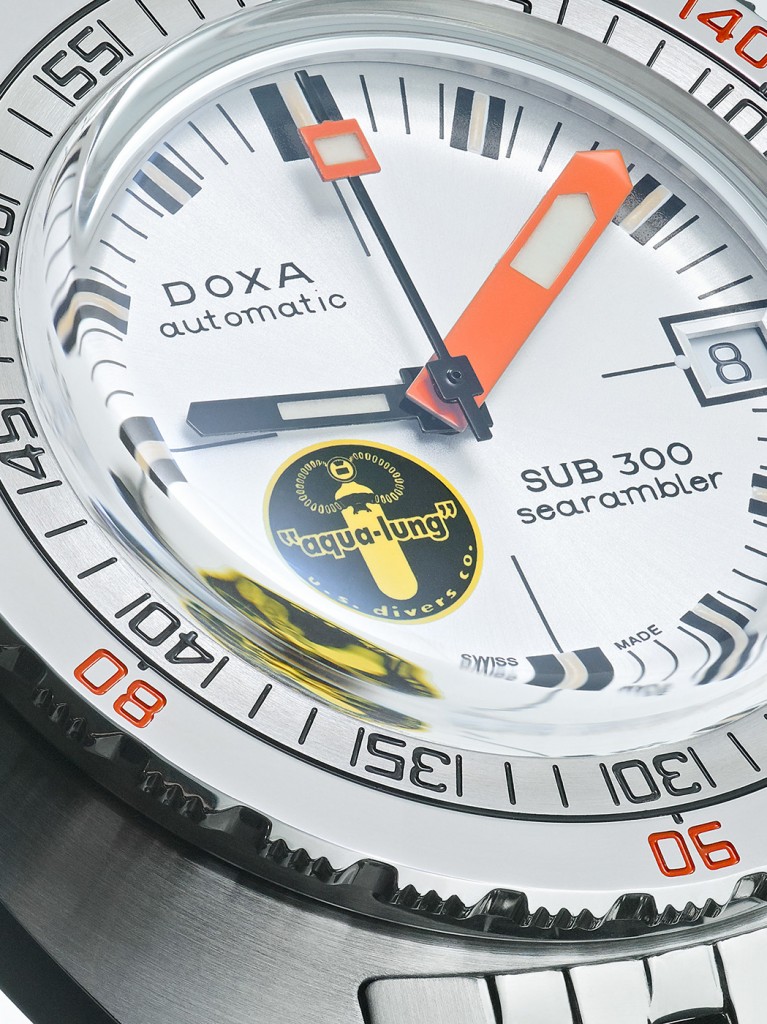 In addition to celebrating Doxa’s 50th anniversary, the ‘Silver Lung’ also marks the continued celebration of Aqua Lung’s 75th anniversary, which began in 1943, upon the development of the world’s first self-contained underwater breathing apparatus, dubbed “aqua-lung.”

The original SUB 300 case was machined from a solid block of stainless steel and the modern Silver Lung special edition is no different – measuring 42.5 mm in diameter, by 13.4 mm thick. At the heart of this new edition is a chronometer-grade ETA 2824-2 automatic calibre. Adding to the overall vintage look and feel of this new limited release ‘Silver Lung’ is a generously domed bubble sapphire crystal and the famed stainless steel “beads of rice” bracelet which tapers to an integrated wetsuit extension. However, the pièce de résistance – in my humble opinion – has to be the serrated, unidirectional timing bezel, which also displays a patented Doxa innovation: an integrated “no deco” scale, engraved in orange, per the US Navy’s maximum no-decompression limits for safe recreational diving. 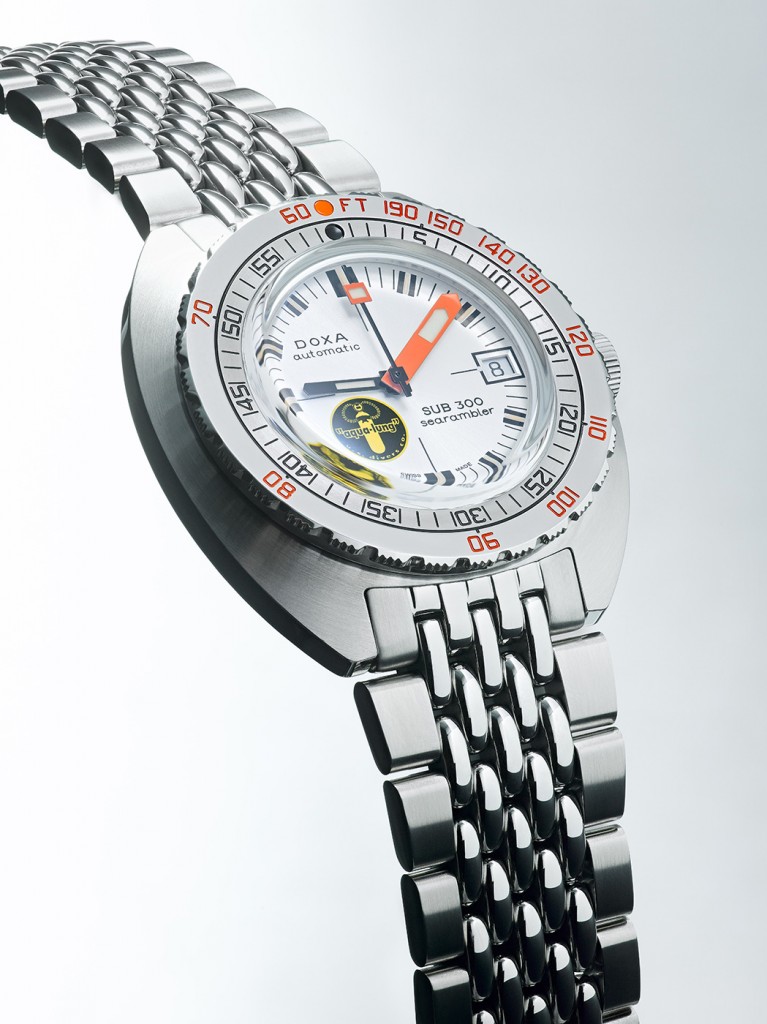 While I’ve personally not highlighted many Doxa SUB 300’s, needless to say I’ve handle a few original examples from the 60s in my time and this 50th anniversary ‘Silver Lung’ limited edition is a rather charming affair. The orange accents, clean appearance and C-shape case are all things to admire and the fact it has stayed as true as possible to the original while incorporating contemporary elements, is not something many watch brands get right. Though the debate will still go on about the most favoured SUB 300, there’s no doubt this piece will be among them.

Limited to 300 pieces, the Doxa SUB 300 “Silver Lung” can be pre-ordered exclusively from Doxa Watches for a price of $2,190 instead of the regular price of $2,590. It is anticipated to ship in August of this year.